A mountaintop is said to be one of the most romantic places in the world to pop the question. 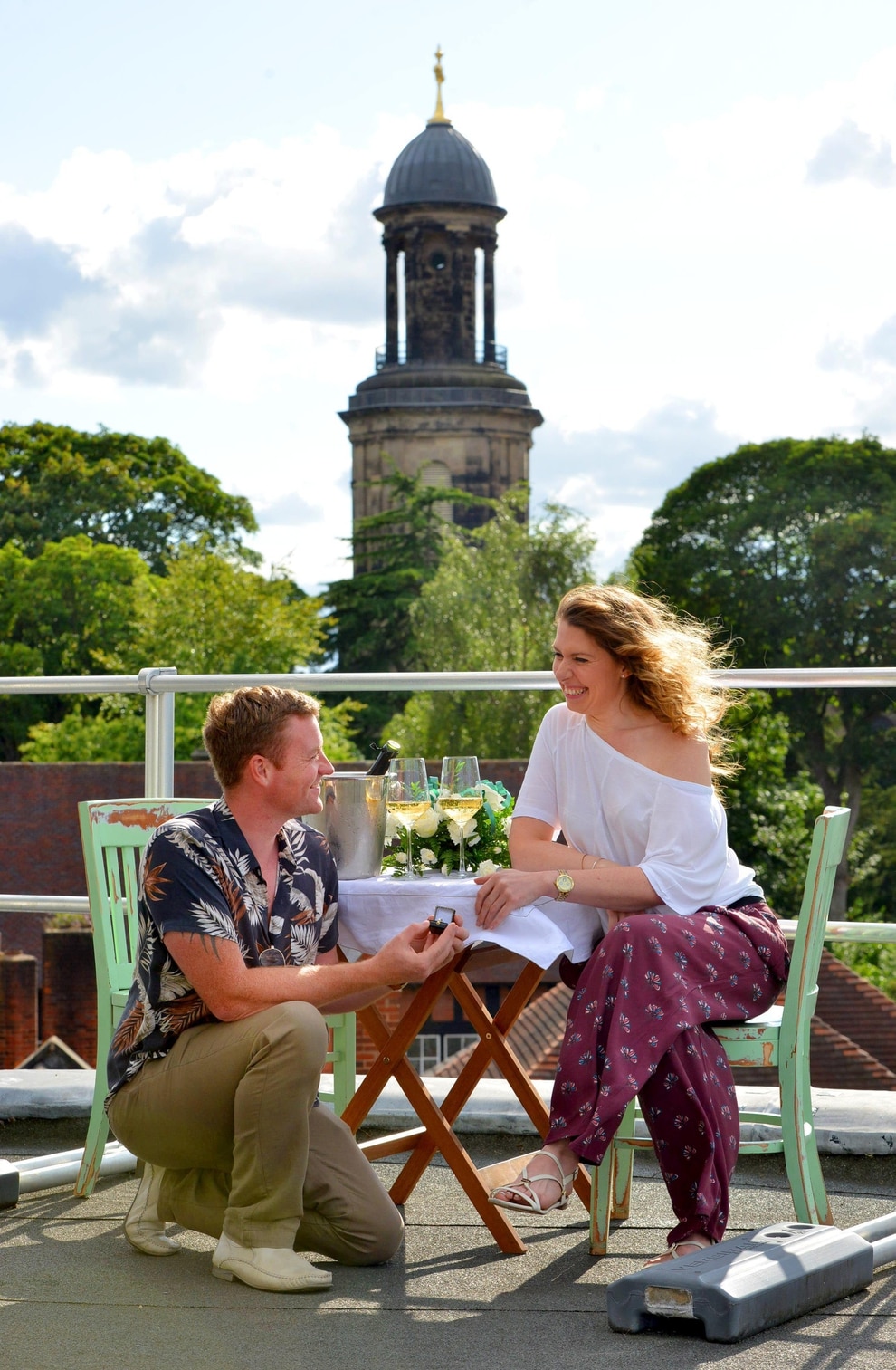 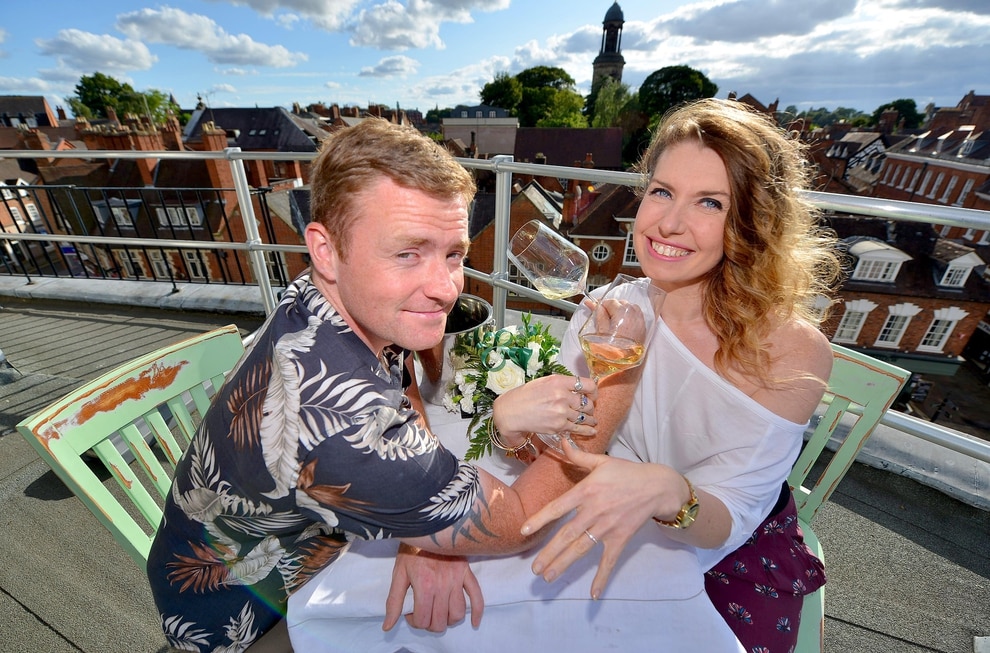 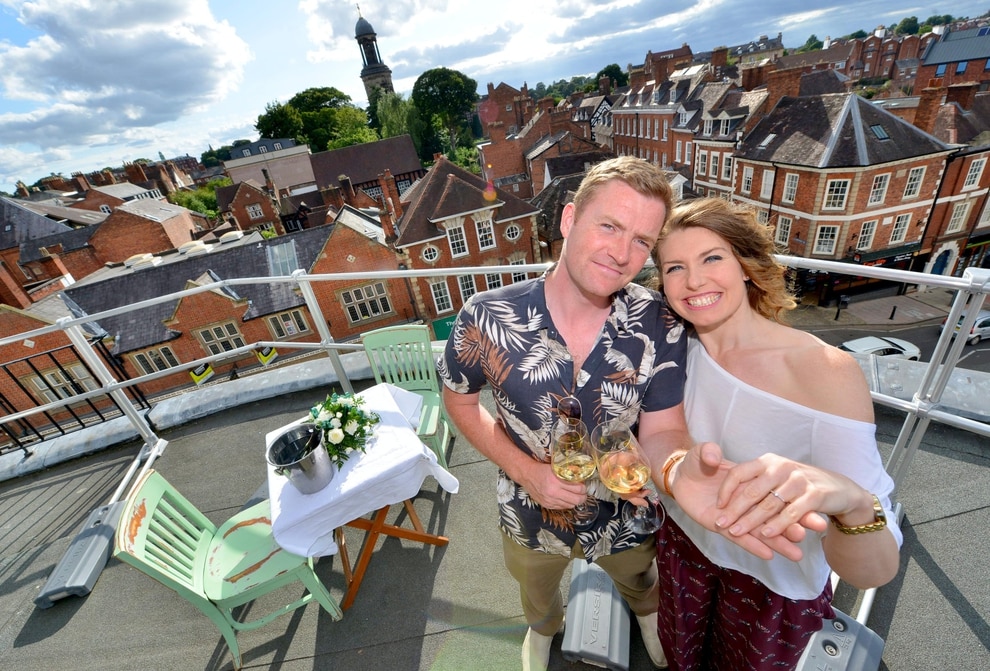 But for one Shrewsbury man the rooftop of the town’s Market Hall was the perfect setting to get down on one knee and propose to his girlfriend.

And traders and staff from the Market Hall, where the couple are frequent customers, helped to create a romantic scene by setting up a table and chairs on the roof complete with flowers and champagne on ice.

James Hinch kept his plans top secret from girlfriend Sandra Phillips whom he lured to the market with the ruse of going to The Quarry Park for an evening picnic.

As they passed the Market Hall building, in Claremont Street, he suggested they pop inside where they were whisked up to the rooftop in a lift by market supervisor Kevin Goss.

“I don’t know where the idea came from to use the roof. It just popped into my head,” said James, 35.

“We moved to Shrewsbury from Dublin three-and-a-half years ago and fell in love with the market straight away.

“We’d been to an event on the roof-top and it was amazing. You can see right across Shrewsbury and I thought it would be a great place to propose.

“The market arranged everything. The champagne came from Iron and Rose and the flowers from Lin the florist. And we brought our own picnic which included prawns and strawberries from the market as well.

“Sandra was confused about why we were going up in the lift. When we got to the top, she saw the table and I went straight into the proposal. She said ‘yes’ and cried for a few minutes.”

Sandra, 38, who works as manager for Wedding World in The Parade Shopping Centre, said she hadn’t a clue what James had been planning.

“I saw the table set with champagne and flowers. When he knelt down and put the ring on the table I got emotional. We spent over two hours on the roof enjoying the champagne and the picnic. It was absolutely fantastic, amazing. I couldn’t believe it.”

The couple, who are originally from Dublin and have been together for 10 years, moved to Shrewsbury when James, an infantryman with the Royal Irish Regiment, was posted to Ternhill Barracks, Market Drayton.

They soon fell in love with Shrewsbury now plan to wed in the town which they liken to living in the Temple Bar cultural area of Dublin.

Market facilities manager Kate Gittins said: “I’ve been asked many things in my time but never dreamt that anyone would wish to propose on the roof of the Market Hall. I was delighted at the prospect and promised that we would do everything we could to facilitate this unusual request."