Former midfielder McNally recalled the ‘infectious smile’ of ‘Bomber’ Williams, the right-back with whom he progressed through the Town youth ranks into the first team in the early 1980s.

Williams, who died after a battle with illness, was a firm fans’ favourite at Gay Meadow. He made 269 appearances for Town having made his debut as a 17-year-old in the League Cup in 1981 not long after leaving Charlton School in Telford.

“It was a shock,” said former midfielder McNally. “I was very lucky, I had the privilege to come through the ranks alongside Wayne.

“He was a smashing fella, a really lovely guy. He always had a smile on his face, his smile was infectious.

“When you went out to play he would give you 100 per cent.

“We’d call him Bomber because he’d bomb on down the wing from full-back.

“You used to think ‘how the heck has he crossed that ball in when he made the tackle in our six yard box to win the ball?’ It was always with a wry smile – ‘that’s Bomber’.

“He was a lovely character to have in the changing rooms. He was a very caring guy. He could have a fun, a great team member to have.

“He’s one that the manager would know he would give his absolute best. He was very consistent, it was a big attribute.

“Defending-wise, for a lad not much bigger than me, he was so solid. He could put a tackle in. He was just what we needed in the second tier at that time.

“I just remember the infectious smile, shouting ‘Bomber’ as he motored up the wing.

“I was speaking to Gary Hackett and we were reminiscing when he crossed for Gary Stevens to head for Colin Robinson to score against Ipswich in the Cup. Typical Wayne.”

The defender left for Northampton Town and also played for Walsall. He had a loan deal at hometown club Telford United.

Williams lived in Shawbirch and had a spell as assistant manager at non-league Shawbury United.

When McNally took over as AFC Telford United’s first manager as the phoenix club rose from the ashes in 2014, Williams was one of the first one of the phone offering his services.

Williams, McNally and goalkeeper Steve Perks were the local trio in Town’s ranks and played the best part of 700 league games between themselves in the second tie.

“It’s quite amazing, that’s what football is about, there’s a close affiliation with the fans,” said McNally. 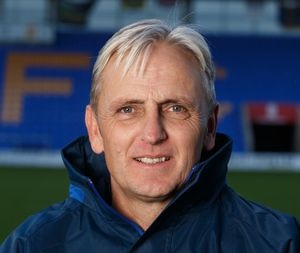 Chancellor warns of lockdown ‘economic damage’ when pressed over circuit-breaker

'On the brink': Tougher restrictions warning for Shropshire as Covid case rate continues to climb

Andy Richardson: Though Christmas will still be rubbish, help is at hand

How the Poppy Appeal helps veterans Battle Back from adversity

Chancellor warns of lockdown ‘economic damage’ when pressed over circuit-breaker

Sturgeon to give update on Scotland’s temporary coronavirus restrictions

French militant group and mosque to close after teacher’s killing