Peter Rhodes on a butterfly bonanza, Apollo musings and a star speaking up for loyalty

IN the next few weeks the gardens and meadows of Britain will become a blaze of colour as millions of painted-lady butterflies arrive from sunnier climes. Despite Brexit.

HELEN Skelton-Myler, the Countryfile (BBC1) presenter, says the BBC should not take away free TV licences from the over-75s because "they are the most loyal audience." What a sweet, old-fashioned view she takes. As any banker, insurance salesman or television bean-counter could tell her, these days, "loyal customer" means "mug."

THE city council in Berkeley, California, is "degendering" its official language. Employees are advised to use "they" rather than "he" or "she" while "manhole becomes "maintenance hole." Interestingly, a councillor promoting the change is one Rigel Robinson. You see the problem? Why should anyone with such a gender-specific surname tell others to start referring to maintenance holes? It is surely time for a name-change, Mr Robinoffspring.

IN this Apollo 11 anniversary week, I watched Apollo 13, the excellent 1995 Tom Hanks film about the flight of the doomed spacecraft in 1970. Through courage, calmness and old-fashioned maths, Apollo 13 survived an explosion and was nursed back to Earth. I loved the sequences in Mission Control, Houston, when the boffins turned away from their primitive computers to work out the re-entry details using 1950s technology. Apollo 13 was saved by slide rules. And cigarettes. Thousands of cigarettes.

IT was useful, too, to be reminded that less than a year after the July 1969 moon landing, the public had already lost interest in lunar missions. The Apollo 13 crew's broadcast from outer space was not even screened live by the TV channels. It was only when disaster struck and death seemed imminent that the media woke up. Oh, we do love a good crisis.

THERE is a moral here. Within the next 10 years we may see another series of lunar missions. But don't be surprised if that series, like the Apollo missions, gets cut short because a) the US taxpayers won't stand the cost and b) the global TV audience would rather be watching repeats of Friends.

I HAVE been inside Mission Control, Houston. Like so many iconic places, from the House of Commons to Moscow's Red Square and your old school assembly hall, it's much smaller than you expect.

HOUSTON'S preserved Saturn V rocket, on the other hand, is enormous. I was reminded of interviewing a fiery feminist back in the 1970s who denounced the Apollo missions for their alleged male imagery of thrusting rockets: "It's all so bloody phallic," she complained. "Where are all the small, round, warm, nurturing things?" I never did find out. 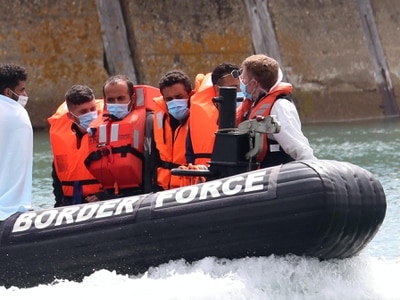