Pubs have finally reopened their doors after a lengthy lockdown, and parched patrons enjoyed a happy hour like no other as they supped on their sacred first pints.

The easing of government restrictions meant licensees could welcome back drinkers to Shropshire’s exceptional array of hostelries but, as with many things these days, there are changes to get used to.

The experience of buying a pint on a Saturday afternoon at The Wild Pig in Meole Brace, Shrewsbury, took on a somewhat more formal procedure than the usual routine of piling in among hordes of Salopians and jostling one’s way to the bar for a pre-match pint before a Shrewsbury Town game. 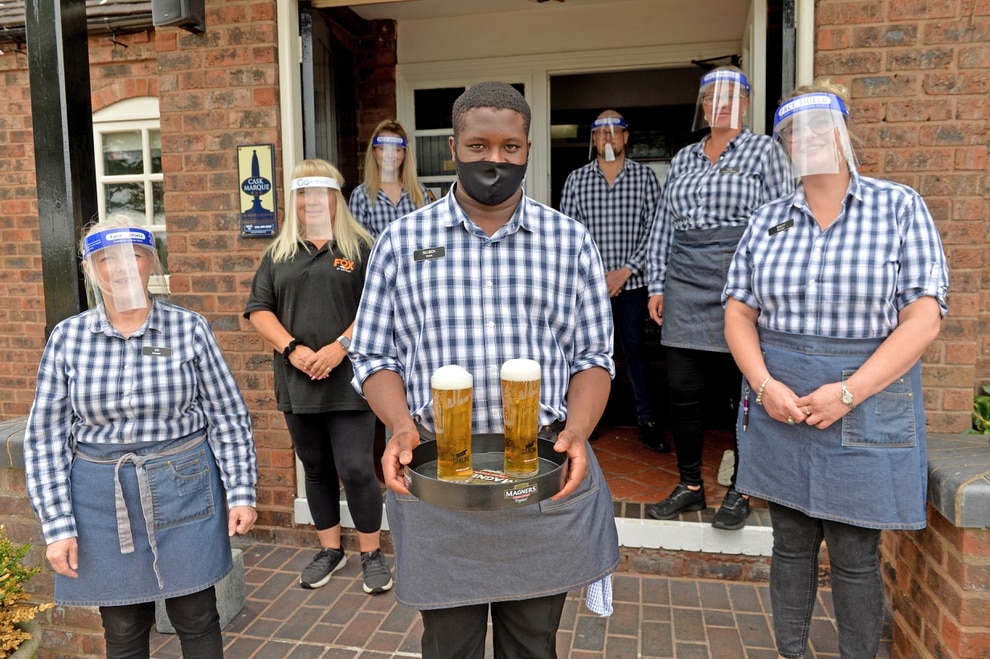 Staff at The Fox at Shipley 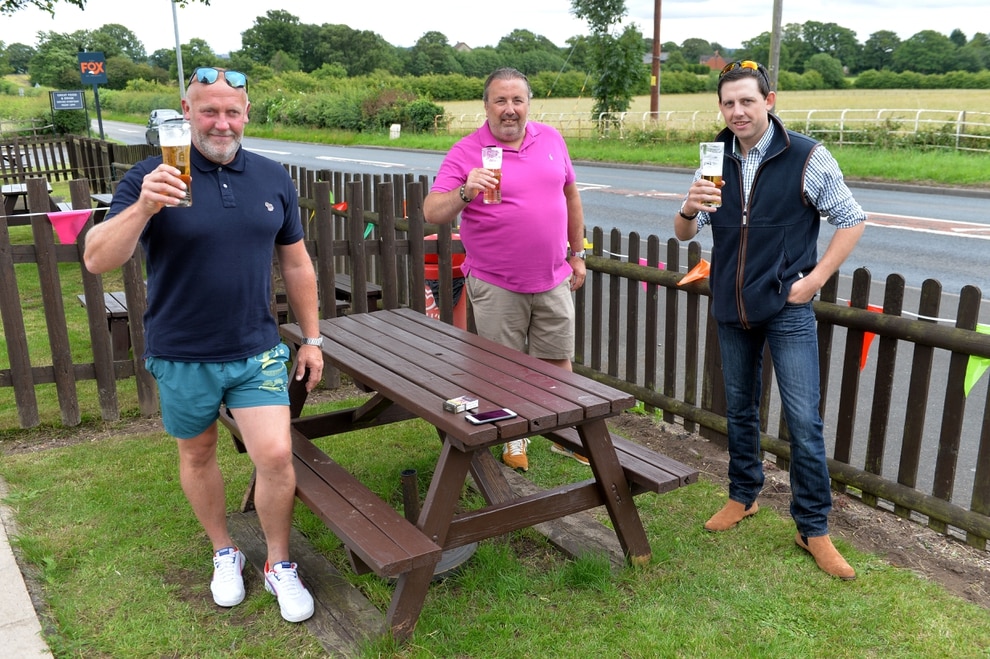 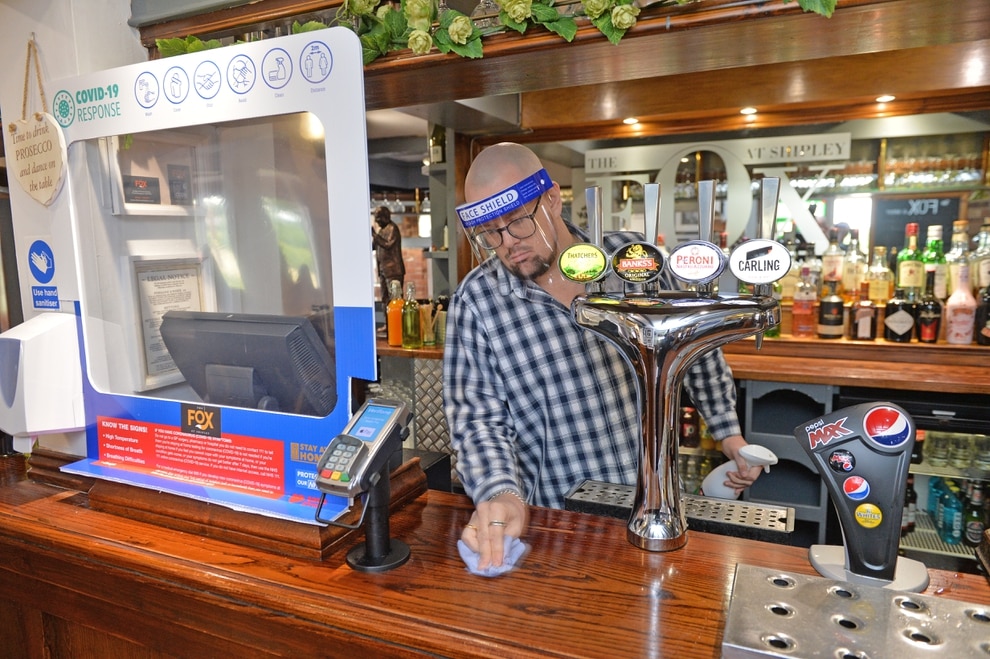 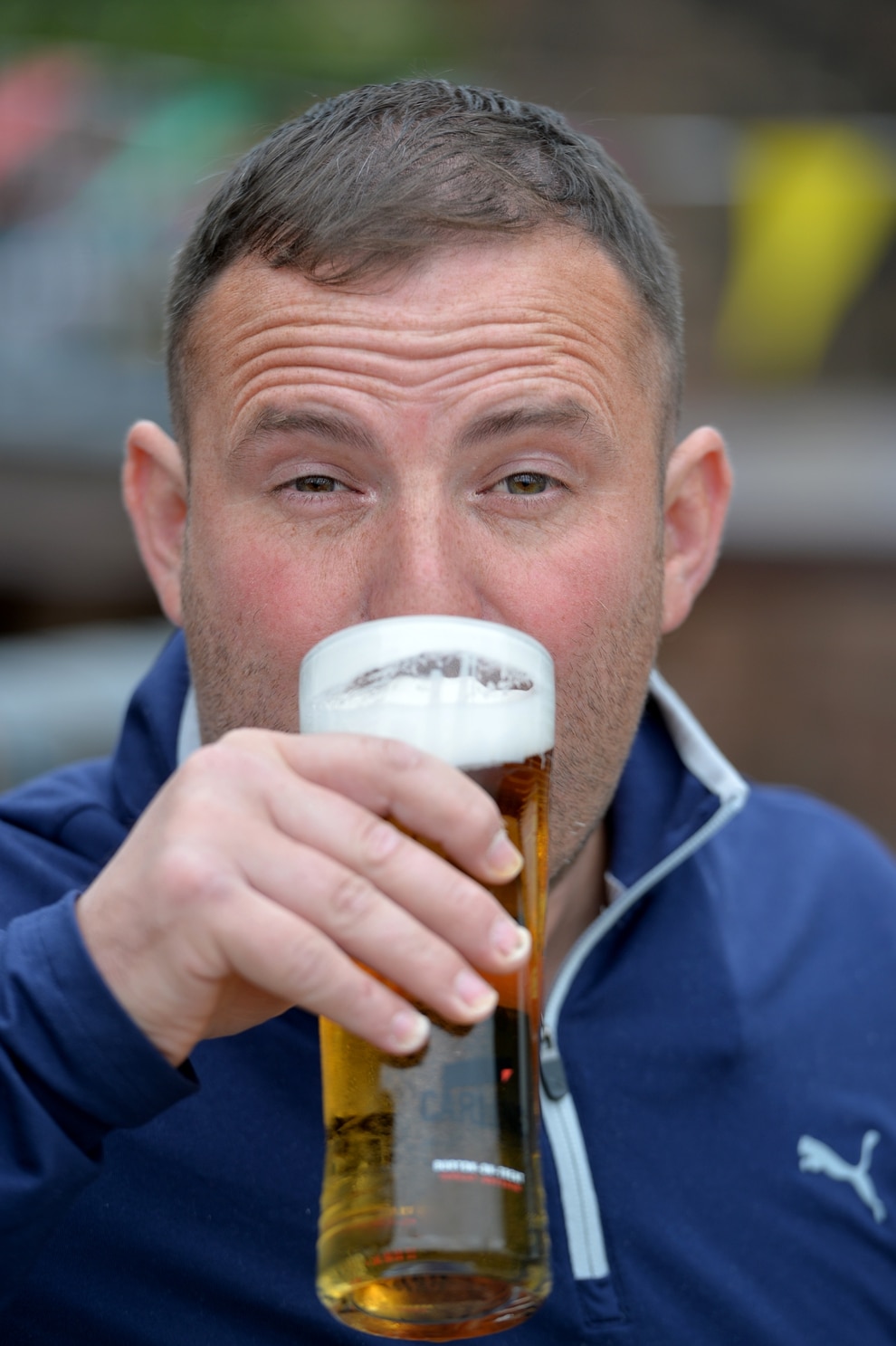 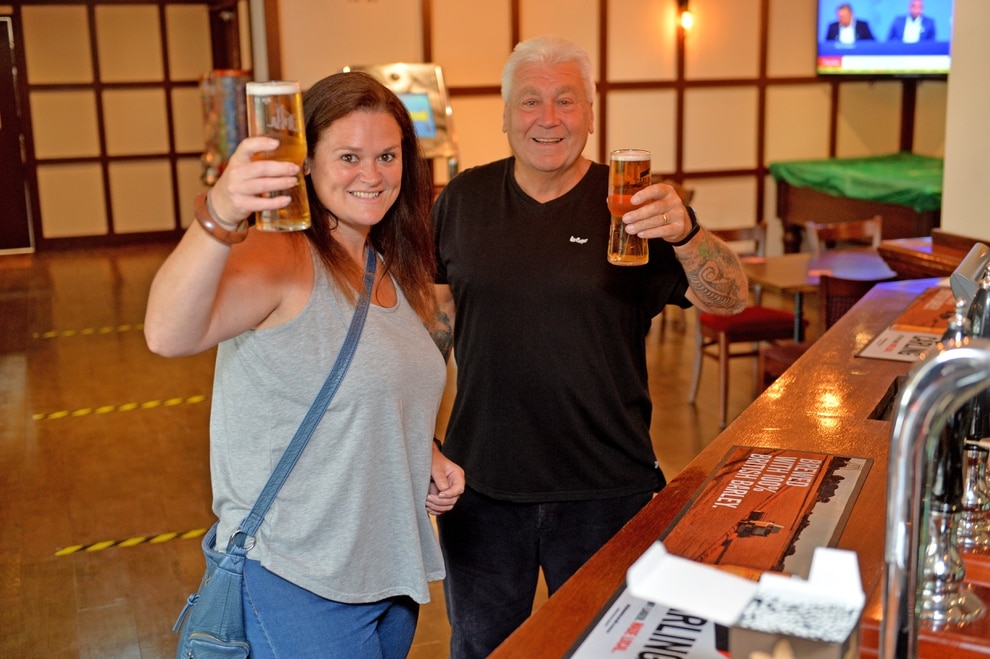 David and Louella Hartshorn at the reopening of The Wild Pig 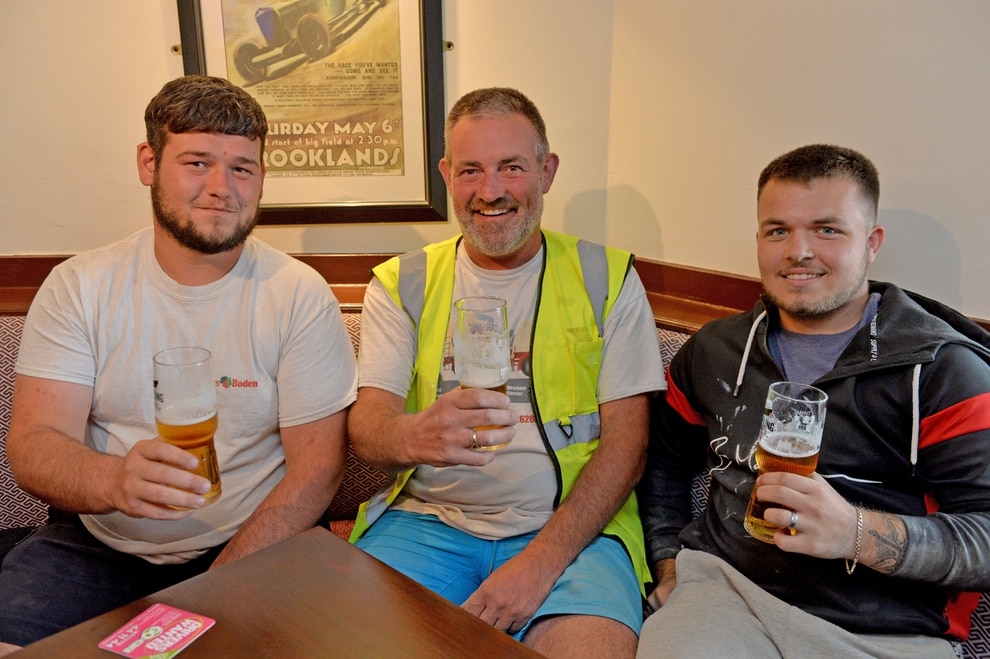 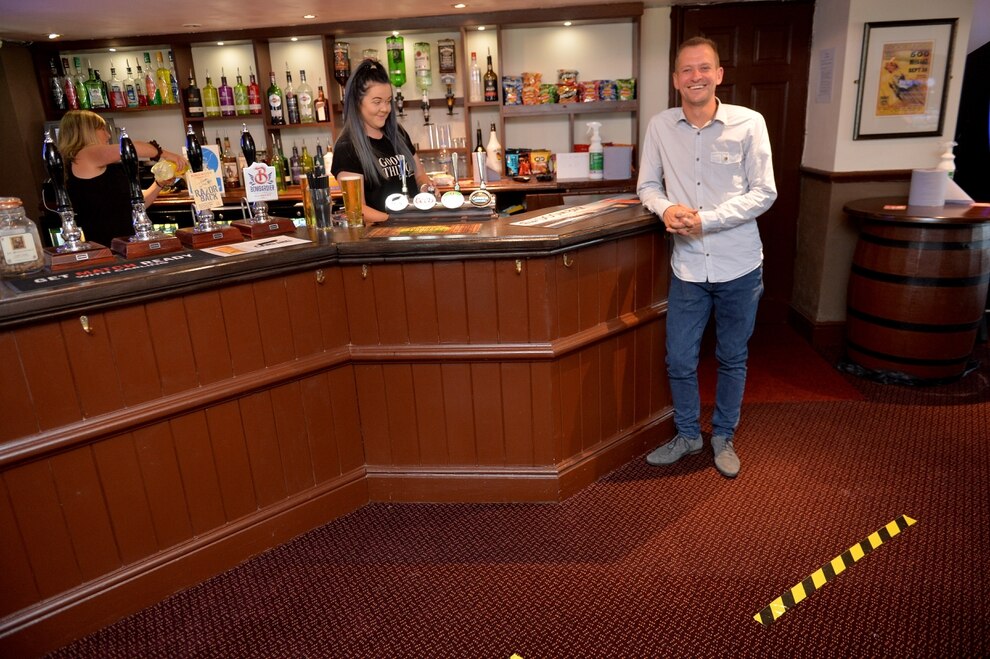 Kaz O'Callaghan back behind the bar at The Wild Pig 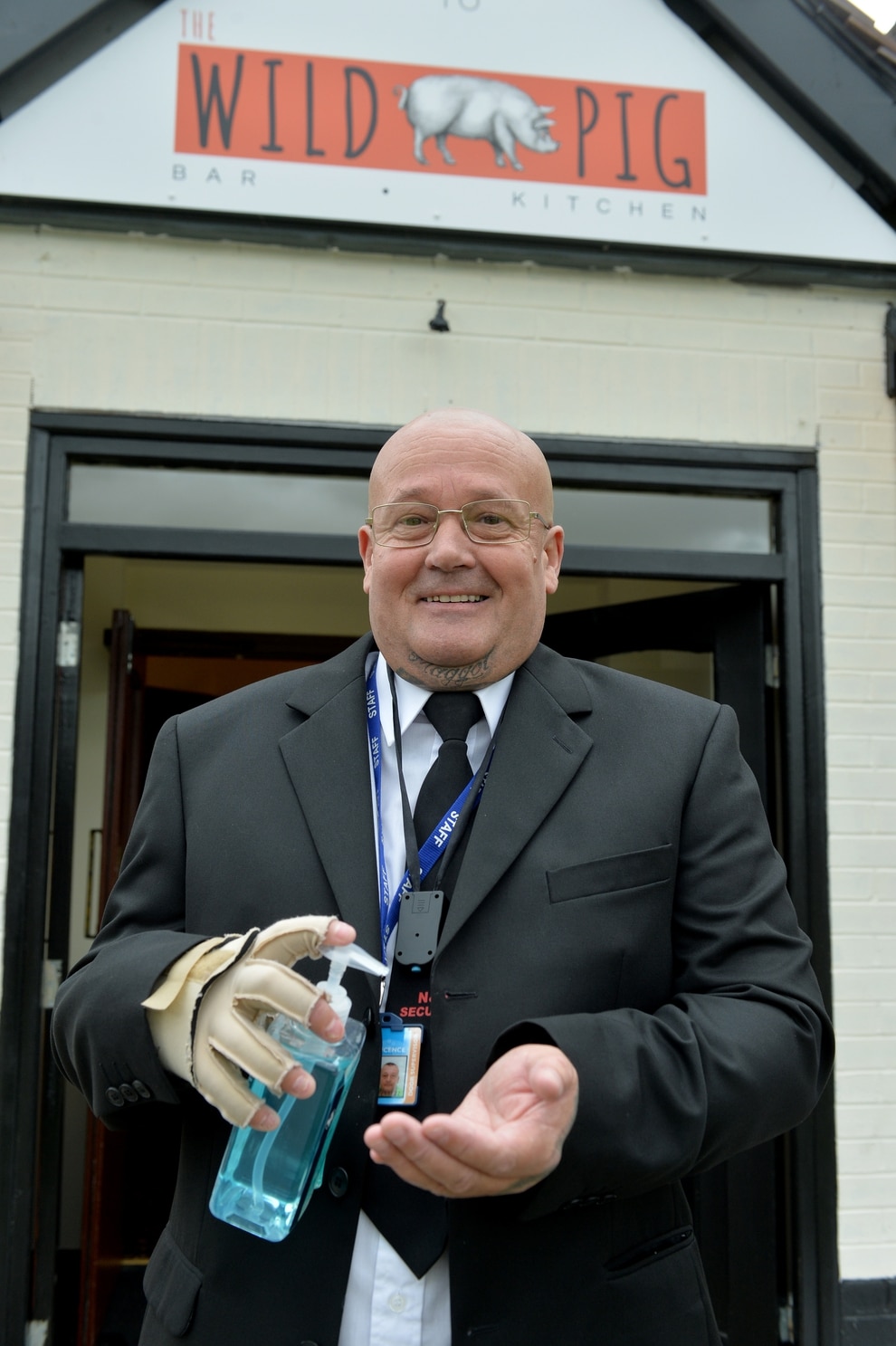 Neil Matthews from N&S Security gets ready to welcome drinkers

Now drinkers queue up before doorman Neil Matthews, who directs them first to a table with hand sanitiser and a sign-in sheet, on which customers must write their details for Covid-19 track and trace purposes.

Every step of the way to the bar is marked out by tape spaced by 2m and, much like in supermarkets and banks, people must wait before stepping forward. Bar staff then take your order before bringing it to your table. There is a complete one-way system to lead you to either an inside seat or outside into the large beer garden area.

For your first pint in three months it’s quite the novelty, and having drinks brought to your table adds a continental touch that many may not get to enjoy for a while, given rules surrounding holidays. The buzz of cheerful energy among drinkers was as palpable as the pints being sunk.

Rob Baker was one of the first through the doors. The bricklayer felt that the system in place at The Wild Pig is pretty straightforward to follow and people should be comfortable with it, given similar measures have been in place in supermarkets and other shops.

“I think we’re more or less used to it now,” he added. “They’ve had it in the shops. Whether people stick to it after three or four pints is another question. I’ve got to be on my best behaviour today because I’ve got to go to a barbecue in a bit.”

Louella Hartshorn popped in for a pint with her dad David. She said: “It’s nice to be back and to have a bit more normality. We’re local to Meole so it’s nice to be able to come and see people again.

“It seems like it’s been set up well and they show you the way to go round. We thought we’d just come and test the waters.”

James Hopkins, manager at The Wild Pig, admitted he was a bit apprehensive at reopening on a Saturday, but was pleased with how well it went. I’m chuffed to be back and everyone’s been having a great time,” he said.

“A lot of the people we’ve had in have been the regulars so they’ve been abiding by the rules and socially distancing. It appears everyone is following the guidelines. I think a lot of people have missed the pub.

“The regulars are really chuffed to be back. Because of social media, we’ve been able to stay in touch. We’ve not been putting as much on there as usual, but people couldn’t wait to see us back and have been desperate for it to open, which is nice.”

To best cater for regulars, The Wild Pig adopted a first come, first served system, rather than doing ticketing like a lot of town centre venues. There have been lots of things for James and his team to consider ahead of the grand reopening.

“We’ve only got capacity for 80 people now with social distancing, compared with 300 we’d normally have on a weekend. It’s difficult because our bills will be the same.

“Losing the football as well is a massive blow to us. We have to be careful because you can’t have big groups of lads all congregating around a TV screen. We’ll lose a lot from Shrewsbury Town games as well. We’re the pub that most people go to before the game, and the club advertises us as the pub for away fans as well. The away fans use the function room and the Shrewsbury fans use the main pub so it splits in two. But you’ve got to be positive about it and I’m really glad to be open again.”

Meanwhile customers at The Fox at Shipley pub, on Bridgnorth Road, were pleased to be back out and about and talking to other people – all with a pint.

Pete Taylor, general manager of the pub, said: “It’s nice to see people back out and about and coming into the pub.

“It’s been a difficult few months, but even in lockdown work was continuing to take place – it needed to be all clean and tidy.

“And now we’re back and we’re overjoyed.”

Kultar Deol, who lives near to the pub, said it was nice to return to the pub and be in the environment.

He said: “It’s nice to be here – I think we needed some sort of business opening back up during all of this and this has been really good.” Richard Lane, who was out drinking with his friend Stephen Holmes at the pub, said it was fantastic to be able to able to visit.

But they said it was unusual to not be there with 73-year-old Bev Pagett who passed away few weeks ago due to cancer – with the pair unable to catch up with him.

They were meant to catch up with the 73-year-old at the pub but were unable to due to the subsequent restrictions put in place.

Mr Holmes, from Brocton, said: “It’s been fantastic really to get back. We used to do a pub crawl and we used to end up here.

“We all moved into the area at roughly the same time and there was a man, Bev Pagett, who lived round this area.

“He was a really amazing man but unfortunately he passed away a few weeks ago – and with the pubs closing down it stopped us meeting up with him really. Bev was really an amazing man – it’s been the hardest part of this.

“We’ve not been able to keep in touch with him and he was like our right arm.”

West Midlands Mayor Andy Street welcomed the mass easing of restrictions across the region – and said he would be getting a haircut.

Mr Street said: “We should say an enormous ‘thank you’ to those people who have been working hard to make sure their businesses are ready for us and are safe.

“Lots of different arrangements have been put in place, so thank you to all the proprietors that have done exactly that.

“But please continue to follow social-distancing guidelines – particularly in a shared place – because that way we can all continue of look forward to progressive liftings of the lockdown.”

Cities and towns across England recorded a surge in evening visitors on the first day of pubs and bars opening after more than three months of lockdown.

According to Springboard, a company that measures the number of potential customers at retail and hospitality outlets, footfall on England’s high streets after 5pm surged by more than a third on Saturday compared with a week ago.

And the chairman of the Police Federation, John Apter, said it was “crystal clear” drunk people could not socially distance as pictures emerged of streets in London packed with revellers.

However, figures comparing the overall footfall with the same Saturday last year showed the number of people out and about was dramatically lower. Across England, the number of people visiting shopping and leisure destinations was about half the level of last year, and in central London, footfall was 75 per cent lower than in 2019.

Meanwhile in Wales, the hospitality sector will begin to reopen outdoors from July 13, if cases of coronavirus continue to fall, as part of a phased easing of lockdown. According to the Welsh Government, it follows a rapid review of the hospitality sector in Wales to look at how the industry can safely begin operating once more.

The first phase will see the re-opening of outdoor spaces owned by businesses and subject to existing licences. This Welsh Government has said this is only if the virus remains under control and is subject to the outcome of a review of the regulations.

The reopening of indoor services will be considered later, depending on the success of outdoor opening, the ongoing coronavirus situation in Wales and other measures businesses put in place to reduce the risk of transmission.

Shropshire restaurants glad to join Eat Out to Help Out scheme 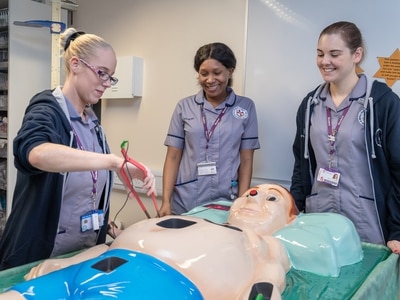