Blame the Romans. They’re the ones responsible for agony and ecstasy on February 14. St. Valentine’s Day has origins in the Roman festival of Lupercalia, held in mid-February.

The men sacrificed a goat and a dog, then whipped women with the hides of the animals they had just slain. The festival, which celebrated the coming of spring, included fertility rites and the pairing off of women with men by lottery.

At the end of the 5th century, Pope Gelasius I replaced Lupercalia with St. Valentine’s Day. It came to be celebrated as a day of romance from about the 14th century.

The day is thought to have taken its name from a priest who was martyred about 270 CE by the emperor Claudius II Gothicus.

The priest signed a letter “from your Valentine” to his jailer’s daughter, whom he had befriended. Others believe the day was named after St. Valentine of Terni, a bishop, though it is possible the two saints were actually one person.

Another common legend states that St. Valentine defied the emperor’s orders and secretly married couples to spare the husbands from war.

As the years went on, the holiday grew sweeter. Chaucer and Shakespeare romanticised it in their work, and it gained popularity throughout Britain and the rest of Europe.

Indeed, while the Saint Valentine story set the groundwork for establishing the day as a holiday for romantic love, what truly solidified the connection between Saint Valentine and love was a poem by medieval author Geoffrey Chaucer in 1381, which historians consider the origin of the “modern” celebration of Valentine’s Day, where we celebrate our romantic partnership with one other person.

Handmade paper cards became the tokens-du-jour in the Middle Ages.

Eventually, the tradition made its way to the New World. The industrial revolution ushered in factory-made cards in the 19th century.

And in 1913, Hallmark Cards of Kansas City, Mo., began mass producing valentines. February has not been the same since. The feast day was removed from the Christian liturgical calendar in 1969.

In the 21st century, we can find out exactly what others are doing for Valentine’s Day by observing their internet browsing habits. So, for instance, popular search terms are sweet and include things like edible arrangements, Valentine’s Day deals and heart-shaped pizza. Other popular searches are eHarmony and, erm, Tinder.

Valentine’s Day is, of course, remarkably commercialised and the price of flowers goes through the roof come February 14. This isn’t simply because local florist’s are cashing in, however.

Winter’s shorter daylight hours and higher energy costs hamper efforts to grow large rose crops. To get ready for the huge volume of roses need by February 14th, the farmers have to time the growth of the plants.

Essentially they halt production of roses by cutting the stems back so that they produce a bumper harvest by February 14.

The cost of stopping everyday production while the Valentines roses are produced is passed on to the consumer and the bumper harvest will produce up to three times the normal volume of roses typically harvested by the farmer – which also means extra labour costs for the harvest.

Here, Team Weekend takes a look at modern Valentine's Day celebrations consist of, and what men and women really want out of the special day...

It’s been just over a month since Christmas and alas, the next gift-giving celebration is upon us – Valentine’s Day.

I must admit that before I met my husband, I was never really that bothered about Valentine’s Day.

I didn’t begrudge loved up couples and their romantic displays, but I had always worked in service jobs pulling pints or waiting tables, so I had worked every Valentine’s Day since the dawn of time – or so it seemed.

Instead of being showered with roses, stuffed animals carrying hearts and twinkling jewellery, I was mostly covered in beer foam, reams of meal tickets and shards of smashed plates.

But now I work a highly-coveted office job, leaving my weekends and evenings free to be wined and dined. I can finally celebrate the most romantic holiday of them all.

When asked to write this column giving our keen readers an insight into what women REALLY want for Valentine’s day, my mind drew a blank.

What do we really want?

Because I’d previously never really celebrated the big day, I never really had any expectations for it. Just getting to spend some time with my husband and maybe take a day trip makes for a successful Valentine’s Day to me.

But when I asked my friends, many of them had visions of surprise flower arrangements, candlelit meals and extravagant gestures that would make them feel starry eyed.

When it comes to women on Valentine’s Day, we can be a complex bunch. Some of us hate it, some of us love it, and some of us, strangely, claim we couldn’t care less but then get disappointed when we get left out, making it very difficult for our loving partners to get it right.

I read many lists online and in magazines to gain some insight into the average female psyche when it comes to Valentine’s Day, and was bombarded with pictures of lingerie, pink fizzy wine, reams of diamonds and various films featuring Leonardo DiCaprio and Brad Pitt.

Not all of us buy into the bouquets of flowers and boxes of milk chocolate, but that doesn’t necessarily mean we want our partners to let Valentine’s Day just drift by under the radar.

No matter what your loved one thinks of Valentine’s Day, what I’m sure all women can agree on is it’s not the price-tag that really impresses us, it’s the thought that goes into it.

It’s cliche, I know, but there is something way more sentimental about a really well thought out gift than grabbing the first card and heart-emblazoned cash-grabbing trope you see on a shop shelf.

Why? Because it’s always nice to feel special.

It doesn’t matter your gender, sexuality, race, age or background, we all like the feeling of someone saying ‘this made me think of you’.

Plus, it’ll save you heaps of money, and who doesn’t love a partner who knows when to be frugal? A handmade card can cost you pennies, and shows your partner you really care. You can pour love into a home cooked meal, rather than shelling out big bucks for a set menu in a packed restaurant.

And in my finest Julie Andrews... ‘Buckets of chicken and chips by the mountain; barrels of Scotch and a cask ale fountain; putting my feet up while Axl Rose sings; these are a few of my favourite things.’

Thinking about what a man wants on Valentine’s Day is tricky. Most of us do one of two things – either worry about what our partner might like, or forget about the whole thing entirely.

We don’t really tend to give a second thought to what we’d like, because traditionally, Valentine’s is about the ladies. As men, we’re just happy if we make it through it having gotten a thumbs-up and passing the test for another year.

But, why not? Let’s have a think... Aside from the wonderful pleasures I listed earlier, what might blokes want on Valentine’s Day?

Men are relatively simple creatures when it comes to presents and surprises, so a variation on the classics of booze, food and entertainment should have you pretty well set.

But if you’re looking to bring a particular grin to his face this year, of all the ideas I’ve seen floating around, this one seems like a winner...

Any British bloke who says he hasn’t dreamt of life as James Bond at some point is lying – plain and simple. And with the anticipation of the new film running high, this Valentine’s Day could be the perfect time to treat your chap to his own slice of ‘double-O heaven’.

If this sounds like your bloke’s tipple, plan a night with a twist where both of you get your glad rags on – tux for him being essential – and head out for dinner, Martinis, and in true Bond-style, a trip to the casino.

For those of you who really want to splash the cash, a driving experience day featuring some species of Aston Martin could seal the deal perfectly. And if money really is no object, you could even go one further and have a hollowed-out volcano lair built for him in the garden. I’m joking of course... ish.

If it’s a particularly special year, a stylish timepiece à la Bond’s magnificent watch collection will undoubtedly be a hit. He might even be prepared to don the Daniel Craig trunks for you then... just proceed with caution – this look can be something of a gamble.

Bond may not be your bloke’s thing (strange, but possible). If this is the case, just think of something he loves and tie it together with his stomach – you won’t go far wrong.

I maintain, we’re simple creatures, and all men really want for Valentine’s is a stress-free experience... And maybe some monster trucks.

When it all comes down to it, the main thing is not to let the pressure of the day get in the way of a great excuse for some quality time together.

For me, a night in with the Queen of Hearts and the chicken from the above list will be perfect.

And seeing as I’ve been humming along to one of its stand-out numbers now for 500 words, a cheeky bit of The Sound of Music might not go amiss either. The hills are alive... 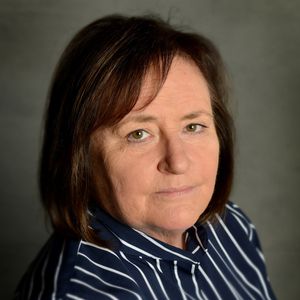 'We can't carry on like this': Nurses picket outside Shropshire's orthopaedic hospital

M&Co to close all stores despite buyout

Dances With Wolves actor charged with sex abuse and trafficking