When a butcher becomes a pub landord you can expect great meat on the menu. Sharon Walters enjoys carnivore’s paradise at The Station. . . 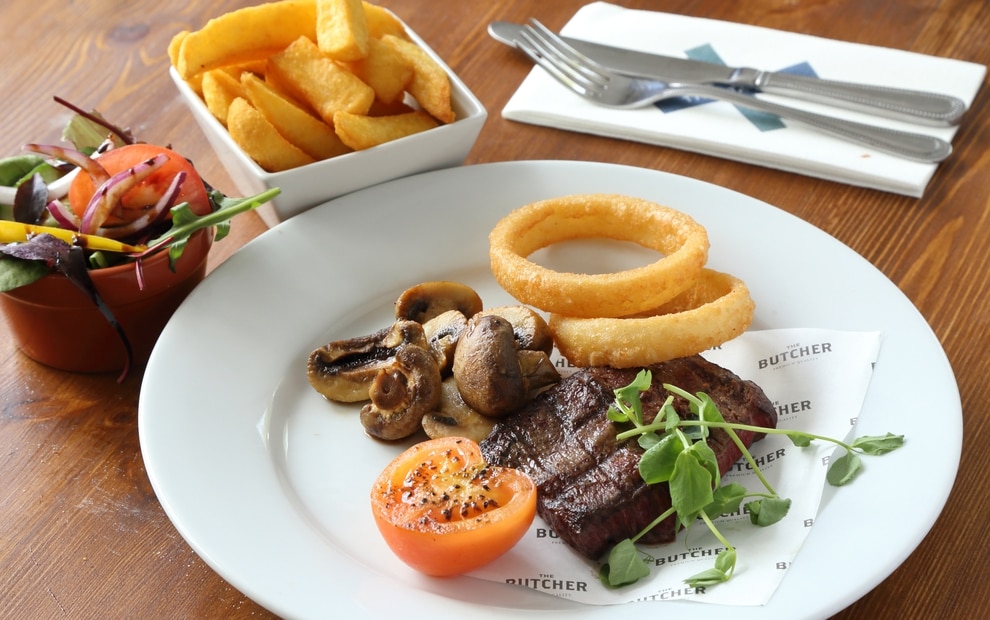 Pleased to meat you – steak was served with onion rings, chips and mushrooms Pictures by Russell Davies 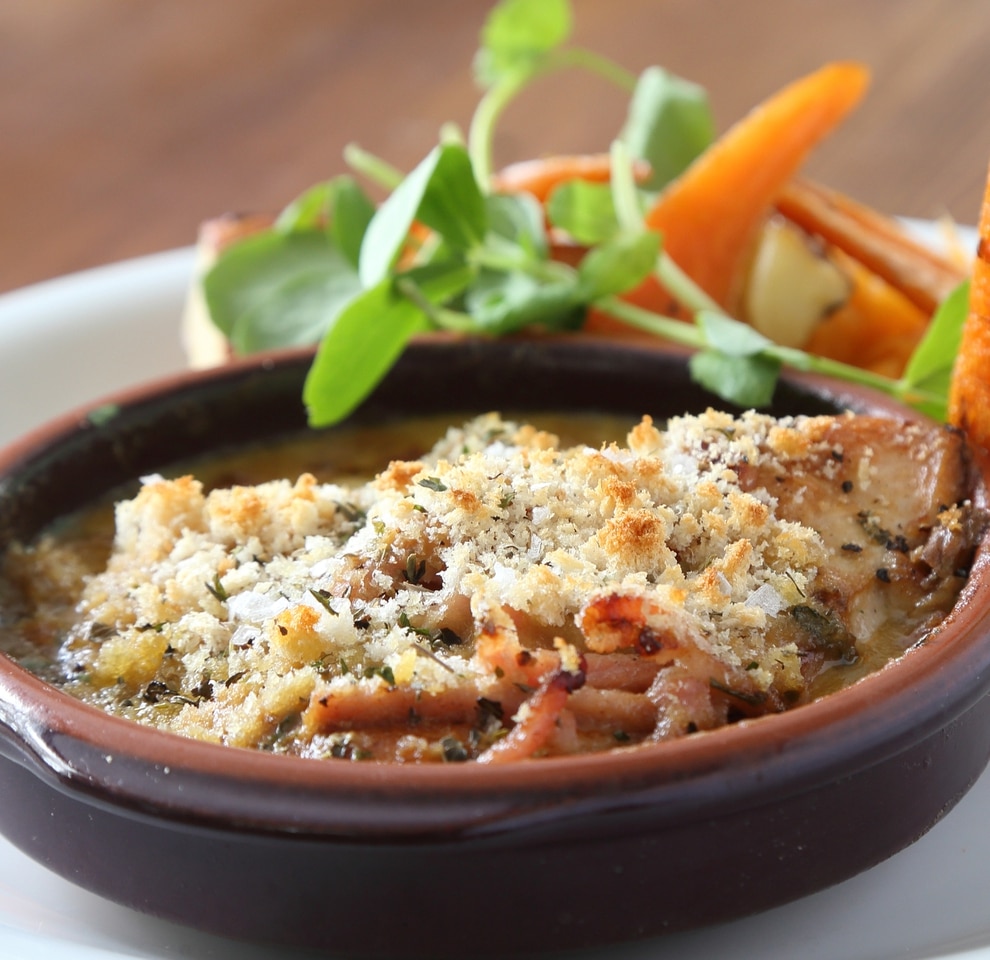 Delicious – the food did not disappoint 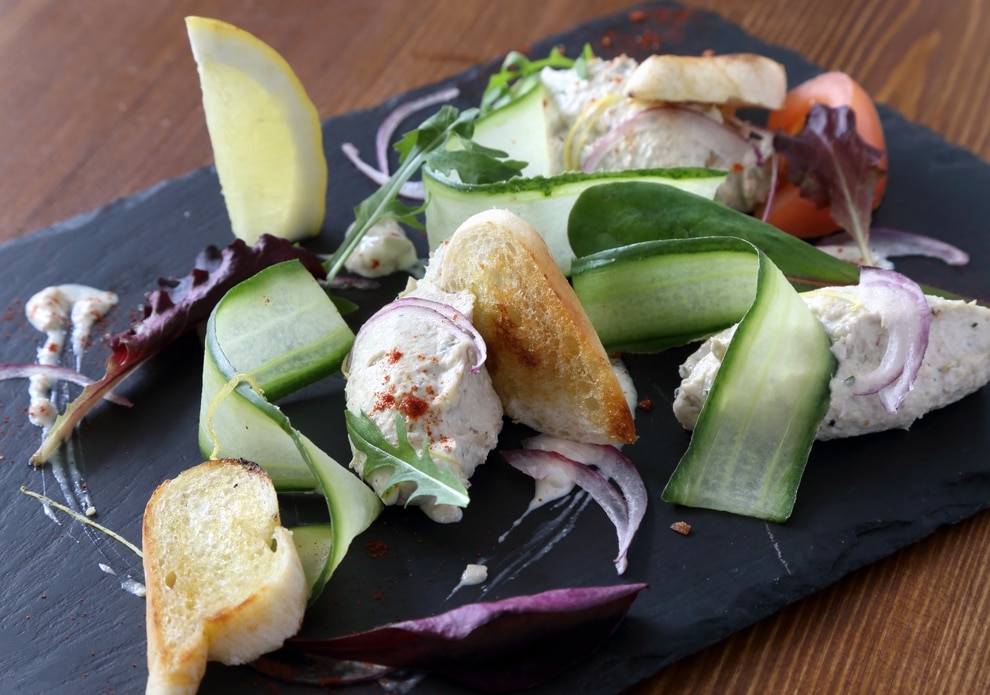 It’s been 20 years since butcher Richard Davies took over the reins of The Station Inn in south Shropshire.

With wife Lesley, he’s transformed it from a typical but fairly quiet country pub into a thriving hub for those who want good food and especially excellent meat – as you would expect from a butcher – in a warm and welcoming environment.

And now it has had a major upgrade, transforming the interior into a stylish eatery while at the same time retaining some original features with a pleasant bar where you can enjoy a decent snack and a pint, along with that warm and welcoming atmosphere. Walk through the door and you’re immediately made welcome.

The pub, at Marshbrook just yards from the A49 on the B4370 three miles south of Church Stretton, started life in the present building as The Station in the early 19th century next to where the tiny Marshbrook Railway Station once stood at a level crossing. It was renamed The Wayside in around 1972 but in the early 1990s went back to being called The Station. However, the original pub was called the New Inn when it was located on the other side of the road but once the railway arrived in 1853 it was rebuilt in its current spot and renamed The Station. I find all these historical facts fascinating as it paints a picture of the area and how things come to be as they are today.

And these days The Station is well worth a visit on any day of the week but especially on Friday’s for Butcher Night when there’s a fantastic array of meats where you can choose the size of the portion you want and pay by the 100g. Perfect for me who loves quality beef but really only wants six ounces – or just under 200g. And also perfect for those who want to go large.

The usual menu includes a variety of light bites including sausages produced locally at Strefford Farm and cooked in honey and wholegrain mustard, handmade spicy meatballs with a rich spicy tomato sauce, a range of baguettes along with homemade burgers and fish and chips. The main menu has a good selection of salads, pasta and vegetarian dishes and meat dishes including standard steaks, pork and chicken.

But back to Butcher Night which I went along for, although you can also eat off the main menu as well.

The Davies family’s butcher’s dynasty was started by Leonard William in the early part of the 20th century over in the Black Country. Four generations on and the tradition continues with his grandson Richard who came to The Station in 1997. He quickly developed a great reputation for quality steak. “Sourcing our meat couldn’t be more steeped in techniques of old, with a focus on top-quality produce from incredible local farmers,” says Richard.

“Only grain-fed beef can guarantee the very best quality Flat Iron steak, which we have become renowned for.”

Richard and Leslie, along with family members who help run the business, also offer premium dry-aged beef, which is matured in a dry-ageing cabinet for 28 days. Dry-aged beef is particularly renowned for its distinct flavour and is best enjoyed when no cooked no more than medium-rare.

So it was obvious that one of us had to have a dry-aged steak and the other Flat Iron. Specialities, after all.

But to start I nibbled on pork belly bites which had been slow roasted in home-made stock and served with a sweet chilli dipping sauce. For £5.50 a great deal and which my partner simply had to experience himself by sneaking off my plate . . . He went for smoked mackerel paté that had a hint of horseradish and came with toast. Suffice to say both plates were cleared.

To choose your meat on Butcher Night you go up to the counter, pick the piece and weight of meat you want and decide how you want it cooked. So I had a piece of the recommended flat iron steak, not seen in many eateries, cooked medium with a Dijon mustard sauce. The man decided on a dry-aged ribeye steak with a pepper sauce.

You have a choice of chips or new potatoes along with a dressed salad. We had to have the chips with steak. They were golden and crisp on the outside and fluffy on the inside. Delicious. The man said the best he’d had in a long time. And he is a bit of a chip connoisseur, no fries for him.

The salad was well presented with a refreshing dressing. There’s also a range of other side dishes as extras including onion rings, vegetables and sweet potato chips. We were tempted by a couple but so glad we decided not to as the chips and salad were more than enough for us.

It’s a shame that you don’t see more Flat Iron steak on menus, I suspect it’s because the name might put diners off, because it is flavoursome when cooked medium at most. Any more and it can go a little tough. But mine was perfect medium with just the right amount of pink in the middle and a great change from ribeye which I usually go for. The Dijon mustard sauce was smooth and again a change from my usual selection of English mustard – from hit-you-in-the-mouth strong to more delicate was again a pleasant change.

After reading all about the 28-day premium dry-aged beef which is available throughout the week (and seeing some of it hanging in its cabinet behind the meat counter) the man was hoping he wouldn’t be disappointed with his selection of medium rare ribeye – and he certainly wasn’t. As with my Flat Iron, the meat was so tender there was no need for a sharper steak knife. And, for his vampirish tendancies, there was the perfect amount of blood still left in the middle. Sorry about that but medium rare does have to have liquid still left in it.

Feeling fairly full we shared a pudding – fruit meringue roulade which we had with cream. A lovely fresh finish to what had been an excellent meal and all-round experience with friendly and efficient service and where we were not rushed to get through the meal and clear the table. The restaurant was almost full and a quick peak at other meals ( I tried not to stare too directly) revealed equally attractive looking plates of food, lots of smiles from the diners and a fantastic atmosphere. You couldn’t ask for more. And I will certainly be back at lunchtime to try one of their lighter meals or snacks. I’m often looking for somewhere for lunch when I have friends staying and The Station could be an excellent option after a walk in the surrounding hills.