The county's unsung heroes were given a Great Big Thank You on behalf of our readers at a prestigious awards ceremony organised by the Shropshire Star.

The winners of 11 different categories – voted for by you, our readers – were presented with their awards over afternoon tea at Hadley Park House Hotel on Thursday.

Guests sat in awe as they were told tales about the winners' courage, kindness and selfless devotion to the communities in which they lived. They ranged from a five-year-old boy to community stalwarts still working hard in their 80s.

Each winner was presented with a trophy hand made by the British Ironwork Centre at Oswestry, which had been donated free of charge.

Shropshire Star editor-in-chief Martin Wright said it had been a privilege to hold the event for second year running.

Pictures from the awards: 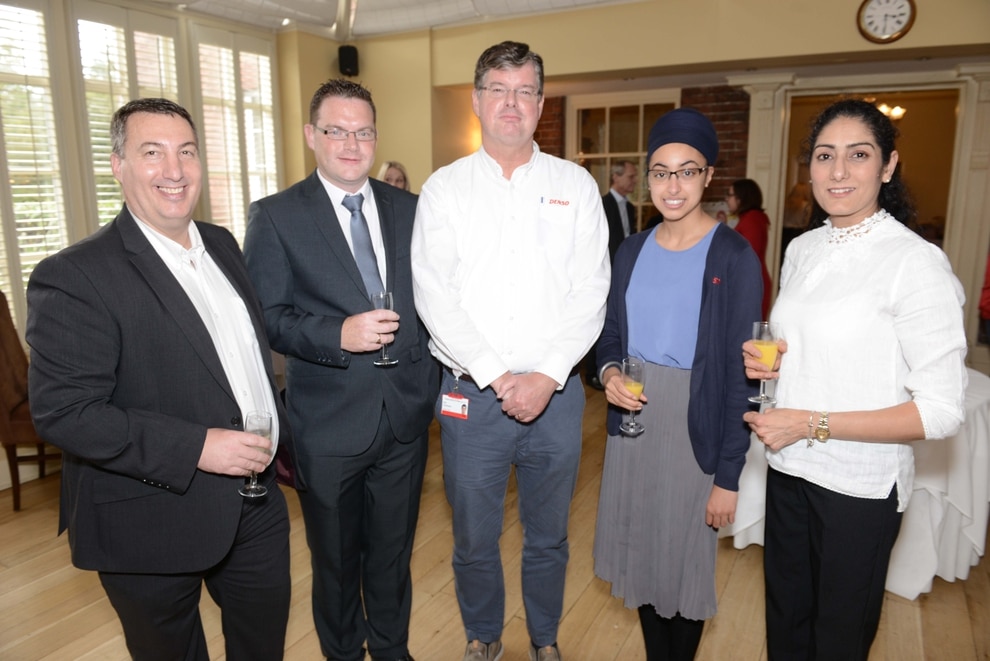 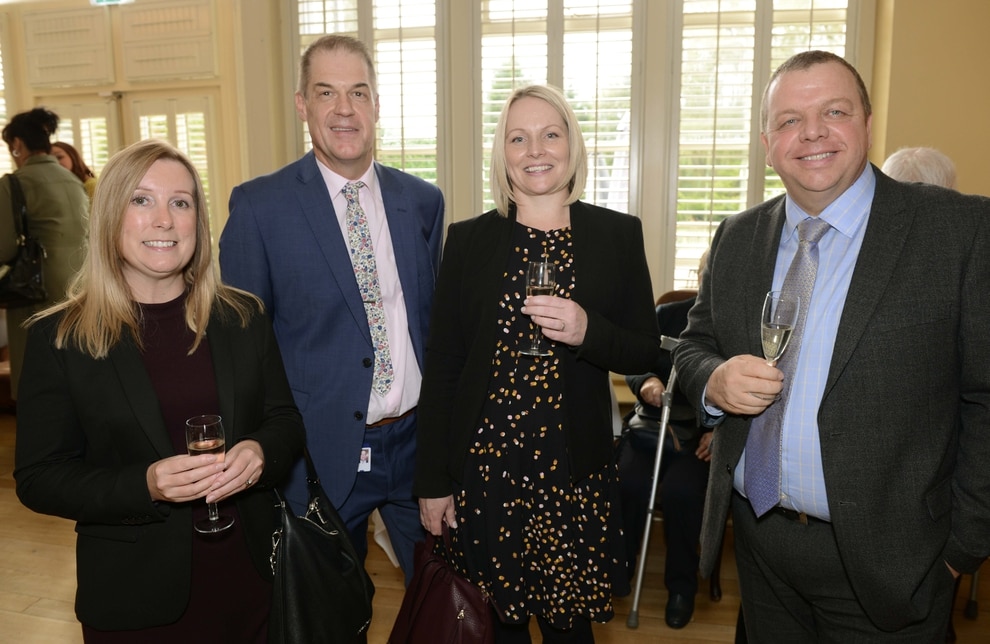 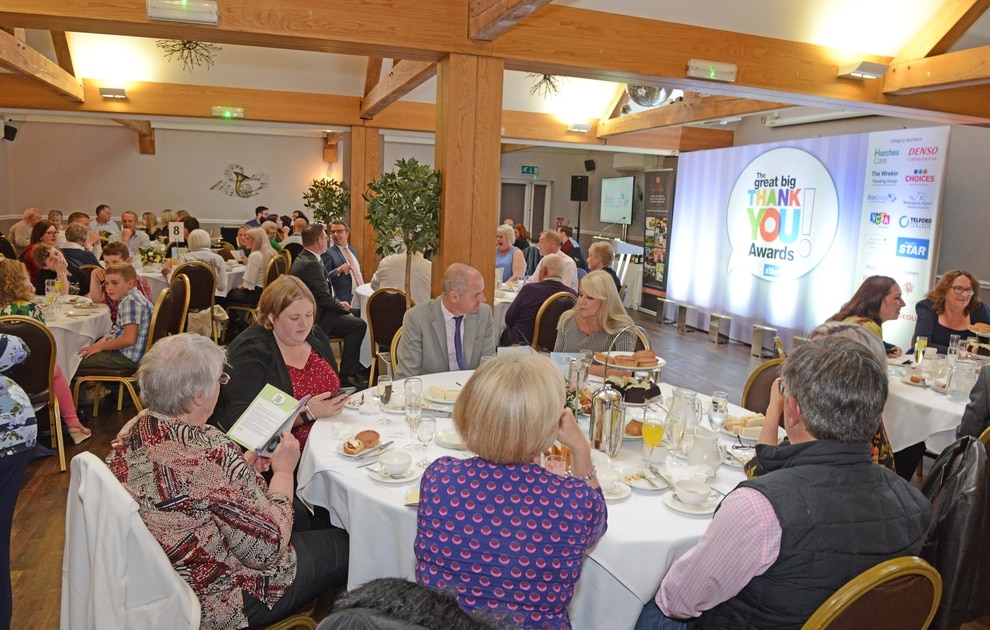 The Shropshire Star Great Big Thank You Awards get under way 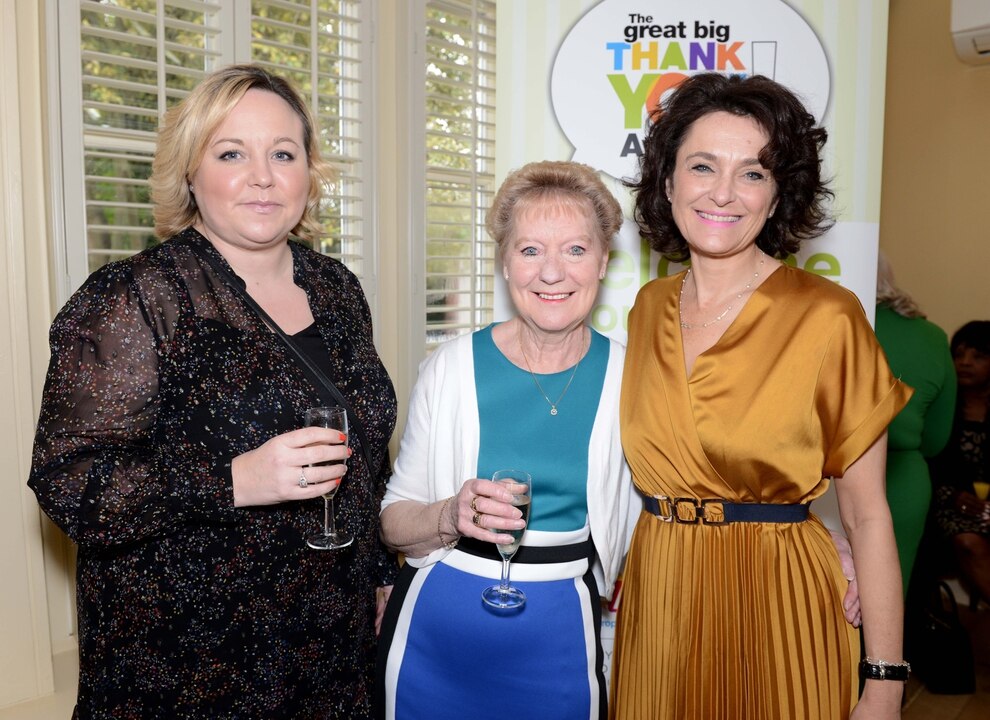 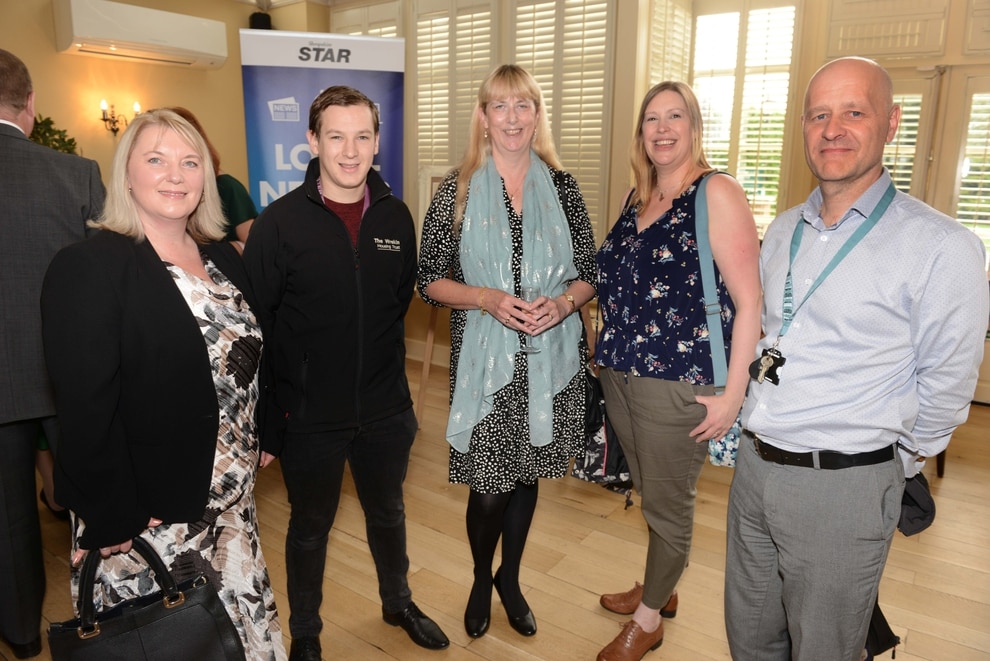 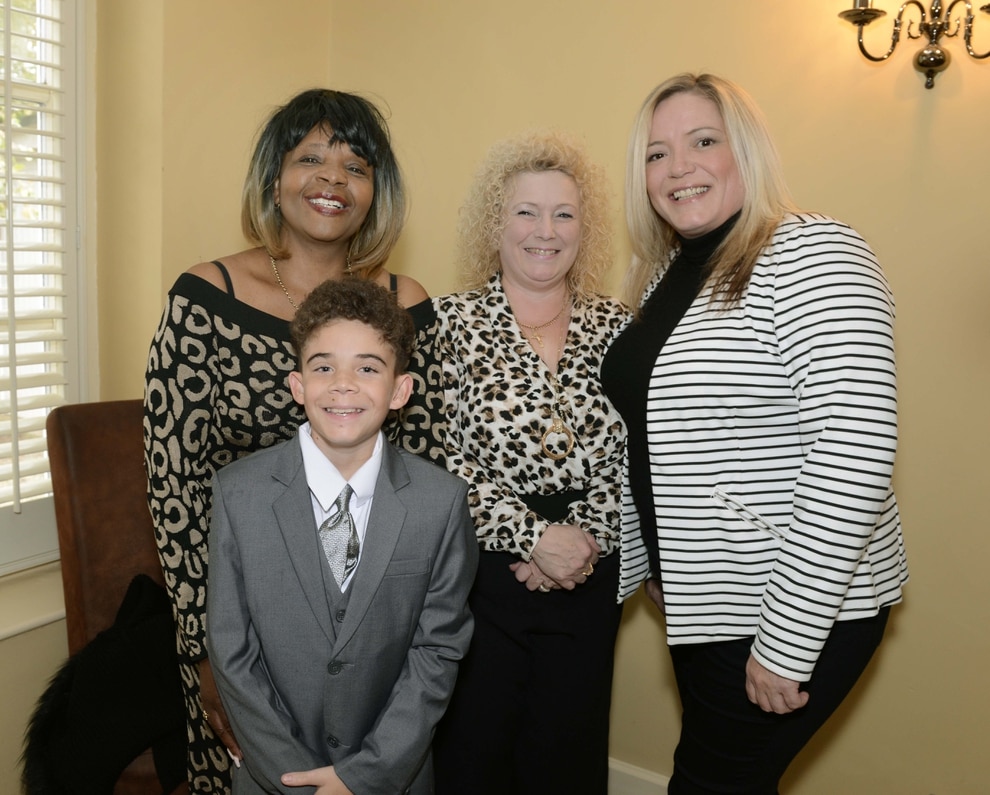 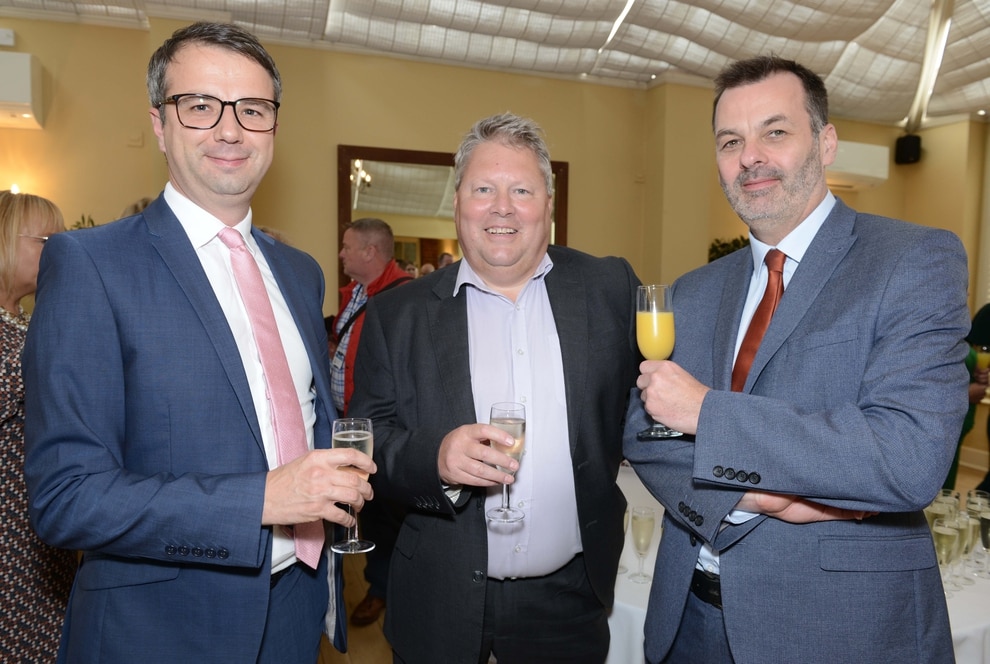 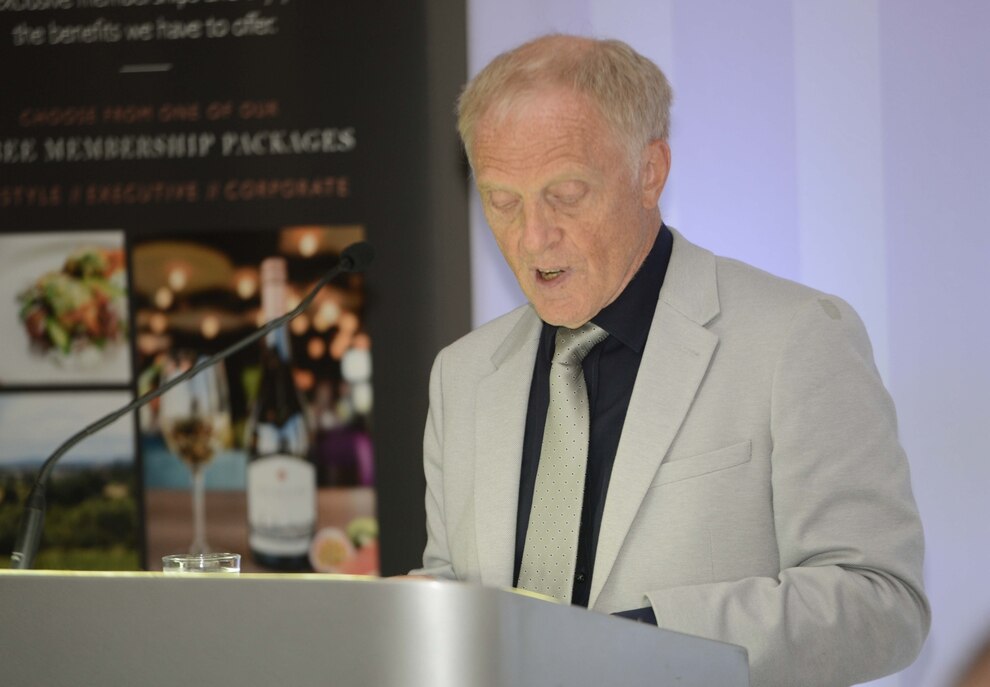 “When you hear what these people have achieved, many of them in the face of severe hardship and adversity, it makes you realise how privileged we are to live and work in such a wonderful place," he said.

"Some of the winners have shown amazing courage, others selfless devotion to helping others, but every one of them has done something truly remarkable.

"Every award has been hard earned and is richly deserved."

The winners for 10 of the categories were chosen by a public vote of readers, after a shortlist of 28 was printed in the paper in July.

The 11th winner, for Outstanding Bravery, was selected by Mr Wright as the editor's choice.

Mr Wright added that while there could only be one winner from each category, every one of the finalists should feel well and truly proud of what they had done.

First up was 80-year-old Doug Boulter from Shrewsbury, who took the Fundraiser of the Year title. Over the past 10 years Doug, helped by a loyal team of volunteers, has raised more than £100,000 for good causes, including the Lingen Davies Cancer Fund, the Midland Air Ambulance, the Robert Jones and Agnes Hunt Hospital in Gobowen, and Pontesbury Surgery.

He was presented with his accolade by Chris Lindsey of sponsor Denso.

Doug said he was amazed when he heard that he had won the award.

"I'm honoured that so many people voted for me," he said.

The Environmental Champion Award went to Penny and Dominic Jones-Parry and their friend Charlie Price, who spent their Easter holidays picking up litter for the entire length of the Great Glen Way. The three youngsters spent nine days walking 79 miles from one end to the other to clear it of all rubbish.

Paula Reynolds from Shire Living presented the Grandparent of the Year Award to Suman Bala who is described as ‘grandmother to Telford’.

The ceremony heard that even bus drivers and cabbies know her as 'Grandmother', and about her devotion to grandsons Rahul, 14, and Swastik, who is seven.

Volunteer of the Year title went to Paulette Bruce who, along with husband Bob, has been running Telford Gateway Club for 32 years. The club provides activities and social events for adults with learning disabilities, and guests heard how Paulette gave up her own time to organise events, buy gifts and take the members on holiday every year. This year she took them to Madame Tussauds in Blackpool, a ride on a steam train and a boat trip on Windermere.

After being presented with her trophy, she said: "It's a great honour, it's bee fantastic."

Reflecting the importance of farming to our county, this year's awards featured a category for Farming Community Champion for the first time. Mike Shepherd, of sponsor Whittingham Riddell, presented the inaugural award to Brenda Sturrock. The ceremony was told how, for the past 12 years, Brenda has been the voice at the end of the telephone for people in rural areas at the point of desperation.

As co-ordinator of Shropshire Rural Support Network, Brenda has encouraged and organised a team of volunteers to support those in need of help at times of crisis.

Nigel Downs of sponsor Choices presented the Carer of the Year Award to Teresa Ball who looked after her father for 26 years after a stroke left him paralysed from the neck down.

Teresa said she never expected to win the award, adding that her cousin Tracey Jones had also worked very hard to care for her father over the same time.

"I never thought I would have a chance because it's my dad," she said. "But I would do the same all over again."

There was rapturous applause for the Young Star Award, which went to 11-year-old Harlie McGowan. Harlie was just three years old when he lost his mother Sonia in 2011, and received support from a counsellor at Hope House Children's Hospice.

For the past three years he has worked to repay the charity for its help by raising money and helping other children also experiencing difficult times. Every Easter and Christmas he produces hampers for children who the hospice supports, and has collected 522 DVDs. He has also raised almost £2,000 for the charity, with his efforts continuing.

Carey Bloomer from Marches Care presented the Good Neighbour Award to Joyce Emmerton, who is is well known to people living at the Ridgway retirement complex in High Ercall near Telford.

The audience was told who Joyce helped her neighbours look after their pets by dog-sitting at her property, and taking them for walks when their owners were on holiday or unwell. Joyce also helps residents with mobility problems by walking them back from events at the complex.

Another new category for 2019 was the Teacher of the Year category, which went to Rob Davies, a PE teacher from Southall School in Dawley, Telford.

The school provides specialist support for children with disabilities and other special needs, and Rob was nominated for boosting a boy's confidence in playing football and learning how to be a team player.

He was presented with his award by Darren Wilson of Telford College, and afterwards Rob said he was humbled to have been chosen.

"I came into the profession to give children the opportunities and changes that we had in our lives," he said.

"It's an honour to have won, but it's also for the parents, the students and the other teachers, all the people who have shaped us and made us into the teachers we are."

The Community Champion Award, presented by Alison Fisher of Wrekin Housing Group, went to Mandie Mulloy for her work as chairman of the YMCA in Wellington. The ceremony heard how Mandie worked hard to develop links with the community and organised regular events. The audience was told how Mandie, from Shrewsbury, had opened her heart and home to countless young people over the years.

The final award, presented by Amanda Round of the host Hadley Park House Hotel, was also met with a huge round of applause.

The Outstanding Bravery Award went to five-year-old Zac Oliver, who was the editor's choice for the way he had fought off a rare type of leukaemia.

He was given the all-clear earlier this year, after receiving lifesaving treatment in Philadelphia, Pennsylvania, paid for with a £500,000 fundraising drive.

Fighting back the tears after the presentation, Zac's mother Hannah said watching him receive the award rounded off a remarkable year.

"It's like we are finishing with a positive ending."

Doug Boulter – Fundraiser of the Year

Doug, 80, has raised £100,000 for charities over the past decade, including the Lingen Davies Cancer Care Fund, Midland Air Ambulance, and the Robert Jones and Agnes Hunt Hospital in Gobowen.

Penny, 11, her brother Dominic, 10, and their friend Charlie, also 10, spent their Easter holidays removing litter from the 79-mile Great Glen Way across the Scottish Highlands.

Suman Bala – Grandparent of the Year

Suman is described by her son Councillor Rajesh Mehta as the ‘grandmother of Telford’, who is even known as ‘grandmother’ by the bus drivers and cabbies. She still visits the nursery school which her grandsons used to attend, where she is known by everyone as ‘Nanny’.

Paulette Bruce – Volunteer of the Year

Known for her infectious energy, Paulette has been the driving force behind Telford Gateway Club for 32 years, organising activities for adults with learning disabilities.

For 12 years ,Brenda was the voice at the end of the phone for people in rural areas who were going through difficult times. She recently stepped down as co-ordinator for Shropshire Rural Support Network.

Teresa Ball – Carer of the Year

Teresa cared for her paralysed father for 26 years after he suffered a massive stroke. Following the death of her mother she moved back to the family home in Ketley, Telford, to look after him. Sadly, he died earlier this year.

Harlie, 11, has spent the past three years helping youngsters cared for by Hope House Children’s Hospice, as a thank-you for the support the hospice gave him when his mother Sonia died in 2011. He makes Easter and Christmas hampers for the youngsters, raises funds, and has collected DVDs for them.

Described as a ‘great tenant’ of Ridgway retirement complex in High Ercall, near Telford, Joyce is always willing to help out with events and activities, helps her neighbours look after their pets if they go on holiday or unwell, and walks them back from events at the complex.

Rob Davies – Teacher of the Year

Rob, or ‘Mr D’ as he is known by pupils, was praised for his work building up the confidence of children with disabilities and other special needs. His positive attitude is a great example to the youngsters.

The chief executive of Wellington YMCA, Mandie is known for her tireless work for a number of good causes in both Telford and Shrewsbury, as well as helping countless young people in the county.

Zac, five, fought back after being diagnosed with a rare form of leukaemia. People raised £500,000 for Zac to receive lifesaving treatment in the US, and the youngster is now cancer free.