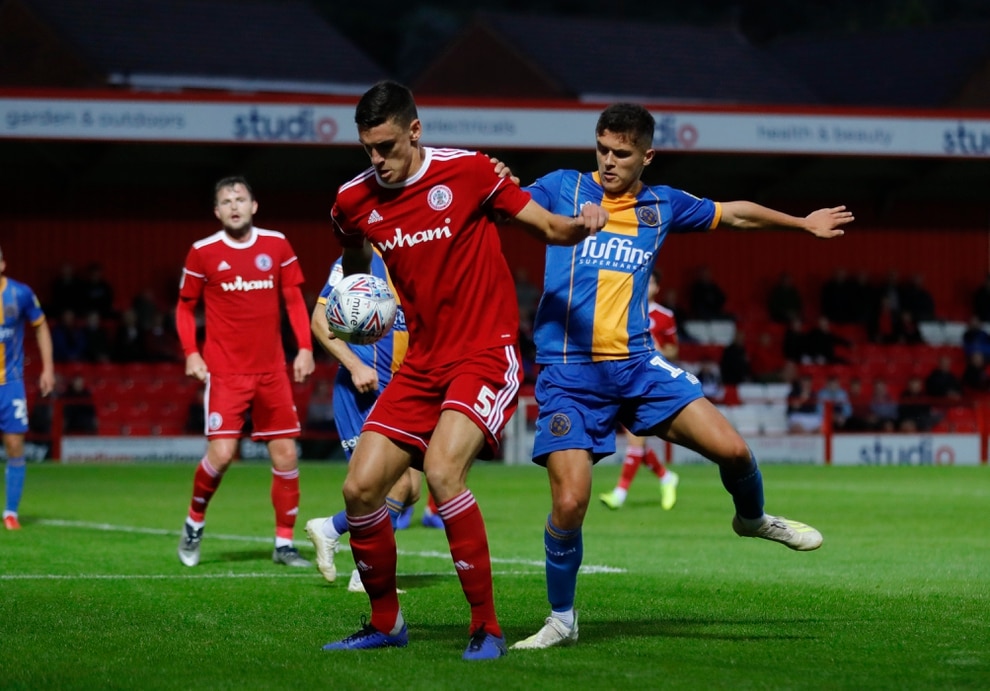 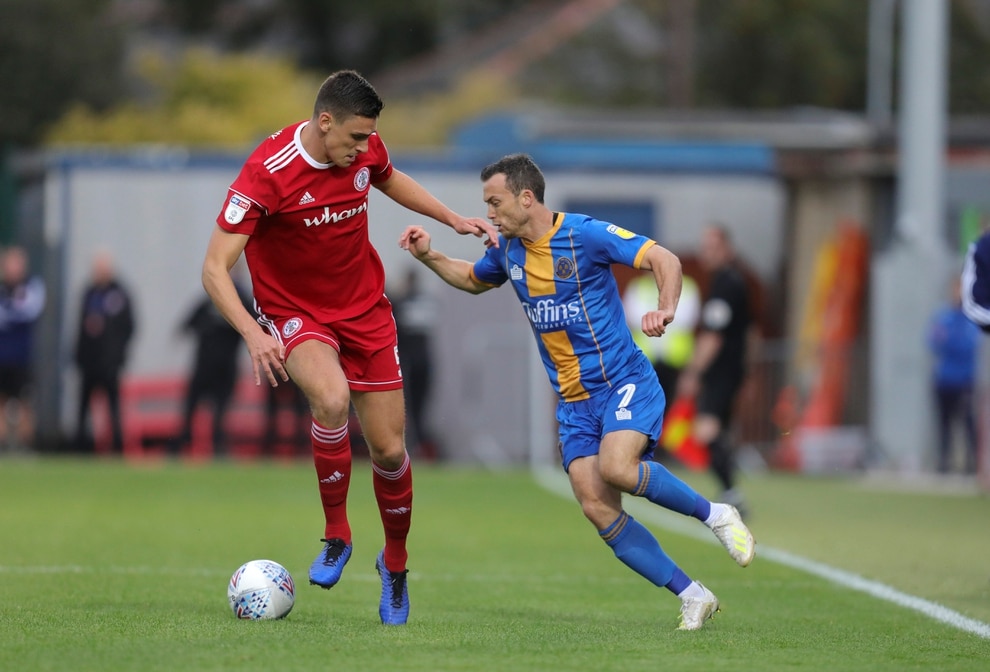 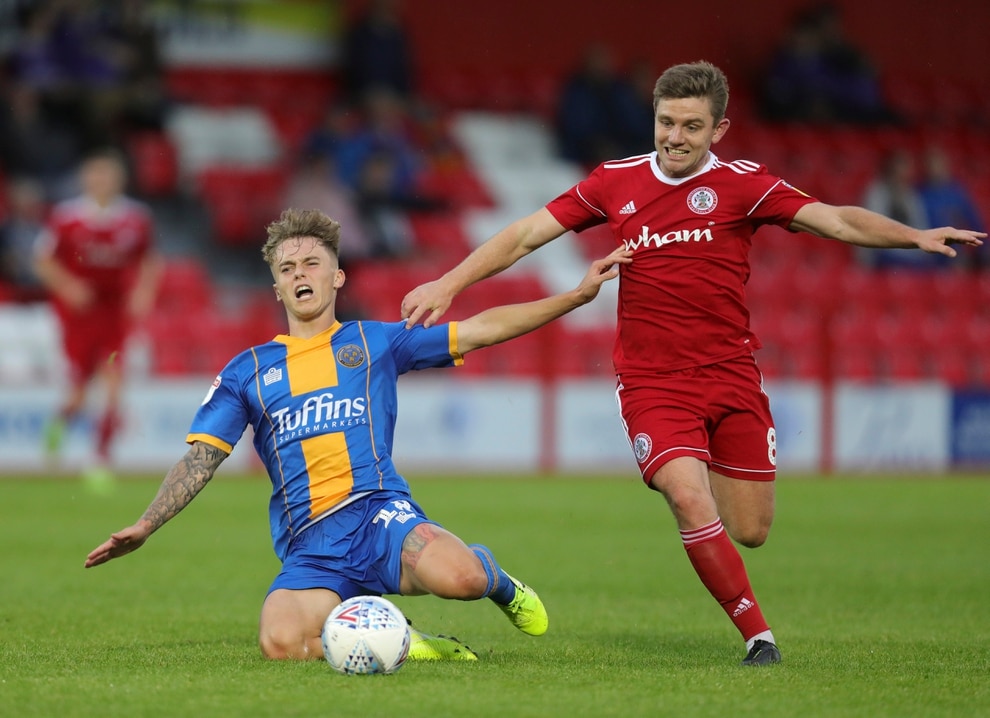 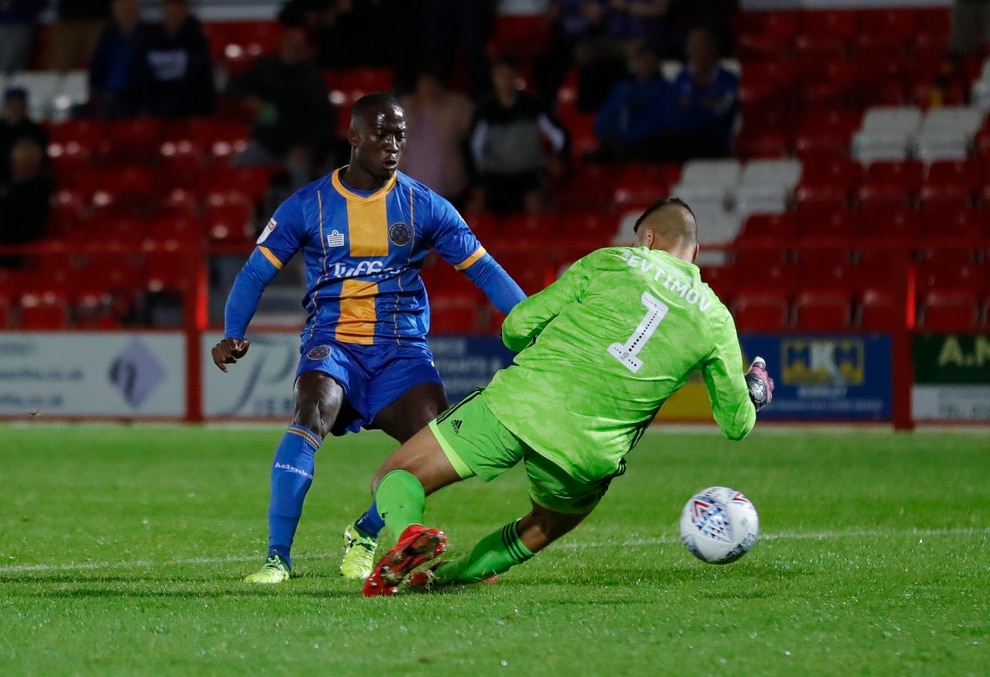 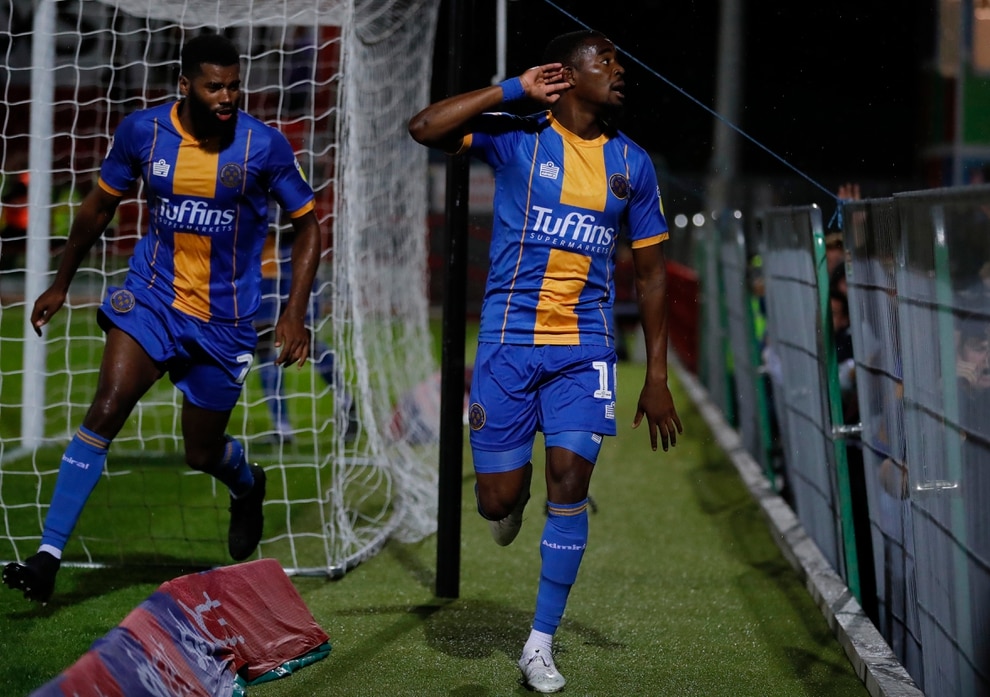 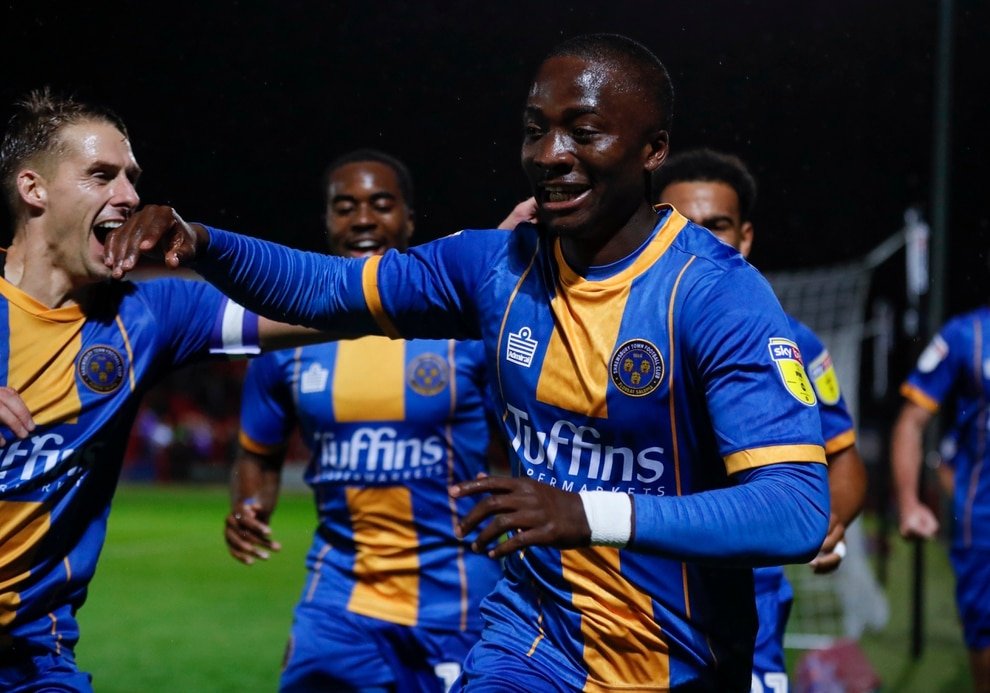 The summer signing from neighbours AFC Telford announced himself to Salop fans behind that goal with the most composed finish after fellow sub Fejiri Okenabirhie had equalised.

Sam Ricketts’ men were 2-0 down in the tightly-fought clash after Colby Bishop’s penalty and Dion Charles’ strike. An own goal halved the deficit with 13 minutes remaining to end a scoring drought before Town’s supersubs took over.

Udoh, recovering from injury, will surely never forget his Town bow. A stunning victory that left the disbelieving away end on their feet and in full voice.

Omar Beckles, former of Stanley, remained in for the injured Ro-Shaun Williams. While another ex-Accy man Shaun Whalley partnered Steve Morison up front.

The only change to Shrewsbury’s 18 was the inclusion of Udoh on the bench. The summer signing from AFC Telford had been missing with a quad injury but his place in the matchday squad was a first in competitive football for Town.

Ricketts’ side lost 2-1 that day, one of the manager’s early games in charge, as talisman striker Billy Kee added a second. Kee was missing from the ranks this time around for personal reasons.

John Coleman’s Stanley had managed a draw and defeat in their first two league games. This was their first home league clash of the season and the stadium had enjoyed a summer facelift. The pitch was totally relaid and looked like a carpet.

Ricketts said his side must be mentally tough enough to come and get a result in Lancashire.

Shrewsbury managed a better start than their last trip to Stanley and a very open, easy-on-the-eye spectacle broke out.

Skipper Dave Edwards was busy early on. A goalbound volley flew off target before his near-post header flew over.

It wasn’t entirely one-way traffic and the hosts showed flashes of their intentions too. A quick Sean McConville free-kick played Clark in but he shot tamely at Max O’Leary.

A loose pass from new-boy Sean Goss caused some issues as Clark struck a better effort this time, drawing a flying O’Leary save.

Goss was showing some classy touches and he put in a perfect left-footed delivery that flew across goal and was turned inches wide at the far post by Beckles.

Shrews’ Morison and Whalley were working well in tandem with Edwards and Luke McCormick. The visitors broke sharply and Whalley lofted in a cross that the onrushing Edwards powered narrowly wide with his head.

Stanley were dealt a blow as Baker-Richardson limped off half hour in but remained a threat. McConville’s strike was parried behind by a fine flying O’Leary save.

Ryan Giles was lively against down the left. He attempted to re-live his opening day Portsmouth heroics but cleared the stand from similar range.

For all of their decent changes and close shaves Town were without a shot on target at the break.

The second period took off just like the first. Ex-TNS man Sam Finley almost turned a corner in at the far post after Shrewsbury had failed to clear.

Straight down the other end and Giles’ cross found his opposite wing-back, the rampant Donald Love, who could only chest narrowly wide.

Salop finally tested Dimitar Evtimov in Stanley’s goal as Whalley darted on to a long O’Leary clearance, he cleverly played in Goss whose first-time finish was straight at the Bulgarian.

Contact from Love on Clark in the Town box mean referee Scott Oldham had a decision to make but he booked the former Shrews man for stimulation.

Ricketts sent Louis Thompson on for the tiring McCormick just before the hour.

And his fresh legs and running power led a 60 yard charge that resulted in Whalley rifling fractions wide with his left foot.

True to form, Stanley broke and McConville tested O’Leary before a flashpoint midway through the second half.

Ref Oldham pointed at the spot as Beckles was judged to have held Bishop. The striker ignored big appeals to dispatched his spot-kick high into the net.

Town had barely drew breath to that blow before first-half sub Bishop hammered a powerful rising finish high beyond O’Leary to double the hosts’ lead.

The goal drought lasted roughly 370 minutes but Giles’ stinging low cross was turned on to defender Hughes by Evtimov and in for renewed hope.

Ricketts immediately sent Okenabirhie and Udoh on for Morison and Whalley in search of a dramatic equaliser.

It was a fine one-on-one save by O’Leary to deny Bishop and, in the driving rain, Town piled forward. Giles’ pace forced a corner and Goss’ fine delivery was buried by Okenabirhie to spark bedlam behind the goal.

With a minute of normal time to play Udoh powered Joe Maguire from underneath a high bouncing ball before tucking under Evtimov for the most thrilling of climaxes. An unforgettable comeback for the ages.