A miserable November last season saw the Bucks fall away after a promising spell of October results, but under Gavin Cowan the 2018/19 Bucks are hoping to prove themselves men for all seasons. 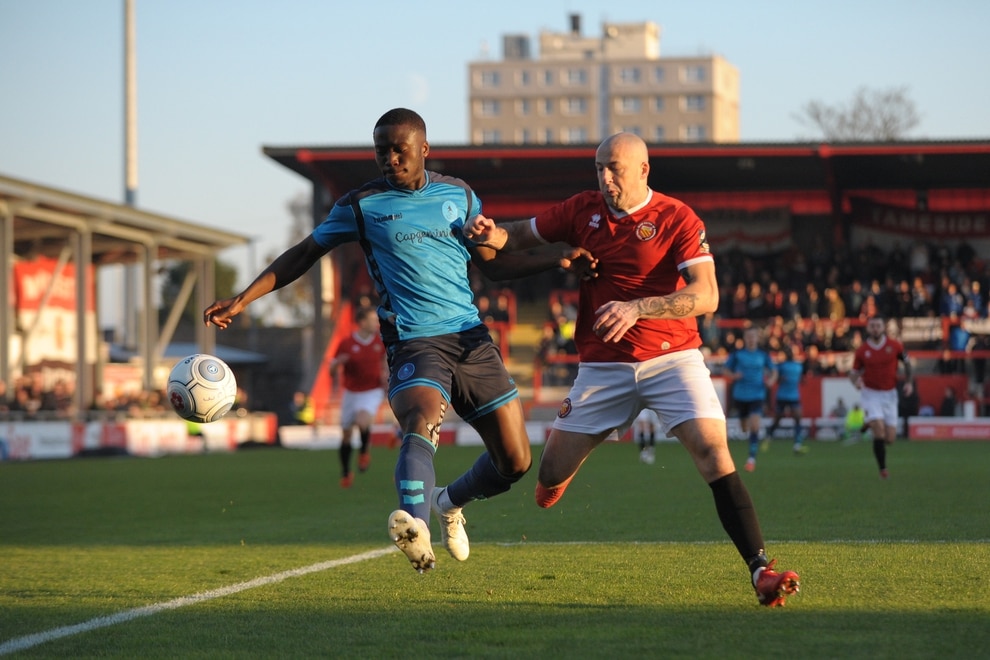 Dan Udoh battles for the ball with Chris Lynch 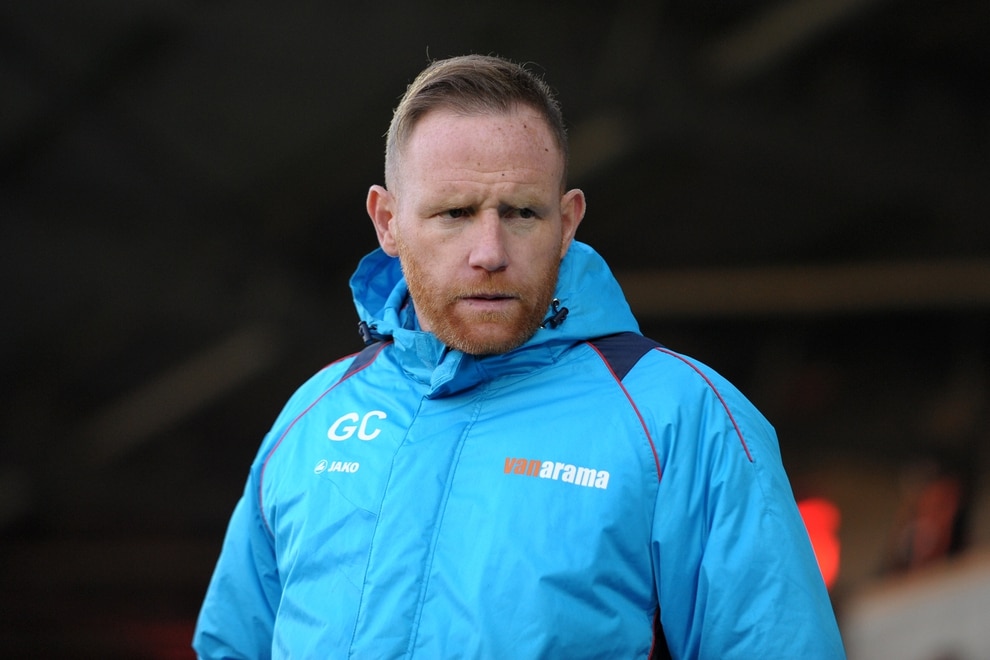 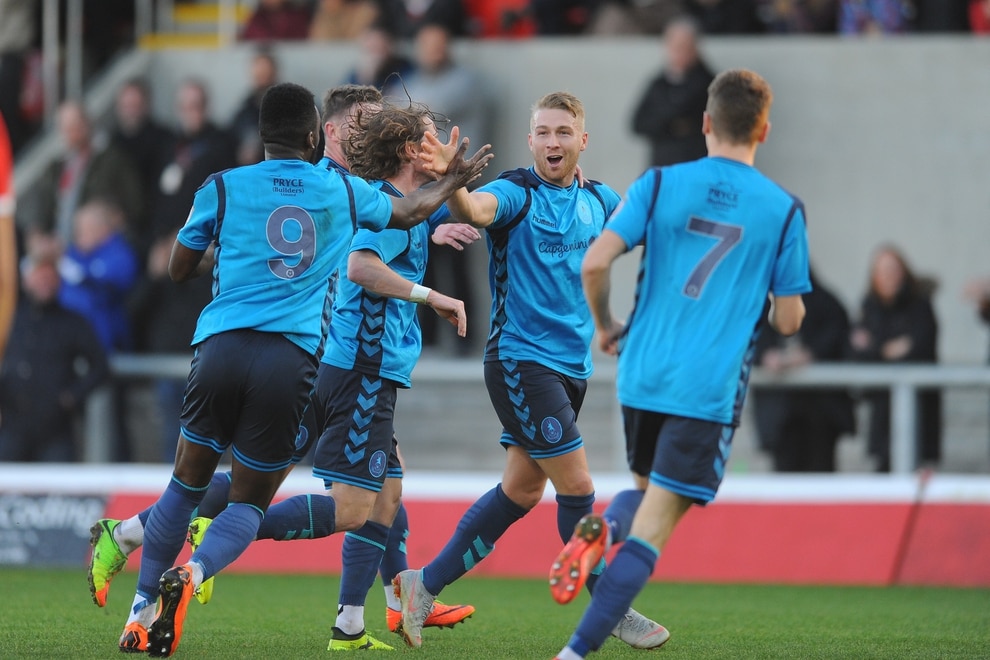 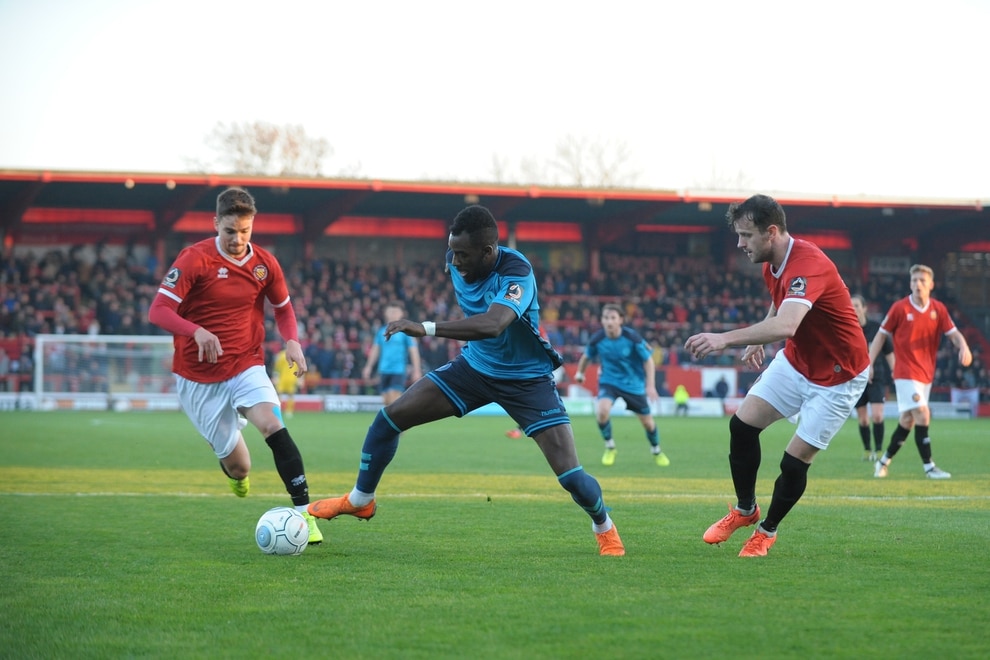 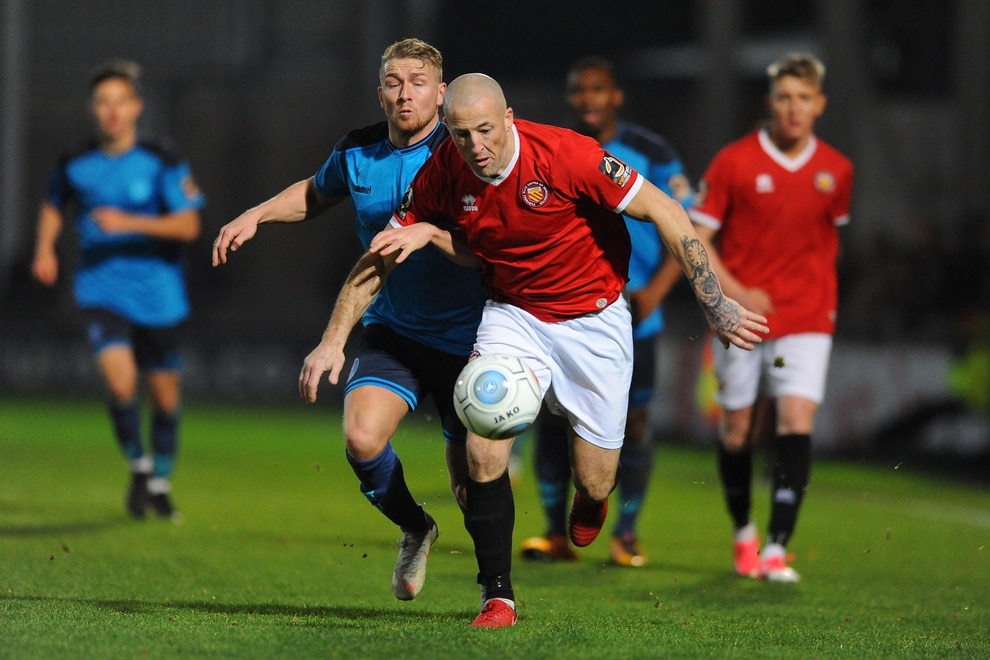 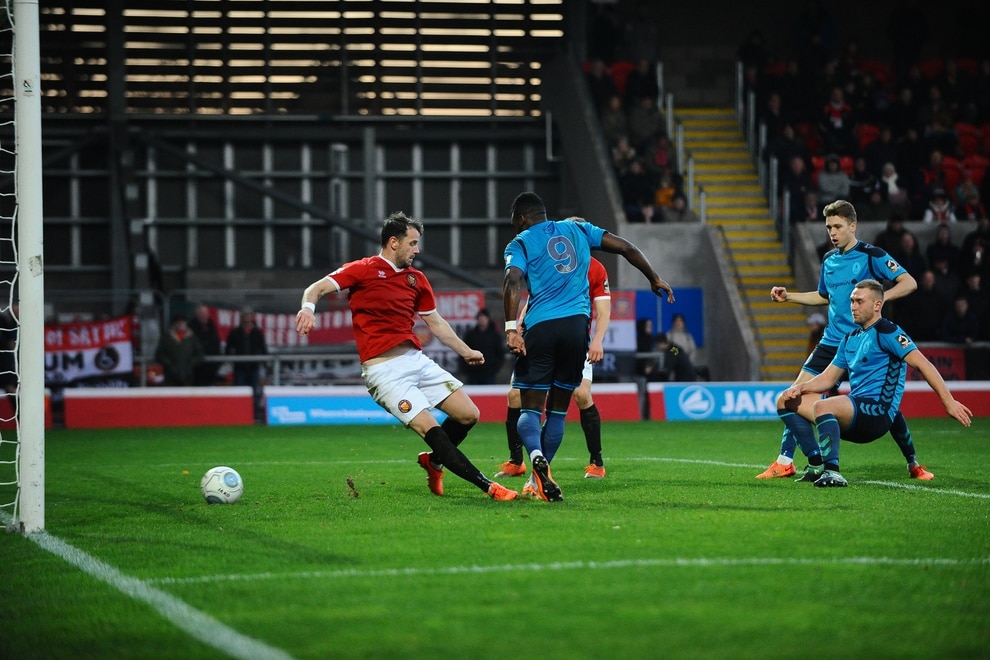 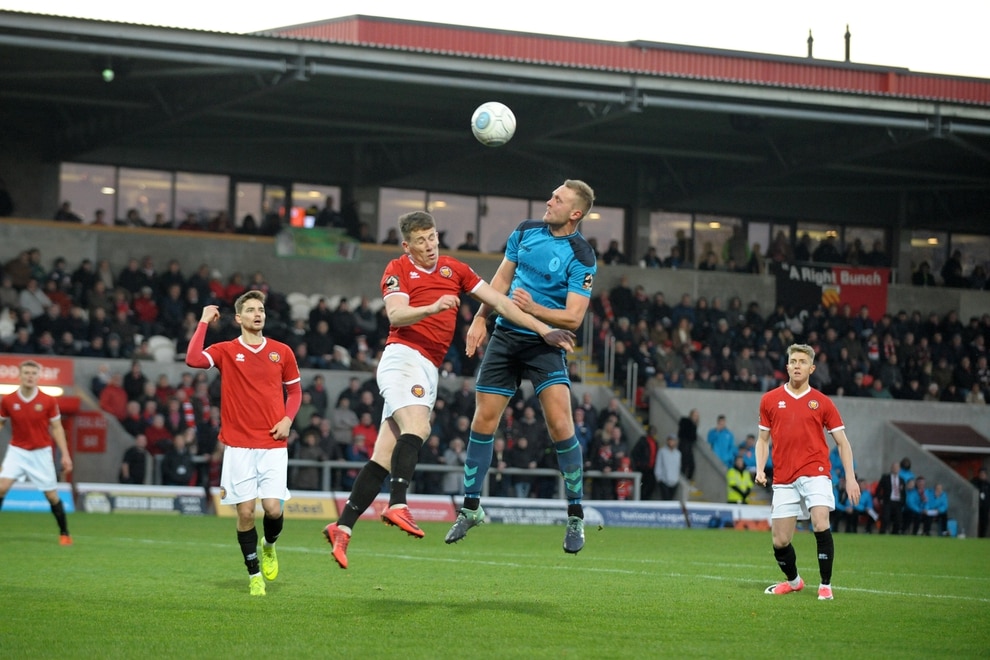 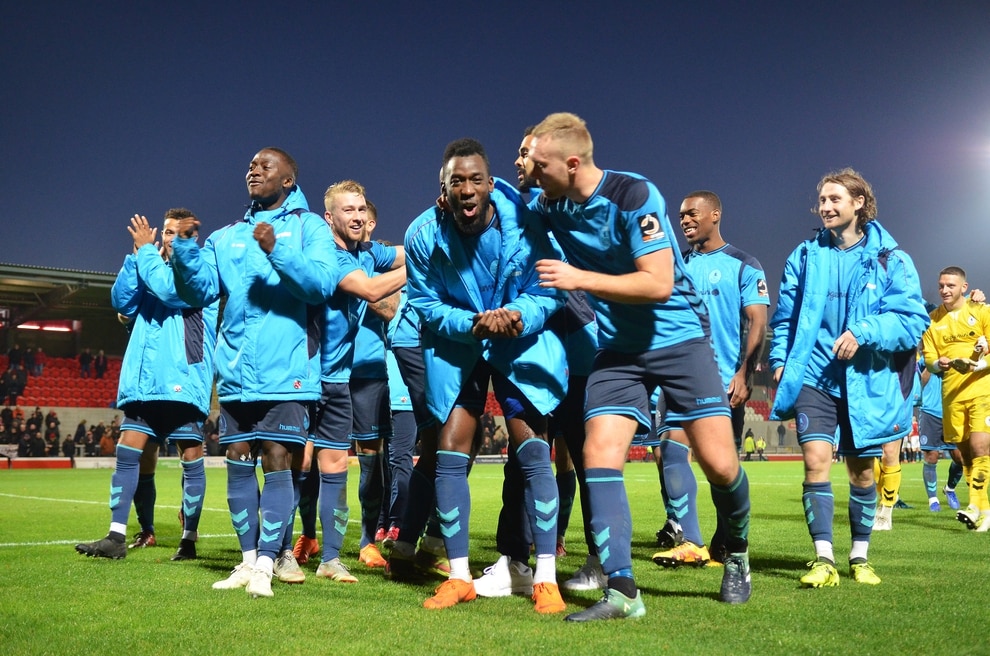 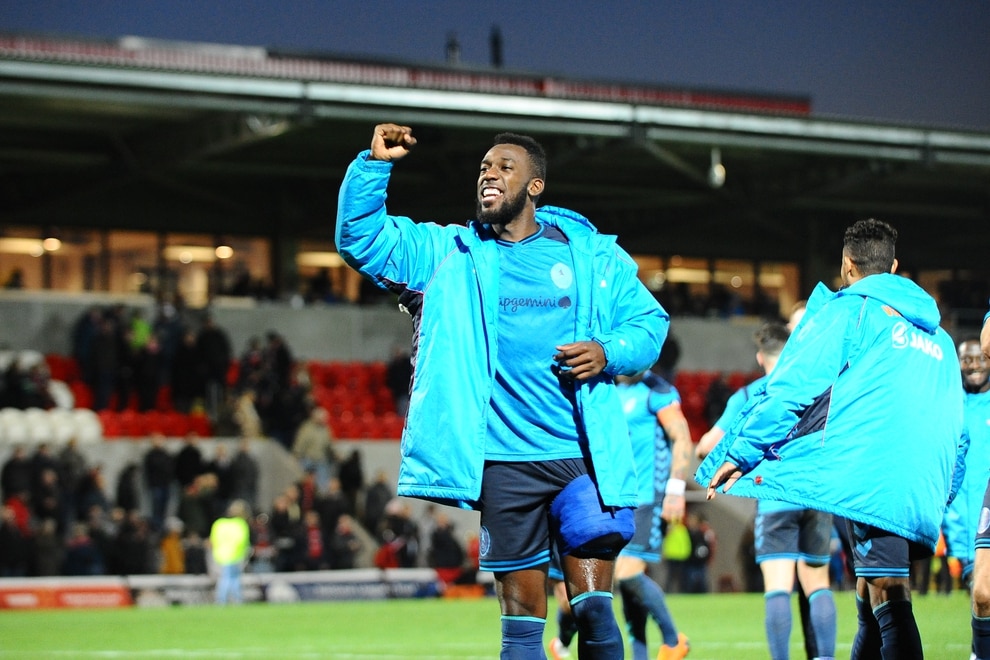 They were deserving winners against an FCUM team who went into the game unbeaten in five matches under new manager Neil Reynolds, and as a result leapt into third place in the National League North.

Cowan’s team made a lightning start to the game, and twice within the first two minutes could have been ahead.

On both occasions it was Daniel Udoh, the Bucks’ top scorer, who went close, first flashing a shot wide from 25 yards and then forcing a fine fingertip save around his post from home custodian Lloyd Allinson from similar range.

The Red Rebels were looking shaky, but looked to bounce back through Kurt Willoughby. The striker, a big hit at Broadhurst Park since his summer arrival, brought a good save from Andy Wycherley on 10 minutes, the Bucks keeper turning the ball aside for a corner.

Theo Streete was then booked for a late, sliding challenge on full-back Lewis Thompson and the Bucks no.6, who celebrated the arrival of his third child on Tuesday, was walking a tightrope for the rest of the game.

Both Henry Cowans and Steph Morley were supplementing the Bucks’ attacks down the flanks, a frequent feature of their five-game unbeaten run.

On 22 minutes they hit the front, and it was Darryl Knights who put them there; a free-kick into the box was recycled on the right and when Udoh’s close control couldn’t find a way through he laid the ball to Knights, fifteen yards from goal.

He needed no further invitation, and drove the ball low past Allinson’s right-hand to score.

The Bucks were value for their lead, but within a few minutes were back on level terms, in a moment that Wycherley will want to forget.

Wycherley was underneath a ball hoisted high into the six-yard box, and there seemed little danger; however, with the home crowd trying to unsettle him he fumbled the catch and former Bucks’ striker Tom Peers gobbled up the chance handed to him on a plate from less than six yards out.

The Bucks responded well to the setback. Allinson prevented a Udoh opportunity from a low cross by Amari Morgan-Smith, and the latter closed the half by skimming the top of the crossbar with a curling, dipping shot from 25 yards.

The hosts did have claims for a penalty when Willoughby tumbled in the box just before that, a reminder that they were still in what was a very open contest.

Just over ten minutes after the restart the Bucks retook the lead, and it was Morgan-Smith who was in the right place to capitalise on home keeper Allinson’s error.

A Steph Morley cross from the left looked like bread and butter to Allinson, but he didn’t handle it and Morgan-Smith forced the ball in.

The home side, and Allinson in particular, claimed a foul, but referee Amy Fearn was unresponsive to their pleas and the goal stood, reward for another industrious display from Morgan-Smith.

As they had after Knights’ goal, the Red Rebels tried to counter-punch, but the Bucks took control and slowly strangled their hopes of getting anything from the game. In one of the rare opportunities they earned, full-back Joel Senior was unlucky to see his fine 25 yard free-kick beat the defensive wall but thump back to safety off Wycherley’s right-hand post.

However, the final 30 minutes were largely all Telford. Wycherley put his gaffe behind him to handle those efforts the hosts were able to muster, and they were rare. The Bucks were pressing from high up the field, with every player buying into Cowan’s game plan, none more so than Jonathan Royle; he marshalled the midfield and seems to be flourishing under Cowan.

There was still time for some late drama. Substitute Andre Brown got behind a stretched home defence and he looked to chip and chase the ball over Allinson. The keeper, outside his area, thrust out a hand to deflect the ball and the Bucks appealed for his dismissal, but referee Fearn appeased the home crowd by showing just a yellow card.

It mattered little. Cowan’s side ran down the clock and were able to celebrate an almost text-book away performance in front of their travelling fans.