As some students marvelled at their A-level achievements as results were handed out in peculiar fashion, a growing number are preparing to appeal their downgraded scores in a last-minute system which received widespread criticism.

Young people had been bracing themselves to receive results based on teacher predictions – but a turnaround by the government less than 48 hours before the day meant a brand new approach was being taken.

Numerous colleges throughout Shropshire have confirmed they are using the appeal process to have their students’ grades reviewed.

Students and staff at Haberdashers’ Adams grammar school in Newport reported a successful year, with a 99 per cent pass rate and 74 per cent of results graded A*-B.

Gary Hickey, headmaster, said they were pleased with the “vast majority” of results.

Mr Hickey said: “A combination of classwork, homework and regular tests throughout the year meant their teachers had all the information needed to submit grades to the examination boards and we are delighted that the vast majority of grades have been confirmed by the Office of Qualifications and Examinations Regulation (Ofqual).”

At Bridgnorth Sixth Form, run by Oldbury Wells School, top achievers secured places at some of the country’s top universities.

Mrs Godden added: “There were however some unexpected results in the mix this year and some that we are certain pupils would have bettered if they had been able to sit exams.

“These are the students who have had their grades lowered by the exam boards from those suggested by their teachers.”

Nationally, girls have extended their lead over boys in the top grades.

The proportion of girls who got A or higher was 28.4 per cent, 1.1 percentage points higher than boys.

And this showed at Wrekin College, which boasted a 100 per cent pass rate among its female pupils.

“This helped the college achieve its best set of A-level results in six years, with almost a third of results recorded at A-A* grade.

Headteacher Tim Firth said: “Not only are today’s results the best for six years, but they are among the best we’ve ever had.

“This is no mean feat given the upheaval wreaked by the Covid-19 pandemic over the last few months.”

Mr Firth added: “While these results are impressive, in many ways some pupils should have done better but have fallen foul of the way some of the calculations appear to have been made by exam boards.”

As teaching staff worked around the clock with students to appeal grades and prepare them for their future, Ellesmere College headteacher Brendan Wignall said he had “grave concerns” about how results were being calculated. He said: “We have grave concerns about the processes applied by the examination boards and the outcomes that are revealing an unfair and illogical system.

“We expect the government to work speedily to resolve things.

“Our primary focus is on reassuring and supporting our students now whilst we wait for the response from the awarding bodies and the government in due course.

“Given the manifest unfairness of the processes used we will not be issuing the normal news update focusing on exam successes.

“While we are delighted with the results that some of our students have been awarded, a much more important issue is ensuring that all our students are treated fairly.”

Meanwhile, Shrewsbury Colleges Group said it was “genuinely proud” of the efforts of all those associated with the sixth form.

More than 50 per cent of students received an A* to B grade at A-level or a Distinction* or Distinction at BTEC. The overall pass rate was 98 per cent.

Having congratulated students on their achievements, principal James Staniforth said: “We, like almost all sixth form colleges across the country, have seen a downward adjustment applied to the assessed grades that we submitted.

“The overall impact on our results this year is that they were lower than the results last year and they are lower than our three-year average.”

At Adcote School for Girls in Shrewsbury, 61 per cent of grades were recorded at A*-A, with 80 per cent of all grades receiving A*-B.

The high marks mean 71 per cent of sixth formers secured their first choice university, with some including courses at Oxford, Warwick, Birmingham, Cardiff, Liverpool and University College London.

The “very talented group” of students at William Brookes School Sixth Form in Much Wenlock performed in line with many of the school’s predictions, said headmaster Geoff Renwick.

In what has no doubt been a challenging time for students, nearly a quarter of all grades were recorded at A*-A and three quarters at A*-C.

Like others across the county, the sixth form confirmed it had made appeals for some students but that most received their expected grades required to attend their university or apprenticeship of choice.

Many students are now looking forward to taking up their places at university or higher level apprenticeships, whilst others are moving into employment.

Colleges under the leadership of the Marches Academy Trust were celebrating their success.

In Whitchurch, nearly half of all students at Sir John Talbot’s Sixth Form have been awarded at least one A*-B.

The Grove School in Market Drayton, which is also run by the Marches Academy Trust, is continuing its achievement with a solid set of A-level results. The school said it was a “great relief” to know that students were successful despite a large portion of the year being taught remotely.

The Marches Sixth Form in Oswestry admitted the academic year has been “challenging” across the school and sixth form due to the impact of the coronavirus pandemic, exacerbated by this cohort of students ending their school careers and exam preparations so abruptly in March and the uncertainty around doing so.

But the establishment expressed delight at its students’ achievement and said “it is a great relief to finally know that students’ and the teaching team’s hard work over seven years at the school has been rewarded”.

Teachers celebrated with students on site, despite less teaching staff being able to attend than normal due to social distancing measures on what is usually a busy and emotional day.

Ofqual, the exam regulator, has launched a special helpline for students and parents. 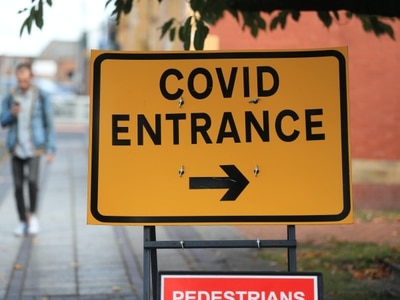