In this unprecedented time full of uncertainty, it has been superb to see Raul Jimenez provide some good news by saying he wants to stay at Wolves.

Nuno Espirito Santo gave him a chance, and the Mexican has firmly made a name for himself – and he sounds keen on repaying that faith from the boss for as long as possible.

Jimenez, when asked about his future in an online Q and A, pointed out his contract at Molineux runs until 2023 and went on to say ‘I don’t need to qualify for the Champions League to know I want to stay here’.

The 28-year-old has always seemed happy at Molineux – you have only got to look at the performances he has put in and the goals he has scored – but it is nice for him to come out and say it outright.

After all, I cannot see any reason why he would want to leave.

Jimenez has scored 22 goals in 44 games in all competitions this season and that is unbelievable – scary.

What has really struck me, too, is when he has not been at his best but still managed to find the net.

At Tottenham, for example, he had a very quiet game but then came up with a piece of brilliance to win it towards the end – something we will all remember for many years to come.

Jimenez can score goals for fun as he has the talent, the work-rate and – most importantly – the supply.

It is not as if he has running his socks off, doing a lot of work for the team, and getting nothing in return.

He gets chances in every single game he plays, so no wonder he is happy being here.

Real Madrid, of course, have been linked with Jimenez in the Spanish press.

And even though he has come out and outlined his commitment to Wolves, such speculation is likely to continue over the next few months.

It shows how far we have come when our players are being associated with such teams.

The ultimate question, though, is whether Jimenez can fulfil his ambitions – winning silverware – at Wolves?

For me at least, the answer to that is an emphatic yes.

Over the last few days, meanwhile, we have seen many leagues in the men’s non-league game and the women’s game deemed null and void.

My heart goes out to all at Wolves Women who have worked so hard this season, only to have the term ended and their results expunged.

They were well on course for promotion – nine points clear – so they will be gutted with how things have panned out.

Hopefully they can stick together during this virus, as we all need to do, and come back stronger next term.

Nuno’s lot remain in the dark as to when the season will restart and my view is still that the season should be carried on – no matter how long it takes.

If it means playing the remaining games behind-closed-doors, or at least a few of them, so be it

Finally, I just want to say how rewarding it has been being a part of the Wolves at Home scheme, calling elderly supporters and reminiscing.

The biggest thing for me is that everyone me, John Richards and Kenny Hibbitt have spoken to is that they have had some form of support.

It has been lovely to hear and, again, let’s stay home and all do our bit to get through this as quickly as possible. 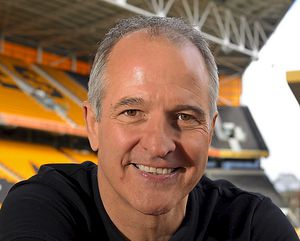 Wolves medic Danny Fishwick delighted as he heads back to Chorley

Matt Maher: Why Ally Robertson was praying for anyone but Chorley for Wolves

Wolves medic Danny Fishwick delighted as he heads back to Chorley

Matt Maher: Why Ally Robertson was praying for anyone but Chorley for Wolves

Much Wenlock | 5 hours ago

Couple stranded in flooded home with water too deep for travel