Shrewsbury Town were dealt a sucker punch as Rhys Healey’s deflected strike in the third minute of added time condemned them to defeat at MK Dons, writes Lewis Cox at Stadium MK. 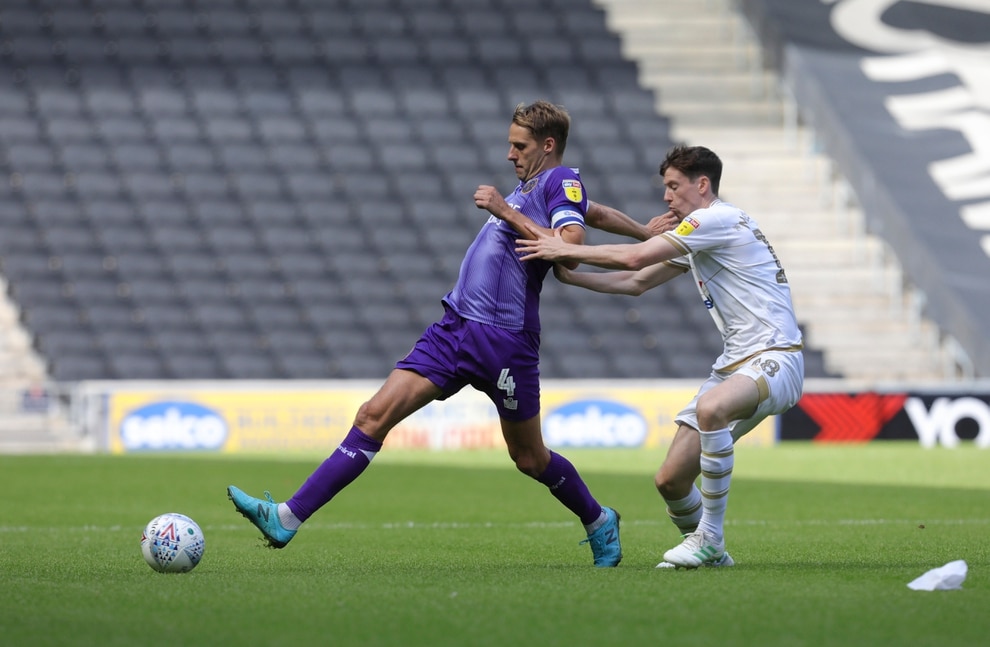 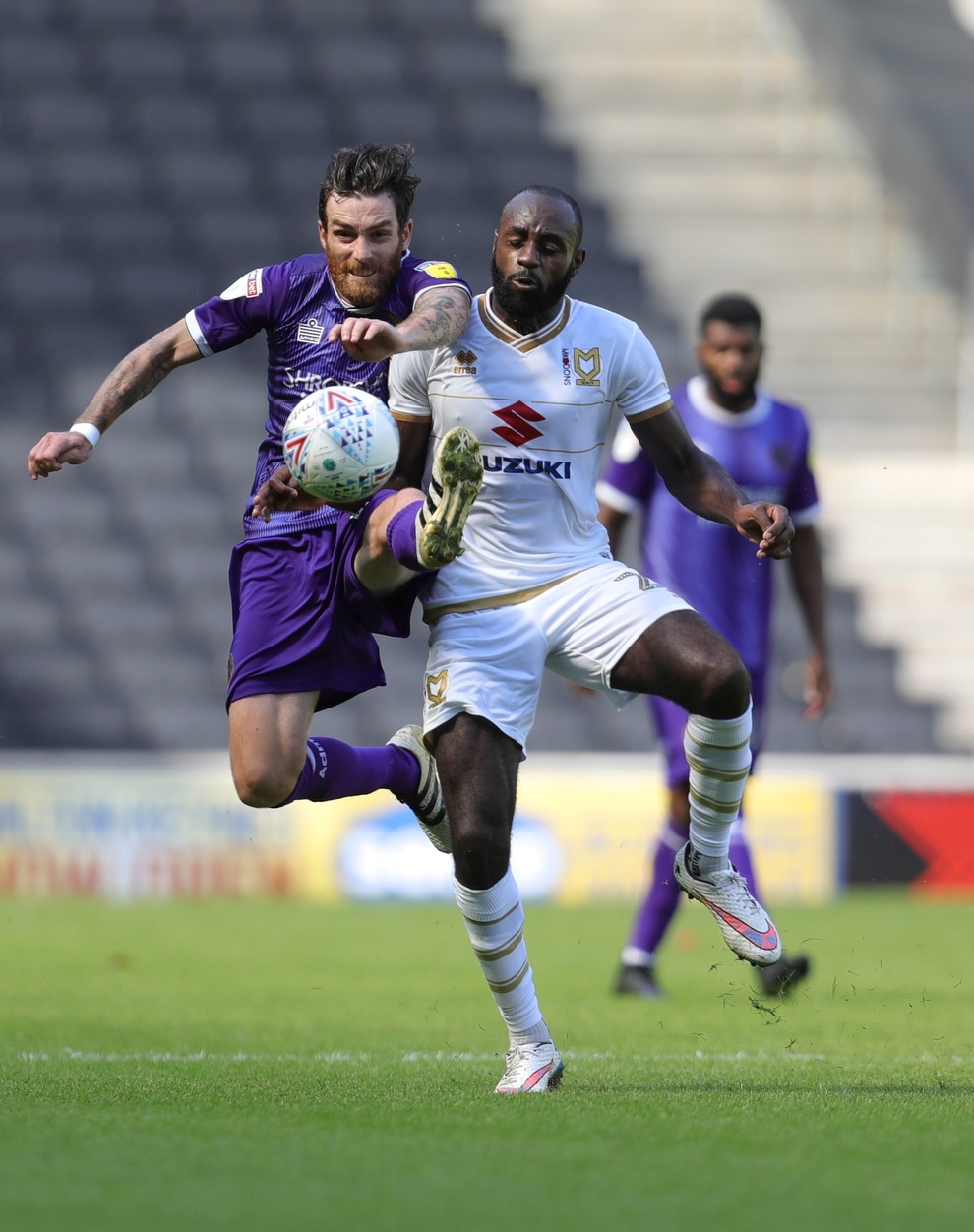 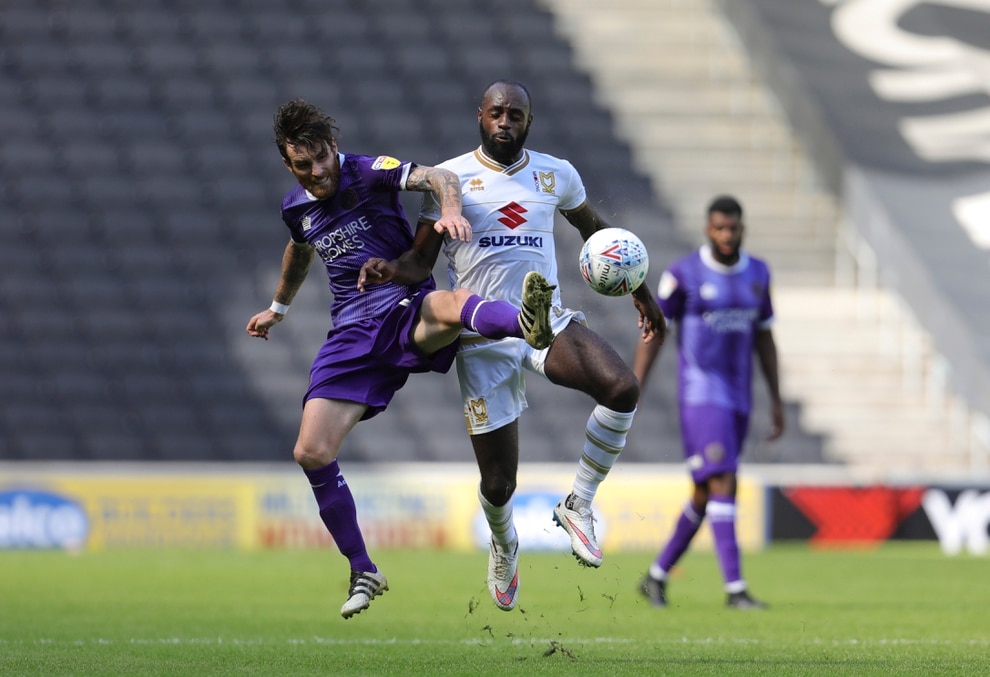 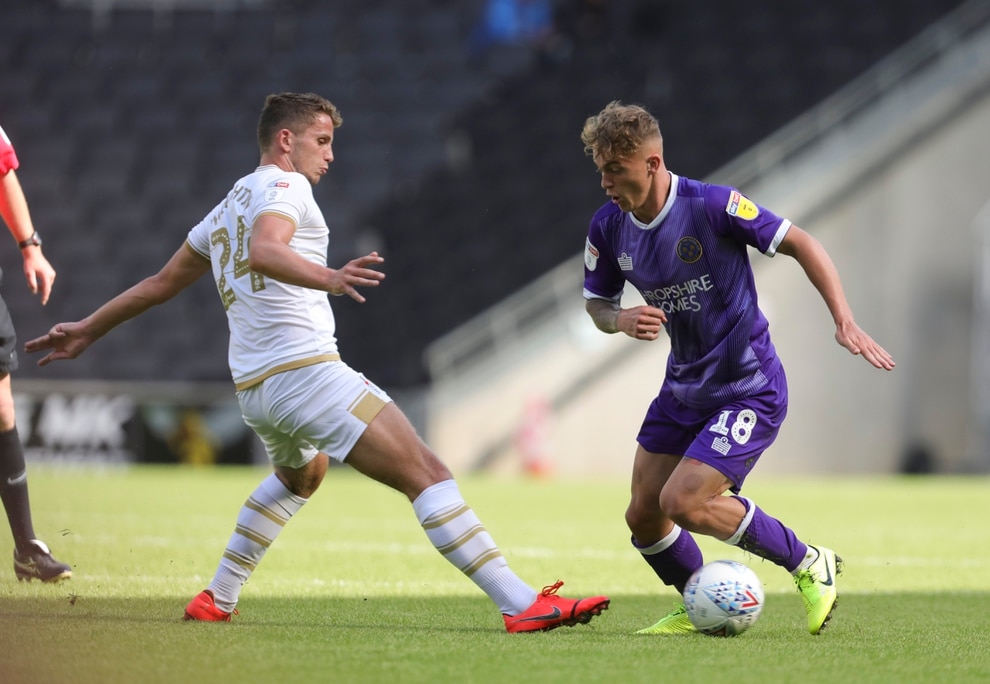 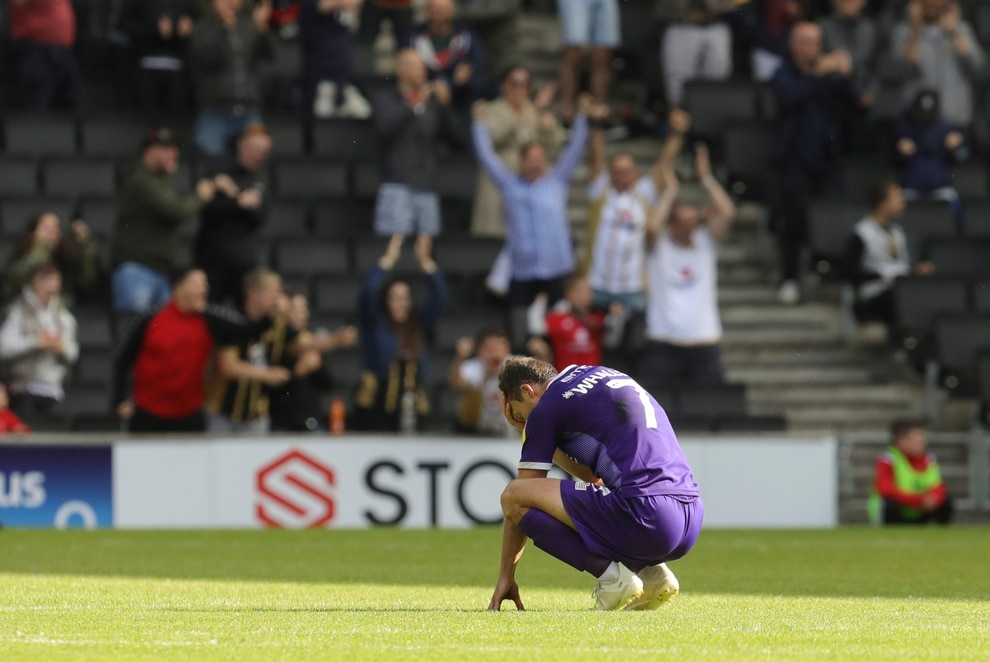 A dejected Shaun Whalley of Shrewsbury Town after Rhys Healey of Milton Keynes Dons scores a goal to make it 1-0. (AMA) 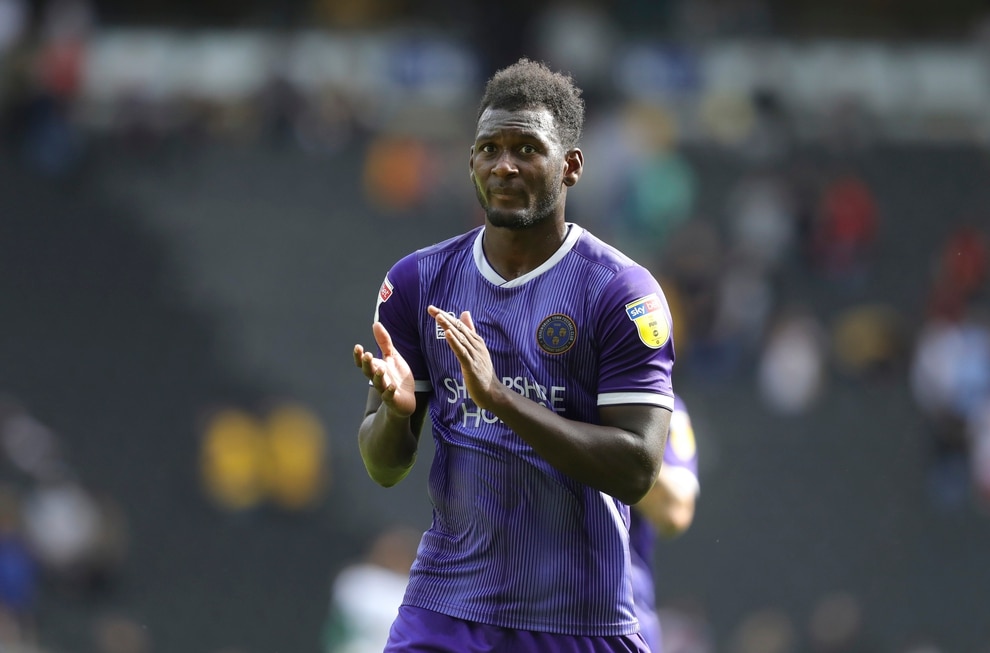 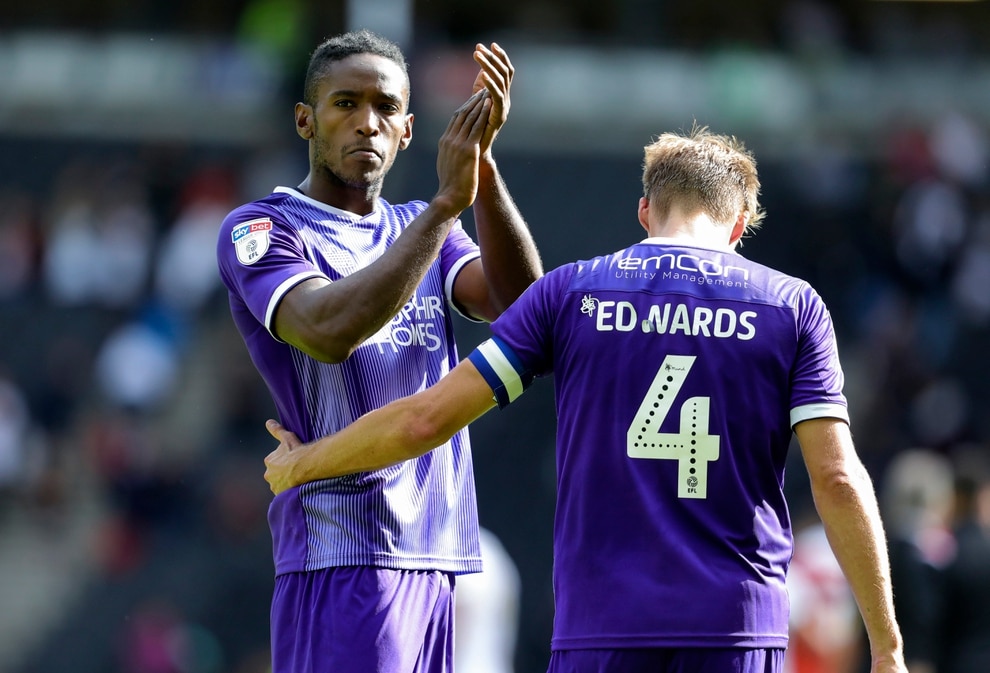 A dejected Omar Beckles and Dave Edwards of Shrewsbury Town react at full time after losing the game 1-0. (AMA)

Sam Ricketts’ Town looked the more likely to break the deadlock in an underwhelming game that severely lacked quality in the final third.

Both sides were uninspiring in front of goal and it was fitting that a scrappy effort told late on as sub Healey - a summer signing from Cardiff - crept inside the box and hit a tame effort that flicked off Ethan Ebanks-Landell and edged over the line.

Shrewsbury looked to be heading towards back-to-back clean sheets to start the season, while Dons re-wrote the script late on for a winning return to League One for Paul Tisdale’s hosts.

Neither side worked their opposite keeper until Dave Edwards’ fierce volley three minutes from normal time as numerous crosses into both boxes and passing moves broke down.

And Healey’s winner makes it seven without victory against the Dons for Town and leaves Ricketts rueing a sloppy display after the positives of last week’s curtain-raiser against Portsmouth.

Town impressed their supporters in the opening day victory over Portsmouth and boss Ricketts made just one change to the starting line-up as Fejiri Okenabirhie dropped out.

In his place came Shaun Whalley to play in a front two role alongside Steve Morison. Ricketts had spoke in the week how he saw Shrews’ No.7 being able to occupy that advanced role - alongside a couple of others.

Whalley was extremely effective coming on against Pompey at Montgomery Waters Meadow, as was Josh Laurent, who was unfortunately missing from the 18 with a muscle injury he picked up.

Okenabirhie was joined on the bench by exciting young midfielder James Rowland, involved in a league matchday squad for just a second time.

While Ricketts’ men were some way into their stride after last week’s opener, for the hosts it was their curtain-raiser after promotion back to the third tier after their scheduled game against Bury was postponed due to the Shakers’ financial woes..

Paul Tisdale, former long-term Exeter City manager, guided the Dons back to League One at the first attempt thanks to a third-placed finish.

The Buckinghamshire side, who were unbeaten in six meetings with Salop, made seven new signings over the summer, two of which made debuts.

A healthy Town following of more than 450 braved the blustery journey down the M1. They had not seen their side win at Stadium MK since a 3-2 success in 2013, where Tom Eaves hit a brace.

Fond memories of Andy Cooke’s heroic double in the 2007 League Two play-off semi-final live long in the memory, but Shrews under Ricketts were looking to build on an encouraging summer and first game of a new era in the manager’s first full season.

There were fears the severe wind could affect proceedings and act as a leveller for the sides, but the towering stands inside Stadium MK did a decent job of sheltering the players from the elements.

Little separated the sides inside the first 10 minutes. Both had short spells on the ball. Dons had the first effort through a Jordan Bowery volley that flew over but Ricketts’ men looked the more comfortable.

The clear ploy to use diagonal passes to invite wing-backs forward was again on display, with Town looking to exploit 35-year-old long-serving skipper Dean Lewington, playing at left wing-back for the home side.

Good switches of play from Ro-Shaun Williams and Luke McCormick had Donald Love on his bike in the early moments.

The visitors were dealt a real blow just 12 minutes in as Williams limped off to be replaced by Omar Beckles.

The former Manchester United defender had been charging back to win the ball he had carried out of defence after Edwards lost possession.

It was a chance for Beckles to catch the eye of his manager but Town were disappointed to lose one of the three defenders that had been so solid against Portsmouth.

Whalley’s influence on the action grew as he buzzed around in forward positions, playing just off Steve Morison - who made his loan from Millwall a permanent deal in midweek.

Great work from Whalley, picking the ball up on the left, running at his man and crossing low for his strike partner, created the best chance of the game 20 minutes in. Morison, eight yards on, spun and dug a left foot at it but the effort flew wide.

Flocks of fans sitting in the first few rows around the stadium were sent running for cover midway through the first period as the sky darkened and the heavens opened. Edwards sent a tricky near post header over from a corner for Salop.

Chances were pretty few and far between in an encounter with no real flow where atmosphere came and went every 30 seconds in the sparse stadium.

Agard played Callum Brittain inside the right of the Town area but the wing-back could only send a stabbed effort over Max O’Leary’s crossbar.

Town momentarily clicked into gear as Giles sped past George Williams - who is no slouch - down the left and a fine low cross had Dons panicking.

The ball flew across goal for Love to rifle goalwards first-time. The strike was well-blocked before McCormick fluffed his lines from the edge of the box.

The hosts were fortunate as referee Brett Huxtable failed to spot a Joe Walsh tug on Whalley inside the penalty area after the defender’s weak backpass.

The game was severely lacking in quality as McCormick ambitiously volleyed well off target before Jordan Houghton fired comfortably wide.

It was Whalley and Giles causing the damage for Salop, who just edged the first period, and the latter again flew past his defender to cross into the six yard box where a plethora of bodies almost turned the ball home.

Edwards steamed in, but it looked like defender Walsh who helped it agonizingly on to his own crossbar.

The deadlock hadn’t showed many signs of breaking in the first period and Ricketts, pondering on the touchline with Graham Barrow and Brian Jensen, would have wanted more in certain moments from his midfielders.

Whalley was like a whippet again as the action re-started, latching on to a hospital pass and darting past Russell Martin, where all the veteren defender could do was unceremoniously hack Whalley down for a caution.

Quality was again lacking in certain departments for both sides across the pitch in what began a mostly lethargic second period.

Shrewsbury continued to look the better side and the team to most likely trouble the scoreline. Ricketts’ side clicked through a gear after the hour and got into better positions.

Giles and Love sent in some decent crosses but Town attackers failed to read the deliveries. Likewise Shrews’ final ball around the edge of the box was often off-target.

Dons almost stung their visitors on the break as Hiram Boateng delivered but Bowery could not convert. Boateng’s cross was then tipped over by the concerned O’Leary.

From that corner Pierre broke like lightning and made up half the pitch as the visitors scarpered forward four on three but the centre-half failed to pick the right pass out.

Ricketts sent on Brad Walker and Okenabirhie to try to make the difference with 12 minutes to go.

Salop might have been fortunate to escape giving away a late penalty as Pierre and Ebanks-Landell got in each other’s way. Pierre collided with a Dons man but Brett Huxtable waved play on.

And the final few moments belonged to the visitors as they banged on the door in search of that winner.

A succession of corners were not taken advantage of but it from further out that Shrewsbury almost stole it.

Firstly Edwards struck a perfect bouncing volley and it arrowed towards the top corner, bringing a flying save out of Lee Nicholls.

Romain Vincelot, who was busy again throughout, then sent a deflected volley just wide through a sea of bodies before last week’s hero Giles almost repeated his magic with a 22 yard strike that just swerved off target.

There was still time for home defender Williams to lash into the near post netting before Love blasted off target. A Dons low cross flew across the box when it was begging for a touch.

You wondered if the game was growing towards an unlikely crescendo and so it did.

Sub Healey took a pass on the right of the Dons box, stepped inside on to his left foot and a tame effort flicked off Ebanks-Landell, wrong-footing O’Leary and creeping beyond the keeper.

A sucker punch for Ricketts and his men in a game that they never should have lost.