Newtown bypass: Shape of things to come as work passes halfway stage - with pictures and video

Jonny Drury takes a look at progress on the long-awaited Newtown bypass. 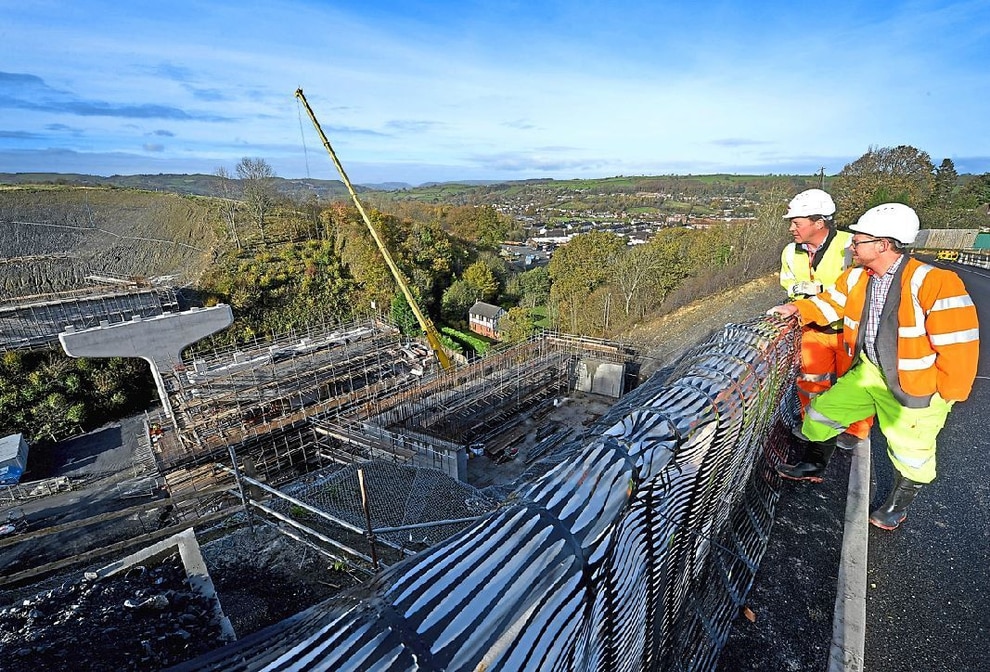 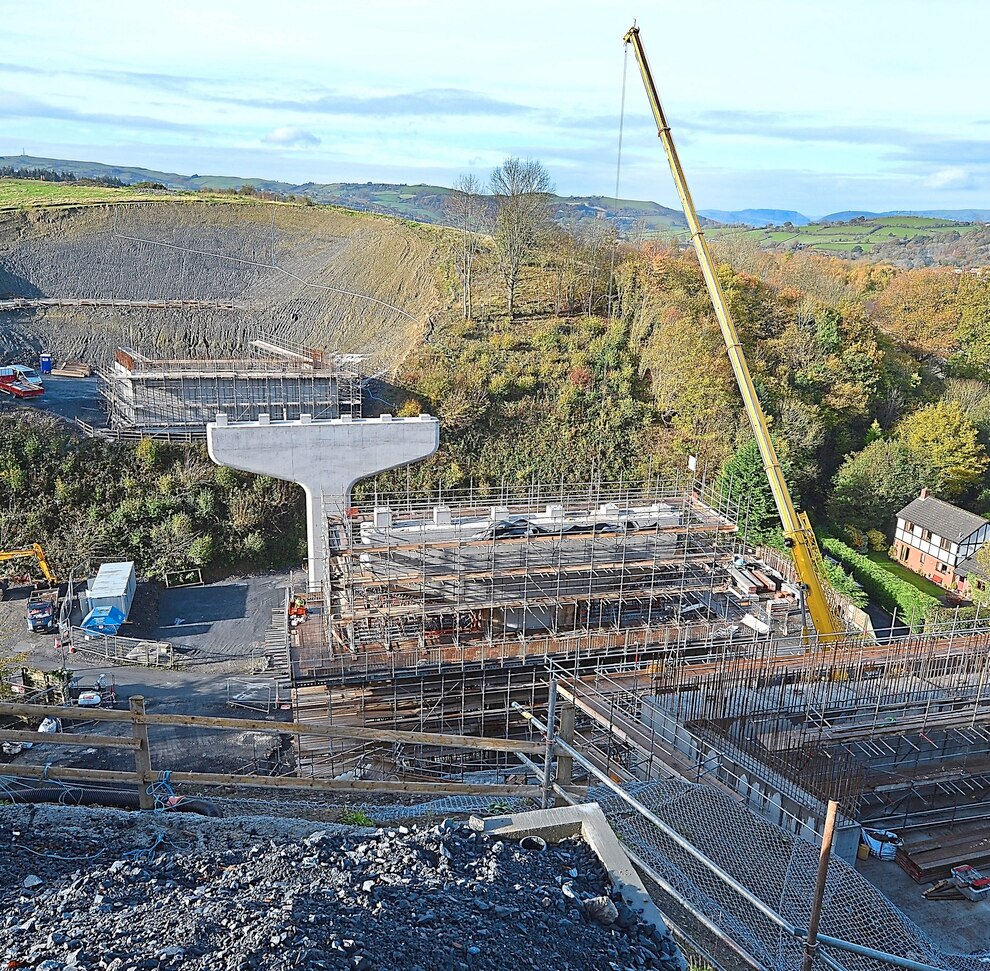 Construction of the Dolfor Bridge, which is the largest structure on the bypass, as work continues to try to bring the project in ahead of schedule 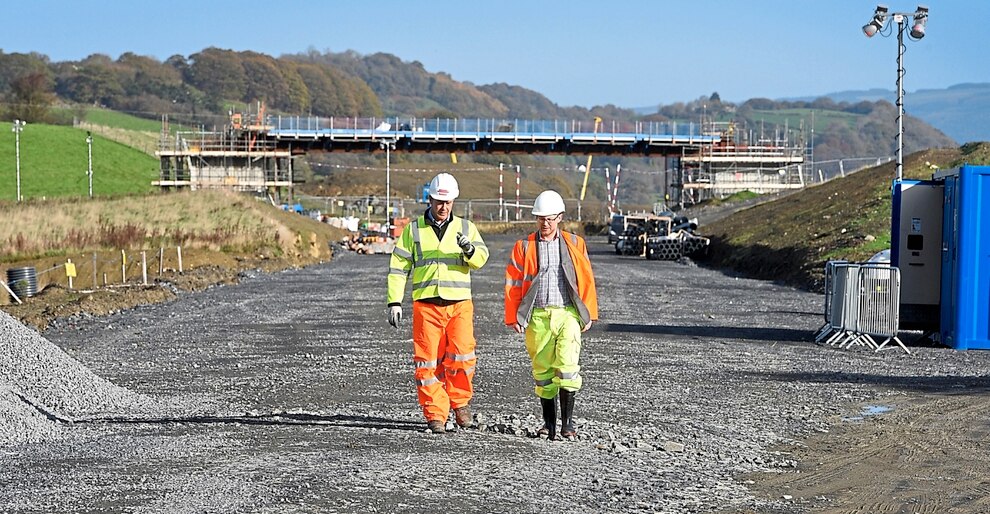 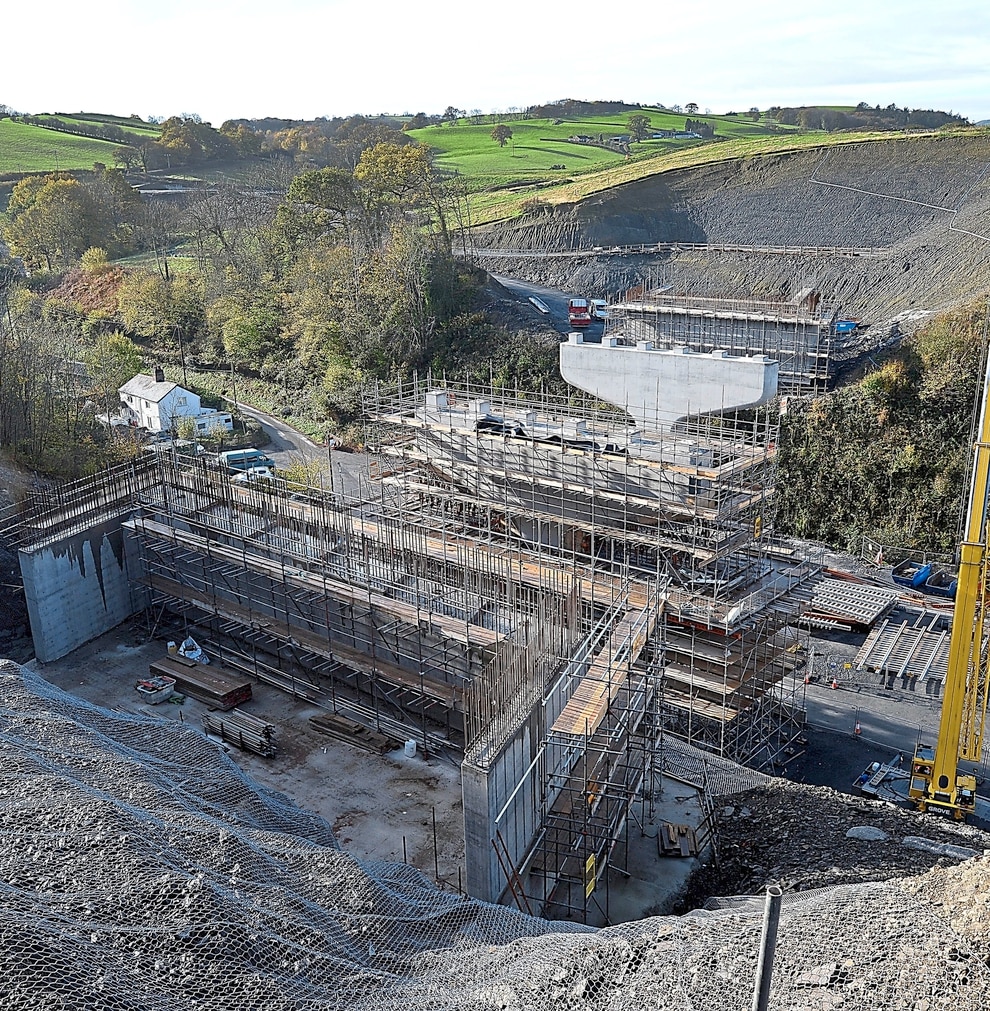 Construction on the Dolfor Bridge is an impressive sight 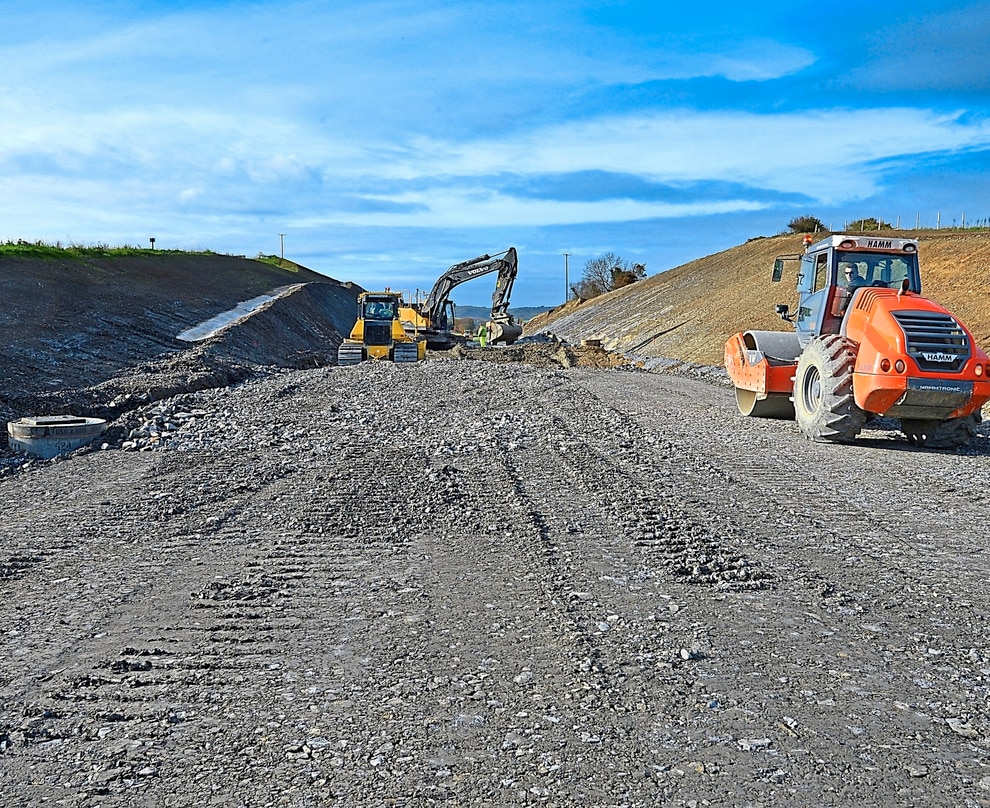 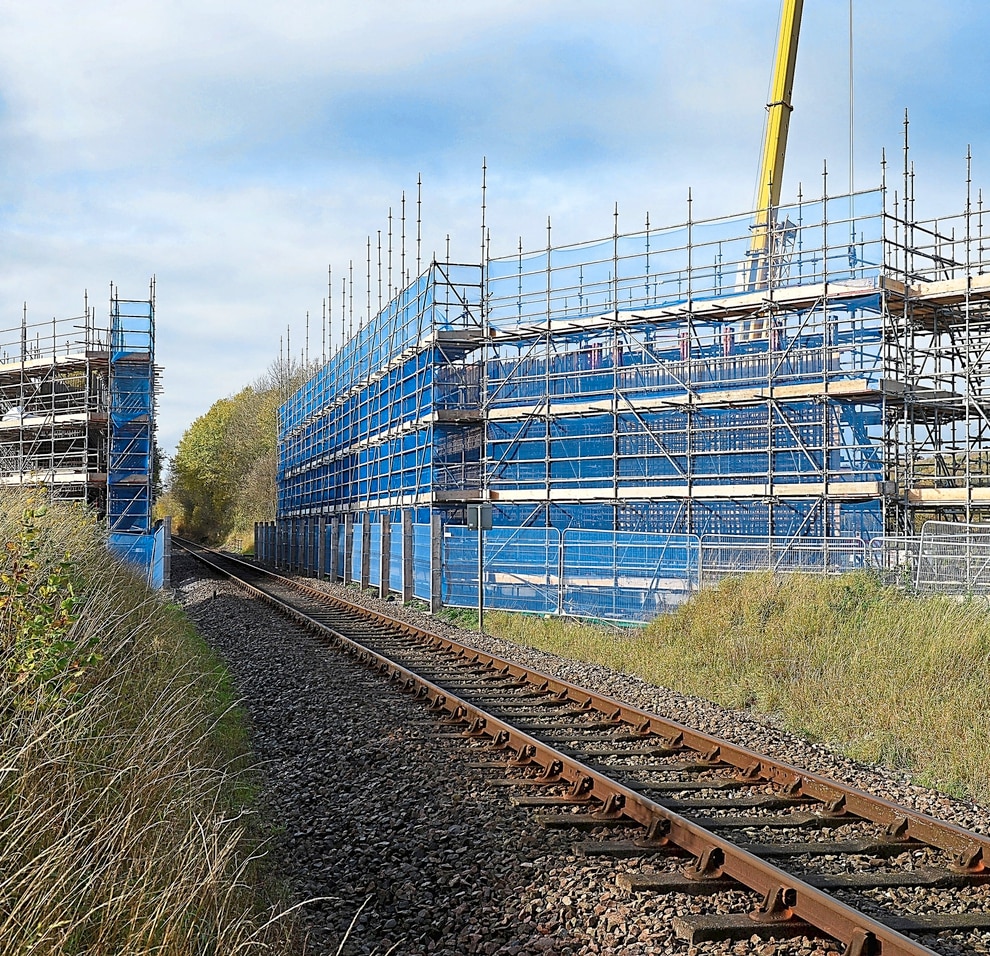 The topography of the area has presented its own challenges. Aerial pictures courtesy of the Welsh Government and Dragon UAV. 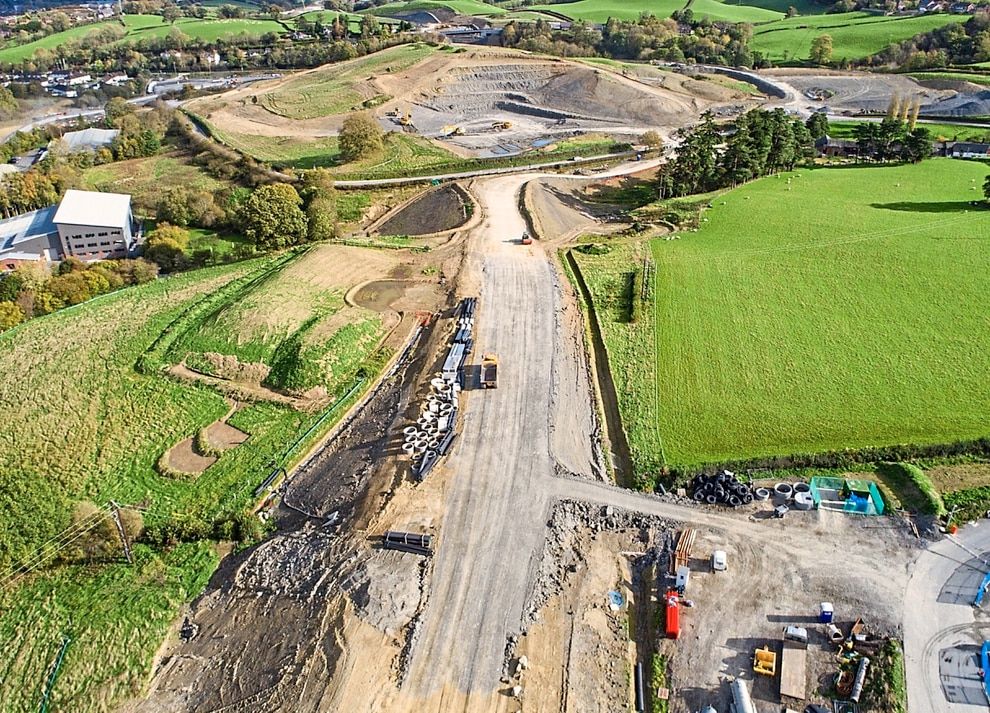 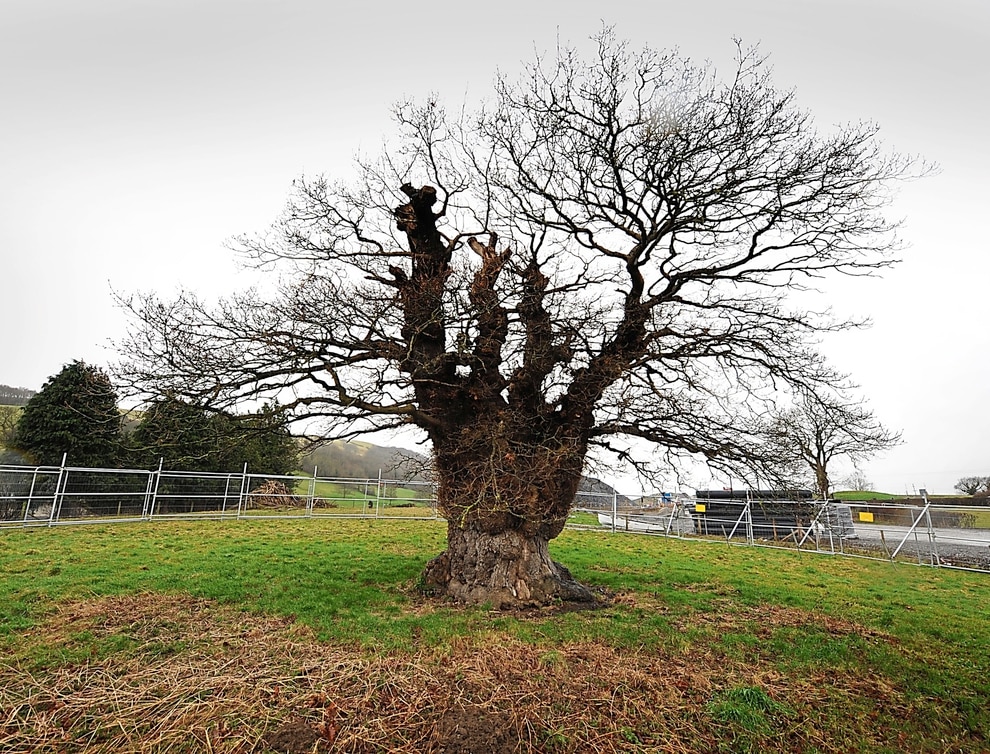 The route of the Newtown Bypass

Thousands of cars pass through Powys’s largest town every day on one of the main routes from north Wales to south Wales.

Congestion has been a word on almost everyone’s lips in Newtown for decades and calls for a bypass have long been ringing around the Montgomeryshire area.

Two years ago that dream became a reality when the green light was given to a bypass to finally be built at a cost of £60 million.

A year-and-a-half later and commuters and residents are starting to see glimpses of the uncongested road they will soon be driving along.

More than 50 per cent of the work has now been completed by Alun Griffiths contractors, who won the bypass contract following a three-week public inquiry back in June 2015.

The scene along the route now, which the Shropshire Star was taken along on Monday, is a far cry from the scene back in 2006, when the streets were gridlocked and the Welsh Government first started looking at the possibility of a bypass.

Project manager Nick Cleary said a lot of work has already taken place, but there is much more work left to do before the first car takes a drive down the new roadway.

He said: “I am happy with where we are, and we are on time for the contract completion date in the with his the spring of 2019.

“However if we can meet targets then it could be done by the end of 2018.

“It is as we were expecting, but there is a long way to go yet.

“Certain things need to be done at certain times for other things to take place.

“We’ve got one-and-a-half winters left to go and some things are weather dependent, such as the wind and putting up structures.”

The battle for a bypass in Newtown has been one that has rumbled on for decades.

Montgomeryshire MP Glyn Davies and Assembly Member Russell George, and the politicians that came before them were pushing for this monumental development to take place.

Work first starting taking place around 2006, with the Welsh Government looking at ways to alleviate traffic problems in Newtown.

However, at that time the word bypass was not mentioned as a concrete option. But in 2009 plans started to be drawn up and various routes were put before a three-week public inquiry. The scene now looks completely different to that of 18 months ago, with Glandulas Bridge on the south of the route complete and the Upper Dolfor Road bridge built and in use.

The biggest structure of the route, the bridge at Dolfor road, which is 94 metres in total span is midway through completion.

It is one of 11 structures that need to be built, including seven bridges. Four underpasses are to be built, two of which are completed and the route also includes 14 tunnels for wildlife to pass under the road.

The construction is the biggest one Alun Griffiths’ has ever taken on themselves, and Mr Cleary said there have been challenges along the way.

He said: “It is the biggest one we have done in our own name, others have been as a joint venture with others.

“The challenges have been trying to basically build a bypass on the site of a glacier valley, the topography has been difficult to do.” The challenges for the Welsh Government have not been easy either.

Due to a campaign and petition to save the 600-year-old Brimmon Oak Tree, the bypass route had to be slightly altered.

Also homeowner Robert Roberts, who lives in Pool Road at the north end of the bypass route was in dispute with the Government over the offer they made to him for his home. However, the benefits are set to outweigh anything else when the bypass is completed.

Traffic congestion will be greatly reduced but there are other positives that have already benefited Newtown and the Powys area. Of the 250 workers on the ground at the peak of the construction project, 72 per cent are from Wales and 32 per cent of the workers are from Newtown and the Powys area. Other numbers regarding the work are equally impressive. In total, two-and-a-half million tonnes of earth is being dug up and moved around as part of the construction – enough to fill the Principality Stadium in Cardiff.

Following the work, the contractors have a five-year after-care plan to look after the areas surrounding the bypass.

About 80,000 plants are being put in place to screen the bypass so that the impact on the surrounding scenery is minimal. Assembly Member Russell George was at the site on Monday, and was delighted with the progress made. He believes it is important for the public to see just how much progress has currently been made, and the benefit it will bring to the Powys area.

He said: “I am just very pleased that the bypass is on schedule, and with some good weather it could be finished ahead of time. It is great to see that some of the bridges are already built and the big structure up Dolfor Road is coming on well.”

Mr George added: “By coming up here and being shown around it will help to show the public just exactly what is being done, because there is a lot of public interest in the bypass and that is what people want to see.

“A massive bonus is the 32 per cent of workers coming from the local areas, that is huge and it is great to see.”

The contractors are now hoping for a dry winter so more work can take place. Parts of the bypass construction are already visible from the current roads in and out of the town. And in the coming months people will be able to see more of the development that will shape the future of Newtown and Powys for decades to come.