The installation of Jackfield's famous railway gates took place today after all – after initially being postponed Thursday by poor weather forecasts. 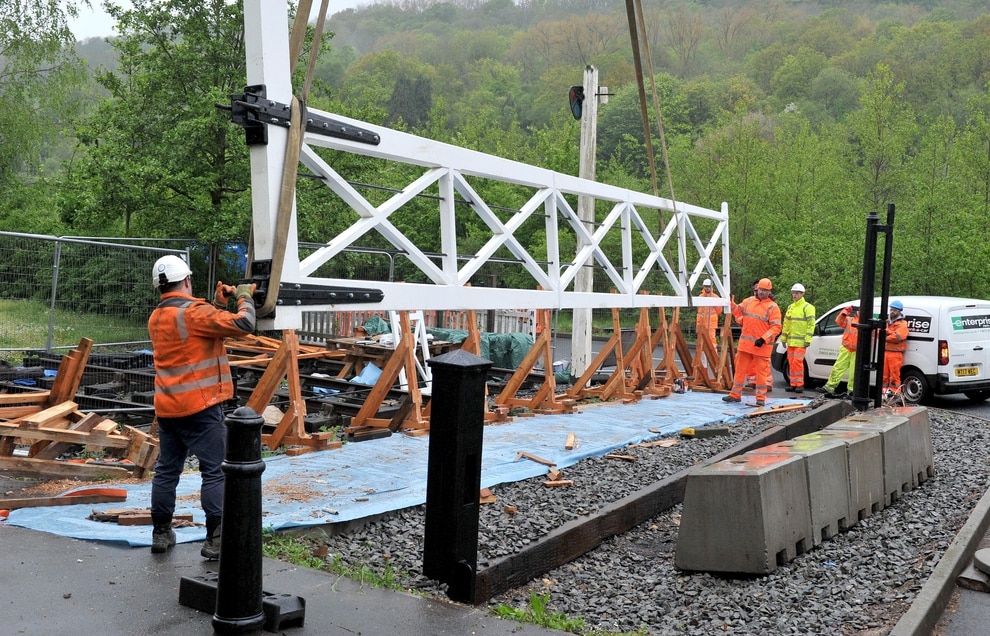 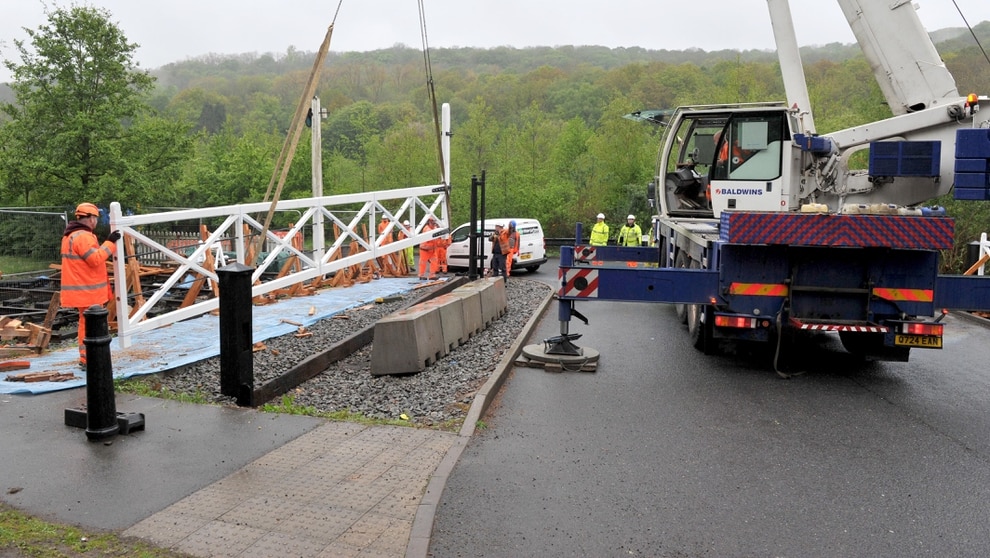 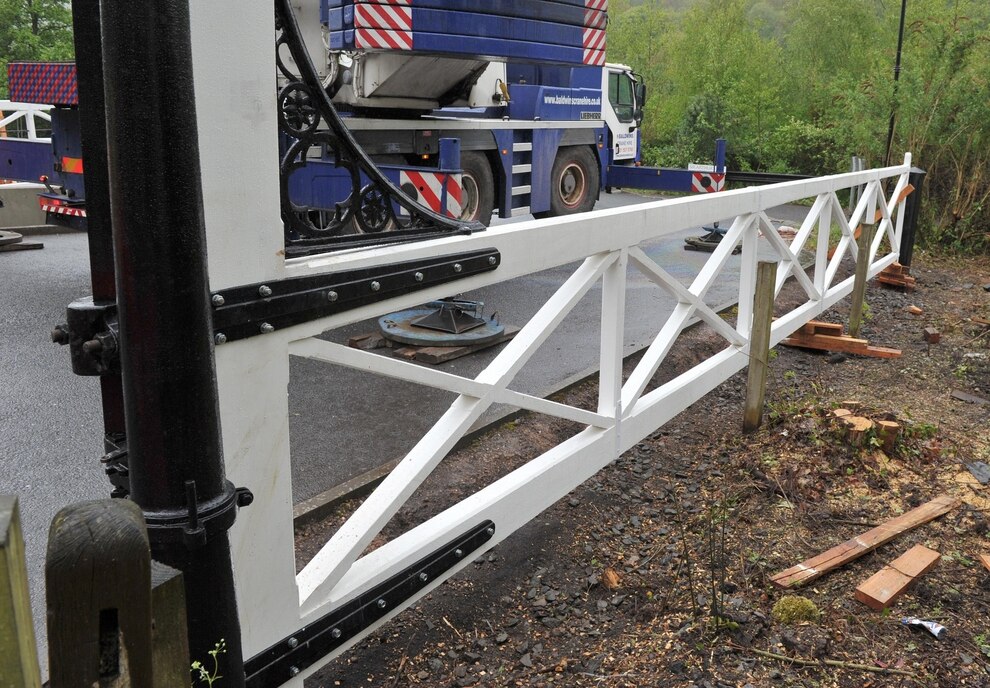 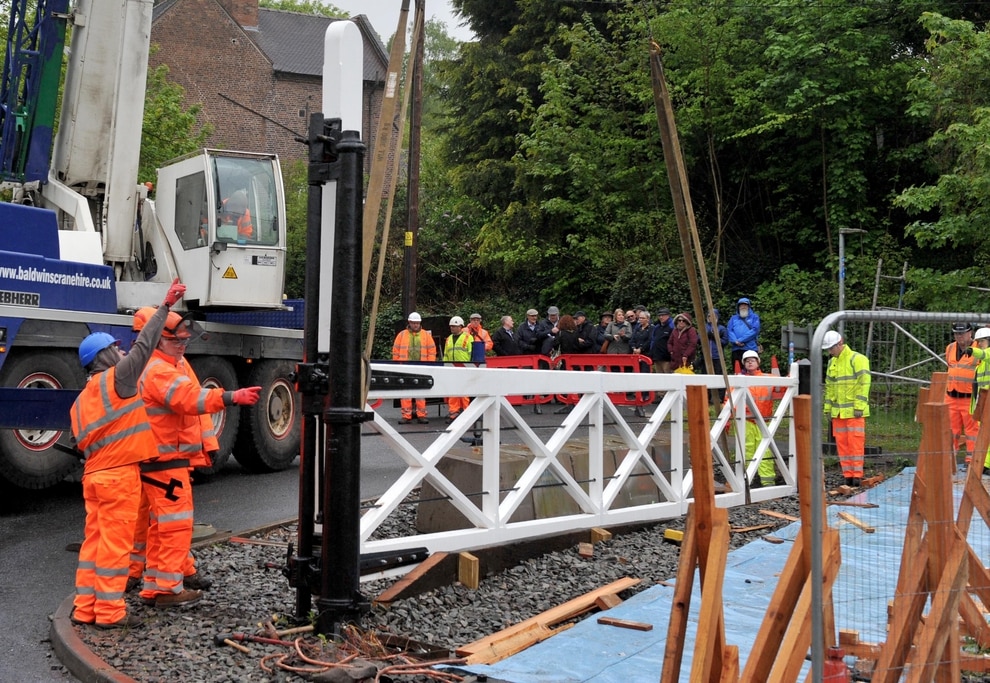 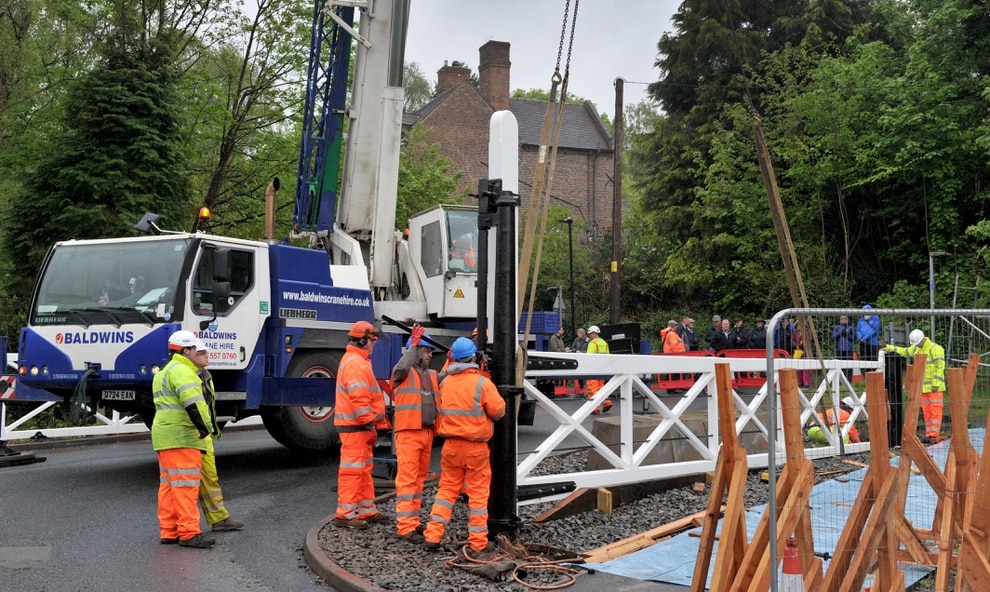 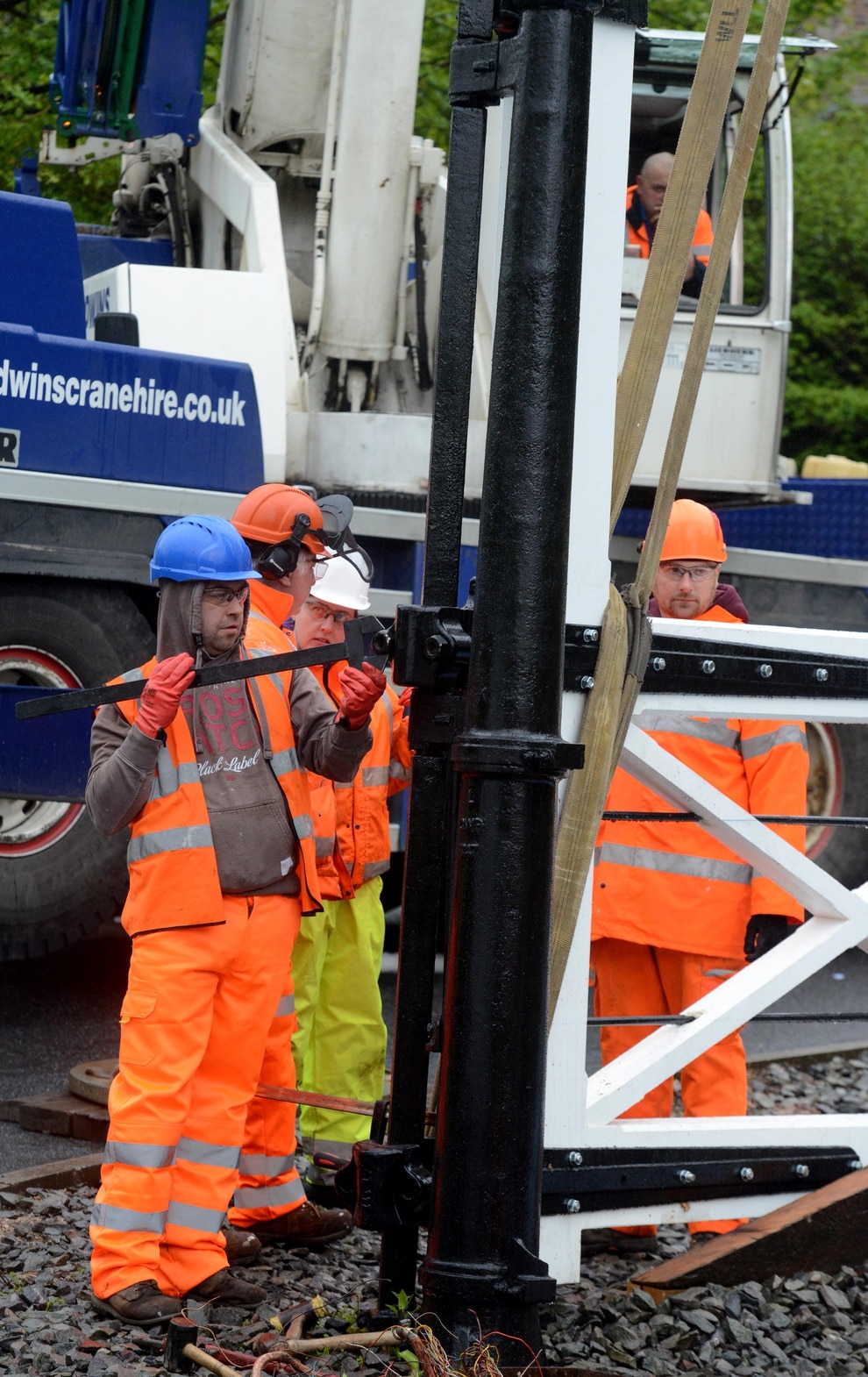 A small crowd gathered to watch the operation The gates are installed 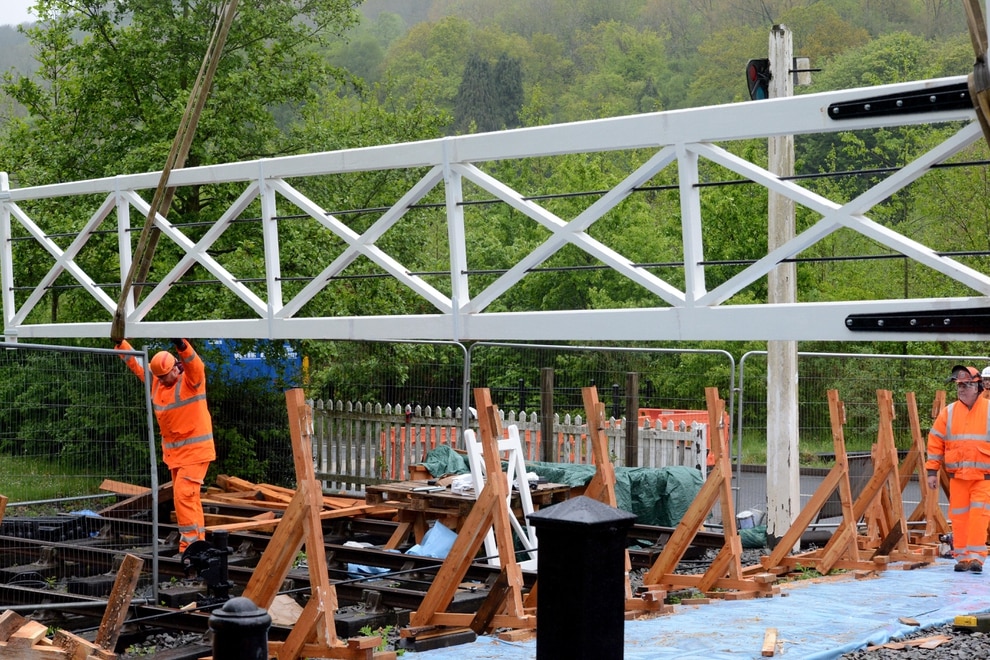 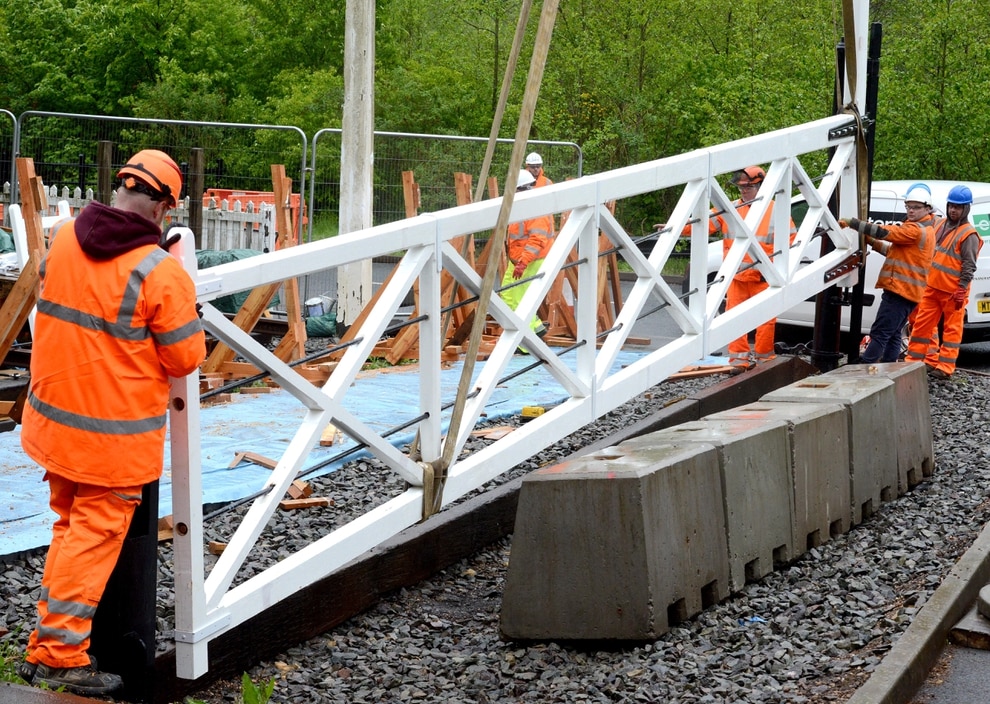 It means the most famous gates in Telford & Wrekin are finally back in place after more than a year of tireless work from volunteers and contractors to get them ready.

The council initially announced that the installation would have to be put back a day because of poor weather, but it turned out the process could go ahead today, about an hour and a half behind schedule.

The Jackfield railway gates near Ironbridge will be lifted into place by crane soon and a crowd has gathered to watch. pic.twitter.com/OuckS8Y6Vg

The project to replace the old railway gates at Jackfield, near Ironbridge, started in April last year when the old set was removed, and culminated today when a brand new pair of railway gates was lifted into place by crane.

Each of the new 38ft gates was crafted from scratch after it was found the existing structures were in too poor a condition to be restored.

The Small Woods Association has been working with Telford & Wrekin Council to create the replicas ever since the old gates were taken down, and they were able to use the original metalwork that was extracted from the gates.

One side is up now and Ironbridge Gorge parish councillor Tony Hobson says he’s delighted with how they look. pic.twitter.com/lK7Faz0bsp

Now they’re lifting the other side. https://t.co/mySHVnlKwJ

Residents gathered to watch the historic gates be lifted back into place.

The other half of the gates looks to be in place now. Teresa Green who owns the nearby Black Swan pub said she has missed the gates which she said are part of Jackfield’s history. pic.twitter.com/lTYYY0NB9L

One of the proudest people watching the new gates settle in was Tony Hobson of Coalport, a gorge resident of more than 30 years and a long-standing member of the Gorge Parish Council.

He has been an advocate for the gates for years, and used to collect pieces of wood that had fallen off of the old gates and show them to fellow councillors as proof that something should be done.

"I lived over the road there, I used to come past and see the gates in a terrible state," he said.

"I just asked if we could do something about it as they are unique and they're worth keeping.

"It snowballed from there really, I kept asking about them every council meeting.

"The biggest thing was finding out who owned them and had responsibility for them.

"Telford & Wrekin did take responsibility and it went from there.

"I think they're fantastic, and it's really great to see them back there."

The Lloyds Head road was closed for the work to go ahead, and the council allowed for another closure tomorrow, although the work is likely to be finished today.

Teresa Green has owned and operated the Black Swan pub, a stone's throw from the gates, for 17 years.

She said: "I have missed them, it has been strange walking down and not seeing them there.

"It will be good to show that part of the history off again. They are part of Jackfield.

"We will be quiet at the pub today with the road closed because people pass by, but it's just for one day."

The original gates date back to 1862, and were installed as part of the Severn Valley Railway which ran from Shrewsbury to Hartlebury. In their heyday, they would have been opened and closed several times a day.

Although the railway itself has been disused since the 1970s, the gates remained a popular landmark. It is believed the last time they were removed and repaired was in the 1980s.

She said that it was a shame the original gates couldn't be repaired, but that the new gates were built to last and would help residents celebrate the history of Jackfield for "a long time to come".

Nikki Heath, assistant project engineer at Telford & Wrekin Council, oversaw the lifting in of the gates and thanked the volunteers at the Small Woods Association for their hard work over the past year.

She also said that recreating the peculiarities of the original gates based on historical photos had been a challenge, but said the new gates would serve as a lasting landmark for Jackfield and the Ironbridge Gorge.