Meet the paranormal specialist who debunked the region's biggest mystery

He is the author of four books, a historian, a costume demonstrator and has helped debunk some of the biggest paranormal mysteries of the last three centuries.

Andrew Homer, from Sedgley, has more than a tale or two about the ghostly goings on of the Black Country and beyond.

The 62-year-old – who is the resident chemist at the Black Country Living Museum – was part of the team that helped solve the mystery of the Wem Town Hall ghost – a case which gained huge national attention during the 1990s.

Photographer Tony O’Rahilly was said to have stood across from the Shropshire building as it burnt down in 1995 and captured the now infamous picture – showing a little girl standing amongst the blaze.

It was believed for a long time that Mr O’Rahilly had captured the ghost of a girl who was pictured on Wem High Street on a postcard from 1922.

But together with ASSAP, a paranormal education and research charity, and Parasearch, a paranormal investigation unit Andrew joined in the 1980s, he worked with Steve Potter who found the photo to be a copy in 2007.

O’Rahilly had, according to Parasearch, tampered with the image to make the girl appear as though she was in the burning building.

It is something Andrew is proud to have been a part of, and the clues, he says, were on his wall all along.

“The picture was not debunked until long after Tony had died in 2005.” he said.

“It was actually a colleague of mine that did it and it could only be debunked using computer software that is available now that you would not have been able to do at the time – for many, many years we did not know.

“It was faked, he did fake it, but I actually liked the guy, I met him a couple of times.

“When Wem Town Hall burnt down it was a major blow for Wem, it is only a tiny place anyway, and I think that he thought by trying to generate some publicity for Wem it would just help Wem out – I think that was his motivation.

“He appeared not to want money for the negative, and there was only ever one negative of this thing and he gave me it."

He continued: “Tony also gave me a photograph, he had framed it and everything, it is a nice picture of Wem Town Hall burning down.

“There is no girl standing in the doorway, it is a photograph without the girl and he signed it and he put the date and everything.

“Once I realised what the picture was, I realised after that he might have been giving me a bit of a clue.

“It has got a picture of a camera on it and it says ‘Tony O – photography black and white, sepia and colour – copies of photos’ and his phone number.

“The way that the Wem photograph had been done, it is a copy, it is a sandwich copy, and he has got this sticker on the back of this thing saying he is doing copies of photographs, so he had got the skills to do it.

“He had never admitted to faking it right up until the end.”

Investigating and writing about the paranormal was something that started for Andrew back in 1984 following an incident he experienced at Dudley College.

The author was working there as a teacher in special education needs and computing when he saw a figure in a dark suit holding a briefcase early one morning.

He watched the man in the dark suit walk into a room which had two double doors with only one way in and one way out.

At the time the college had been subject to a coffee thief – and Andrew thought he had caught the perpetrator red handed. He waited to give the man the chance to get the kettle on, and after a few moments, burst into the room. The room was empty.

It is something that has inspired him to carry on with his work to this very day. After spending years investigating with local paranormal units, Andrew has turned his hand to pen and paper. His latest book – Black Country Ghosts and Hauntings – is a gazetteer of the region’s paranormal and is available on Amazon. 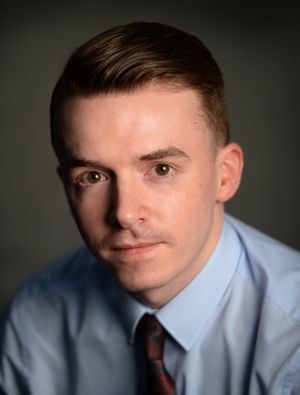 Trainee Express & Star reporter covering Dudley and Sandwell. Get in touch on 01902 319445 or via luke.bartlett@expressandstar.co.uk.

Man who caused distress to traders banned from shops in Oswestry

Telford duck with crossbow bolt in its head is 'safe and well', public assured

Peter Rhodes on stuck sofas, a double-edged diagnosis and a manifesto pledge to win over Terry and June

Star comment: A government on its last legs is not an easy one to lead

Man who caused distress to traders banned from shops in Oswestry

Telford duck with crossbow bolt in its head is 'safe and well', public assured

UK only major economy to contract in 2023, warns IMF

Pets at Home boosted by demand over festive period

Starbucks serves up some experience for Telford students

Winter freeze cancels 1,500 flights and leads to death in Texas