A light aircraft smashed into a hedge and was sent careering across a road when its elderly pilot was caught off guard by a sudden change of wind direction, an investigation has found. 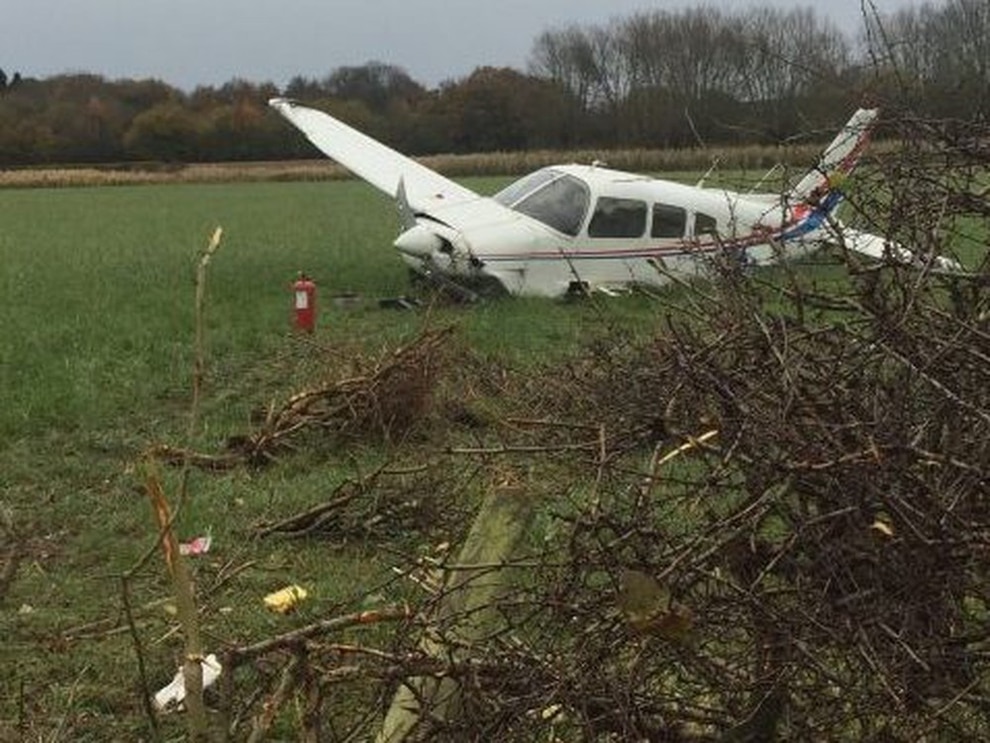 A wing was torn from the plane 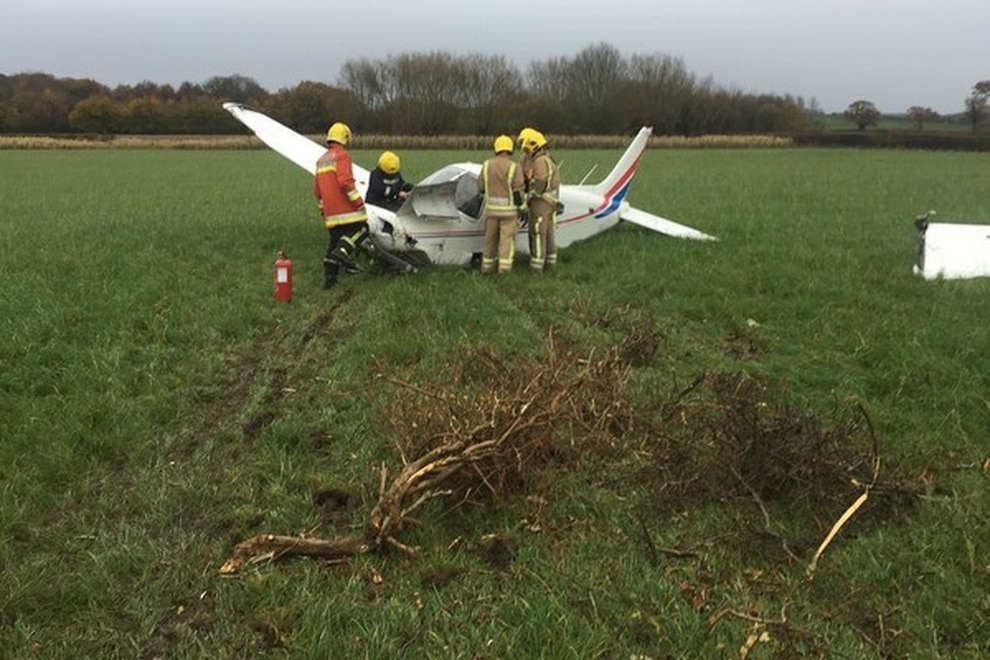 Fire crews made the wreckage safe The plane careered through a hedge Both men escaped with minor injuries

The plane was coming in to land at Halfpenny Green Airport, near the Shropshire border with South Staffordshire, when a vicious tailwind resulted in it touching down more than halfway along the runway - meaning the 73-year-old pilot was unable to stop in time.

He made a last-ditch attempt to abort the landing but after getting off the ground the plane's wing dipped, causing it to strike a boundary hedge, before crossing a road and coming to a rest in a field.

A wing was torn from the plane on impact but both the pilot and an elderly passenger escaped the dramatic crash with only minor injuries.

An investigation into the crash on November 16 last year revealed weather conditions worsened after the Cherokee Warrior II plane took off from Halfpenny Green, with the pilot, who had more than 900 hours of flying experience, forced to contend with low cloud and rain, resulting in reduced visibility.

When he eventually did touch down, the wet runway made it more difficult to slow down.

A flight information service officer (FISO) who had been communicating with the aircraft on approach activated the crash alarm when the plane was still 100m from the end of the runway as he knew an accident was imminent, the report from the Air Accident Investigation Branch (AAIB) said.

He then watched in horror as the plane smashed through a hedge and disappeared from his view. Both men managed to clamber out of the wreckage before firefighters arrived and were treated for minor head injuries. Ambulance service chiefs said both men 'got away remarkably unscathed'.

The AAIB said weather reports earlier in the day had warned of changes in wind directions and gusts of more than 25mph. It said pilots are reminded to 'consider the meteorological situation before commencing a flight'.

The report said that around 20 minutes after taking off, the pilot radioed in to say he was returning to land.

The FISO told investigators he had warned him there was a tailwind, but the pilot said he could not recall being told about it.

The pilot also ignored advice from his passenger, a former flight instructor, to go around as he believed he had enough runway to successfully make the landing, the report said.

"According to the pilot, the aircraft seemed reluctant to descend while on final approach, but he did not remember hearing the FISO inform him of a tailwind. He stated that the visibility had reduced because of rain, but he appreciated that he was still airborne when more than halfway along Runway 16," the report said.

"His passenger, a former flight instructor, twice suggested that he went around but the pilot continued because he still believed he had sufficient runway available to complete a landing.

"After touching down, the pilot encountered difficulty decelerating due to the wet surface and the tailwind so, when he realised the end of the runway was approaching, he increased power and attempted to go around.

"Once airborne, he was aware of the left wing dipping, probably because he had not applied sufficient right rudder to counteract the increased engine torque, and the left wingtip then struck a hedge at the airfield boundary.

"This caused the aircraft to lose height as it crossed a public road and before impacting a second hedge with a co-located fence, on the south side of the road. As a result of the second collision the left wing detached, and the aircraft spun around and stopped abruptly a few metres into a grass field."

What the papers say – January 25