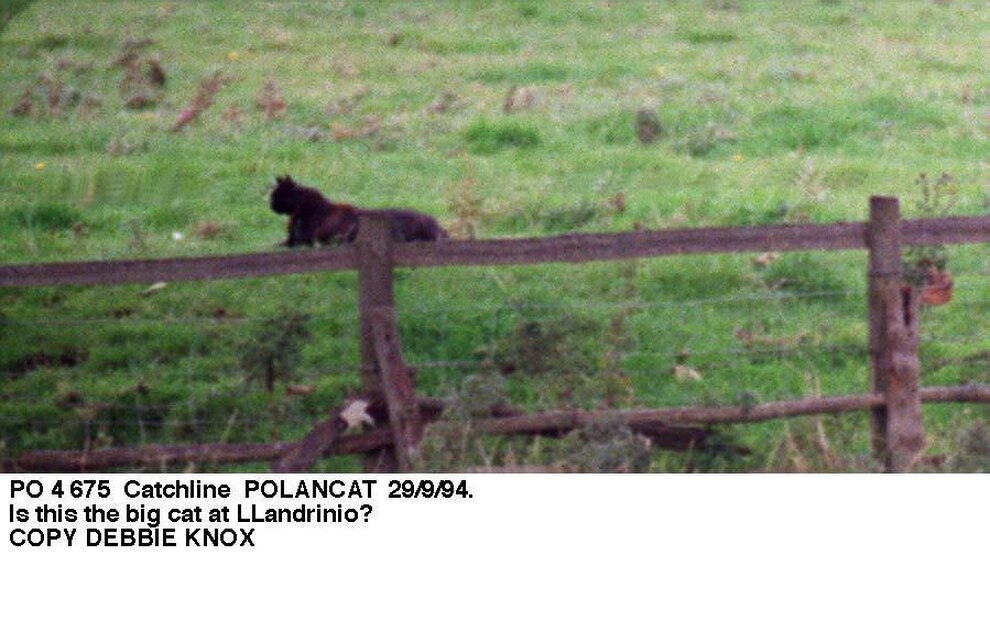 This cat, the so-called Beast of Llandrinio, was captured on camera on the Shropshire-Mid Wales border by Star photographer Andy Compton in 1994. 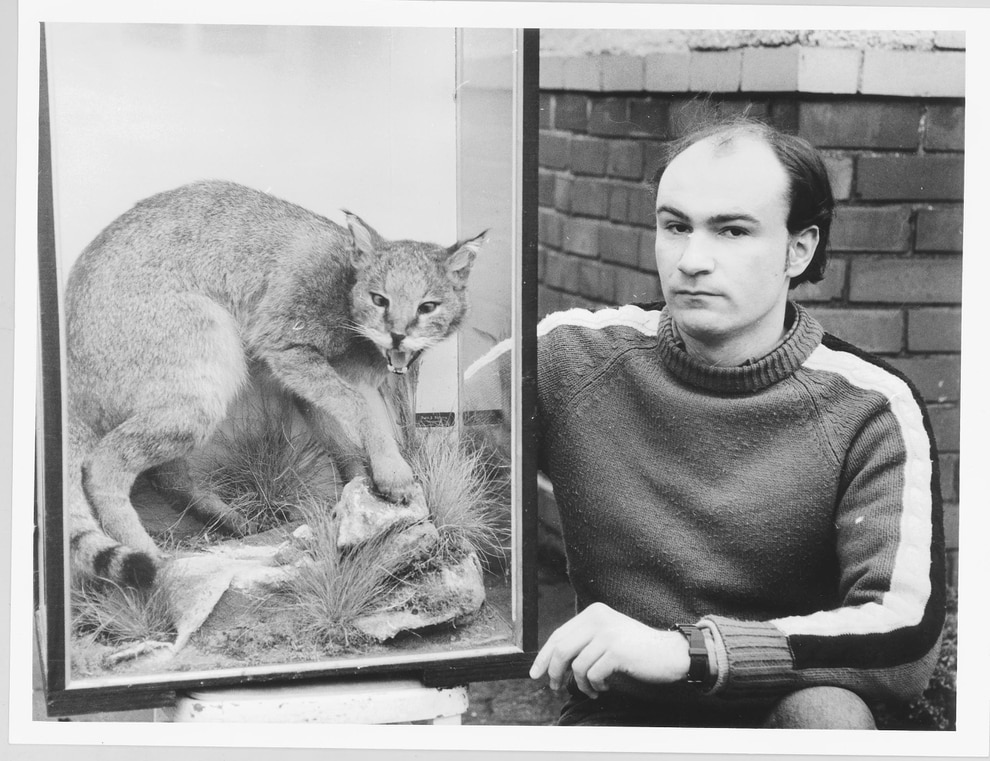 Dr Karl Shuker in 1993 with the Asian jungle cat which was found dead near Ludlow. 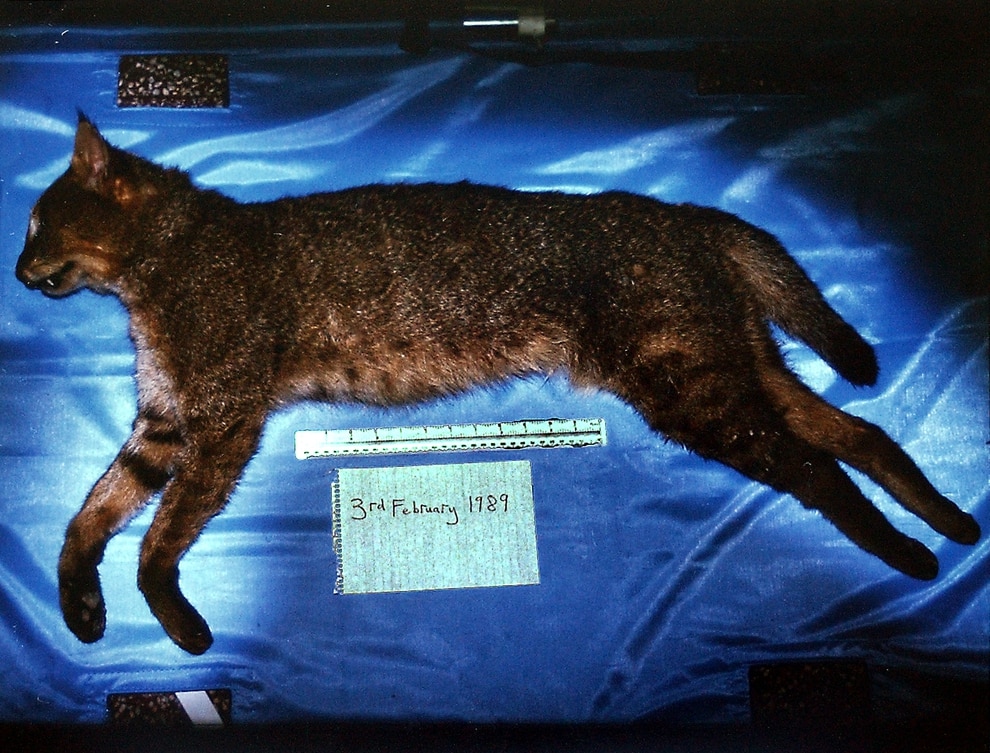 After its discovery the cat was photographed by Ludlow vet and wildlife photographer Gareth Thomas.

They are on the prowl in the Shropshire countryside, and they are elusive – if they exist in the first place.

Over the years, there have been a host of sightings of big cats in and around Shropshire, and occasional video footage or fuzzy images caught on security cameras, although quite often it's difficult to assess whether they are jungle panthers or well-fed domestic pussycats enjoying a night out.

The possibility of there being big cats out there has long captured the public's imagination, and there have been stories about them across the country.

Some have gained special notoriety, like the so-called Beast of Exmoor which was blamed for scores of deaths of sheep in Devon in the 1980s.

But why does nobody ever find them?

In actual fact, they sometimes do, and a key date in the big cats mystery is February 3, 1989, when the body of an Asian jungle cat was found dead at Richards Castle, near Ludlow, by a Mr Evans.

It was taken to Ludlow Museum to be identified, examined, measured, and photographed by local vet Gareth Thomas. Thin, suggesting it had been unable to feed, it was thought that the jungle cat was probably an escapee from some private collection which had been injured by a car.

Subsequent events gave rise to the possibility that it had spawned a sort of super breed of monster moggies in the Ludlow area by crossbreeding with domestic cats, although as genetic testing to prove it one way or the other would have been prohibitively expensive, it was never resolved.

Not long after the jungle cat was found Mr Thomas was conducting his normal surgery when a woman came in with her kittens, George and Jasper, and he was startled to see that they looked very similar to the jungle cat, and Jasper in particular was much larger than other kittens of his age.

A further piece of the jigsaw was that the woman had bought the kittens from a farm in Leintwardine, close to where the jungle cat had first been sighted in the mid-1980s.

Mr Thomas believed that the kittens' mother – a grey feral domestic cat with lynx-like features which was never fully tamed and was called simply Mother – was the daughter of the jungle cat.

Jasper in any event was not going to spread any wildcat genes having been "done" on that original visit to the vet, and George was later run over, having fatally inherited his alleged grandfather's road sense.

The Ludlow jungle cat was stuffed and mounted in a display case, and was subsequently bought by Dr Karl Shuker, a zoologist and expert in cryptozoology – the scientific investigation of mystery animals whose existence or identity has yet to be formally ascertained.

Dr Shuker, who lives near West Bromwich, said: "At the time of the Ludlow jungle cat's discovery by the person on whose estate it turned up dead, I was completing my book Mystery Cats of the World.

"This was published in 1989 and remains the standard work on the subject, so I was naturally very interested to hear of this specimen, which the person who found it had taken to a taxidermist and had prepared as a mounted specimen contained in a glass display case.

"After contacting the relevant authorities to ensure that it was legal for me to do so, which they confirmed it was, I subsequently purchased the encased jungle cat from its original owner/finder.

"Although I do still own it, it is presently in storage in an undisclosed location some distance away from where I live for safekeeping.

"As the jungle cat species, Felis chaus, is not native to Britain or anywhere else in Europe for that matter, the Ludlow specimen was clearly either an escapee or a deliberate release from captivity, though its origin has never been determined, and judging from the severe back injury that it possessed when found dead, it had probably been hit by a motor vehicle."