Healthy doesn’t mean boring. That’s the slogan of recently-opened flexitarian Shrewsbury bistro Eat At Eight. The team behind it have moved into premises formerly occupied by a restaurant that was a little too worthy for its own good and closed after Shrewsbury shrugged its shoulders and let out a great, big yawn. 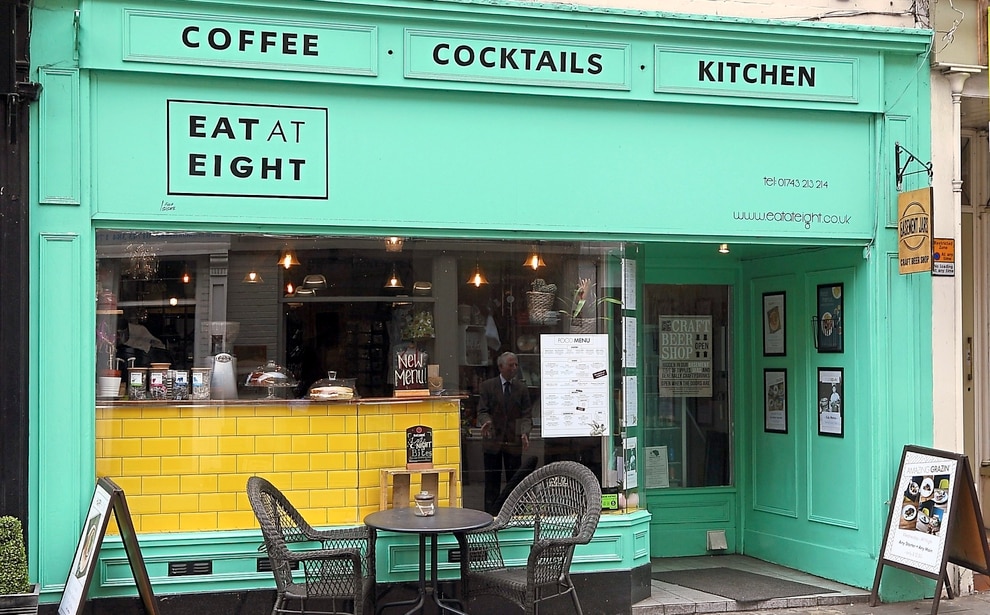 The staff are great. A team of twentysomething waitresses provide service with a smile 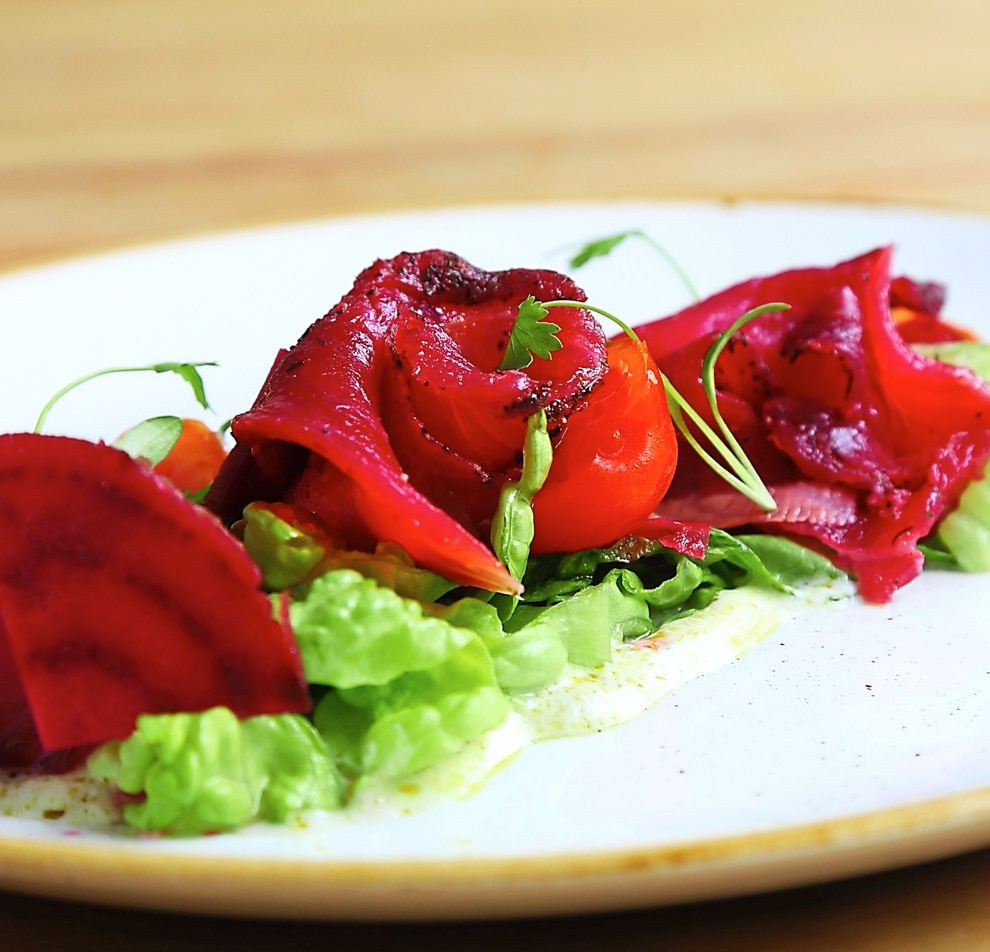 Beetroot salmon was an accomplished dish 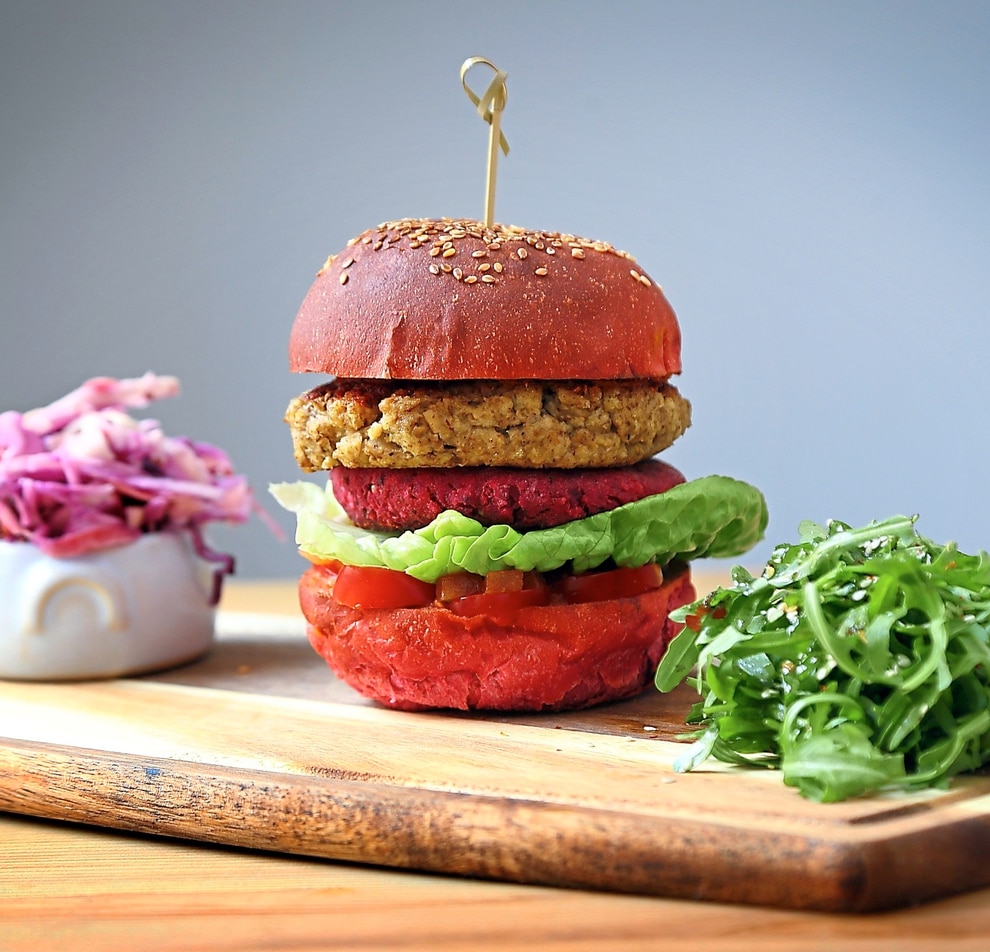 A burger with the beetroot treatment

The new owners are putting healthy, compassionate and flavoursome food first, leaving no dietary stone unturned in catering for nut, gluten and dairy-free customers as well as vegetarians and vegans.

But while the crowd who previously ran a holier-than-thou outlet at the same premises seemed to try too hard, making healthy eating seem almost like a religion, Eat At Eight is a different kettle of alfalfa sprouts altogether. Relaxed and easy going, taking the food seriously not but itself, Eat At Eight is informal and composed.

The staff are great. A team of twentysomething waitresses provide service with a smile, interacting with customers of all ages and being charming without any trace of worthiness or faux sincerity.

Their shoulders are relaxed, their demeanour carefree. There’s professionalism without the polish, a willingness to put the customers first and make sure people are having a good time.

The dining space is light and airy. Tables are scrubbed down and unstarched, with small tealight candles providing the simplest of adornments. And there’s a constant buzz of noise, as guests chatter, smoothie-makers blend vegetables and juice and there’s the unmistakeable sound of people having a good time.

My partner and I visited for an impromptu and unplanned Saturday lunch. We were welcomed by a friendly waitress who invited us to choose our own seats. At the back we sat, able to observe proceedings from a safe distance.

I started with a so-healthy-it-hurt blend of mango and raspberry juice while she selected a pomegranate, elderflower and prosecco number. Plink, plink, fizz. Delish. Service is unhurried and our food was delivered in its own good time.

The food choices were good. Eat at Eight is big on flavour while still providing the healthiest eating choices in town. So needless starch and an abundance of fried stuff is missing from the menu as the chef focuses on beautifully seasoned protein served with seasonal, peak condition vegetables.

A pear and chorizo bowl combining manchego with walnut dressing, cherry tomatoes and rocket sounded delicious as, indeed, did a chilli duck dish with kale, red pepper and cucumber yoghurt.

But I opted for mushroom fritters with a thyme and plum salsa and grape yoghurt. They were wonderful. The fritters looked like small discs of card and tasted like a damp cellar, which is exactly as they should have done. Warm and fungal – in the best possible sense – they were complimented by a fragrant, sharp, lightly acidulated dressing that was herby and full of flavour. The grape yoghurt was the perfect compliment.

My partner enjoyed a similarly accomplished dish: beetroot salmon with herb yoghurt, cherry tomato, pickled beetroot and gem lettuce. The salmon was deliciously intense, with the beetroot cure adding sweet, earthy elements to its natural flavours. The salad added a taste of late spring and her plate was clean as quick as you can say: ‘That’s delicious, and good for me too’.

As our plates were cleared and the waitress asked whether we’d enjoyed them, we found ourselves exchanging meaningful glances that read: ‘We didn’t expect that, that’s exceeded expectation’.

Our mains were just as enjoyable. She ate a beetroot burger which was, frankly, ridiculous. A piled-high piece of purpley-pink contained quinoa and beetroot. It was topped with a mushroom fritter and dressed with lettuce, tomato, thyme and plum salsa and served in a toasted beetroot bun.

We were almost expecting Joe Wicks to pop out from behind the counter and award her a gold medal in healthy schizzle.

I ate a similarly healthy plate of protein and vegetables. A deliciously tender breast of chicken – it had the suppleness of meat that had been steamed, rather than fried or roasted – was covered in jerk spices and served with a sliced of deliciously hot/sweet chilli pineapple. The garnish was a raft of steamed broccoli, which, frankly, was delicious.

We were all in on the dessert menu. What’s not to like about a citrus tart served with blueberry coulis and a ginger biscuit or a bowl of apple and cherry crumble with granola and vanilla custard?

Sadly, however, we’d eaten our fill. We polished off our fizzy/healthy drinks and while we realised there wasn’t a chance of the proverbial fat lady singing – not in a place that thinks chips are small offcuts of wood – it was time to pay up and exit.

Eat at Eight is nothing if not impressive. It’s retained the healthy, wellness ethos of the people who formerly operated from the premises but it’s lost all of the unappealing, preacher nonsense. Casual and relaxed, open and warm, friendly and inviting, it lets people choose for themselves and doesn’t turn up its nose if guests want a decent piece of meat, rather than an entirely plant-based diet.

The staff are its ace in the pack. They deliver warmth and friendliness at no extra charge, making people feel decidedly welcome.

The restaurant still has courses that are titled ‘Spring Into Wellness’. But there’s no sense of yoghurt-knitting, meat-hating, militancy.

Rather more, Eat at Eight gives people an alternative to Shrewsbury’s glut of mid-range bistros that purport to offer something different while really offering much of a muchness.

In an age where plant-based diets are becoming increasingly fashionable and increasingly necessary as the planet continues to warm, Eat At Eight offers tasty, ethical food that’s big on flavour while refusing to guilt-trip customers if they fancy a beautifully cooked piece of steak served with a fried egg and sauté potatoes.

It’s a recipe for success and Eat At Eight scores more marks than its title might suggest.