Young guns aiming to build on grasstrack success in 2020

Podiums, a Dutch adventure, a course of antibiotics and lots of help from their fathers. 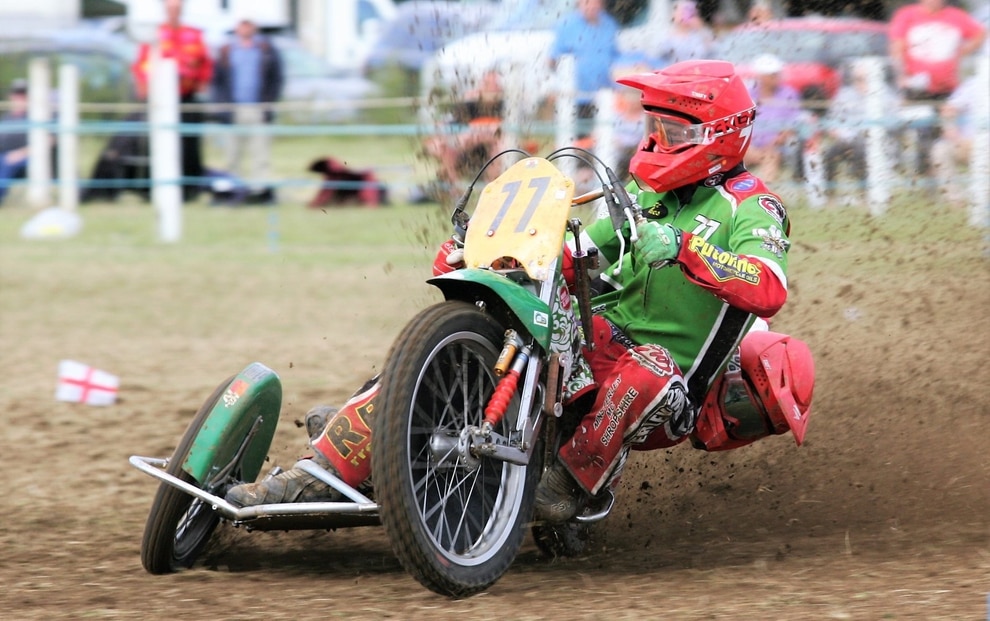 Hughes, driver, and Bennett will be back for more grasstrack action at home and abroad in 2020 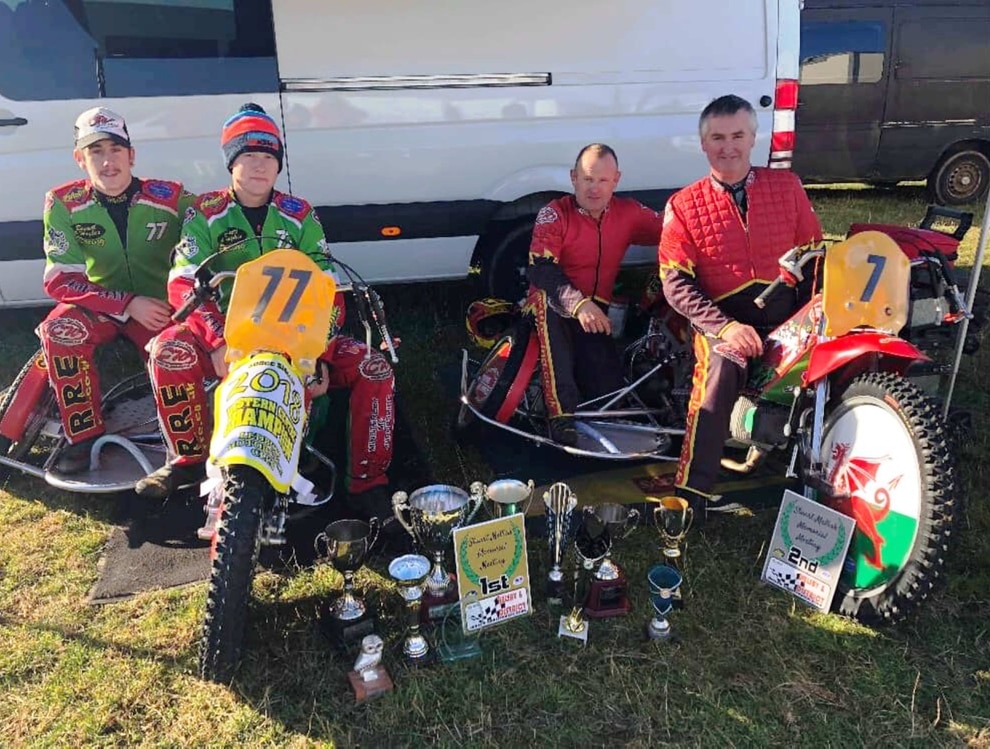 Louis Bennett and Shaun Hughes have been supported all year by their fathers, Barrie and Eifion 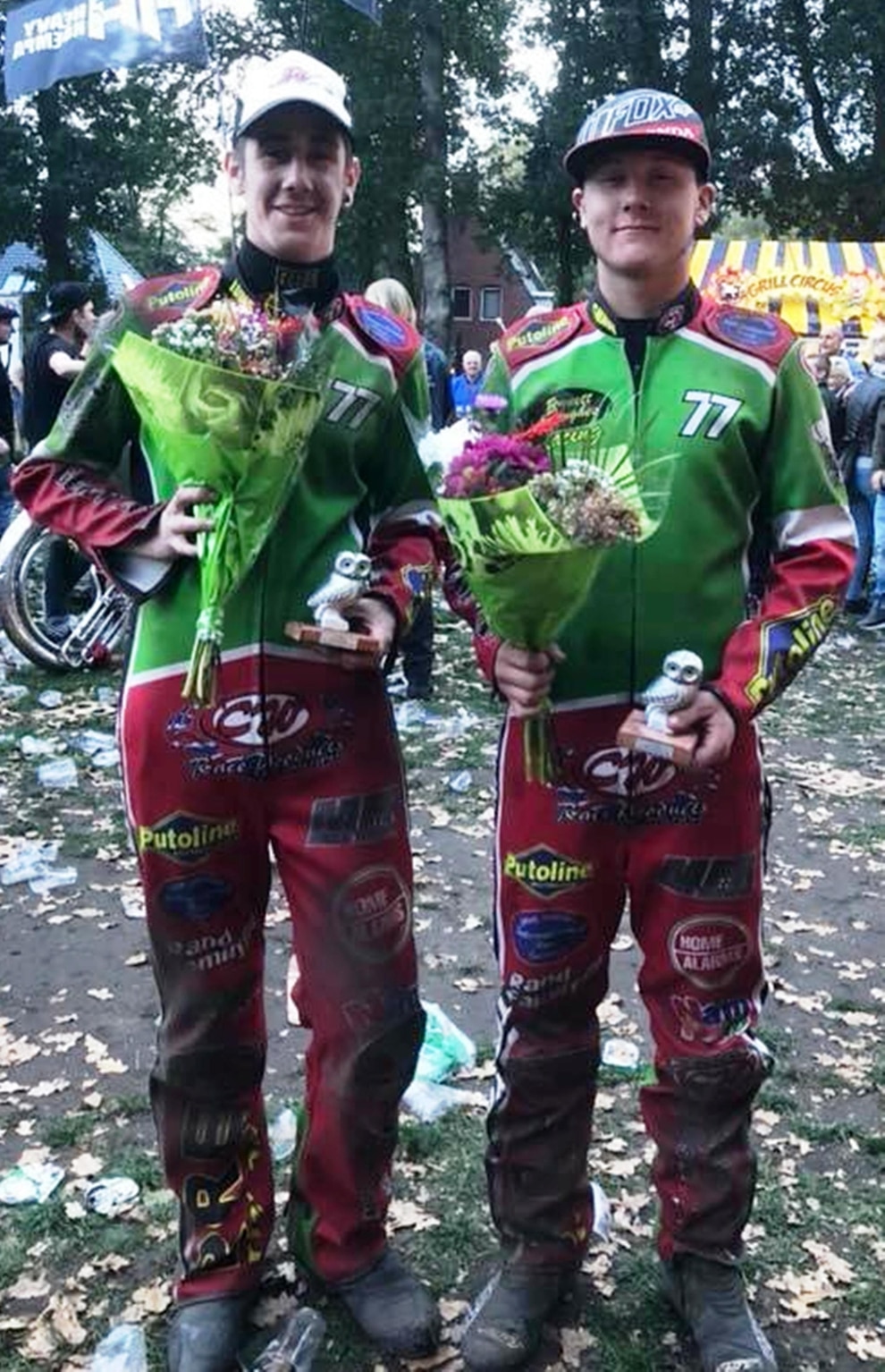 Louis, left, and Shaun picked up more silverware during their 2019 campaign

It's fair to say the 2019 grasstrack campaign has been another rollercoaster for young guns Louis Bennett and Shaun Hughes, who once again left their mark on the season.

More medals on the continent and a few wins at home ensured the Team Bennett Hughes Racing name remained at the top of the grasstrack standings for another generation.

Louis, 21, who was born in Shrewsbury, lives in Telford and was brought up in Newtown, and Shaun, 19, from Powys, who also grew up in Newtown, have been supported once more by their fathers, Barrie Bennett and Eifion Hughes.

The senior figures enjoyed plenty of grasstrack success themselves before hanging up their kevlars last year and have now turned their attention to supporting their sons.

Louis now races as passenger and Shaun as the driver, a reserve of how their fathers competed, but the pairing are already turning heads and looking forward to a busy 2020.

"We've really enjoyed this year," said Louis. "We had high expectations and a lot of people were looking at us to carry on our growth and our ability.

"This year our dads have been a major piece to our puzzle. They retired last year to try and push us on that little bit to get us to really glow.

"Their help spinning spanners has been absolutely unreal, they never missed a beat and anything that went wrong was picked up on and fixed before it became a real issue.

"They also took on a shed-load of driving and offered the best advice we could ask for, everything they said helped and made us think differently and improved our racing brains.

"We've rarely been off the podium this year, which I really think shows our pedigree. We've travelled far and wide to race against some of the world’s best."

Lady luck has not always been on the side of Team Bennetts Hughes Racing, such is the nature of the motorsport, but still the young guns have managed to come away with some stunning results.

"We did a meeting in Dorset and the bike just didn’t want to move off the line at all – races can be made and lost at the start line," said Louis.

"We managed to chase a few people down going from sixth to second in a couple of laps, which made a lot of people pay attention.

"Another meeting in Lincolnshire, we felt fast in practice, on a 1,000m track, which was big as standard tracks are 400m at a push.

"At the start of the first heat another crew broke the tapes, which then attached itself to Shaun’s neck. I didn’t really pay attention but it ripped his neck raw.

"We picked up three thirds but in the fourth heat it was too much for him to bear.

"I've known him since we we're kids and for him to show any sign of pain is serious.

"A week of antibiotics cleared up the infection that had made itself at home in the wound."

Holland beckoned the following weekend after the pair were invited to race by MC Annen.

Practice brought despair as the gearbox had shredded teeth on the driving gears but just as they were about to pack up Dutch crew Klaas Kregel and Emiel Bruins lent them their second outfit.

"We learned a lot about how people’s bikes are set up differently and had to adapt to how we wanted it to handle," said Louis.

"Again we took second step in Holland. We love going to Annen, it’s a great club and it has a real family feel with a great set up to go with it."

Last meeting of the season was in Kent and both were keen to their campaign on a real high.

"We had two firsts and going into the third leg we wanted to try the outside line," added Louis.

"When we spoke about it in the pits our dads said just don’t get caught out in the loose, which is a build-up of mud that ends up getting deep if it’s not removed.

"We were miles ahead of the rest of the field – and we got caught out. The sidecar wheel dug in and the bike flipped the bike upside-down with us on it.

"It hurt and we had to have a few minutes with medical staff but we dusted ourselves down and managed second in the final.

"Consistency was what we strove for and we managed to get the fourth-highest point scores on the day behind three of the favourites.

"It means next year we should be Great Britain’s first choice for the European semi-final, which is rumoured to be held in Germany.

"We know we have stuff to prove and learn, we want to be upfront with the front runners in the UK and on the continent.

"The only way we're going to drastically improve is through riding against the world’s best but we also need to remember where we cut our teeth and balance it with the UK.

"The continent is a beautiful place with snooker-table smooth tracks and big crowds but it come at a cost.

"Basically, we have a full-time hobby on top of work, which means long hours to stand on the top step.

"The one thing we're pleading out for is sponsorship. With the miles we travel and the media coverage, we can expose companies to a much wider audience."

It’s been a year full of challenges for Jess Pugh