Will Enefer’s rise through the ranks held up, but he’s got the desire

This is the year Will Enefer should have been kicking on with his golf career.

Despite the coronavirus pandemic severely disrupting the sport in 2020, the Telford golfer ended the year by challenging the leaders in the early stages of just his second European Tour event.

Since then, though, his clubs have spent more time in the bag than out – as Covid continues to affect people’s lives and livelihoods, including those in professional sport.

“I’ve never played and practised so little than in the last few months,” 23-year-old Enefer reflected when catching up with the Shropshire Star.

Instead of spending the winter preparing to tackle some of the best courses around Europe, he was hitting golf balls into a net at his dad’s factory to keep himself ticking over.

It has been a stark contrast to shooting five under par to sit in a tie for third on the opening day of the Aphrodite Hills Cyprus Open in October.

“I was ready to use that experience and came back into another lockdown,” said Enefer. “I went from playing on the European Tour to hitting balls into a net.

“The last few months have been difficult. Trying to get better has been very difficult in the last year.”

As has been the case with his career, the backing of his dad Neil has been vital – though neither father or son perhaps would have thought his Retail Furniture factory in Halesfield would have been required as a makeshift driving range.

But there is only so much that can help and, qualifying as an elite athlete, Enefer decided to up sticks and decamp to Spain so he could at least return to the course and make sure he is fully prepared for when events do start again.

He drove the 1,500 miles to Desert Springs in a van, arriving at the end of January to play just his second round since that European Tour event. He plans to stay on until the end of the month, but may look to extend that if the UK’s Covid restrictions are likely to remain in place for a while longer yet.

That preparation could be vital, with Enefer still towards the bottom end of the professional spectrum on the Euro Pro Tour – the third tier of golf on the continent.

There are fewer opportunities to make money anyway, and when that tour was cancelled last year, gone was the opportunity of gaining promotion to the Challenge Tour by finishing in the top five of the Euro Pro’s Order of Merit.

“It just feels like a year lost of my career that I had no control over,” said the former Thomas Telford School student. “It’s not like I’ve been or injured or played poorly, I’ve just not had a chance to move forward.”

Still, there was one silver lining – his first invites on to the European Tour, playing the Portugal Masters in September and then the Cyprus Open in October.

He may have missed the cut on both occasions, even after his superb opening round in Cyprus, but it hammered home to Enefer that it was where he wanted to be.

“It didn’t feel like a huge step up except in the way you get looked after and the circus around it is a bit more glamorous,” he said. “The golf course is the same.

“It gave me confidence that’s definitely what I want to do and where I want to be.”

Now heading into his fifth year as a professional, Enefer is keen to make up for lost time – by either earning his full-time Challenge Tour card through the Euro Pro Order of Merit this year, or by bypassing that all together for European Tour when Qualifying School comes around later in the year.

“I have always had the desire – I can never remember a time where I didn’t think I was going to be a golfer,” he said, having played for England since he was 15 and turned professional at the age of 19. “I didn’t go to sixth form because at the age of 16 I was playing golf all the time.

“The journey to get there is so different to so many people. It’s really hard in golf to get a barometer of where you are at because people’s lives can change so quickly – one good year and you can have your tour card, one bad year and you’re off the tour.

“What’s holding me back is wanting it too much sometimes. There’s been weeks where if I play my game I can get those changes, but I know how much I want it.”

n Anyone interested in sponsoring Enefer can email his management company at graham@ism.golf 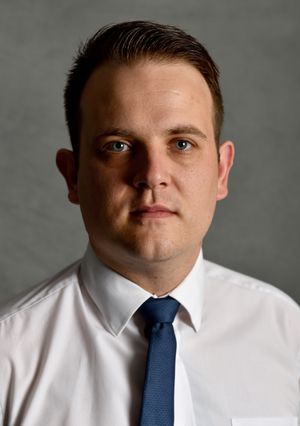 Deputy sports editor for the Express & Star and Shropshire Star.

Peter Rhodes on censoring comedians, the truth about foreign holidays and something “definately” dodgy in Line of Duty

Dalian Atkinson ‘confused and agitated’ before being Tasered, court told

'Every child should have a chance to flourish': Parents 'disgusted' as art and music GCSEs shunned by school

List votes up for Greens across Scotland, Harvie claims

US stand on waiving virus vaccine patents is no ‘magic bullet’, says EU