Wolves are heading to Germany for the Europa League quarter-finals after they held off a massive barrage to beat Olympiacos at Molineux. 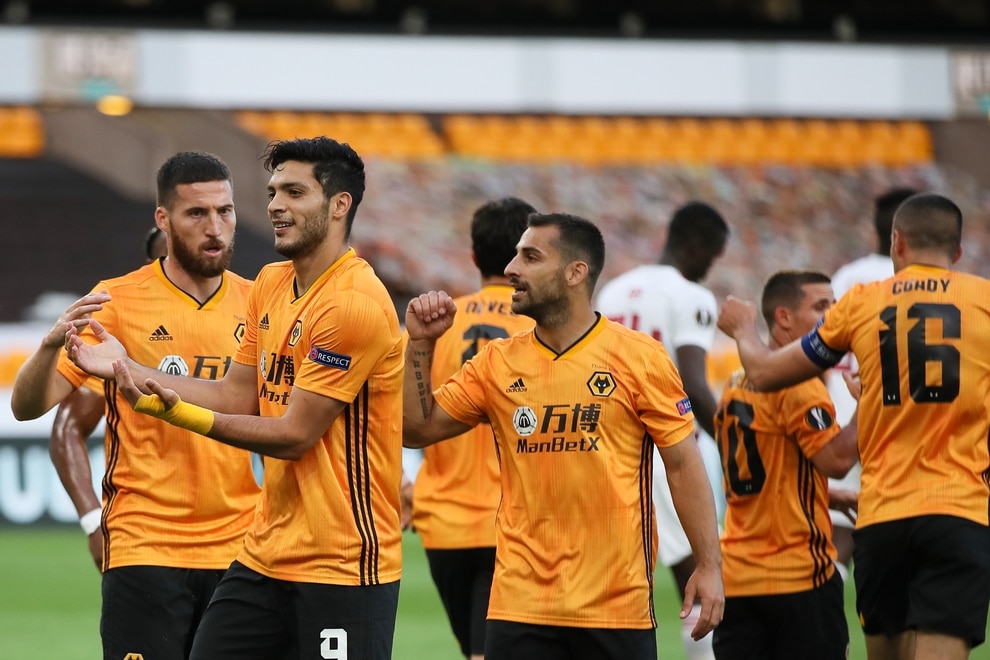 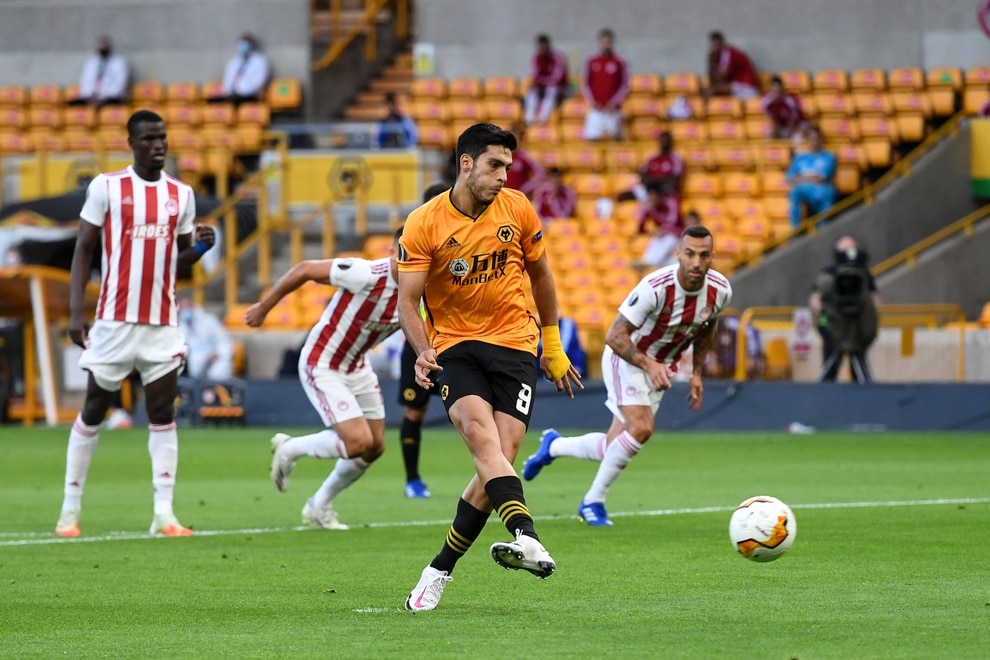 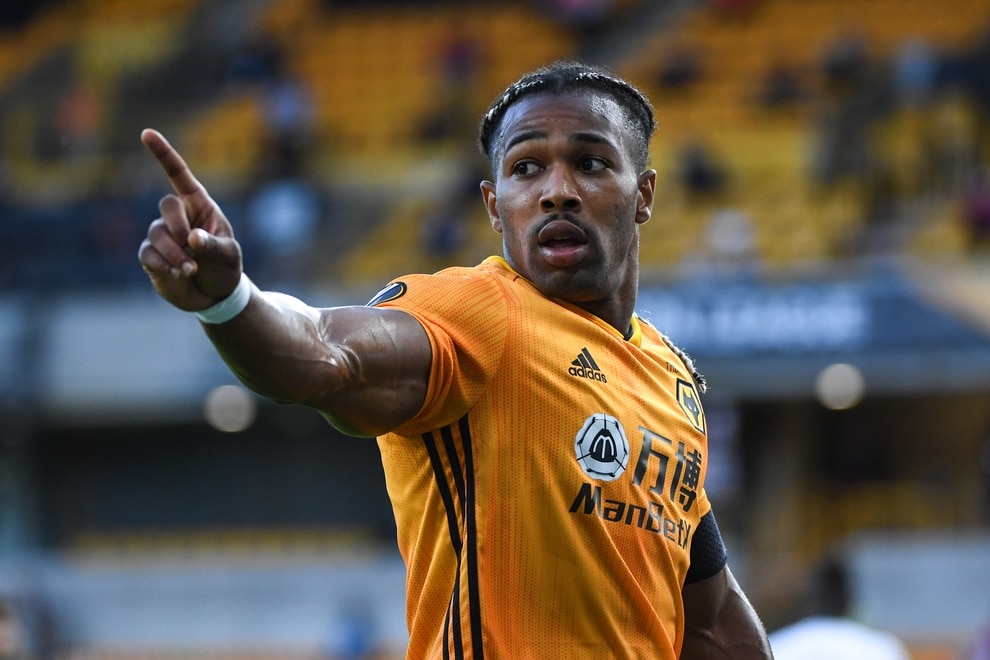 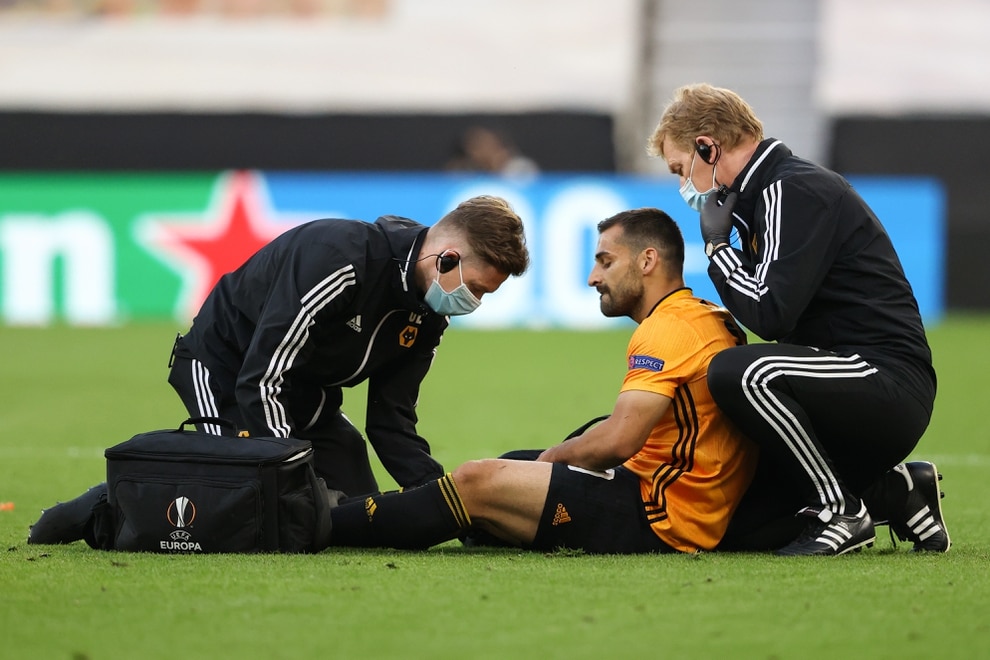 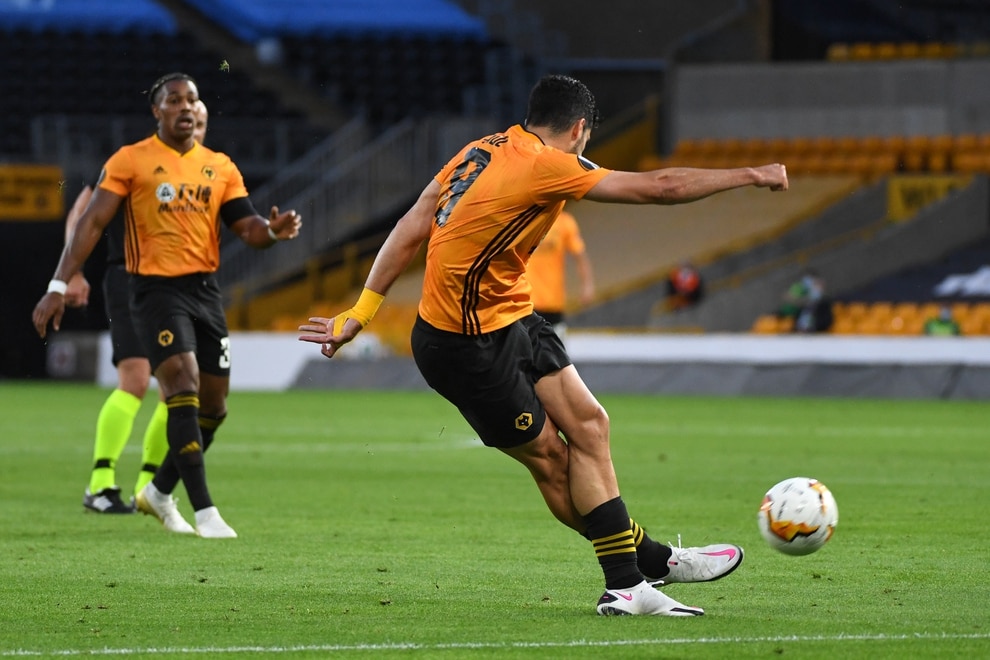 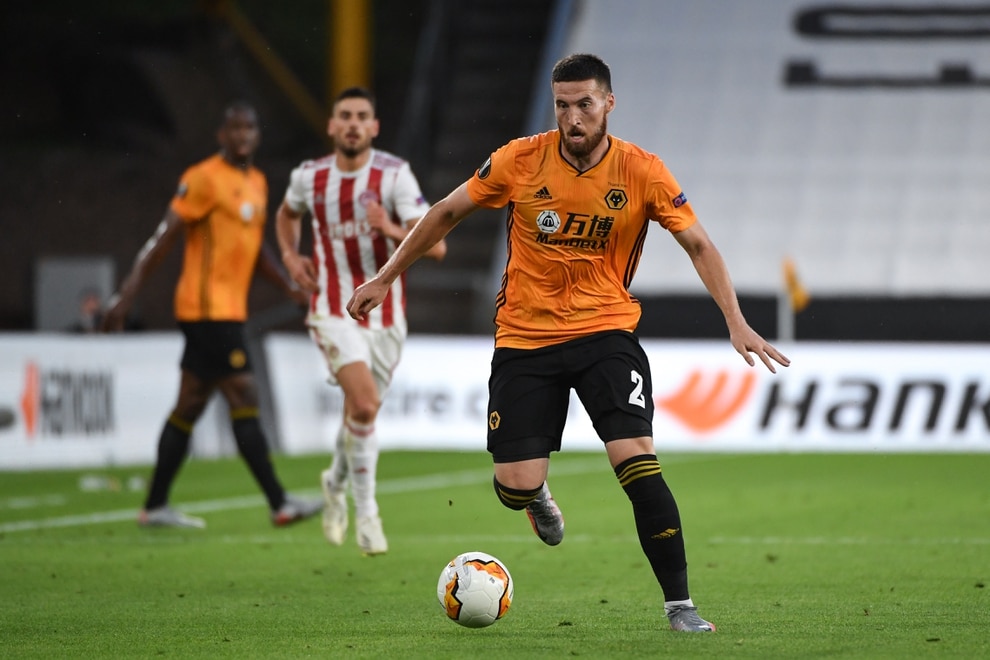 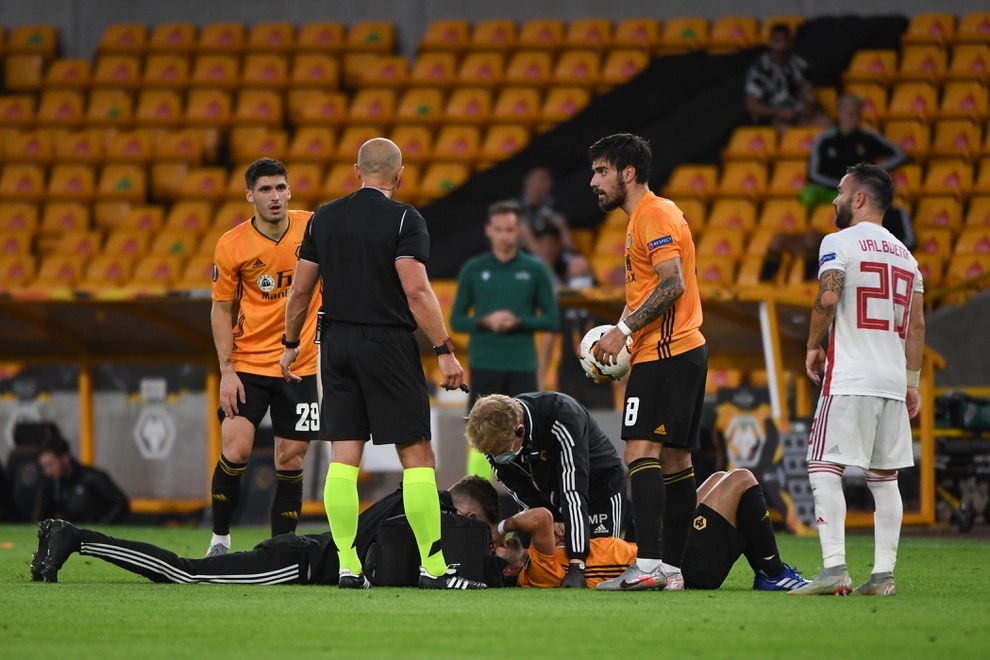 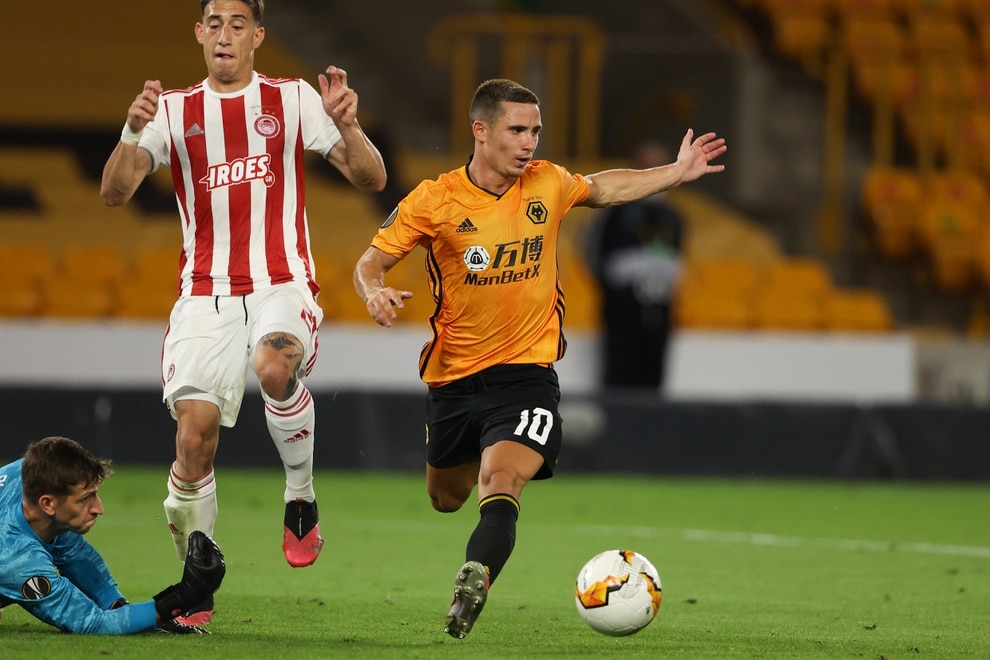 Raul Jimenez scored an early penalty to win 1-0 on the night, and 2-1 on aggregate in this last-16 encounter.

But it was far from plain sailing as the away side threw everything they had at Wolves - Mady Camara's goal disallowed for a fractional offside before they dominated in the second half.

Ultimately, though, the journey which began more than a year ago continues.

It would not really be Wolves if they did it the easy way, would it?

This was as nervous as it gets. The last half an hour was nausea-inducing. And the relief, as well as elation, at the final whistle was palpable.

Credit must go to Olympiacos. They will feel so hard done by after leaving everything they had on the Molineux turf.

Their effort could not be faulted - but they were thwarted by a heroic display from Wolves' superb goalkeeper Rui Patricio.

The Portuguese, who has a statue dedicated to him back in his homeland, could be on course for another here if Wolves end up going all the way in this competition, after making two mind-blowing saves.

He was the difference, and Wolves are going to Germany. Just let that sink in.

Wolves made three changes to the side which lost 2-0 at Chelsea on the final day of the Premier League season.

Daniel Podence, Adama Traore and Joao Moutinho were the ones to come in, in a side that seemed set up to attack the Greek visitors from the off.

Diogo Jota - after a recent dip in form - was on the 12-man bench despite scoring hat-tricks in each of his previous two Europa appearances at Molineux.

Olympiacos lined up as expected, with the relatively untested Bobby Allain between the sticks because of Jose Sa's wrist injury.

The onus was on putting pressure on Allain in the early stages. Wolves did just that, and he crumbled.

From the first whistle, Nuno's charges were pressing high and forcing mistakes from the very nervy visitors. And the stand-in keeper shot himself in the foot in the seventh minute, taking a hefty touch following a backpass and barging Podence over for a stonewall spot-kick.

Top scorer Jimenez, as you would have predicted, coolly did the rest, sending the Frenchman the wrong way for his 27th goal of the season in all competitions.

It was the sharp start supporters had been crying out for. Hurt by the Stamford Bridge defeat, and Arsenal's FA Cup win to claim the last Europa spot for next season, Wolves were channeling their frustration in the right manner.

There was still plenty of time to go, though, and some twists and turns to endure.

Jonny Castro Otto pulled up and had to go off with an apparent knee injury - punching the drinks box in frustration as Ruben Vinagre took his place. And while the enforced change did not disrupt Wolves' flow entirely, Olympiacos definitely grew in confidence and had joy down Vinagre's side.

The hosts had their moments - a Ruben Neves effort blocked after being teed up by Jimenez, while the Mexican's audacious rabona flew over - but Pedro Martins' charges looked more dangerous.

Kostas Tsimikas went on a marauding run from left-back and forced Patricio into an utterly magnificent save at his near post.

They thought they had levelled, too, when Youssef El-Arabi latched onto a clever through-ball and squared it across goal to Camara, whose strike found the net via Willy Boly.

Fortunately for Wolves - so often on the wrong end of VAR decisions - a lengthy review concluded that El-Arabi's armpit was offside.

Olympiacos, although incensed by that decision, continued to turn the screw. An El-Arabi flick-on narrowly evaded the outstretched leg of Pape Abou Cisse. Ousseynou Ba then maliciously left one in on Moutinho, with all signs emphatically pointing towards a tense second half.

The away side, keen to keep up the momentum, made a couple of changes after the interval. Lazar Randjelovic and Kostas Fortounis helped them stay on the front foot, too.

Olympiacos, and El-Arabi in particular, were soon up in arms again. The Moroccan target man was unable to meet a tempting cross, feeling he was pushed in the back by Boly. Again, to Wolves' relief, the referee saw nothing in it.

Nuno's lot were on the ropes, though, and a change was needed.

Jota replaced the ineffective Traore, and the switch brought some brief respite, with Podence's shot tipped over by Allain while Boly could not get the connection to turn a Jota effort home.

The Greek team then returned to their threatening ways. They brought on Ahmed Hassan to partner El-Arabi, who slipped as he had another go on the swivel and hit the side netting. It was tense, to say the least.

Trying to shore things up, Leander Dendoncker came on for Podence - booked for not taking the quickest route off the pitch and now suspended for the quarter-final.

Jota had a glorious opportunity to ease the anxiety as he latched onto yet another poor Olympiacos pass at the back, but took too much time and Allain was able to gather.

Patricio was the hero, pulling off another outrageous stop to deny Hassan, as Wolves survived an almighty onslaught to extend this amazing European adventure.