Wolves' Europa League quest hangs in the balance after they ended the Premier League campaign with a 2-0 loss at Chelsea. 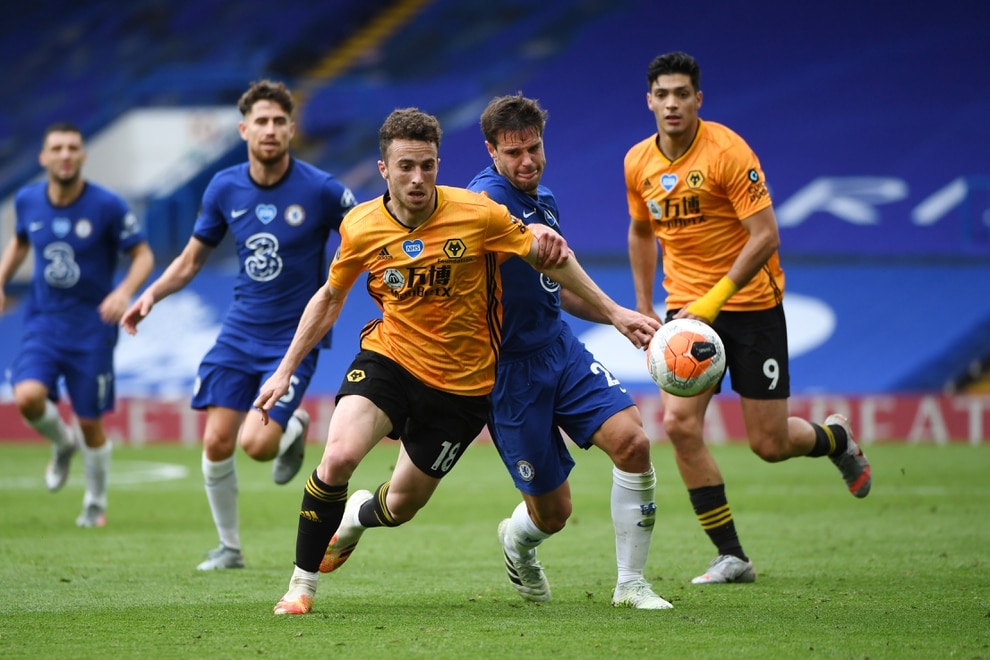 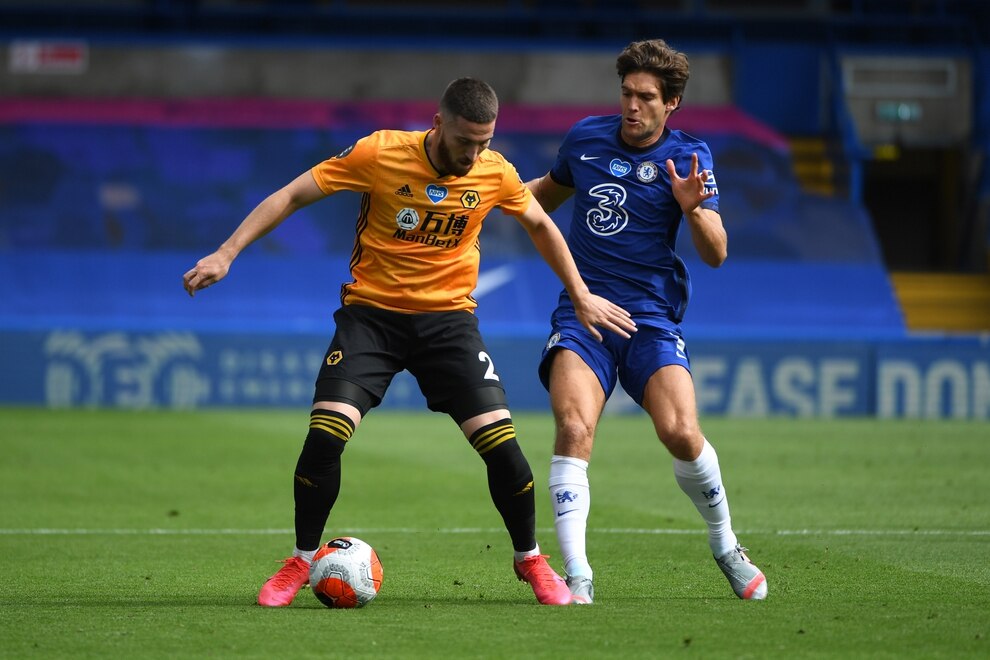 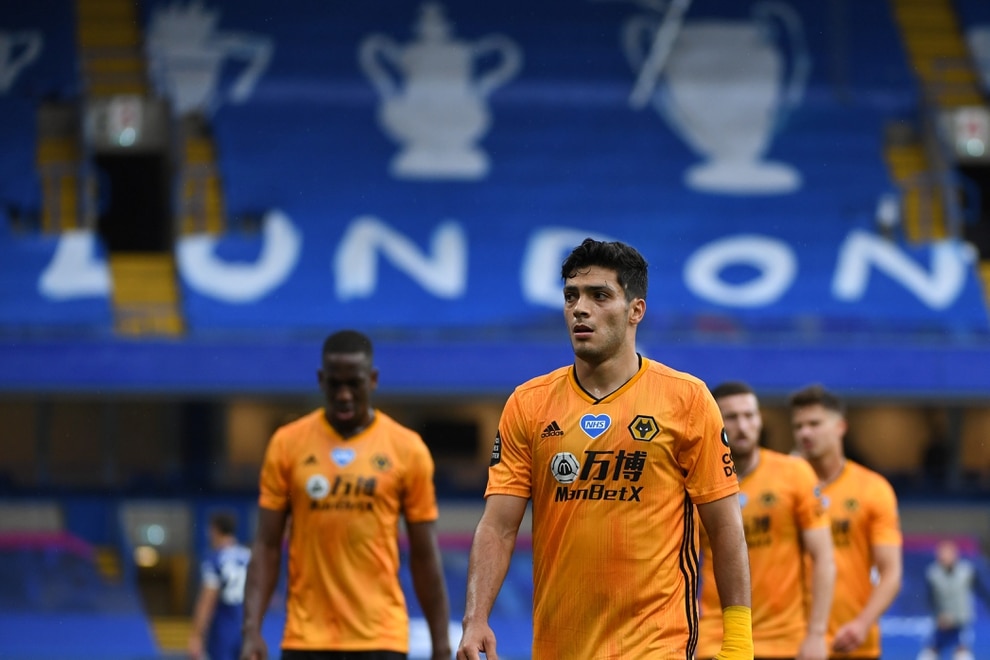 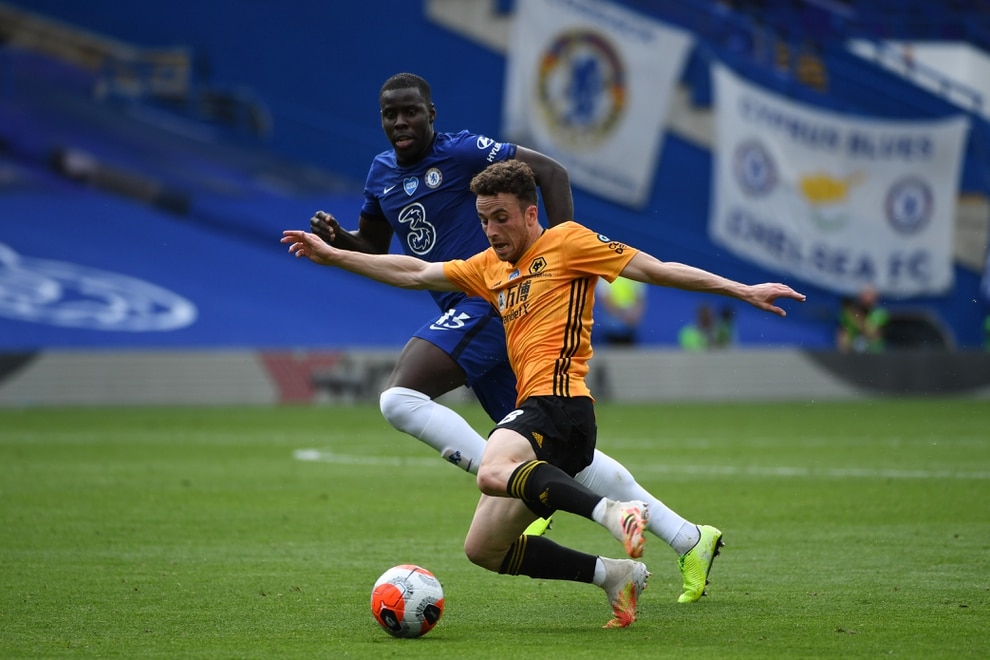 Jorginho of Chelsea and Joao Moutinho of Wolverhampton Wanderers (AMA) 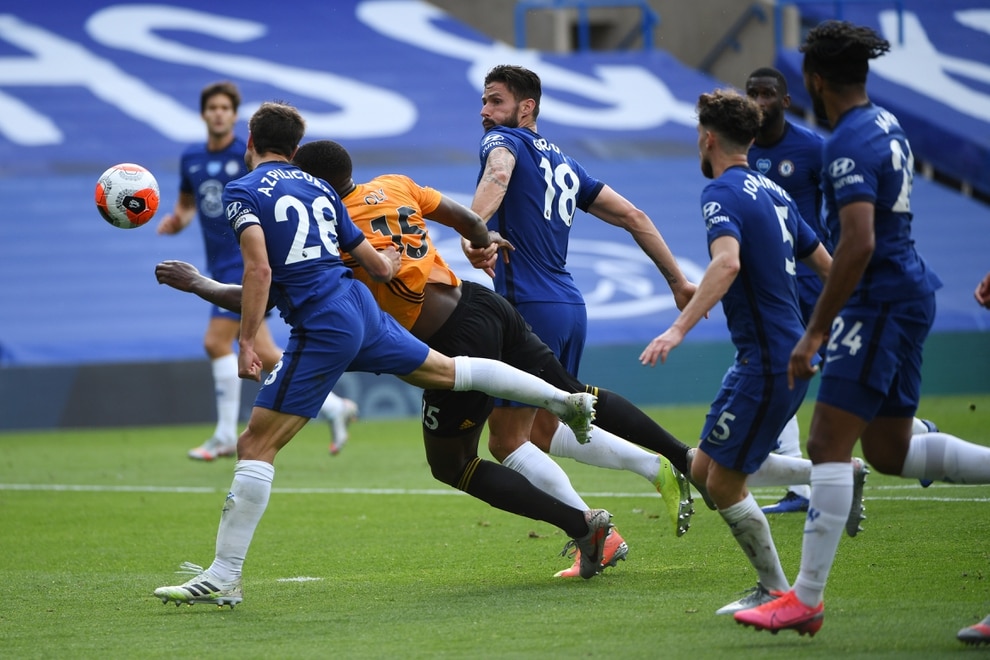 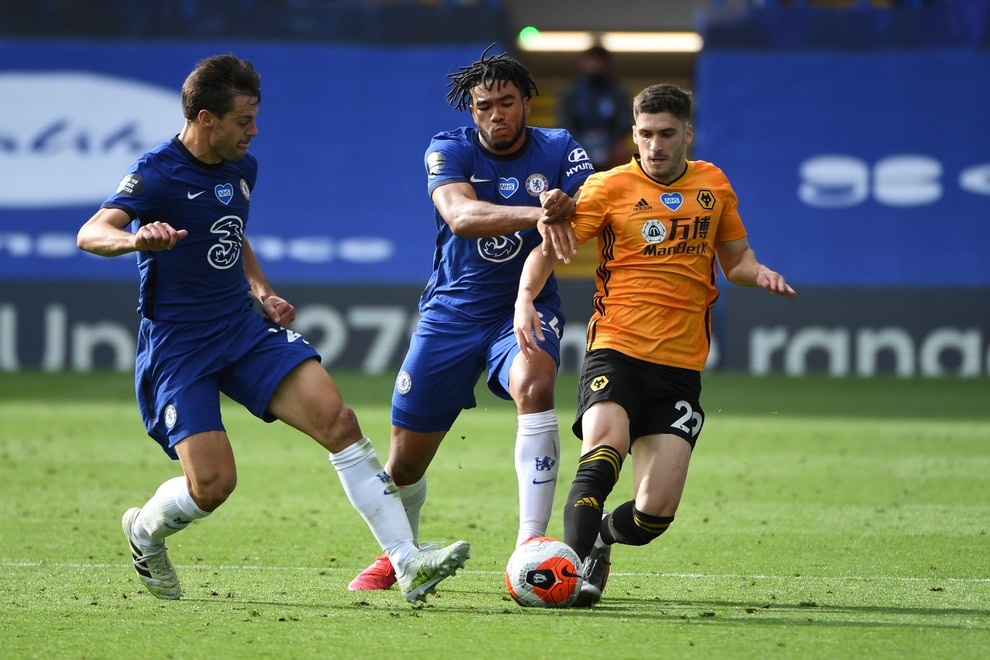 Nuno Espirito Santo's charges are now relying on the Blues, who won thanks to goals from Mason Mount and Olivier Giroud, to beat Arsenal in the FA Cup final this coming Saturday.

Tottenham started a dramatic final day in seventh but leap-frogged Wolves into sixth, on goal difference, thanks to a 1-1 draw at Crystal Palace.

Nuno's side, of course, still have this season's Europa to finish and could even grab a Champions League spot by winning that.

It is a waiting game, though, after Mount's dubiously-awarded free-kick was swiftly followed up by Giroud's tap-in.

It has been a brilliant season for Wolves, make no mistake, but now they are hoping Frank Lampard's men - after deservedly winning this one - can do them a favour.

There is the Europa last-16 second-leg against Olympiacos to look forward to a week on Thursday, also.

But they did not lay a glove on Chelsea in this one. Yes, the opener was a tough one to take - Pedro Neto not appearing to make much contact, if any, with Marcos Alonso - but the second goal was definitely avoidable.

On the whole, Wolves have a great deal to be proud of. The term has lasted a whole year and been so gruelling, yet so enjoyable. Fingers crossed, the Blues follow up this victory with another one at Wembley.

Wolves made three changes to the side which beat Crystal Palace 2-0 last Monday.

Neto and Diogo Jota lined up either side of top scorer Raul Jimenez in attack, while Romain Saiss came back into defence.

That meant Adama Traore, Daniel Podence and Joao Moutinho dropped to the bench, perhaps with the idea that they could all come on and take advantage of tiring Chelsea legs.

Still, those were pretty bold calls from Nuno, and the hosts had an eye-catching starting line-up, too, with Willy Caballero replacing the unconvincing Kepa Arrizabalaga between the sticks.

Matt Doherty - making his 300th Wolves appearance, a superb achievement from a player who has not only survived, but thrived - was tasked with marking the lively Christian Pulisic.

Wolves captain Conor Coady gave his team-mates some rousing words in the warm-up, calling for the same unity they have shown all season.

And they looked sharp in the opening minutes, with Doherty surging forward and winning an early corner. Nuno's lot were pressing high, and the Blues were keen to move it about quickly, too.

Wolves were particularly keen to get the ball down the right flank - Doherty and Neto aiming to double-team Alonso.

But on the other side, Jota, appearing a little frustrated from the close attention he was receiving, picked up the game's first booking as he lunged in late on Cesar Azpilicueta.

Although they had ventured into the box a few times, unlike Lampard's side, early on, Wolves were still aiming to put together a prolonged spell of possession. It was all a bit stop-start, with both teams giving away cheap fouls and also a little careless with their passing.

There was a heart-in-mouth moment for Nuno as Jimenez clashed heads with Kurt Zouma and needed a few minutes of treatment before Giroud provided another scare as he headed off-target.

And then came Chelsea's quick-fire double in first-half stoppage-time. Wolves will have considered themselves unlucky with the opener, as Mount expertly tucked away a controversial free-kick from 25 yards - given because Neto was deemed to have kicked Alonso.

They had no excuses for the second, though. The backline switched off as Giroud caught Coady cold and rounded Rui Patricio to make it two. Nuno will not have been pleased with that, at all.

Very uncharacteristic defending there from Wolves, who needed to produce more in the final third after the break as well - Jota quiet and Caballero not significantly tested.

Despite his lack of influence, Jota was not the one to make way for Traore at the start of the second period. Neto went off instead.

Traore - yet again with his arm oiled up to try to prevent more problems to his troubled shoulder - soon displayed his intent by embarking on a marauding run and finding Jimenez, whose low cross was gathered by Caballero.

Jota then forced the Blues keeper into a relatively comfortable save.

Chelsea, though, very much remained in control of proceedings, so Wolves made a triple substitution.

Nuno has been reluctant to make use of the extra changes allowed in the wake of the pandemic, but he realised the urgency by introducing Moutinho, Podence and Ruben Vinagre.

Ultimately, however, the same story continued. Wolves worked hard, but they could not break through the stubborn Blues.

Nuno used all five permitted subs for the first time as Bruno Jordao made his league bow, too, but it just was not to be. All eyes on the final.

Wolves feature: Only one Adama Traore? Actually there are four