Ruben Neves struck the winner as Wolves dumped league leaders Liverpool out of the FA Cup with a 2-1 third round win at Molineux. 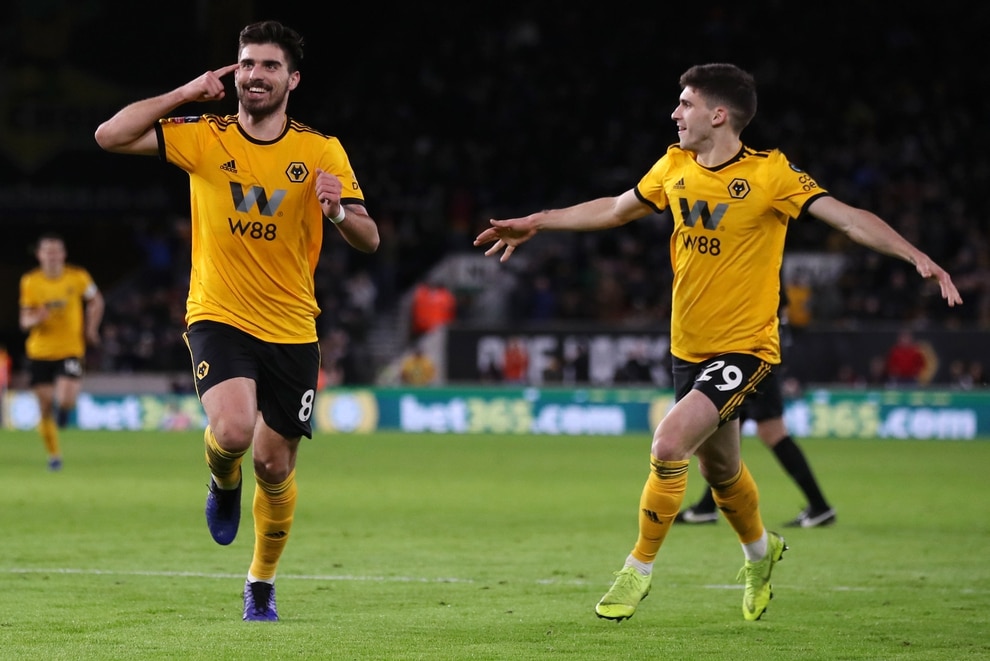 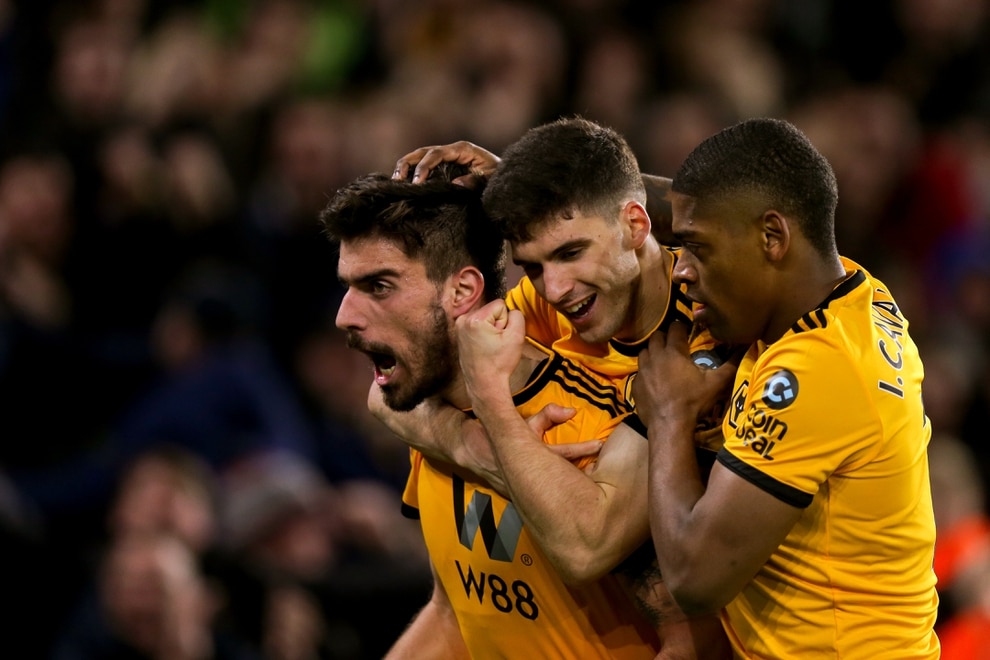 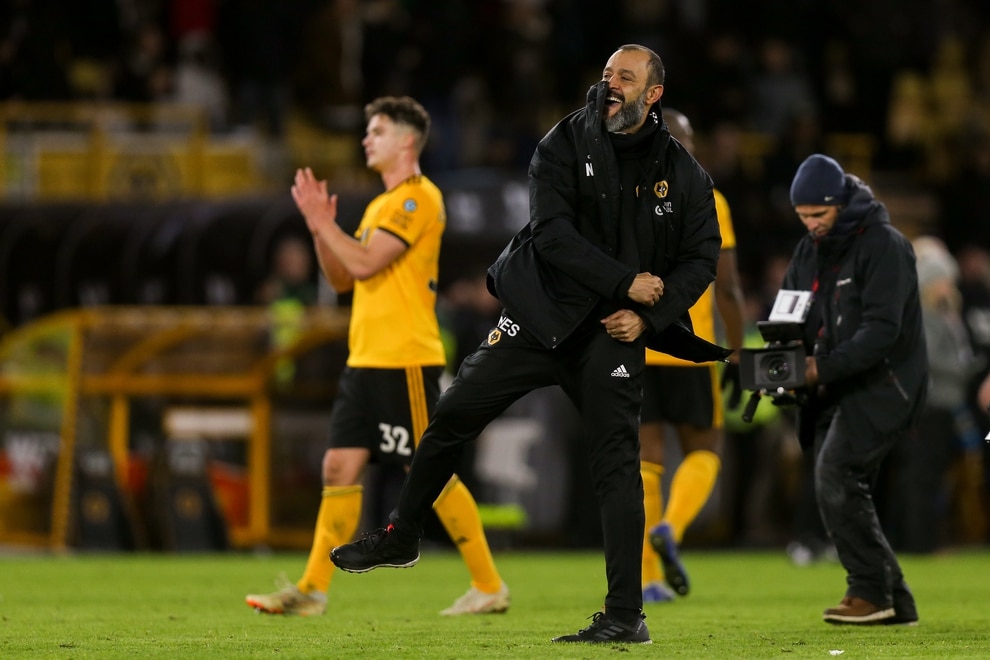 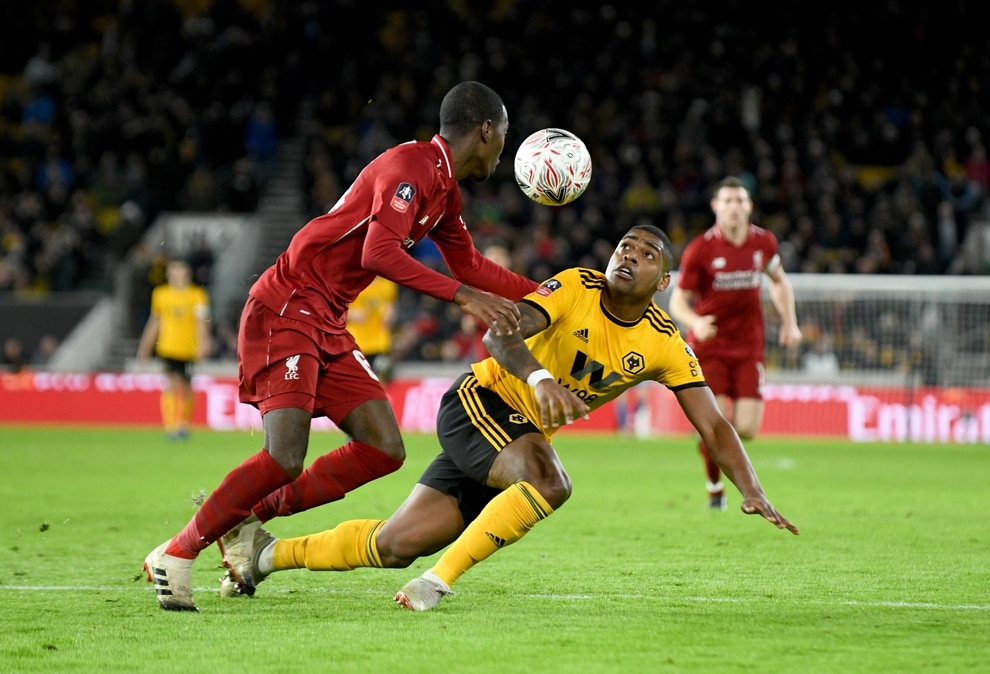 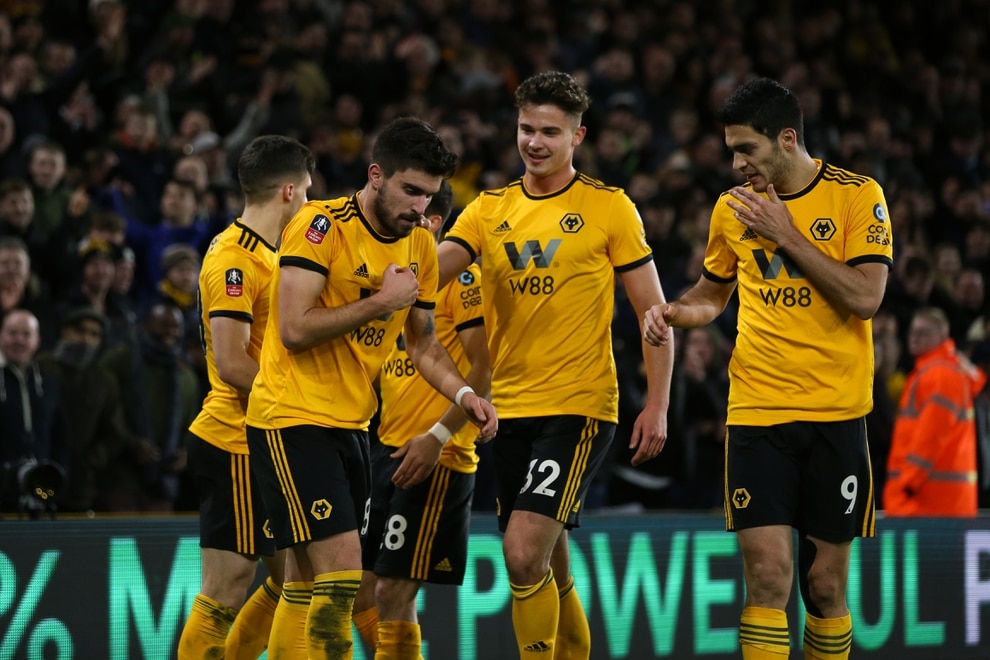 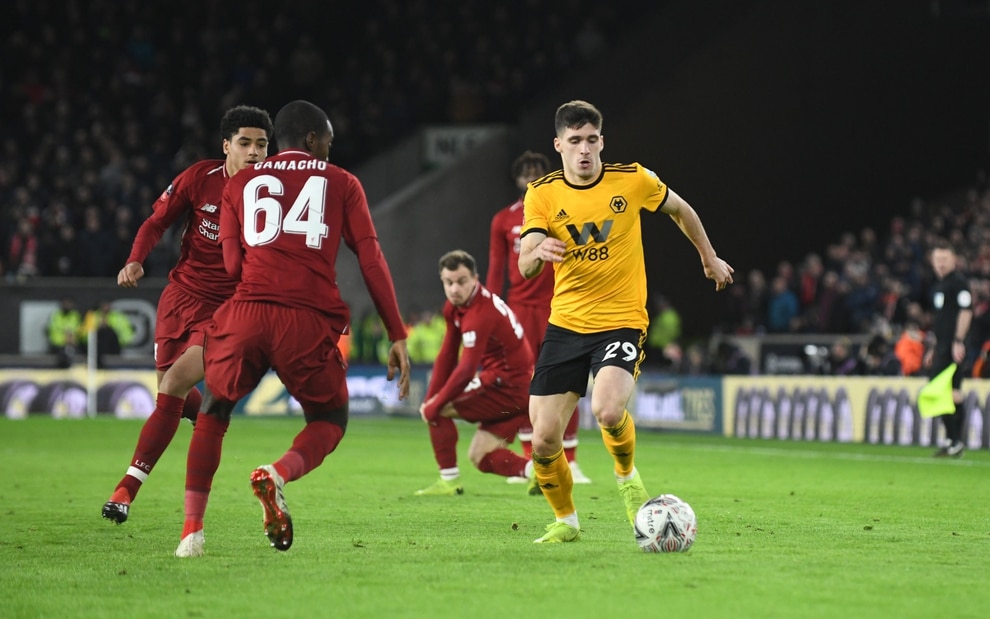 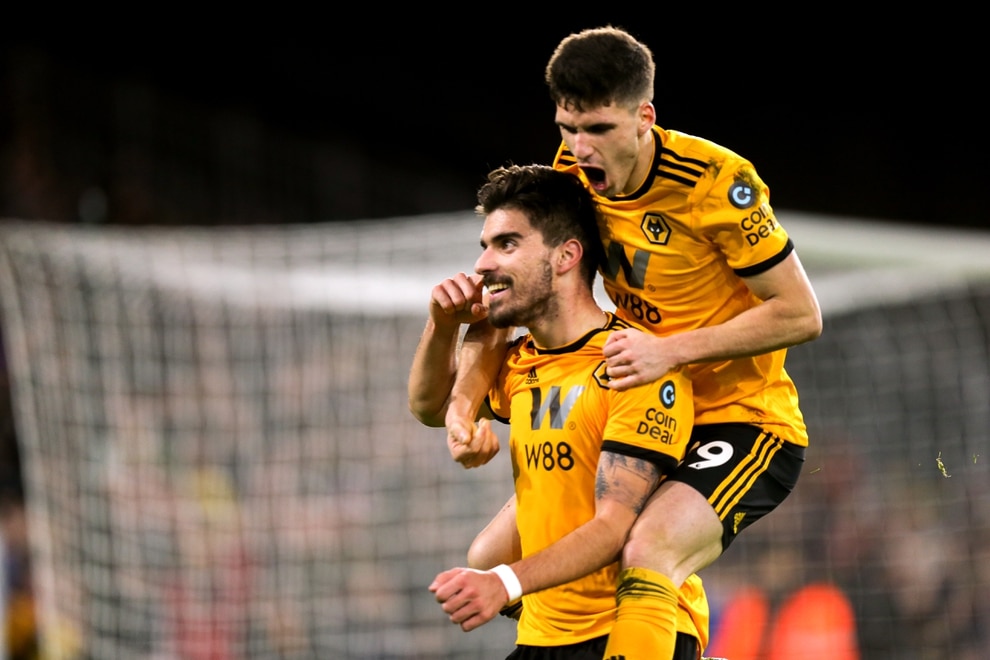 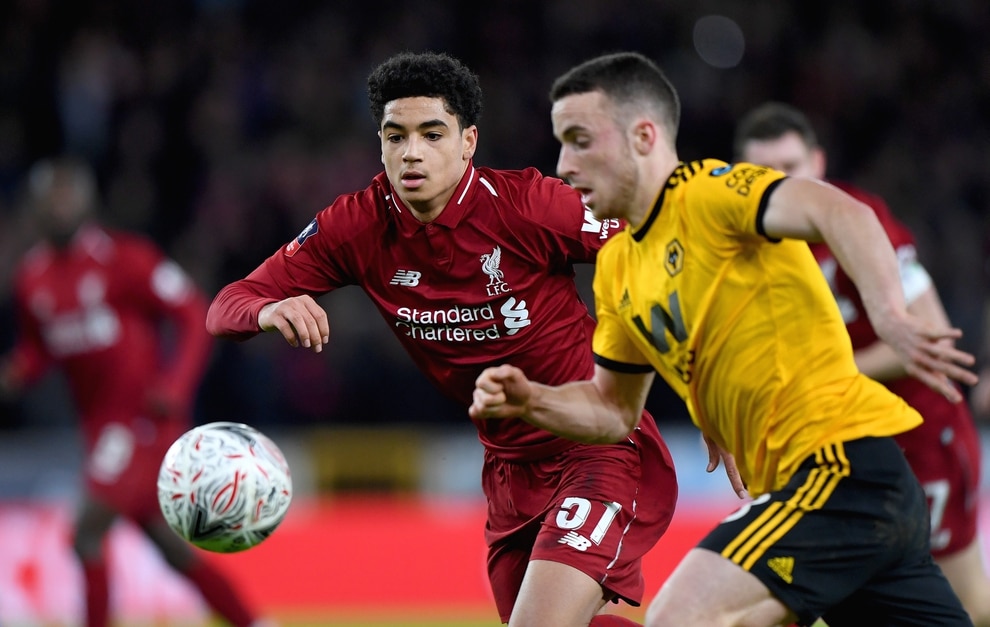 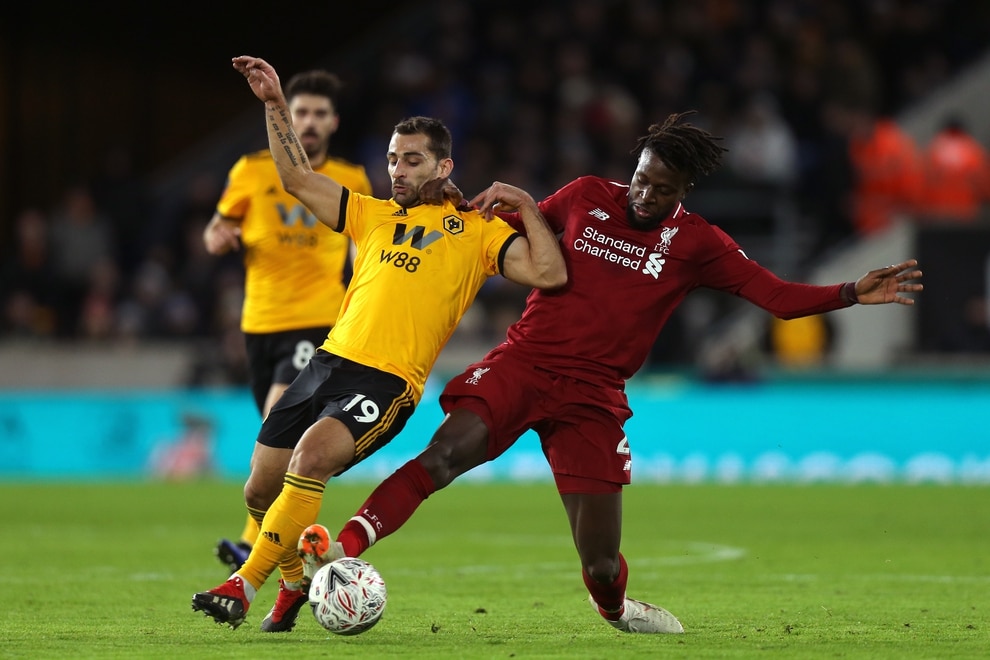 Raul Jimenez lit up a shocking first half when he scored with the game's first shot on target after 38 minutes, taking Diogo Jota's pass and coolly beating Simon Mignolet.

Liverpool equalised just after half time through Divock Origi but Ruben Neves almost instantly restored Wolves' advantage with a great strike from 25 yards.

Bill Slater was the last man to lift the FA Cup for Wolves, some 59 years ago.

On a night that Wolves paid tribute to their late legend, who died last month, you wonder if the current crop have one of the best opportunities in recent years to at last make a big impact in this famous old competition, writes Tim Spiers at Molineux.

After all, Wolves are one of the top 10 teams in England; the league table says so.

But given their penchant for beating sides from the 'big six' (league wins over Chelsea and Spurs and now a cup win over, it must be said, a severely weakened and de-motivated Liverpool) they will rightly rank as one of the favourites for the tournament.

It's cup football, it's unpredictable, anything can happen and the draw may be unfavourable, but at least Nuno Espirito Santo is taking it seriously, unlike a host of Premier League managers.

The Wolves head coach hasn't appeared to give much of a damn about the cup competitions during his Wolves tenure but this was the strongest XI he's named in a non-league game and it was enough to see Wolves deservedly through to the fourth round.

They started the game with less tempo than a group of tired grannies doing the Macarena but after Raul Jimenez, the scorer of seven goals this season, opened the scoring they looked something like their normal selves, certainly a marked improvement on the non-performance against Palace.

And two players who haven't contributed in exactly the manner they'd have hoped this season were crucial to this victory. Diogo Jota (you wonder how many more points Wolves would have earned over Christmas if he'd been fit) was sprightly and set up the opener, while match-winner Neves looked every bit the midfield maestro.

Wolves are in no danger of relegation this season. If the draw is kind...who fancies a cup run?!

Nuno made five changes from the team that lost 2-0 to Crystal Palace and naming a squad of first-team players.

John Ruddy came in for his first appearance since the Carabao Cup defeat to Leicester in September, while there was a welcome return for Diogo Jota from a hamstring injury.

Matt Doherty and Rui Patricio were rested but other than that it was a strong as an XI as possible which include a shuffle in midfield, with Leander Dendoncker and Ruben Neves joining Joao Moutinho.

Liverpool, on the other hand, made nine changes and included two teenage debutants in Curtis Jones and Rafael Camacho.

Divock Origi, who Wolves courted last summer, was up front, with Mo Salah, Roberto Firmino and Sadio Mane all on the bench.

After the usual pre-match lights show and fireworks, Molineux, which wasn't quite full, paid tribute to Bill Slater with a minute's applause.

The game was certainly a highly-anticipated one – but a really poor first half didn't do the pre-match billing any justice.

It was a dire, turgid, almost action-less 45 minutes in which both teams were well below their best.

The Reds made the better start but suffered an early blow when Dejan Lovren hobbled off injured. Ki-Jana Hoever filled the vacuum left by the experienced centre half in what was now a makeshift back-line if ever there was one, with two debutant teenagers (Hoever and Camacho), a midfielder (Fabinho) and Albert Moreno.

However, Wolves initially failed to exploit their inexperience. They looked to win the ball back in midfield and counter the Reds at pace but just never got going.

At the other end John Ruddy had to deal with a couple of menacing crosses and Xherdan Shaqiri sent a shot well wide, but in truth the lacklustre Reds didn't look anything but there for the taking.

Jota was looking frisky for Wolves but had no help. Moutinho and Neves both had shots from range but their efforts went more into orbit than a NASA spacecraft, while a succession of Ryan Bennett long-throws yielded no chances of note.

It was a desperately poor match. You wondered if BBC One had turned it off to show repeats of Gardeners' World instead.

Then the face of the tie changed completely seven minutes before the break – and Wolves scored with the first shot on target from either side.

Jota nipped in to win the ball after James Milner accidentally stood on it – he played to Raul Jimenez who raced into the penalty area and, with Jota cleverly blocking Milner's attempts to get back, had time to beat Simon Mignolet with a smart finish.

It was the Mexican's seventh goal of an increasingly successful season and the signal for Wolves to improve.

They dominated the next few minutes before the break, with two Ruben Vinagre crosses causing problems and Jimenez seeing a goalbound shot blocked.

Liverpool had arguably caused Wolves fewer problems than any opposition team this season.

It was inevitable they'd improve in the second half (they couldn't be any worse) but Wolves had only themselves to blame for letting Klopp's team back into the game on 51 minutes.

Coady dithered over a clearance, the ball fell to Origi who worked an angle and fired a superb effort past Ruddy from 18 yards.

But any fears that Liverpool would take control were banished just four minutes later when Wolves almost instantly retook the lead.

Neves' long shots have been well below his high standards in recent weeks but this time the Portuguese midfield maestro caught his 25-yard shot sweetly – it skipped off the turf and bounced past Mignolet at his near post to restore Wolves' advantage in what was now a lively cup tie.

The first half was bereft of chances but both teams came close to scoring again in the space of five minutes.

Jimenez almost took advantage of poor defending from Hoever but couldn't convert from a tight angle – and then Ruddy pulled off a wonderful save to tip Shaqiri's corner-bound long-range free kick onto the post.

Klopp called for the cavalry with Salah and Firmino sent on, while Matt Doherty replaced Otto with 16 minutes left and then Helder Costa came on for a tiring Jimenez.

The home crowd were trying to see Wolves home, increasing the noise volume, while Wolves looked to keep possession and see it out.

There were obvious threats at the near end and the impressive Dendoncker twice did well to intercept and clear at crucial moments, while Bennett headed clear ahead of Ruddy from Salah's deflected shot.

There were a couple of hairy moments late on and Mignolet came up for a couple of set pieces in injury time – but Wolves saw it through to reach the fourth round.

37 - GOOALLLL!!! After a dismal period of play, Wolves fans are woken from their slumber as Jimenez puts them in front! Lackadaisical play from Liverpool's midfield sees Jota win possession. He plays the ball to Jimenez, who bursts into the box and slots past Mignolet. Cool finish by the Mexican.

53 - Goal! Liverpool are level. Having had a very quiet first half, Origi, who Wolves were thought to be interested in signing earlier this season, fires home from the edge of the box. Sweetly struck, into the top corner. Ruddy helpless.

56 - GOOALLLL!!! Wolves were not behind for long! Neves thumps them back in front from 25 yards. Excellent technique from the Portuguese midfielder, with the pace and precision of the strike beating Mignolet at full stretch, sending the South Bank crazy. That is vintage Neves. Brilliant.

69 - Big save! Sturridge wins a free-kick on the edge of the box for the Reds. Shaqiri steps up to take it and wraps his left foot around the ball. His effort is destined for the top corner, but Ruddy gets his fingertips to it and diverts the ball onto the post. Great goalkeeping.