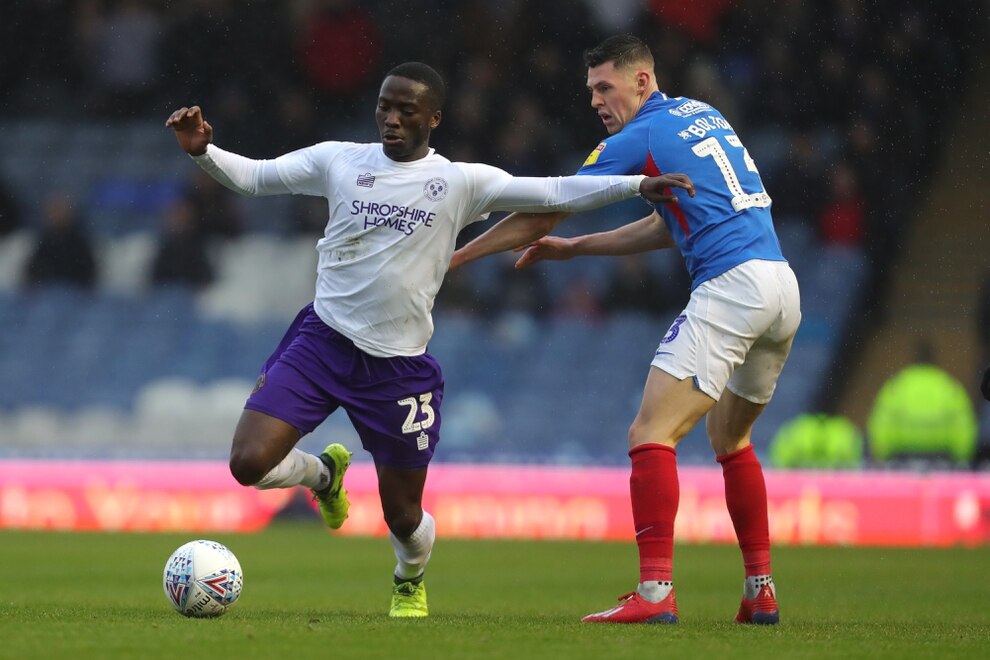 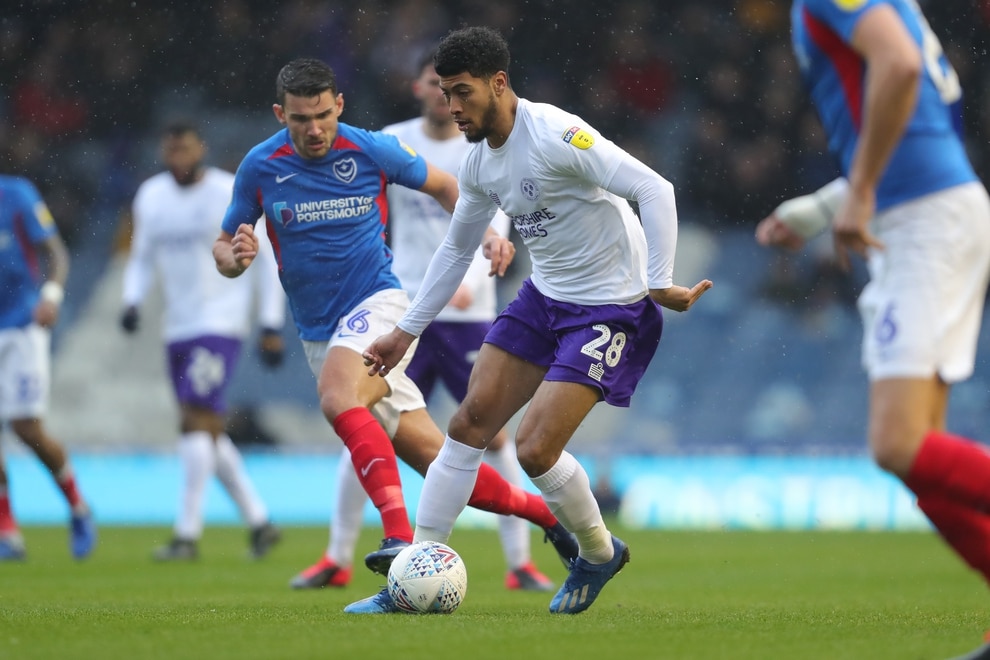 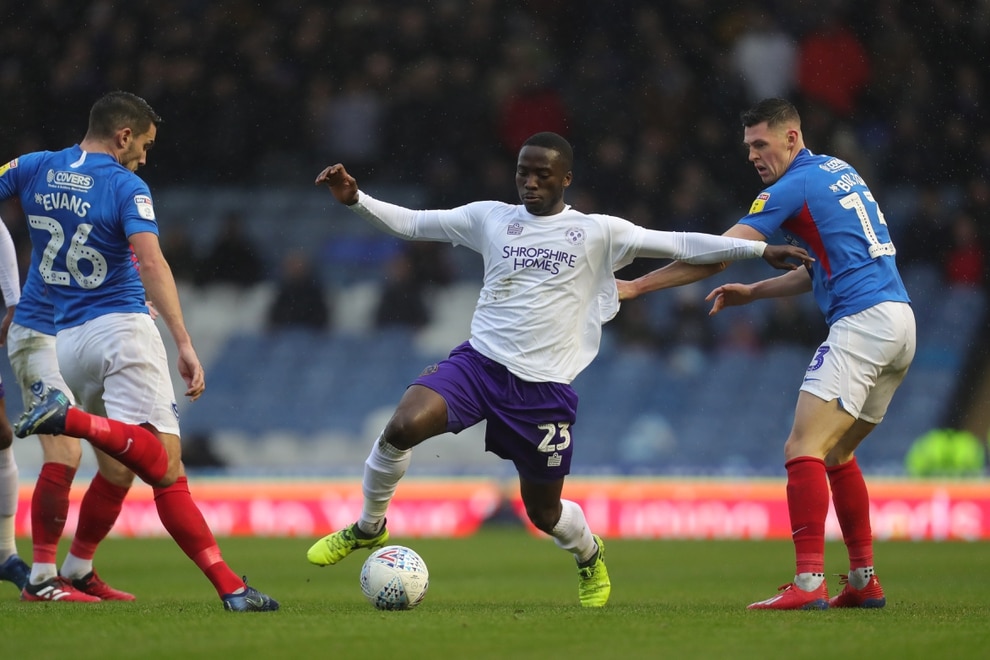 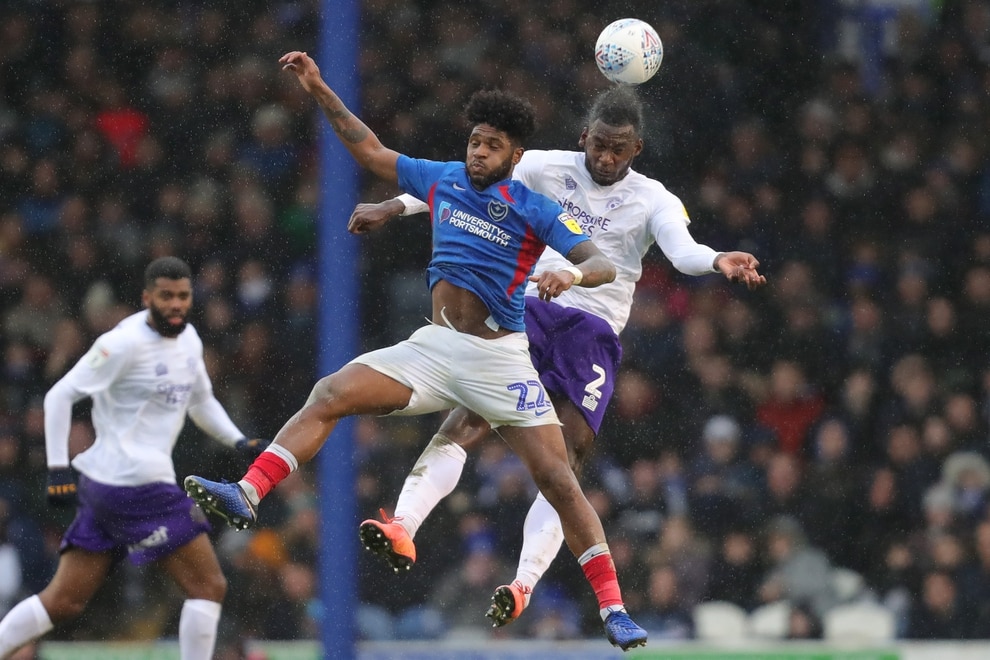 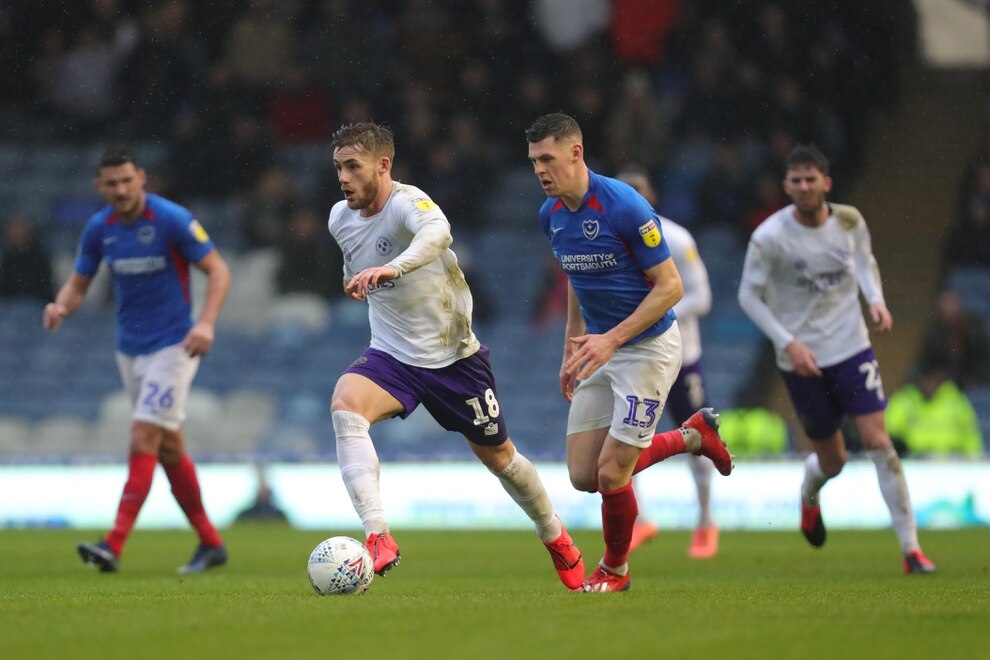 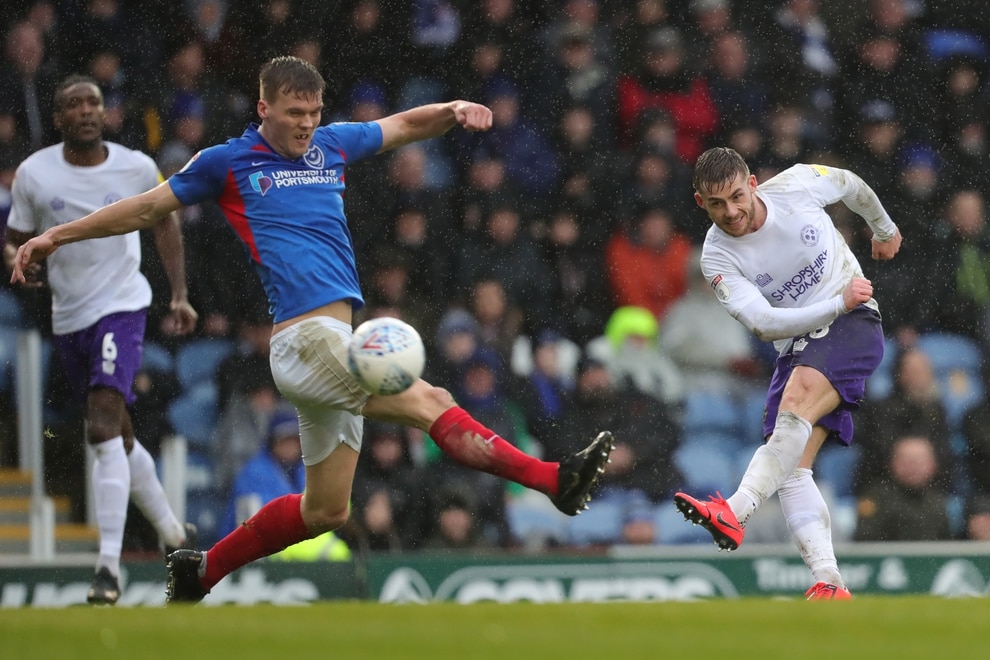 Conor McAleny of Shrewsbury Town has a shot on goal (AMA) 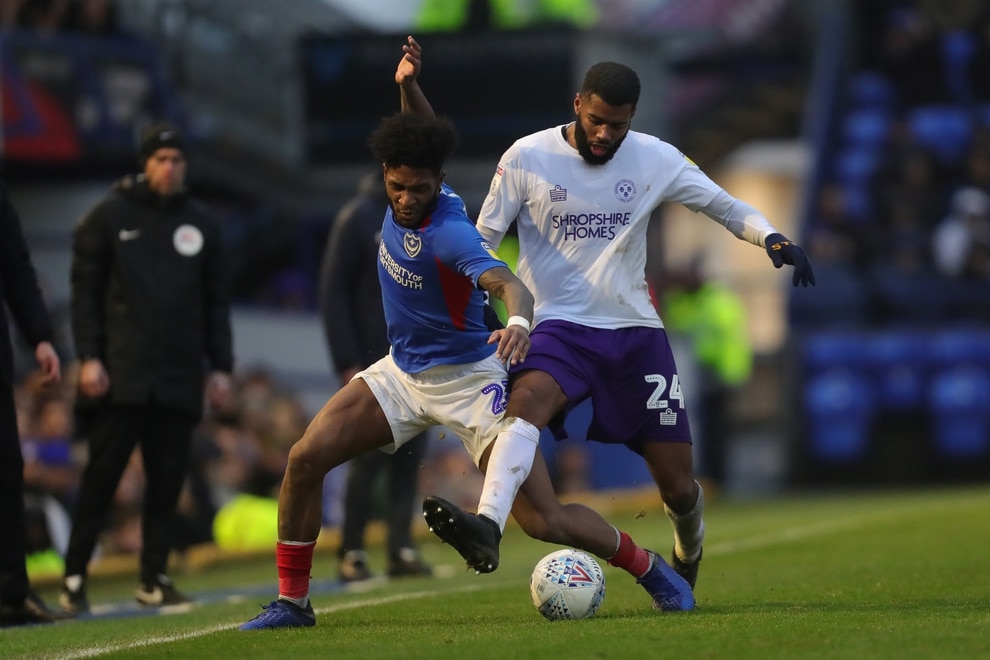 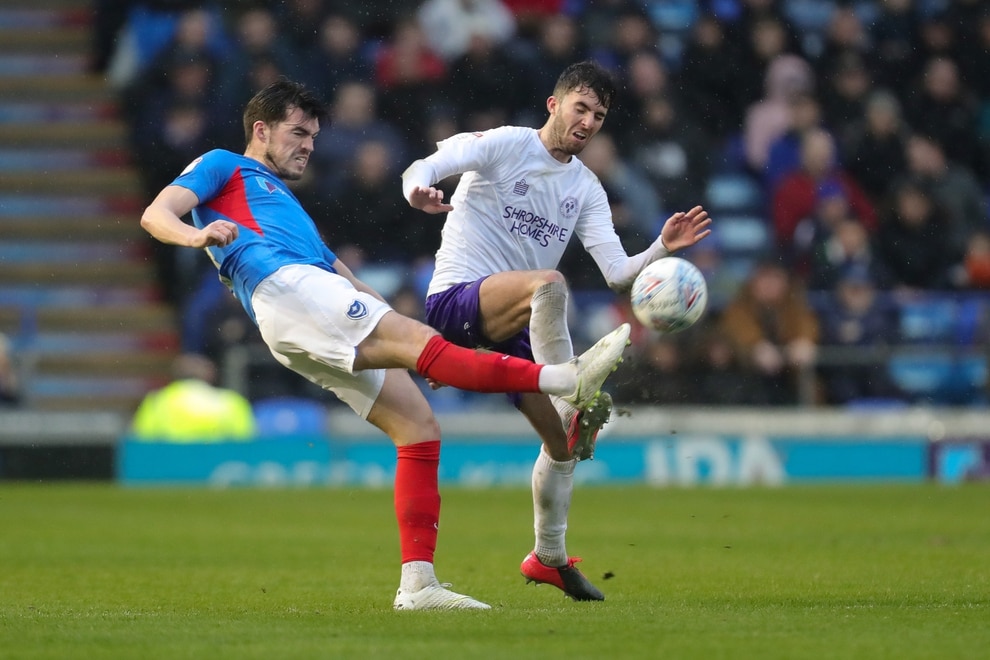 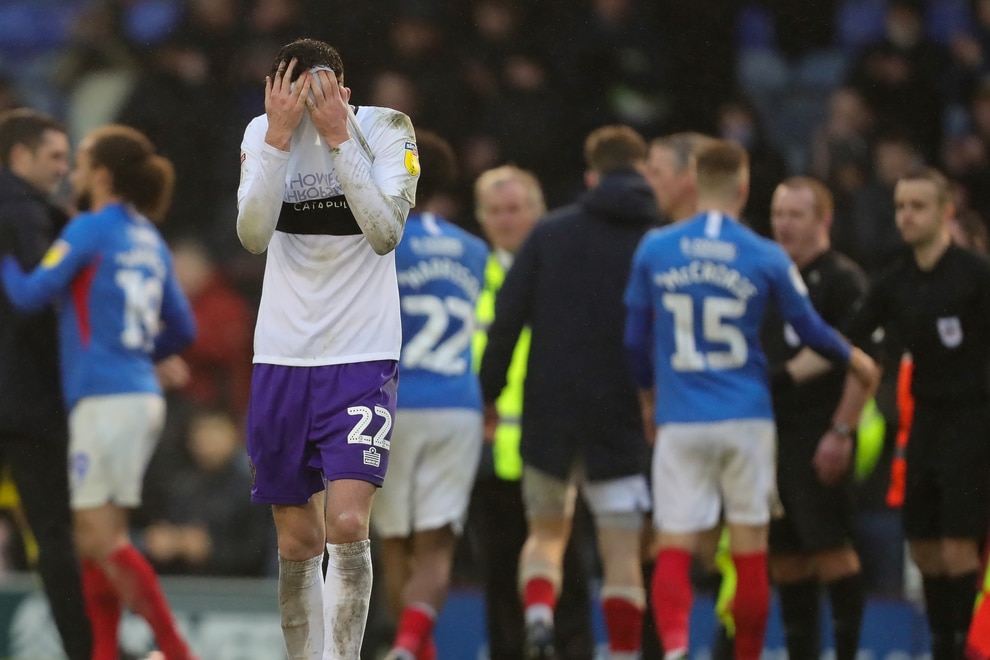 Ellis Harrison netted shortly after the hour in an even contest where Ricketts’ men looked as competitive as they have been for a number of league games.

But sub John Marquis converted with eight minutes remaining to kill off Shrewsbury and mean it is now 10 games since Town’s last win, at Blackpool on December 21.

But the visitors, who were giving as good as they got until Harrison’s opener, failed to find a response and the in-form hosts - playing in front of a sell-out home crowd - could have netted two or three more late on as pressure from fans continues to circle on boss Ricketts.

It is now 10 wins from 11 for the Fratton Park side, who remain sixth in their promotion charge.

For Shrewsbury it’s another extremely disappointing outcome and a third defeat in four in league action, where they sit 17th.

Just over 300 Salopians who travelled to Portsmouth saw an improved performance on poor back-to-back Montgomery Waters Meadow performances but were left hugely frustrated at full-time again as the current run now means just four points collected from a possible 30.

Ricketts continued the recent theme of rotation for the trip to wet and windy Hampshire as Storm Dennis took hold.

There was a change between the sticks as Max O’Leary returned in goal after two games on the bench. Joe Murphy was missing from the matchday 18 with a knock so there was a place for new-boy Harry Burgoyne as a substitute.

Both wing-backs were changed as Scott Golbourne and Donald Love came out. Sam Hart took the left wing-back role while Aaron Pierre, back in the side after a rare game off, shifted into the middle with Beckles on the right.

Sean Goss made up a three-man central midfield with skipper Dave Edwards - with the armband for the remainder of the season with injury-victim Ollie Norburn sidelined - and Josh Laurent.

Home fans needed no excuse to brave the conditions given their club’s flying recent form. Kenny Jackett’s men were checked somewhat with a midweek defeat at Coventry putting to an end a club-record run of nine wins.

But a sold-out home allocation at Fratton Park showed that the Pompey faithful were well up for a late charge into promotion contention after what was an extremely tough start to the season - which began way back in sunny August with a Ryan Giles thunderbolt handing Ricketts’ men all three points.

The sides were evenly-matched early on. Harness’ low snapshot from the edge of the box was easy for the returning O’Leary, while Town lone frontman Udoh showed strong early signs, winning headers and holding the ball up well.

Pompey were not afraid to try from distance. Home skipper Tom Naylor’s effort flew over from 30 yards while a Goss free-kick from the left was whipped in devilishly but Beckles and Ebanks-Landell were unable to connect.

The first clear opening came the way of Portsmouth’s on-loan left-back Steve Seddon, who carved a yard in the box but could only shoot at O’Leary.

A Shrews corner, earned after neat McAleny and Josh Laurent play, ended up putting the visitors in trouble after crossed wires allowed Pompey to break. Ro-Shaun Williams hacked Ronan Curtis down near the halfway line, picking up an early caution for his troubles.

He was joined in the referee’s notebook by Ebanks-Landell who, barely a minute later, hacked down Harrison much to the annoyance of the home faithful.

Ricketts’ men were giving as good as they got for the first half hour before the hosts should have better with a couple of openings.

Hart was caught out as a smart ball found the advanced Harness and his fine low cross was blazed over the top from six yards by striker Harrison.

Harness could have done with the same composure seconds later as, while two-on-two, he opted to ignore the free Harrison and instead had an ambitious shot blocked by Pierre.

Shrewsbury responded with their first effort on target 33 minutes in. After another neat Goss ball, the busy McAleny worked space on the right side of the box before cutting on to his left and forcing a sprawling parried save from Alex Bass with his left-footed curler.

Aside from a couple of sloppy bits of possession, the visitors were pleased with their first half display having largely frustrated Pompey and looked threatening on a couple of occasions.

Seddon had O’Leary a little worried on the strike of half-time but his measured 30-yard strike was watched over the crossbar.

Ricketts made a half-time change, like in Tuesday’s defeat to Stanley, and a swap in the wing-back positions saw Southampton loanee Kayne Ramsay replace Hart - who had been the target of several Pompey attacks.

Beckles switched to left wing-back with Ramsay in on the right.

Town started the second period well, with Udoh hold-up play resulting in a free-kick which Goss sent into the side netting from just outside the left corner of the penalty area.

Sub Ramsay was straight involved. After McAleny and Udoh combined, the young defender was sent flying down the right into Pompey’s box. A fine low cross was begging to be converted but just flicked behind by a home blue shirt.

Portsmouth were unable to clear with Goss’ resulting corner and McAleny’s stinging half-volley from the edge of the penalty area tested keeper Bass, who was able to parry clear. Edwards’ low strike from distance then kept the keeper honest.

Home boss Jackett was forced into a double roll of the dice as Marquis and Ross McCrorie were sent on.

Town were applying pressure and passed up a big opportunity as Ebanks-Landell diverted Beckles’ cutback from a set-piece over the bar. The defender looked frustrated with himself as a presentable chance came and went.

Shrews were defending manfully in the hunt for a first league clean sheet since late December but they were unable to hold on.

Ebanks-Landell and Williams made good blocks but a right byline cross by sub McCrorie found Harrison at the back post and the former Ipswich and Bristol Rovers hitman converted a fine header beyond O’Leary in Town’s goal.

Ricketts reacted by bringing Lang and Cummings on for the impressive Udoh and McAleny.

The forward duo struggled to get involved as Town could not muster an immediate response.

The hosts almost profited from a Storm Dennis-assist as O’Leary’s goal kick gusted into a wave of blue shirts. A nice pass released sub Marquis in on goal but O’Leary atoned with a big stop to deny the striker.

Pompey were breaking forward at will. Harness found space inside the box and should’ve picked out the bottom corner but his tame finish was straight at O’Leary.

Ricketts’ side looked like mounting a late response as Beckles whistled a shot over the top left corner after nice work by Ramsay and Cummings with nine minutes left.

But Shrews were dead and buried as Marquis made no mistake with his next chance. The visitors were unhappy as Goss looked like he was caught mid-pass but Portsmouth broke and the striker was played through on goal, this time easily sending O’Leary the wrong way.

The wind drained from Town’s sails as the match ended a precession despite Laurent’s late effort from distance that stretched Bass in added time.

But Shrews were left empty-handed again as the dismal run continues with two more huge home games looming and fans looking for answers.