The big match build-up went on and on, but for Shrewsbury Town it was all-but over inside nine minutes. 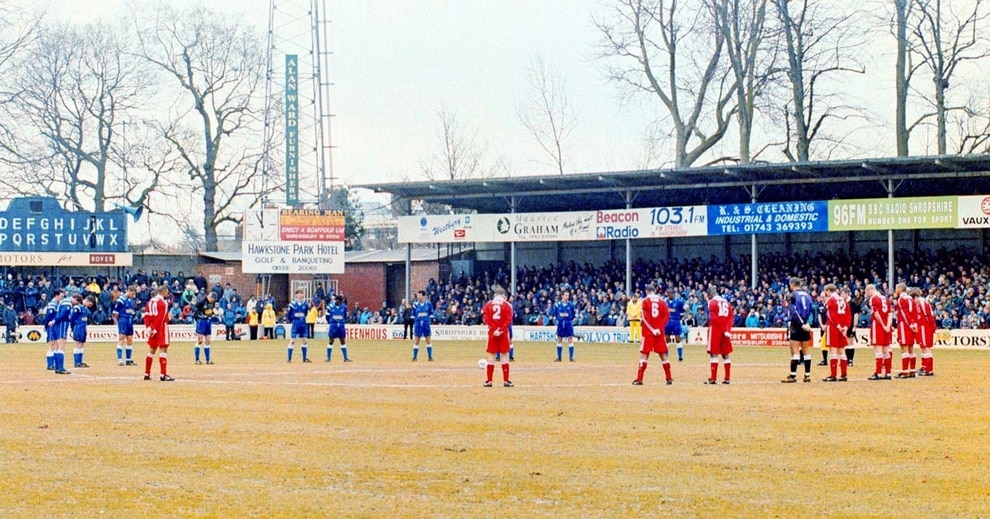 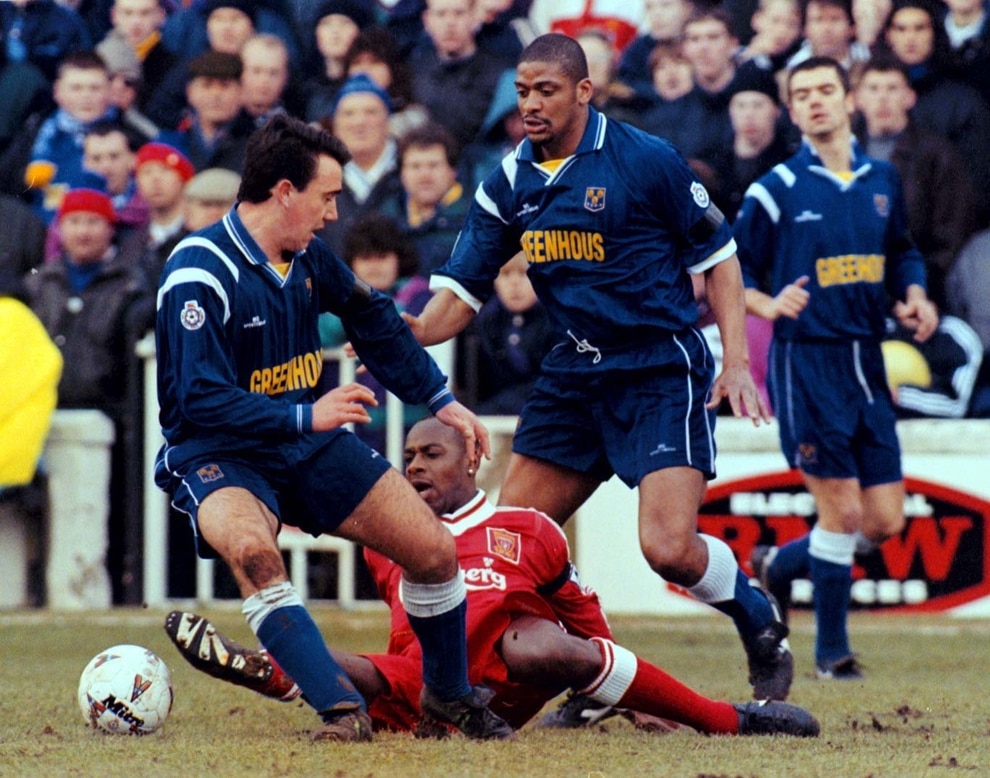 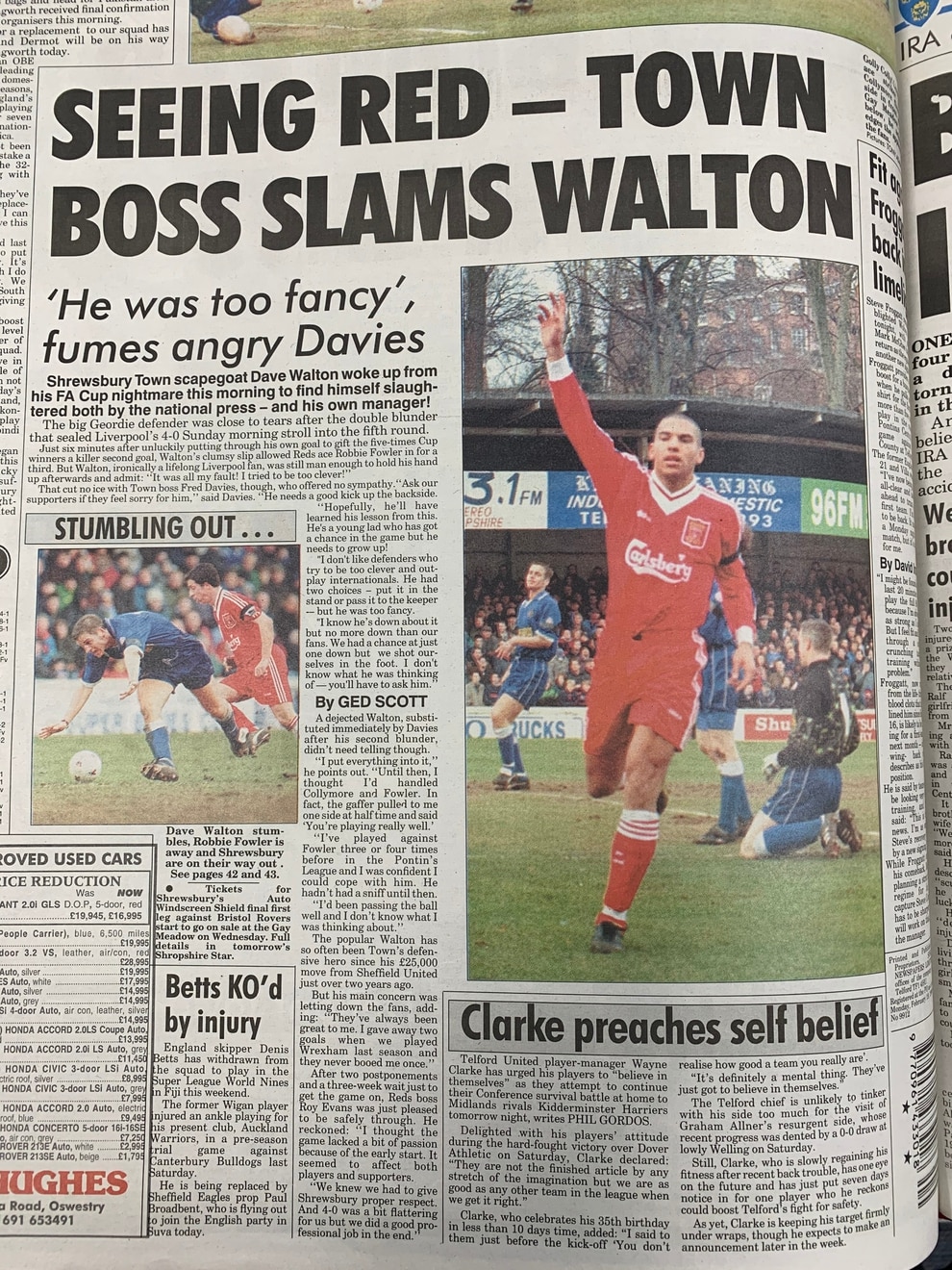 How the Shropshire Star reported the fall-out from the defeat 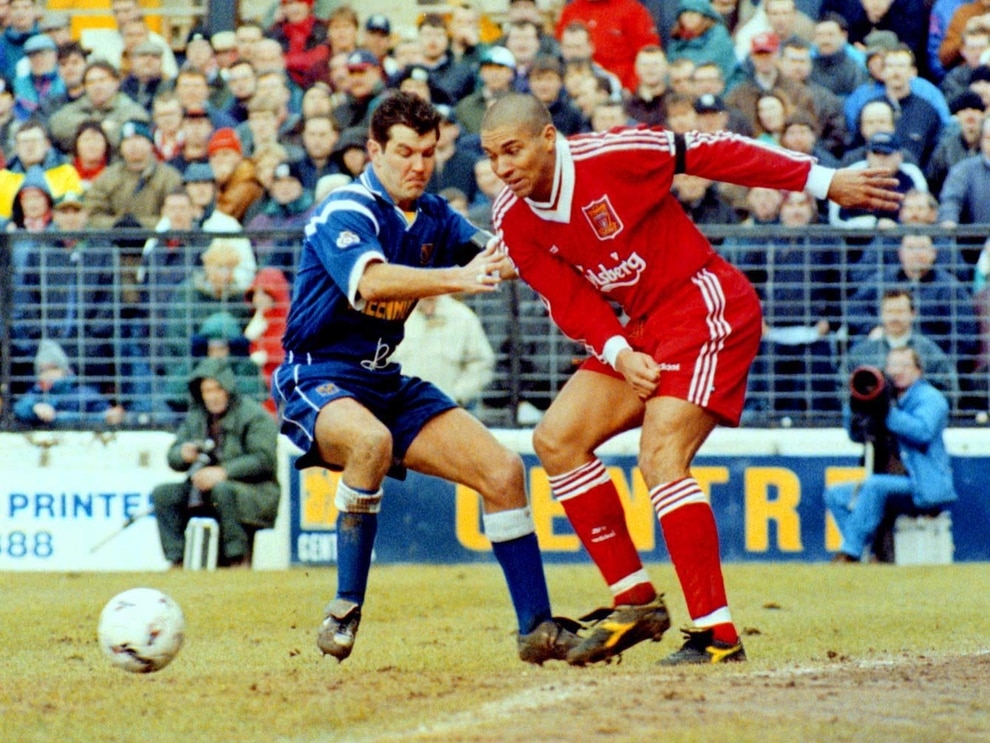 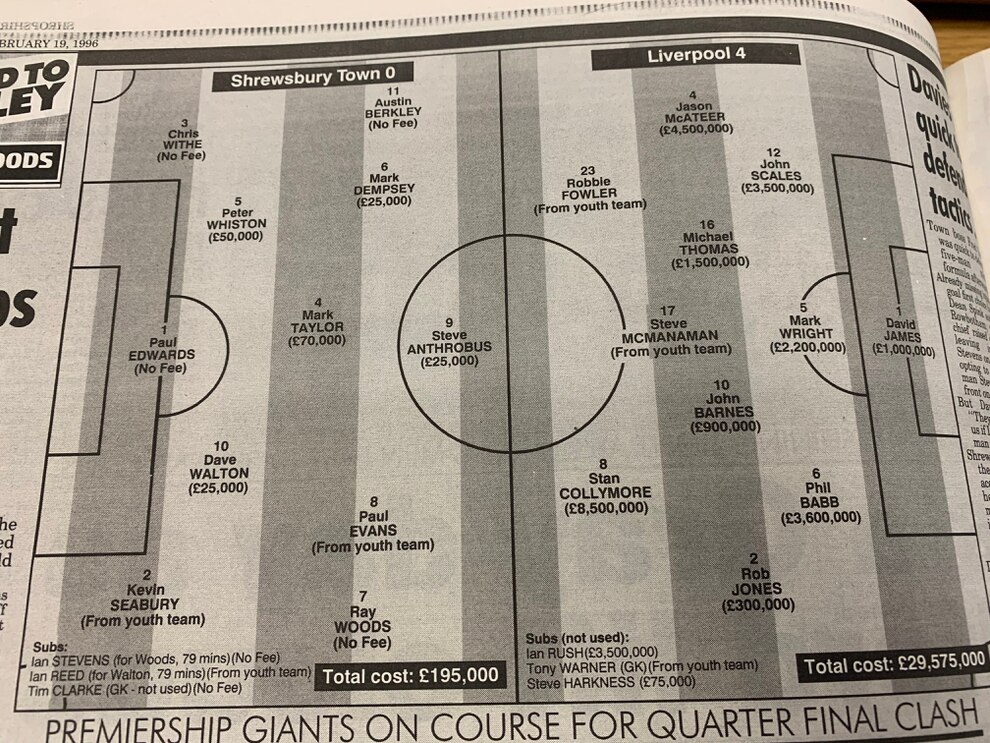 Teams news from the day 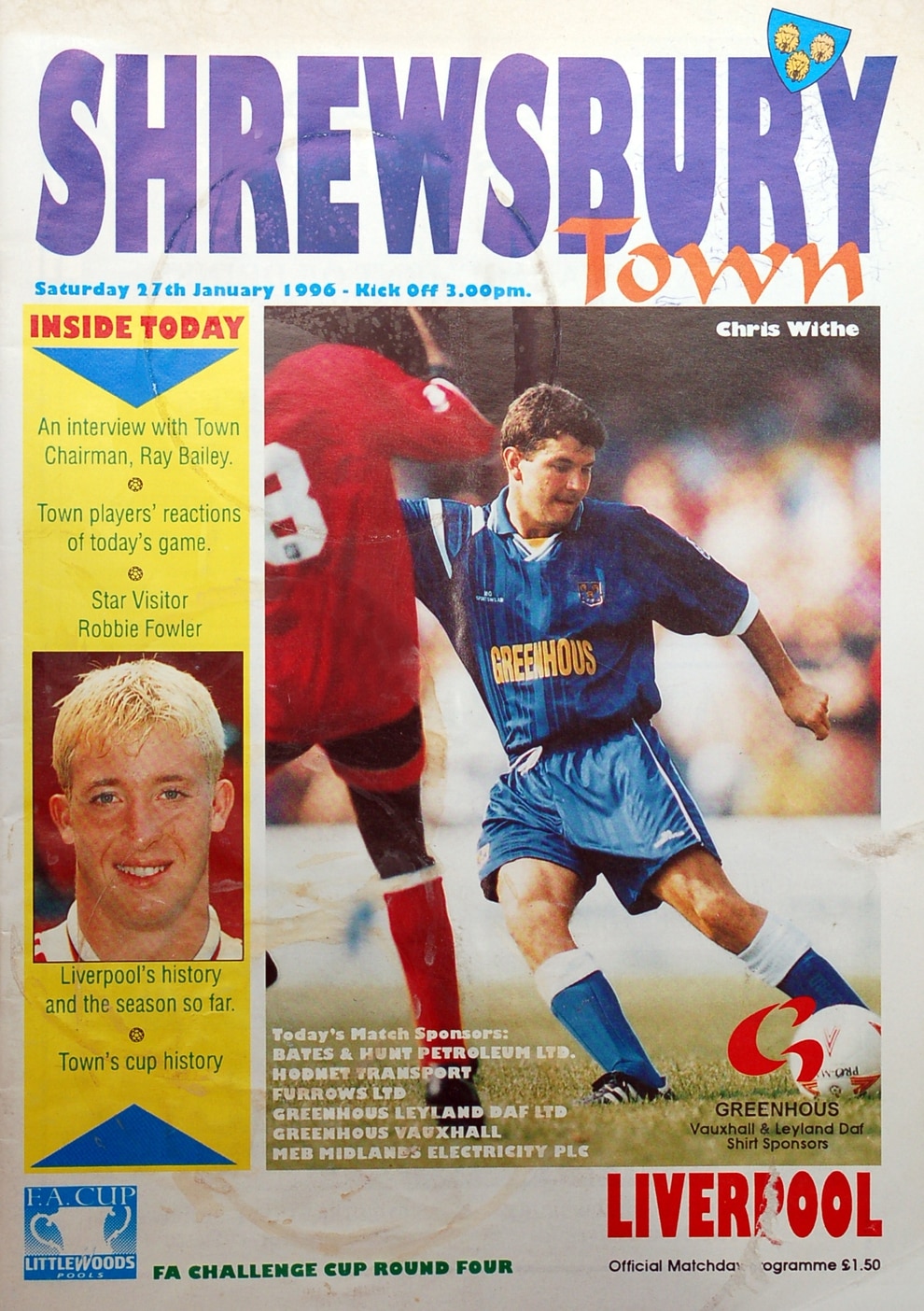 This programme is dated January 27, 1996, for the Shrewsbury Town v Liverpool game. It is among the memorabilia of Brian Binnersley of 8 Armoury Gardens, Shrewsbury

Town won plaudits for giving Liverpool the utmost respect ahead of kick-off as the fourth round FA Cup tie finally went ahead four days after the death of the great Bob Paisley.

But Fred Davies’ men gave the superstar Reds side too much respect all afternoon.

Mark Dempsey’s dramatic late third-round replay winner against Fulham – one of just six goals in three years for the Dubliner – had confirmed the tie. Much as Aaron Pierre’s 30-yard piledriver against Bristol City set up Shrewsbury v Liverpool II.

“I saw Demo inside me and I thought he’s a better finisher than me, so I gave him the ball and he put it away,” said Austin Berkley.

Wing wizard Berkley with one of the all-time Shrewsbury assists to lay on Mark Dempsey’s late Gay Meadow winner against Fulham in an FA Cup third round replay to set up a first competitive meeting against Liverpool.

Dempsey’s finish would not have been possible without that familiar charge down the field by Berkley.

The fourth round draw had long since been made and everyone knew Liverpool were the prize.

Tickets to see the Reds in town were like gold dust and many missed out – just ask Dave Edwards, who remains scarred to this day.

But snowy conditions meant preparations for the big day went on and on...and on.

The clubs tried to move the Meadow tie to Anfield but the FA were quick to say no. The tie was set for January 27, 1996. But then came the freeze. Snow fell as did games up and down the country.

Shrewsbury were motoring on other fronts too. Graham Turner’s Hereford, featuring plenty of familiar faces, were knocked out at the southern semi-final stage of the Auto Windscreens Shield. Town would, of course, reach Wembley where – predictably – defeat followed.

Liverpool was re-arranged for February 7 but that date quickly fell by the wayside too. Saturday, February 17 was the new big day – until it was put back another day. Sunday 11am and Shrewsbury ground to a halt.

The visitors were in mourning. The most successful manager of the Reds’ illustrious history died four days earlier. Town supporters showed their class. They stood immaculately to a full three-minute version of ‘You’ll Never Walk Alone’ ahead of kick-off before a minute’s silence in honour of Paisley.

As spring threatened to spring after weeks of biter chill, Roy Evans’ visitors were 4-0 winners. Stan Collymore’s ninth-minute opener was an early blow that the hosts failed to recover from. A three-goal flurry inside the final 21 minutes gave the required gloss to the global superstars.

Davies’ side were set firmly in their 4-1-4-1 formation led by Steve Anthrobus feeding on scraps. Salop were without injured top scorer Darren Rowbotham – a victim of the Fulham replay – and fellow forward Dean Spink, which really blunted their frontline.

Liverpool, with 11 current or future internationals starting, were reported by one national outlet to be enjoying a leisurely stroll on the banks of the Severn. It was a day for Dave Walton, a boyhood Red, to forget. His dream day turned into something of a nightmare.

At that point all faint Shrewsbury hopes were put to bed.

Robbie Fowler had been ineffective throughout but notched a third six minutes later before Jason McAteer steered in a brilliant assist from man of the match Steve McManaman. The visitors, captained by the experienced John Barnes with another veteran by the name of Ian Rush on the bench, were as comfortable as can be.

Both teams would lose finals that season. Shrews to Rotherham in the Football League Trophy and Liverpool’s white-suited Spice Boys to Manchester United in the Cup.

Shrewsbury Town and Doncaster Rovers charged by FA after incident

What the papers say – February 28