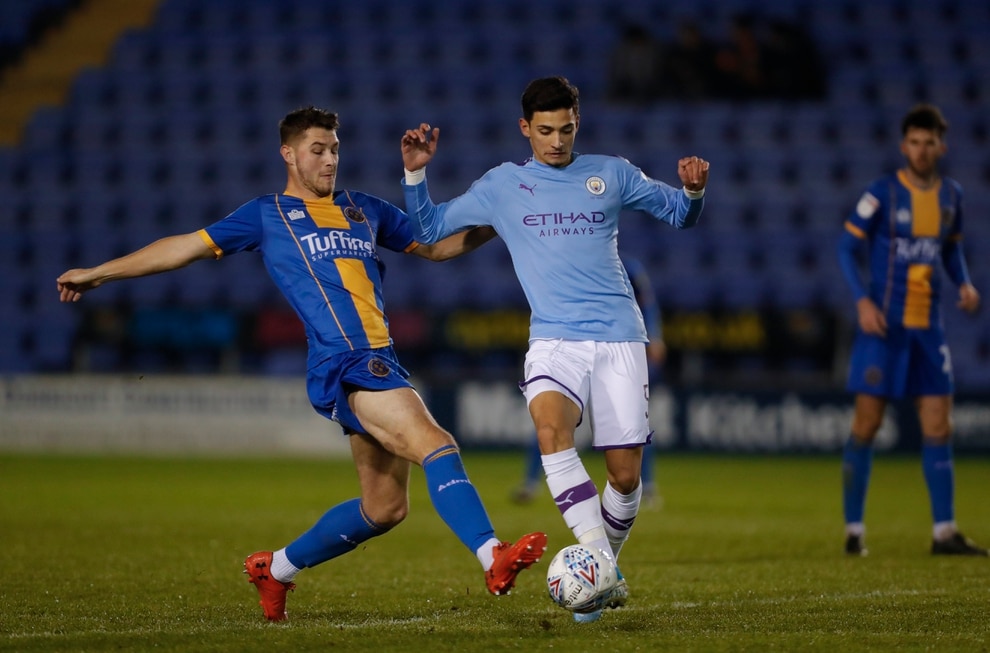 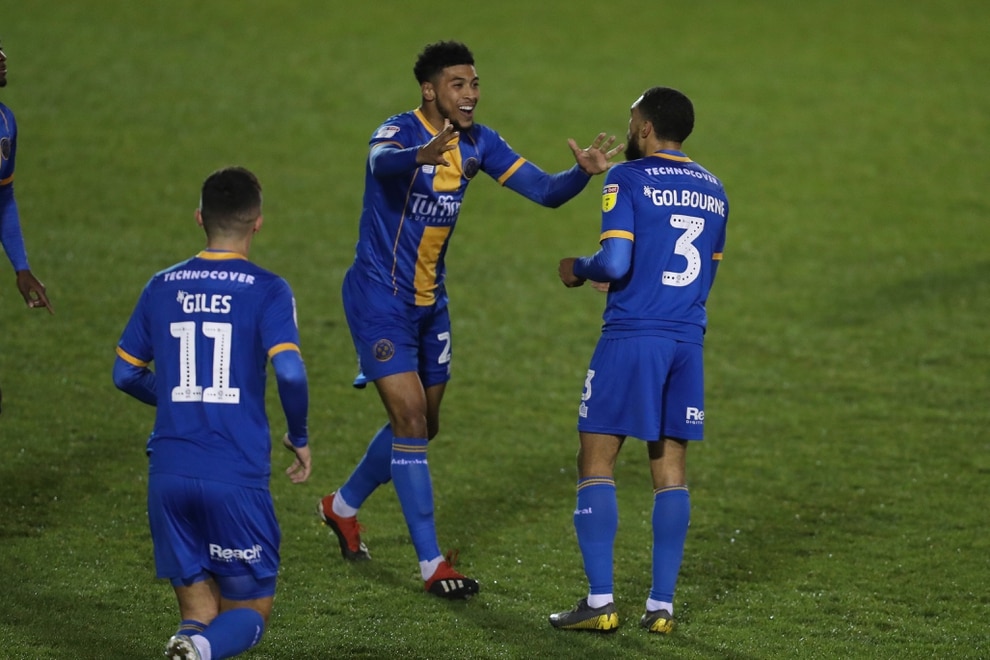 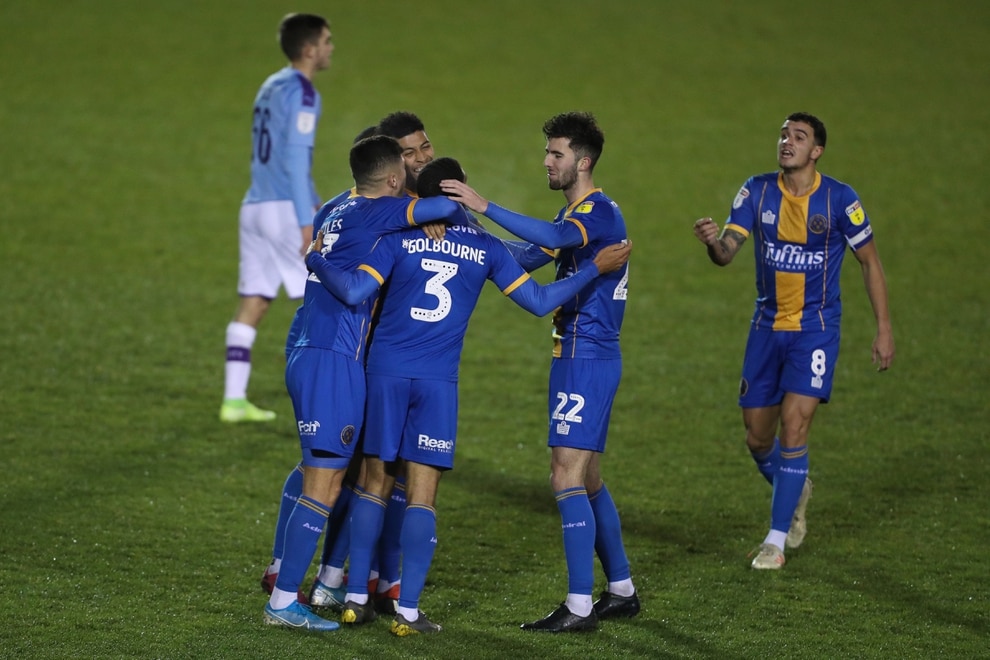 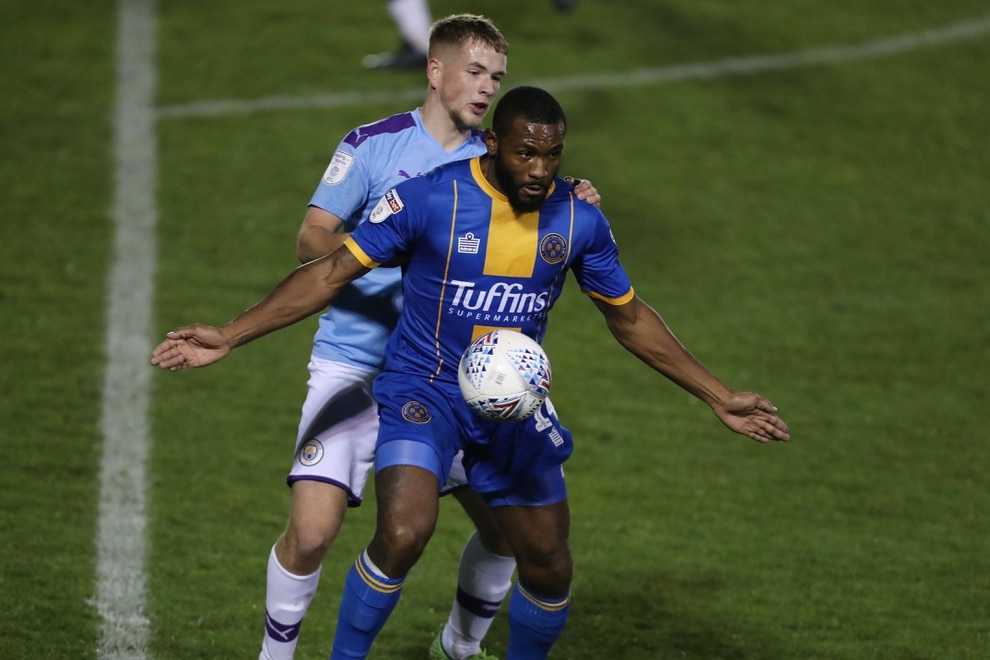 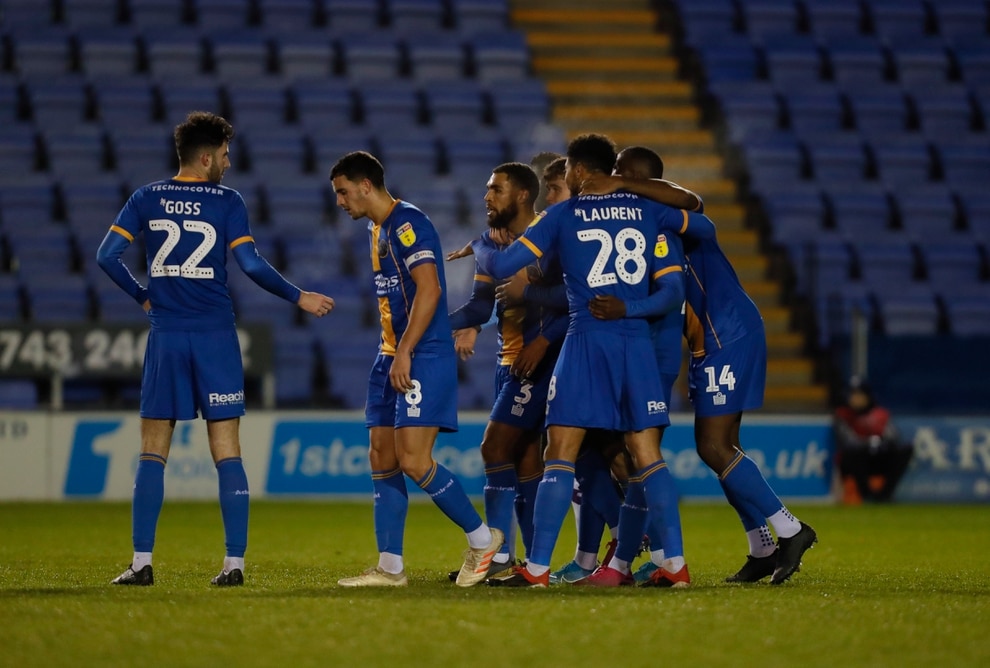 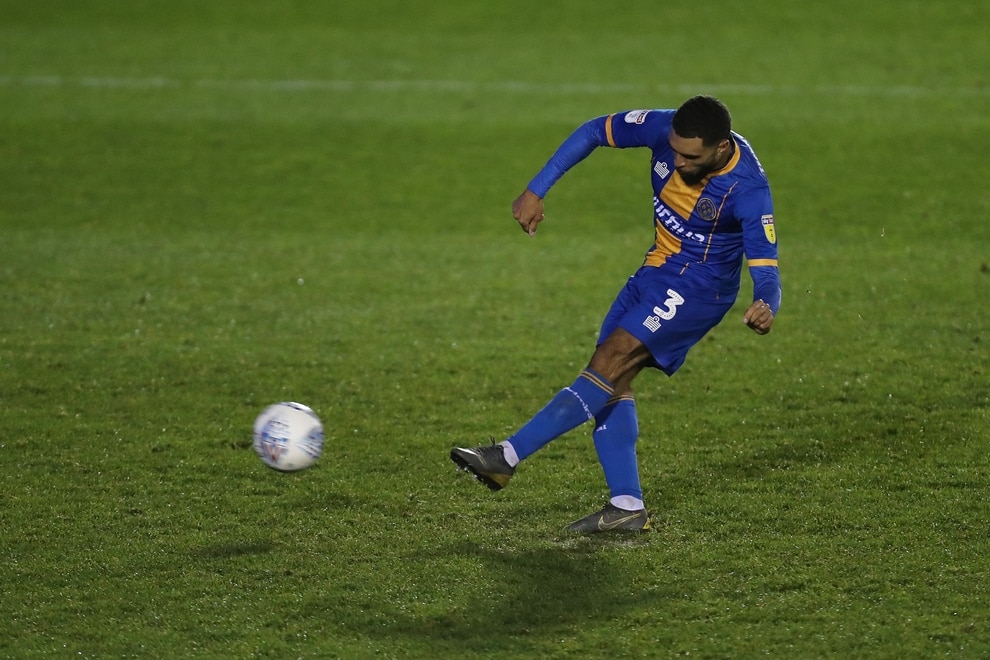 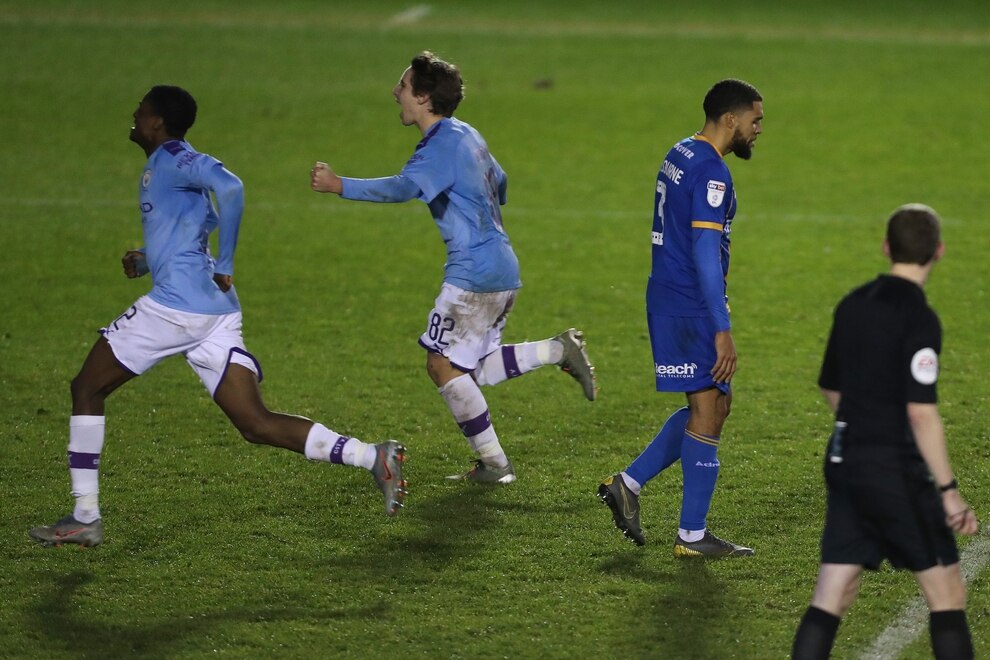 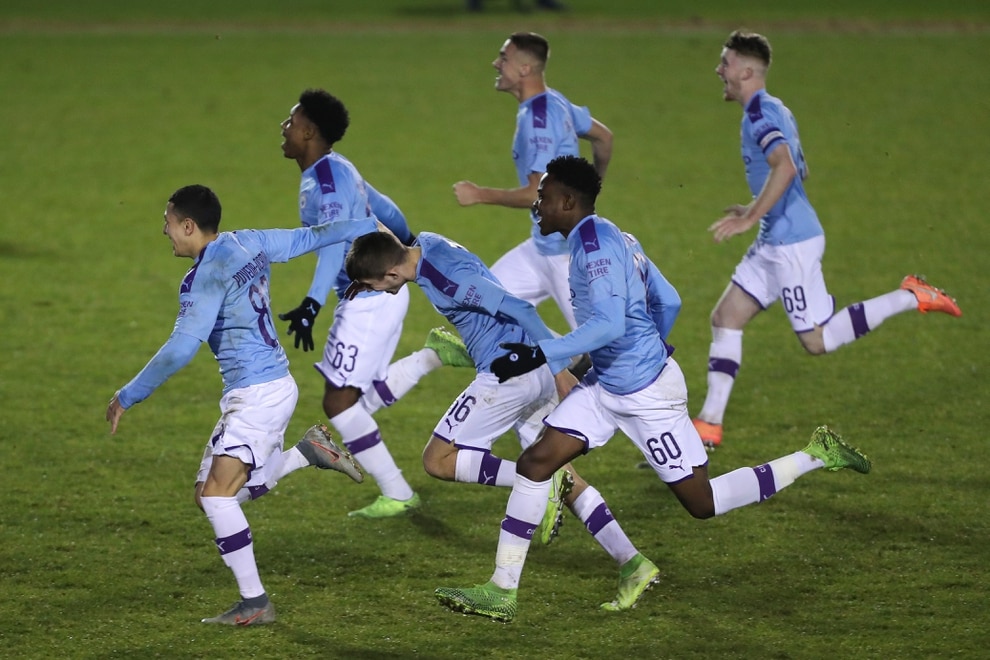 Scott Golbourne had put Town ahead with a rocket in the first half, his first goal for the club, but missed the decisive penalty after City deservedly levelled in the second period.

City skipper Tommy Doyle brought the young visitors level in a second half dominated by the Citizens against a poor Salop.

Ricketts, celebrating 12 months in charge of Town, was hoping for a run in the competition he won as a player with Swansea but it was not to be for Town.

The opener was Golbourne’s first goal in more than six years, where he struck for Wolves at Oldham in the FA Cup on November 9, 2013.

Ricketts and Dave Edwards were team-mates that day but Golbourne, 31, is unlikely to have struck a ball sweeter in his long career.

Town sprung a surprise just moments before the team news was revealed as it was announced combative French midfielder Ousmane Fane had joined on a free transfer.

Fane, formerly of Kidderminster and Oldham, took his place on the bench, while Town were captained by fellow midfielder Ollie Norburn - whose suspension from Saturday’s red card was lifted after an independent FA panel granted Shrews’ appeal for a second week running.

Ricketts made six changes from the side that progressed beyond Mansfield to the FA Cup third round on Saturday.

John-Lewis made his first competitive start after 11 months out with an ACL injury.

Town noticeably lined up 4-4-2, a rarity under the stewardship of Ricketts.

An array of first-team experience yet again backed up Ricketts’ ambition in the competition.

The Shrews boss marked his one year in charge of Town with the knockout tie and was keen for a prolonged run in the competition.

The young Citizens, whose side consisted mostly of 17 and 18-year-olds, have struggled in Premier League 2 this season, where they find themselves second-bottom.

On a quiet night in front of just one stand at Montgomery Waters Meadow - aside from a pocket of Citizens in the away end - an open, watchable game broke out.

As expected the visitors, under head coach former Football League player Paul Harsley, were extremely happy to play the ball between themselves, trusting their ability to play it out from the back.

Lined up in Pep Guardiola’s 4-3-3 style, they threatened first through skipper Doyle, whose acrobatic volley was turned around the post by O’Leary.

Giles was busy down the left flank for the hosts and lofted in an accurate cross nodded just over by John-Lewis.

City were just about edging possession but Shrewsbury were letting fly from all angles, Giles drawing a sprawling save from Daniel Grimshaw from all of 30 yards.

England under-20 international Ian Carlo Poveda stabbed a great chance wide of the far post for Manchester City inside 20 minutes.

Shrews were working hard to make life difficult for City and keeping it reasonably well themselves. Town were particularly lively down the left and John-Lewis headed wide of the post.

It was another left-sided source, Golbourne, who broke the deadlock 24 minutes in - and in some style.

Few would’ve predicted what was to come as the left-back unwinded his leg from 25 yards but, slightly from the left, the ball arrowed into the opposite top right corner.

It was a stunning way to end a huge wait for a goal.

John-Lewis then, at the third attempt, headed on target at Grimshaw before O’Leary closed the half with a fine save at his right corner from Doyle’s free-kick.

City began the second half with a little more purpose, attempting to make inroads on the Town penalty area but Shrewsbury dealt with balls into the box well.

Walker, playing at centre-half with Beckles, stung the midriff of Grimshaw with a trademark 30-yard free-kick before ex-Barcelona youngster Bernabe headed over.

Town found it tough to get going after the break and were inviting pressure. Golbourne conceded a cheap free-kick by bundling over Poveda and impressive skipper Doyle gave O’Leary no chance with a curling free-kick inside the near post.

Shrewsbury continued losing the ball with sloppy passes, leaving supporters and Ricketts unimpressed. The boss brought on Fejiri Okenabirhie and Luke McCormick in an attempt to get a grip on the action.

But it was City sub Keke Simmonds who might’ve won it but shot across goal from inside the box.

The visitors looked the more likely in the final moments and hammered on Town’s door with O’Leary saving well from Simmonds, to send the tie to spot-kicks where City deservedly prevailed.