Shrewsbury and Bradford will do battle at Valley Parade for a place in the FA Cup second round after nothing could separate the sides at a chilly Montgomery Waters Meadow. 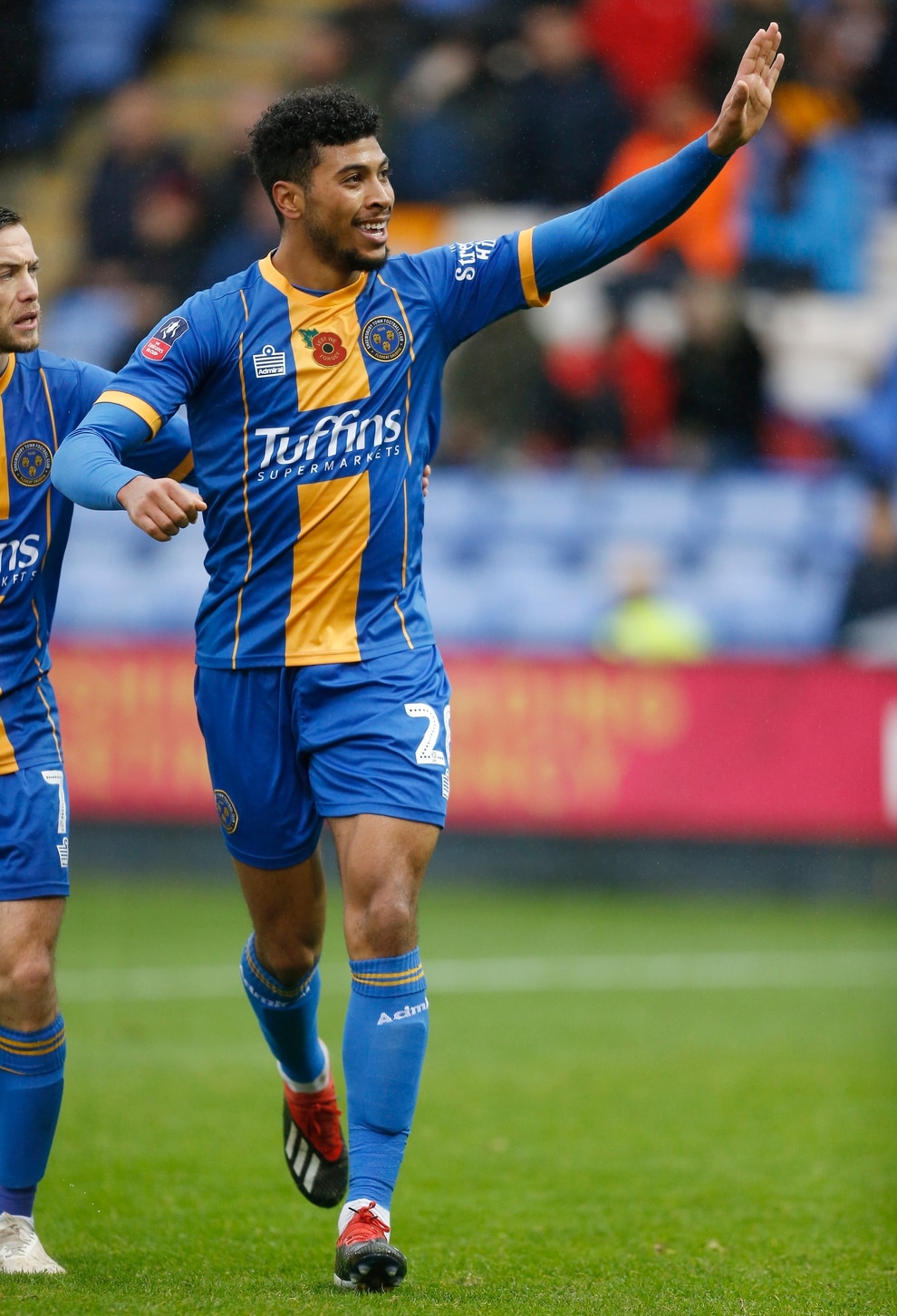 Josh Laurent of Shrewsbury Town celebrates after scoring a goal to make it 1-1. (AMA) 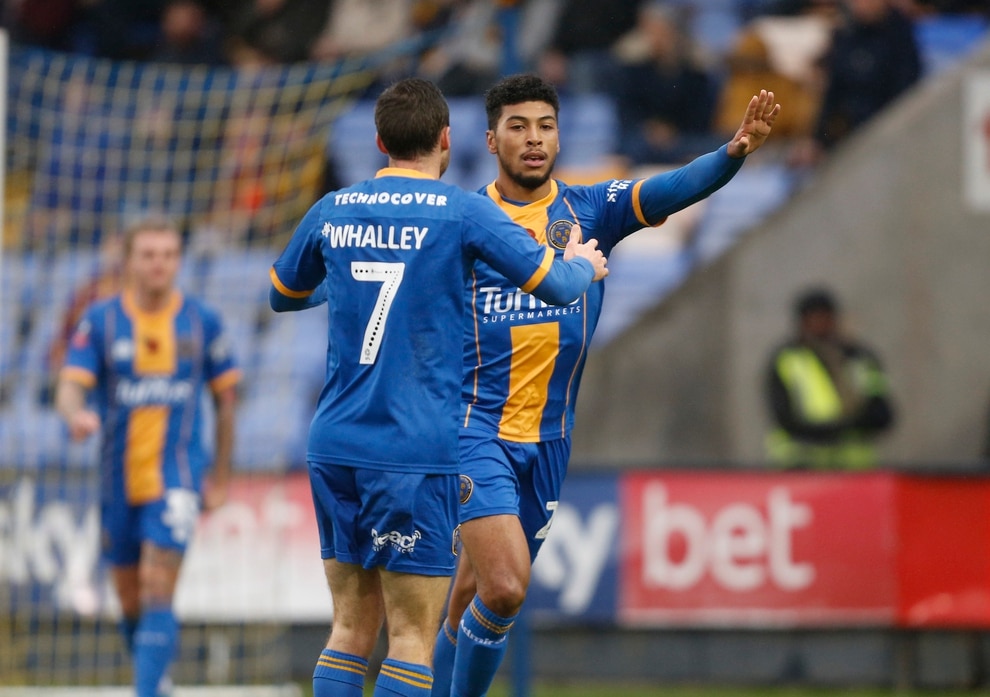 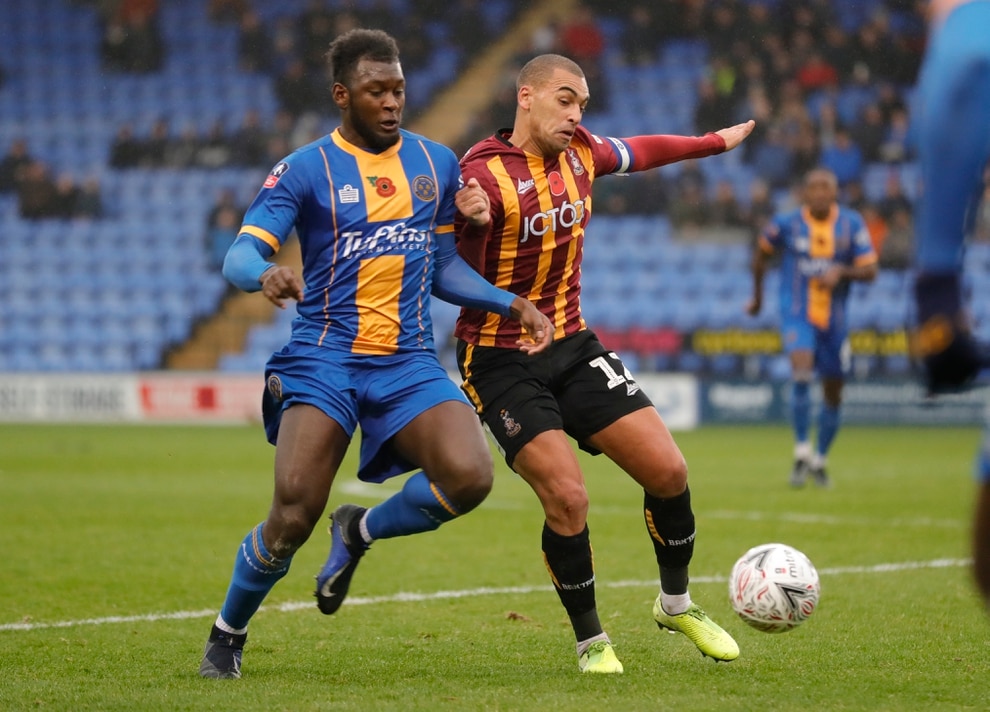 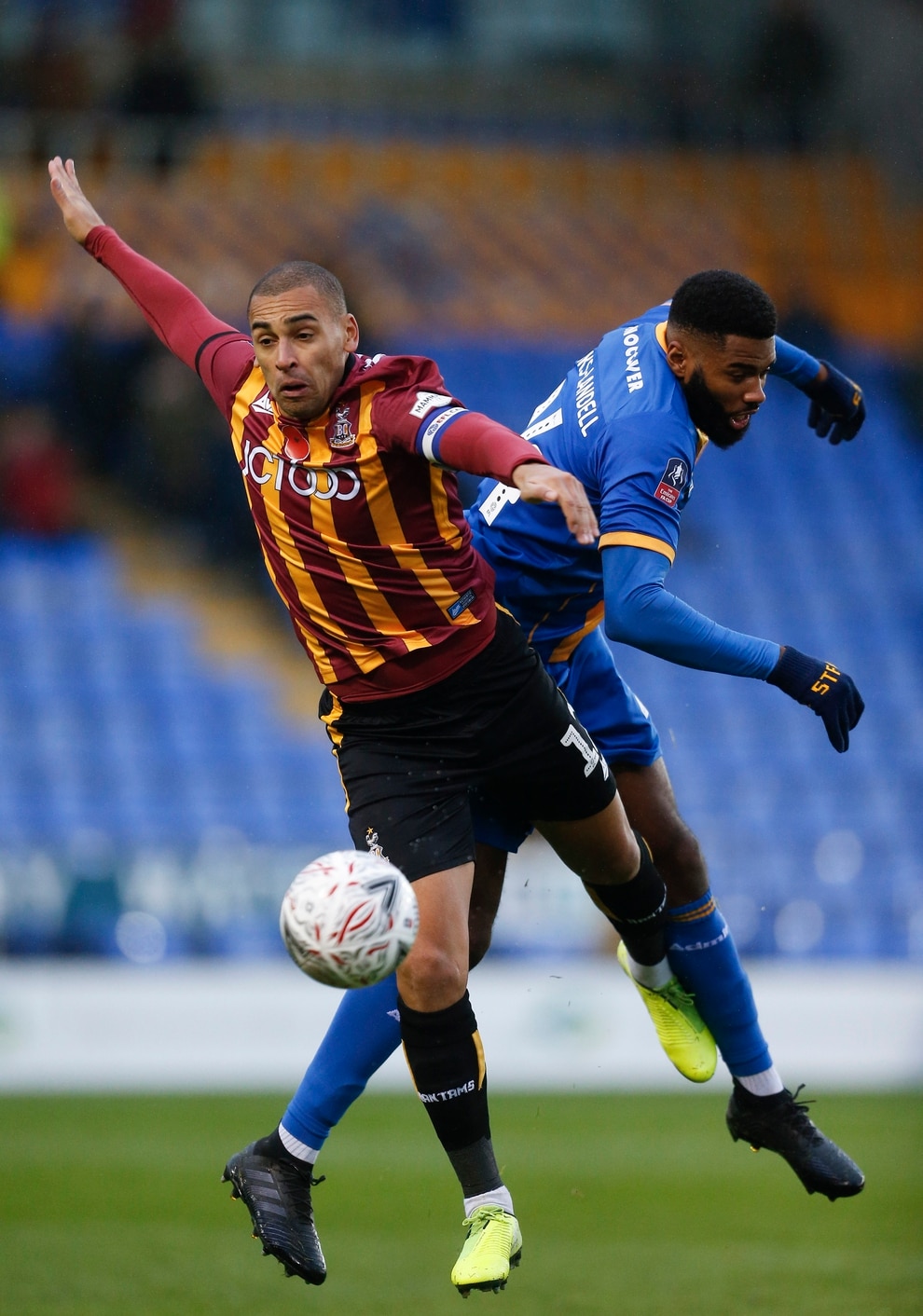 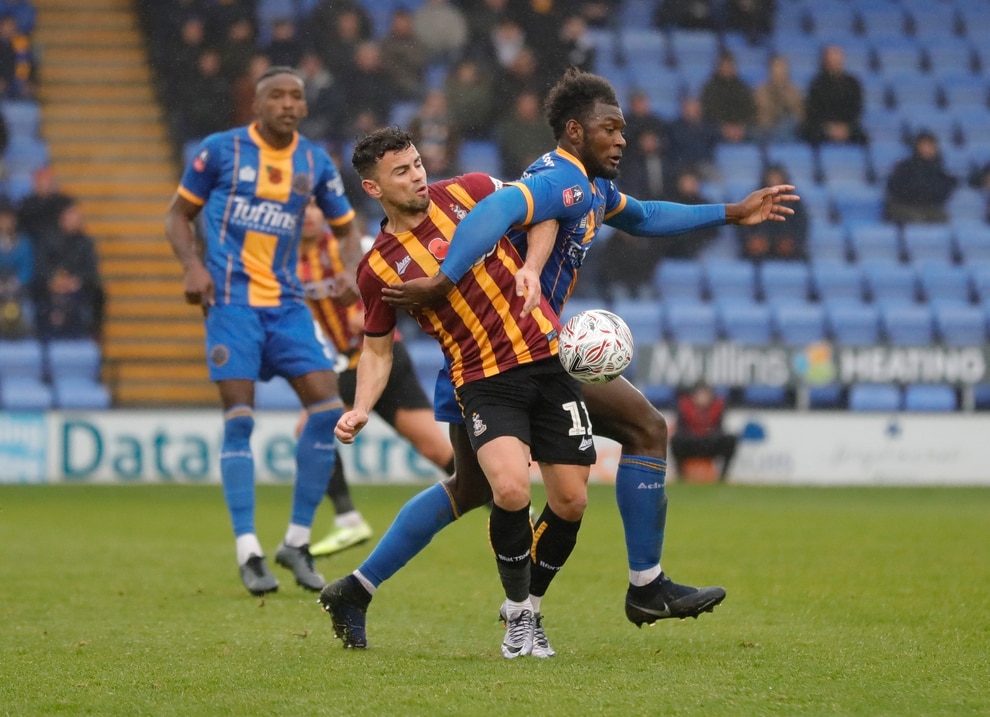 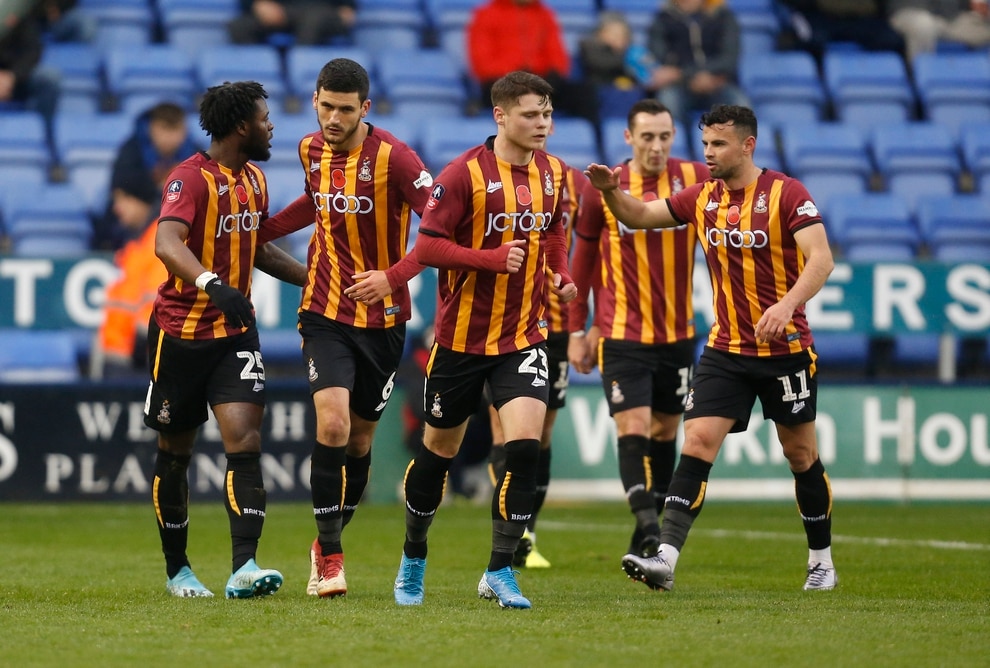 Aramide Oteh of Bradford City celebrates with his team mates after scoring a goal to make it 0-1. (AMA)

The League Two visitors took the lead on 19 minutes as Aramide Oteh capatilised on a rare Aaron Pierre error.

But Sam Ricketts’ men were level 10 minutes later as midfielder Josh Laurent helped himself to a first goal of the season with another FA Cup strike to add to his collection.

Just as John Askey had led Town to a first round replay with Salford this time last year - a result that ultimately cost Askey his job - Town will visit West Yorkshire for a replay, which could take place Tuesday, November 19.

There was no lack of effort and spirit after half-time in freezing conditions but neither side quite mustered the quality to find a winner.

The Bantams came closest through powerful defender Ben Richards-Everton who headed against the post after Dylan Connolly had prodded a good chance wide.

Town came closest through subs Fejiri Okenabirhie and Dave Edwards. The home supporters never stopped willing their side on but a stalemate was the outcome.

Ricketts and his squad created some fond memories in the world’s oldest football competition last season.

Those replay successes at Stoke City and Wolves in rounds three and four will be looked back on with fondness for some years to come.

Ollie Norburn spoke in the week about how those nights still resonate with the Shrewsbury squad that were here last term.

And Shrewsbury were hoping to marry their good start to the League One campaign with more progression.

The Shrews boss signalled his intentions in the competition by making just one chance from the side that impressively saw off Peterborough at home in midweek.

Sean Goss returned to the line-up for Dave Edwards in midfield, a switch that pushed Laurent into Edwards’ more advanced supporting role off Jason Cummings.

Gary Bowyer’s Bantams had enjoyed a fine start to the League Two campaign after last season’s disappointing relegation. The Valley Parade side have started with nine wins from 16 in the fourth tier.

One of the clubs’ impressive FA Cup records had to give in this first round tie. Shrews had no exited at this since 2013/14 against Walsall, while City had only been beaten at this stage once in five years.

Bradford also named a strong side in the grim and drizzly Meadow conditions. They were missing key frontman Clayton Donaldson to injury as when as midfielder Callum Cooke to suspension.

The visitors made light work of the 13 spaces and one division between the clubs in the pyramid. They caught their hosts cold and could’ve led inside 30 seconds had skipper James Vaughan connected with Connolly’s enticing cross.

Irishman Connolly looked lively down Bradford’s left as Town struggled to get going.

Town did manage a couple of breaks into the Bantams’ third, mostly thanks to some front-foot play by Laurent, but Shaun Whalley saw a couple of efforts blocked before Cummings shot at Richard O’Donnell from distance.

Ethan Ebanks-Landell should have added to his goal against Peterborough last time out but failed to get hold of either bite at the cherry from a Scott Golbourne corner.

Bradford were fair value for their lead inside 20 minutes as a poor Salop error gift-wrapped them the lead a long time before Christmas presents should be allowed.

A nothing long ball was flicked on by Vaughan with little threat apparent as Aaron Pierre rushed to guide a ball back to keeper Joe Murphy.

But Pierre totally lost his bearings and made a hash of the simple header and in nipped pacy attacker Oteh to lift the loose ball over Murphy and finish into an unguarded net.

The opener did not deter the noisy home fans in the South Stand but woke up the 300 travelling supporters from West Yorkshire.

Ricketts’ side had been made to pay for their sluggish start and realised after falling behind they needed to improve.

Skipper Norburn was trying to get his side going and Whalley was, as usual, eager to be a menace but Shrewsbury found it difficult to string passes together with Cummigns isolated.

Anything good the home side had managed came through the purposeful Laurent and it was the midfielder who hauled below-par Town level just before half hour.

Shrews worked a neat move out to the right side for Whalley, who looped up a measured cross to the back post, where Scott Golbourne was the extra man having crept into the box.

Golbourne had time and space and used it well, nodding a cleaver header across the box for Laurent to sweep in his first goal of the season.

Ex-Wigan man Laurent looked in the mood and sent a 25-yard effort, via a slight deflection, inches wide of the top right angle.

Fellow midfield man Goss looked tidy on his return to the side, with neat touches and decent use of the ball keeping Town ticking.

A free-kick delivery from Goss was on the money but a scrum of Shrewsbury bodies could not turn home from close range. The midfielder than tested O’Donnell from distance with his weaker right foot.

Shrewsbury had the better of the final 15 minutes but Danny Devine get the hosts honest with a 25-yard half-volley well fielded by Murphy.

The veteran goalkeeper was far less convincing moments later as, shortly before half-time, he dropped a simple Connor Wood delivery at the feet of former Everton man Vaughan who somehow could not turn in a finish.

Shrewsbury started the second period much better than they had managed the first.

They were sharp and bright in forward positions. Cummings was inches away from converting a Donald Love cross after a clever dummy before two right-sided crosses almost picked out the busy Laurent as Town staged prolonged attacks.

But the visitors had a massive chance to lead again 10 minutes after the break. Nice touches from Oteh and Vaughan released Connelly, who had the speed to get away from the Shrews defence but could only toe-poke wide when met well by the aware Murphy.

Bradford chief Bowyer rolled the dice, sending on Kelvin Mellor and Jermaine Anderson for Vaughan and Zeli Ismail, while Ricketts brought Cummings off for Okenabirhie before the hour.

The tie flowed one way and the other with neither side managing a continued spell of pressure.

Town keeper Murphy got lost under a corner but neither Hope Akpan or Connolly could punish Shrews. At the other end Norburn shot low and just wide of the near post from outside the area.

As a cold afternoon’s action entered its final quarter it was apparent a moment of magic was needed to spark the action into life.

Shrewsbury’s safe standing supporters, in the South Stand, cannot be accused of not providing an atmosphere. The pocket of fans spent most of the second period bouncing up and down to a song in honour of sub Okenabirhie.

The striker, who netted a Valley Parade hat-trick in the eventful 4-3 league defeat last season, helped a decent chance over from Love’s cut-back.

But Bradford were sniffing an upset and came within inches of edging ahead as big defender Richards-Everton found the post after stooping to connect to a difficult header.

Shrewsbury screamed for a penalty as Whalley was decked by a Richards-Everton tackle after Pierre’s marauding run but referee Sam Purkiss waved action on.

Applause from the home fans greeted Ryan Giles’ return from injury as he replaced Golbourne for the final 10 minutes.

And the on-loan Wolves men lifted in a delicate cross, well helped on by Whalley at the near post, only for the sliding Edwards to miss by fractions at the back post.

There was to be no final telling moment for either side as the winner proved elusive, with a replay to add into Town’s agenda in the coming week or two.

Shrewsbury need to get tough to nail the Hammers – Jimmy Lindsay