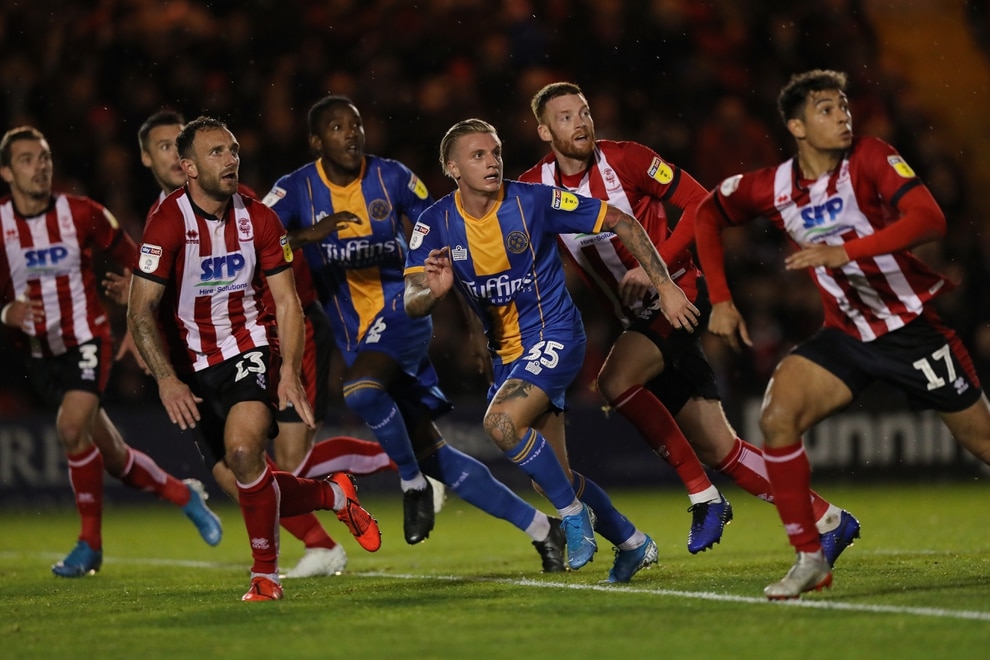 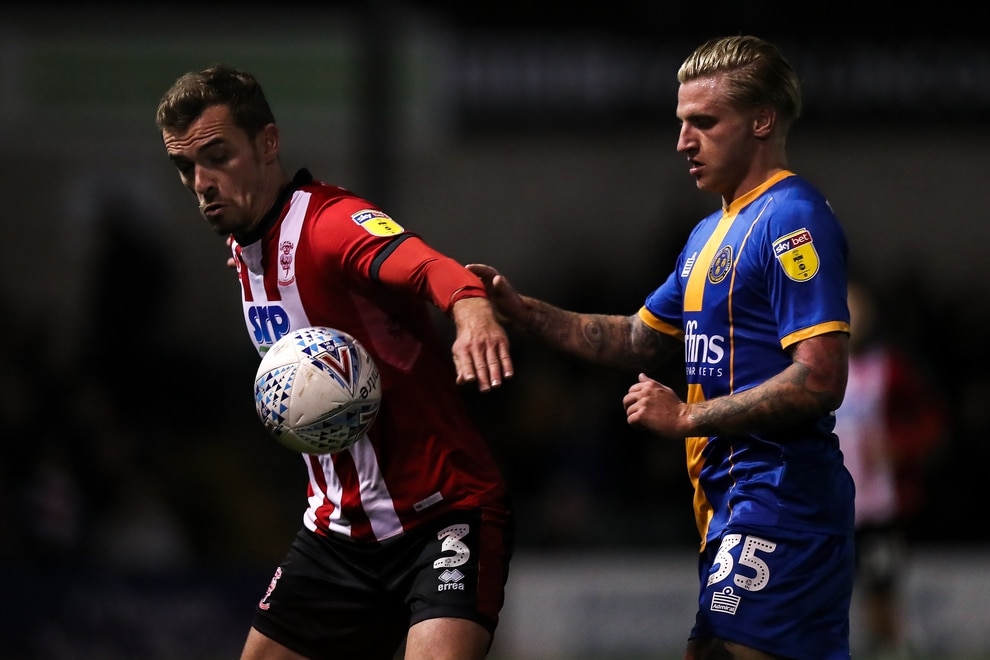 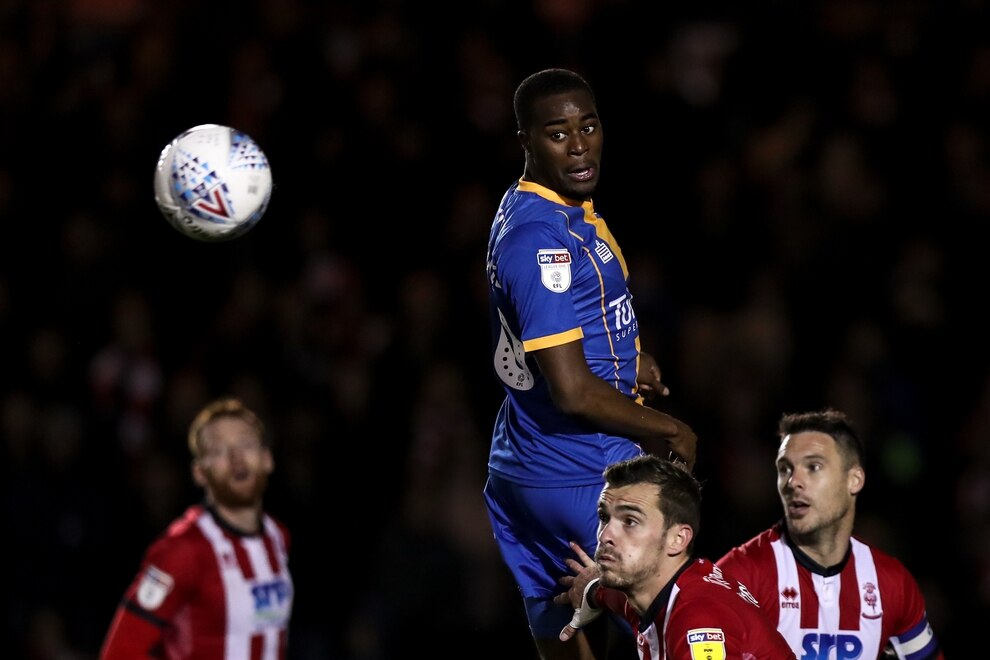 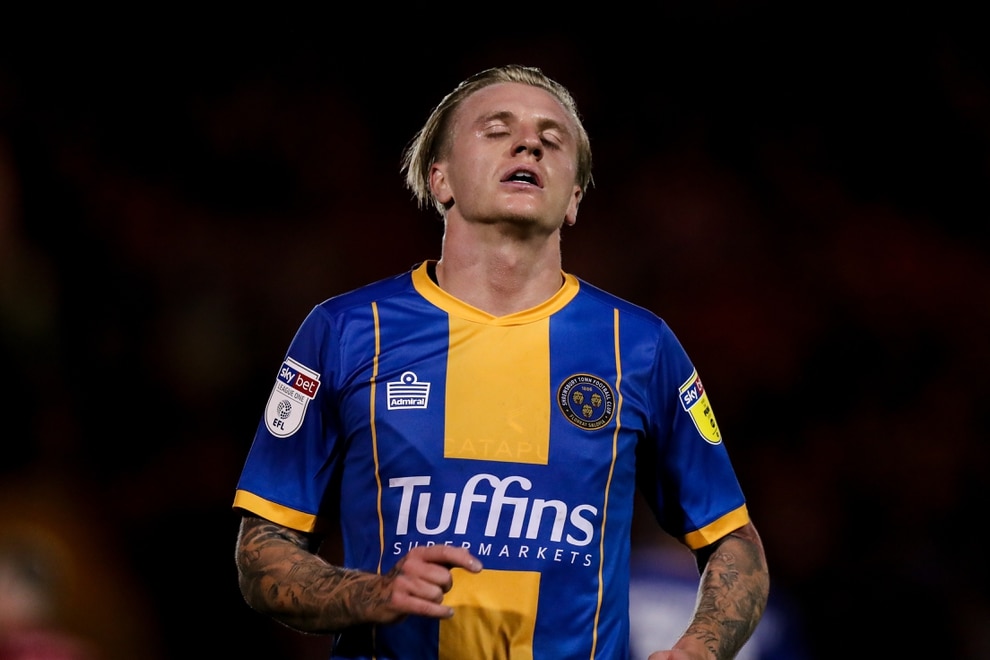 The hosts played the final 10 minutes a man down after centre-half Cian Bolger was shown a controversial straight red for his challenge on sub Shaun Whalley.

Sam Ricketts’ men were typically solid at the back as Max O’Leary’s only save came in the 78th minute.

But Town did not do enough in front of goal to make it back-to-back League One and only looked like scoring from distance.

They lifted one place to 12th from the stalemate under the lights that will not live long in the memory.

Town supporters have had to wait 13 days to see their team in action due to the international break.

And the 1-0 victory at Tranmere a fortnight ago had provided encouragement for Town fans as another clean sheet was secured and Ricketts’ men looked a more creative force in attack.

Shrews’ defensive pairing Omar Beckles and Aaron Pierre made it back from the Caribbean unscathed and were straight back into the side. The two changes from Prenton Park were up front, where Fejiri Okenabirhie and Jason Cummings came in for Callum Lang and Daniel Udoh.

Town had been left reeling by the news that Lang will be missing for three months after metatarsal surgery.

They are another striker down as news broke earlier in the day that veteran forward Steve Morison, who was struggling for involvement, had called time on his playing career.

Hosts Lincoln, having enjoyed recent promotions from the National League to League One, are settling into League One life having suffered the body blow of losing Danny and Nicky Cowley to Championship Huddersfield last month.

But they began the one place above Town, on goal difference, having played twice more.

Former Oxford boss Michael Appleton had begun his tenure at Sincil Bank with one victory and three defeats.

The heaving rain around kick-off did little to dampen the spirits of the few hundred Salopians in Lincolnshire.

Goalmouth action was in short supply in the opening stages. Bruno Andrade had the game’s first effort 10 minutes in after cutting inside from the left but it was comfortably over.

The Imps were edging possession but Shrews were looking rigid and compact as the back three became a five out of possession.

Sean Goss saw a lot of the ball in midfield for the visitors, who were operating on the counter attack, looking for early passes to Cummings and Okenabirhie.

Town’s defence held an inquiry as to who lost their man as winger Jorge Grant nodded wide unchallenged from the penalty spot for the game’s best chance 20 minutes in.

The home side began to ask more questions of Shrewsbury. They escaped through the right of Town’s box as Jack Payne found the side netting but the offside flag had been raised. Midfielder Michael O’Connor had fired narrowly over from distance.

But the Imps lost their way on half hour as the sloppiness became contagious. A slip from midfielder Joe Morrell should have been punished. Cummings collected it on the edge of the box but dallied and opted to pick out Okenabirhie, who slipped as he shot. It was a big let off for the hosts.

The Lincoln fans grew tired of their side’s wastefulness but Shrews were offering little better. Salop were, however, in the ascendency before half-time and knitted a couple of decent balls together - one of which saw Josh Laurent denied by fine Morrell defending.

A forgettable first half ended with Cummings fizzing over a rocket shot from distance out to the left. It zipped just over the top left angle and was by some way the visitors’ best effort of the half.

It was quickly apparent Appleton had told his charges to liven the pace up for the second half. It did little to improve the number of chances. Dangerman Tyler Walker did find some room from a tight left ankle but skewed well off target.

Goss showed his quality with a stunning 35-yard swerving free-kick that forced Josh Vickers into an unconvincing save.

Shrewsbury were showing their defensive strength, with Pierre looking in superb shape, closing the door on every Lincoln attack.

Town had edged the second period. Ryan Giles was purposeful down the left and Goss was dictating the ball. Ricketts shuffled his pack again with 20 minutes left, sending on Shaun Whalley for Okenabirhie.

Lincoln finally had a shot on target with 12 minutes remaining. Sub John Akinde was released down the left and tested Max O’Leary low down at the far corner. The keeper was equal to it and Walker was offside from the rebound.

The real drama unfolded in the 80th minute as Bolger was shown a straight red card for a forceful challenge on Whalley on the left flank. Imps fans, some six foot from the incident, were furious at the decision, with stewards holding them back.

The chant ‘cheat’ was aimed at Whalley. Town had all of the ball but - despite a couple of Norburn efforts from distance and Donald Love’s blocked effort - could find no way through.