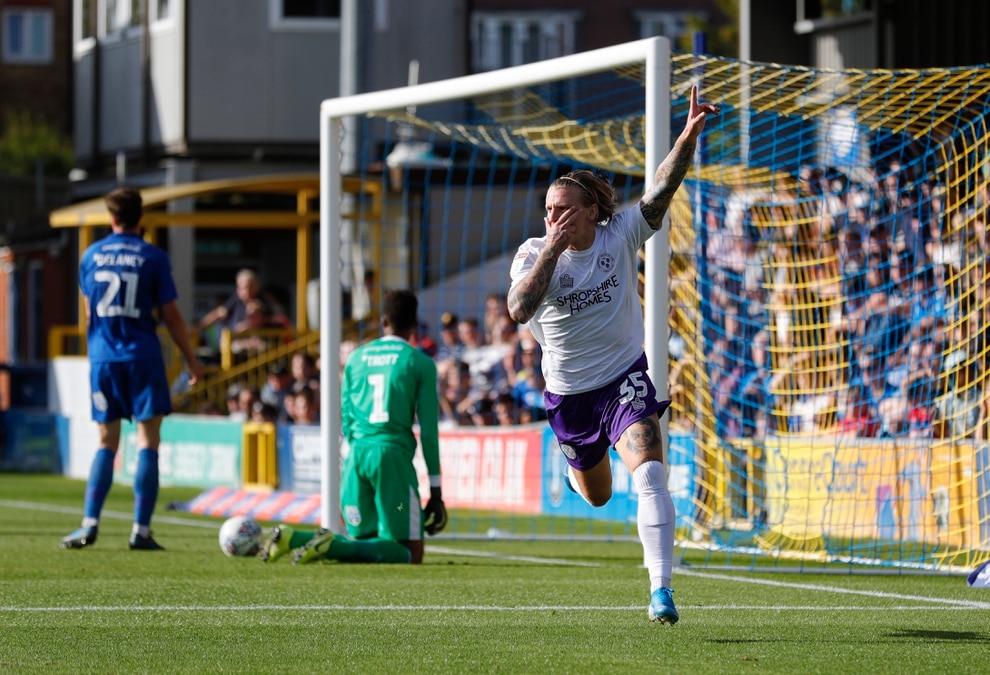 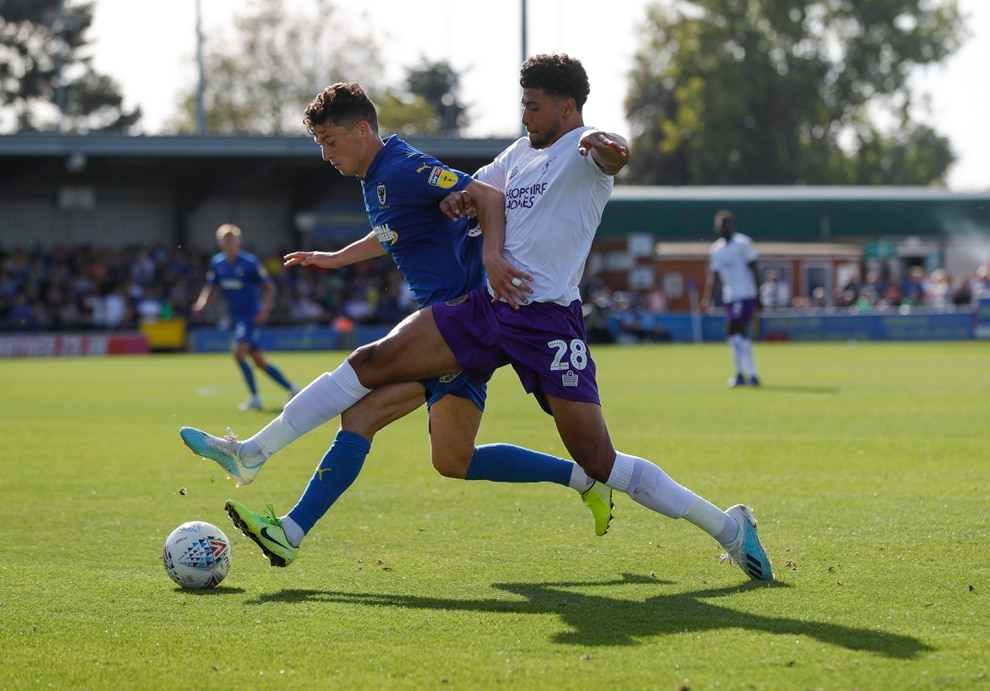 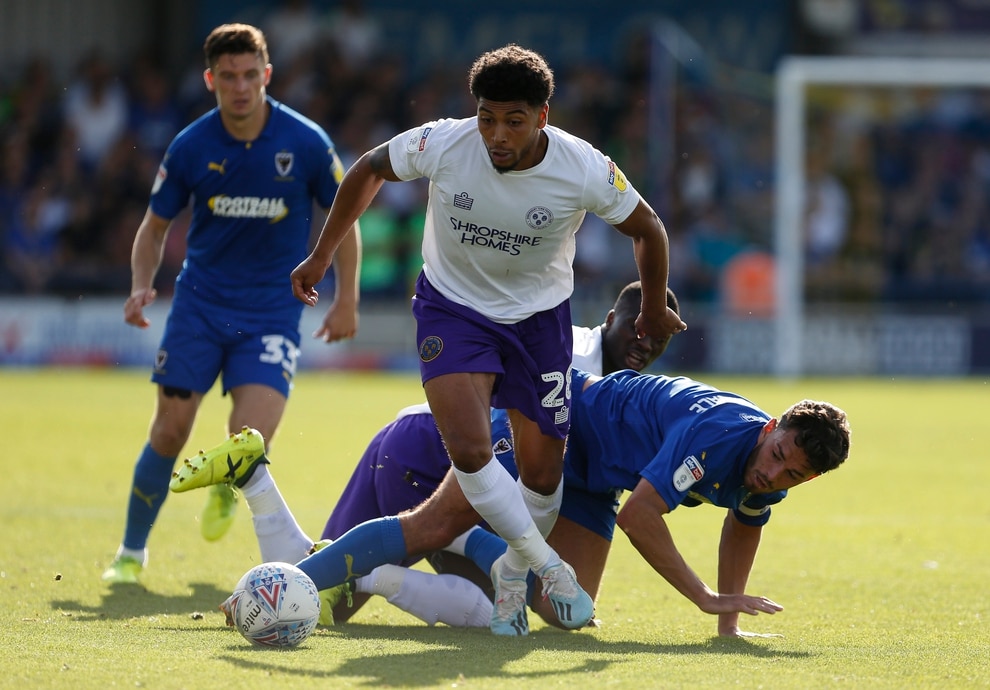 Josh Laurent of Shrewsbury Town and Will Nightingale of AFC Wimbledon. (AMA) Callum Lang of Shrewsbury Town is brought down by Ryan Delaney of AFC Wimbledon. (AMA) 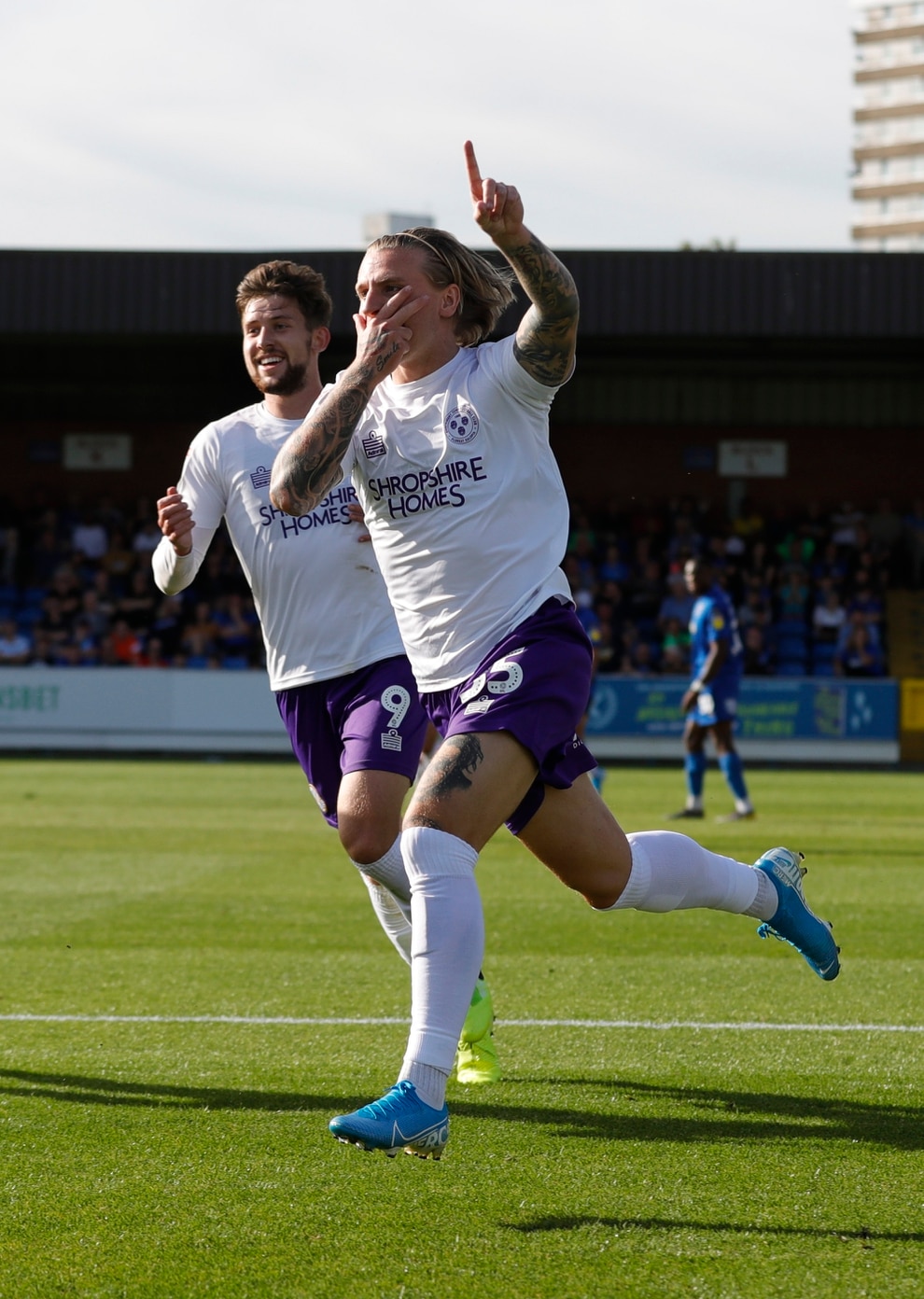 Jason Cummings of Shrewsbury Town celebrates after scoring a goal to make it 1-1. (AMA) 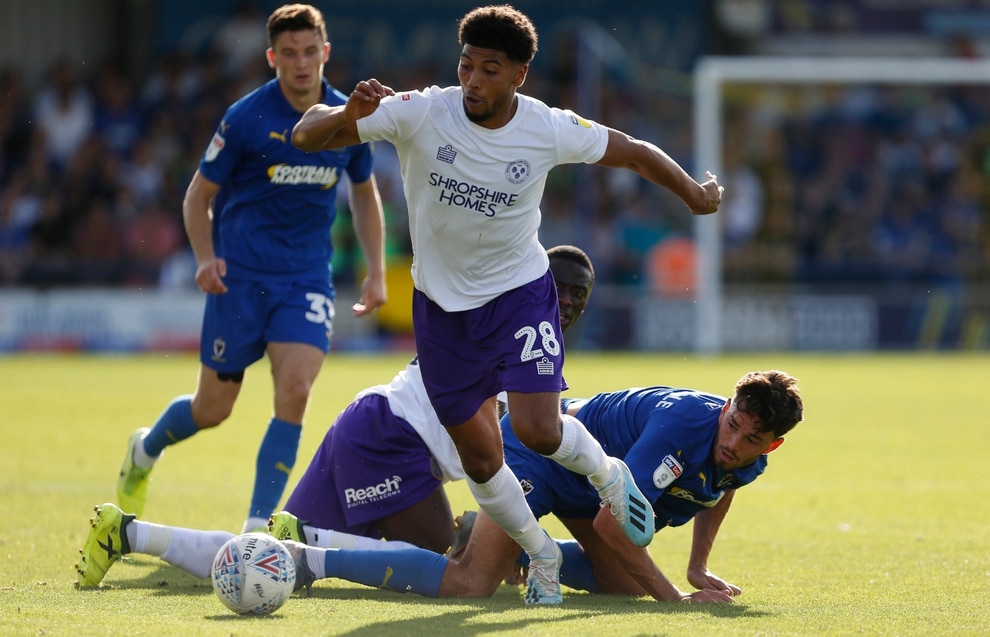 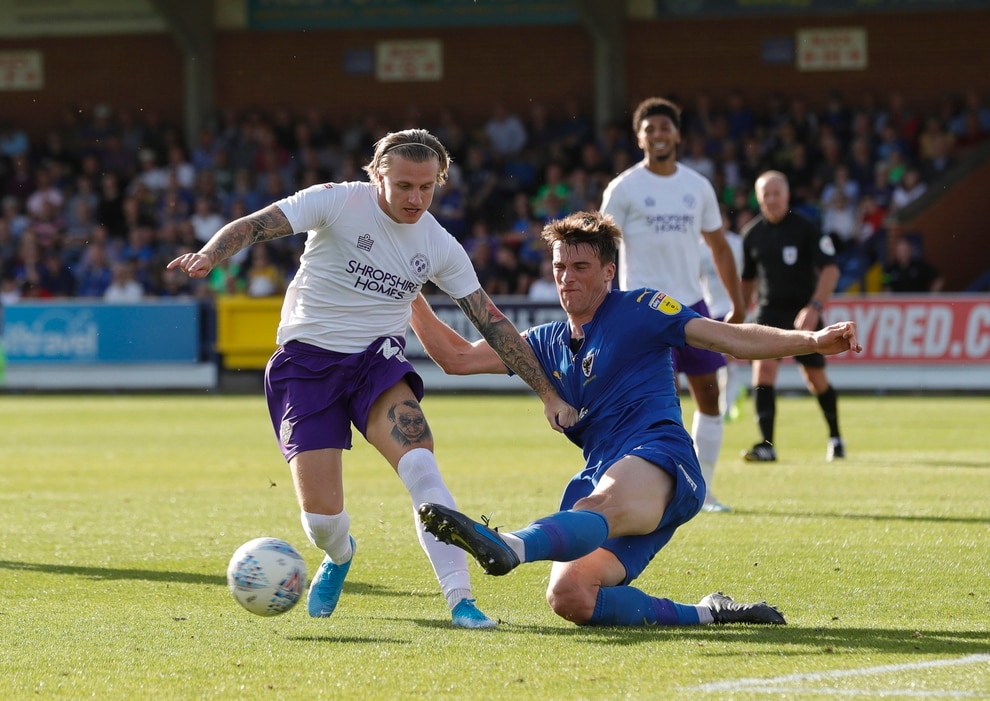 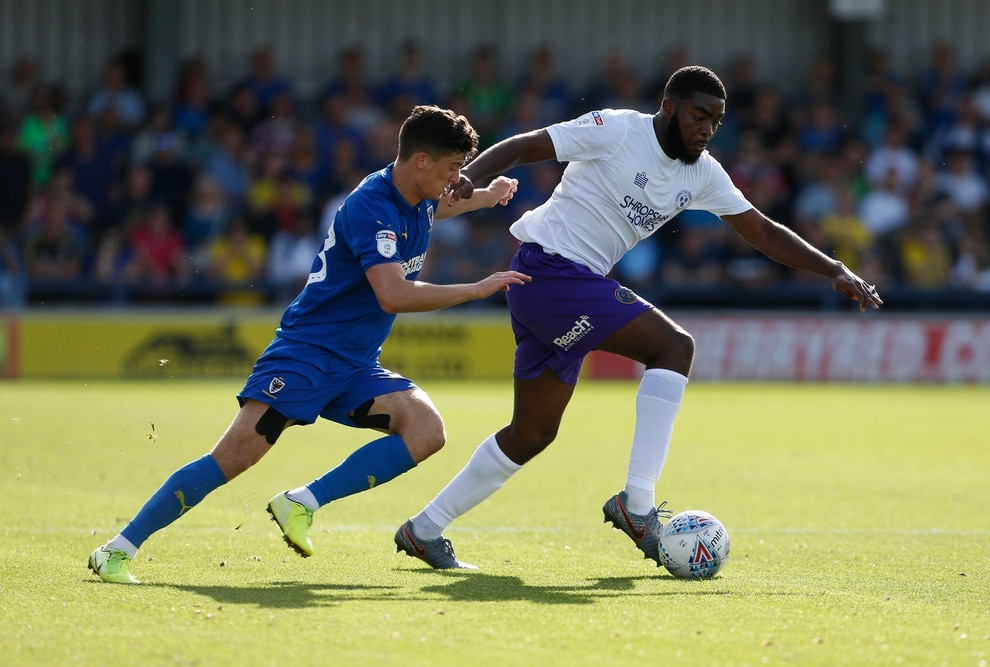 The hosts looked set for their first win in eight league attempts after Ethan Ebanks-Landell’s first-half own goal.

Sam Ricketts’ men were well below par before the break but improved vastly after half-time and should have won it in the end with numerous presentable chances.

Cummings, sent on to join fellow debutant Callum Lang midway through the second half, finished superbly from Ryan Giles’ cushioned cross to spark wild scenes in the away end.

The deadline day signing from Nottingham Forest may have earned an instant cult status with the fans in south west London after his cool finish, showing all the signs of an experienced goalscorer.

The 24-year-old Scotland international, who had no pre-season with former club Forest, wasted little time to introduce himself to the 429 away fans behind the dugout.

He will have been disappointed not to convert a one-on-one even later before Josh Laurent spurned Shrews' clearest chance in a clash that really livened up inside the last five minutes.

More good news for the visitors was 79 minutes in the tank for returning captain Ollie Norburn, while Ro-Shaun Williams, also back from injury, completed the full game.

Shrewsbury fans were delighted to see the returning names of Norburn and Williams as the team news came through an hour before kick-off.

Norburn, who wore the captain’s armband, had not played competitive football since the end of last season after the knee injury sustained in July in Portugal.

He returned for Dave Edwards who had not travelled to London. The Welshman was ‘not 100 per cent’, said Shrewsbury, with his ankle - which received surgery in the summer - still showing signs of swelling after matches.

Williams, who injured his hamstring in the second game of the season at MK Dons, came back in for Omar Beckles, who could class himself unfortunate to miss out after performing well for Salop and Grenada during the international break. Aaron Pierre and Ryan Giles, also back from international duty, returned to the XI.

One of Town’s two new deadline day signings made their debuts at Kingsmeadow. As expected it was Wigan loanee Lang in from the off, while Cummings made to for a place on the bench.

He joined Steve Morison among the subs, the experienced striker sitting out for an unlikely full league debut for Daniel Udoh - the summer signing from AFC Telford United - making his first League One start.

Shaun Whalley was missing serving his one-game suspension while Fejiri Okenabirhie was unavailable with a hamstring problem.

Ricketts’ men, all in their changed white away shirts and purple shorts, faced an interesting tactical battle, with both sides lining up 3-5-2.

There felt an expectancy among the home fans despite seeing their side go winless in seven league games to start the season. The Dons had pushed big-hitters Ipswich, Sunderland and Rotherham close and drew with leaders Wycombe.

Ricketts knew their record made the hosts no pushovers.

The Shrewsbury manager, dressed in a crisp white shirt, would have been delighted to see his returning defender Williams carry out the overlapping centre-back demands within the first minute.

He drove forward to the right byline and a low cross was put behind for a corner. From that Sean Goss delivery, an AFC Wimbledon header inadvertently flew goalwards before it was cleared off the line by another blue shirt.

Having impressed in the opening minute, Williams’ poor backwards header towards his own goal let big striker Joe Pigott in on goal but keeper Max O’Leary forced him wide and Ebanks-Landell defended well.

Despite Shrews’ very early flurry the Dons looked the better side inside the first 15 or 20 minutes. They combined well in areas and Town looked, at times, wobbly on the ball.

Wally Downes’ men weren’t afraid to send it long and the aerial presence of Pigott was causing problems.

On-loan Brentford striker Marcus Forss was lively too. He dragged a short wide from outside the Shrewsbury box. Town’s only positions of danger were balls into the Dons box mostly claimed by Nathan Trott.

Town improved as 20 minutes came and went. Norburn and Laurent were making decent runs into the inside channels and sending in dangerous cross. The Dons defended well. One Lang header from a corner was blocked before Laurent, who was bizarrely unmarked six yards out, could not climb high enough.

A set-piece routine where skipper Will Nightingale headed on for Pigott showed what an organised outfit the so-far winless hosts were. Though O’Leary made a routine save.

A few minutes later O’Leary was flying through the sky to make a spectacular flying stop to deny defender Paul Kalambayi’s 25-yard rocket.

Though unfortunately for the visitors, on-loan Bristol City man O’Leary could do nothing from the resulting corner.

A superb Anthony Hartigan delivery, one of several, caused all kinds of panic and the ball flew in before Town’s keeper could react. Initially Pigott was at the front of celebrations but the wicked corner was judged to fly in off Ebanks-Landell.

The dead ball theme continued for the remainder of the first period as Ricketts’ men, somehow, only went in one-goal down.

AFC Wimbledon remarkably managed to turn the ball wide from three yards out despite having three attackers free in the six-yard box.

Another corner caused an almighty scramble before the white shirts just about cleared.

Hartigan was causing all sorts of problems with his fine deliveries. Shrewsbury were being bullied in the area and Nightingale’s effort was brilliantly cleared off the line by Donald Love.

Town only tested loanee keeper Nathan Trott with a Norburn effort from distance. Most of their decent work was at arm’s length of the home defence.

Shrewsbury required another big second-half performance at Kingsmeadow, similar to that of last season, where Luke Waterfall’s double turned around a deficit in John Askey’s last league game in charge.

Salop’s subs, including attackers Cummings and Morison, were warmed up vigorously at the break.

But the Salop boss made no changes at half-time and stuck with the same XI that under-performed in the first period. Ricketts had some final words with midfielders Goss and Norburn before making his way to the dugout in front of the travelling fans.

Town were better after the break. They seemed more on the front foot and had a better energy about them.

Norburn was his usual energetic self in the middle of the park, a spark Shrews have been missing. His graft won a free-kick which was glanced wide via the head of Ebanks-Landell, who was looking to atone for his own-goal.

Shrews’ frustration was summed up by referee Graham Salisbury not playing an advantage when Ryan Giles and Udoh had an overlap on Town’s left.

The visitors were at least threatening attempts on goal in the second half.

Both efforts of note came from midfielder Goss, who curled over with his weaker right foot before a left-footed thunderbolt zipped six inches over.

As the second half reached its mid-point, Shrewsbury’s toil all seemed in vain. There was no lacking in energy or commitment but a struggle in ideas or creative spark.

Ricketts could see that and sent for his new striker as former Forest man Cummings replaced Udoh, who got a fair reception for his efforts.

Cummings showed what he was about within moments with a sharp left-footed strike from distance that stung the midriff of keeper Trott.

Lang buzzed around on his debut. He chased numerous lost causes and kept attacks alive with terrific energy on an eye-catching first appearance.

But within six minutes of coming on for his debut, the coup deadline day signing made his impact.

A lovely diagonal pass releases Giles’ perfectly timed run down the left. The on-loan Wolves man is free on the left of the box and squares the ball accurately for that man Cummings, who cushioned in his volley.

The away end were euphoric as they celebrated their efforts of the new goalscorer.

The wind was in Town’s sails but, despite looking far the stronger side, they couldn’t capitalise and make their period of pressure telling.

But Ricketts’ men still looked the more likely. And clear chances did come.

With six minutes remaining a brilliant interception and pass from Grenada skipper Pierre released Cummings in on goal with the chance of a magical second.

The Scotland international raced through on goal, with a defender making up ground to just launch a last-ditch block and divert the ball wide.

Cummings kept the entertainment levels high as his imaginative overhead kick from a corner was straight down Trott’s throat.

Out of nowhere the hosts found some gusto and became a threat again. The action became end-to-end in the frenetic final moments.

Morison was sent on as a late sub. His fizzed cross almost picked out Ebanks-Landell before Love sent a terrific hit just over from distance.

Dons came and applied pressure via overlaps and balls into the box but Shrewsbury defended manfully.

From a Wimbledon corner Town broke and had a massive chance to win it. On a three-versus-two break sub Brad Walker released the charging Laurent.

The midfielder was in through on goal, albeit slightly to the left, and attempted to curl a strike into the far corner but got the execution badly wrong and sent it well wide of the far post in front of home jeers.

Laurent dropped with head in hands as Town’s moment came and went.

Their much-improved second-half display was well worthy of a point and Ricketts will hope for more of the second-half performance moving forward.