On an afternoon of near sub-zero temperatures in Darlington, Bucks substitute Marcus Dinanga demonstrated an assassin’s icy-cold instinct, netting a second-half hat-trick to claim a victory that had looked unlikely a little over an hour earlier. 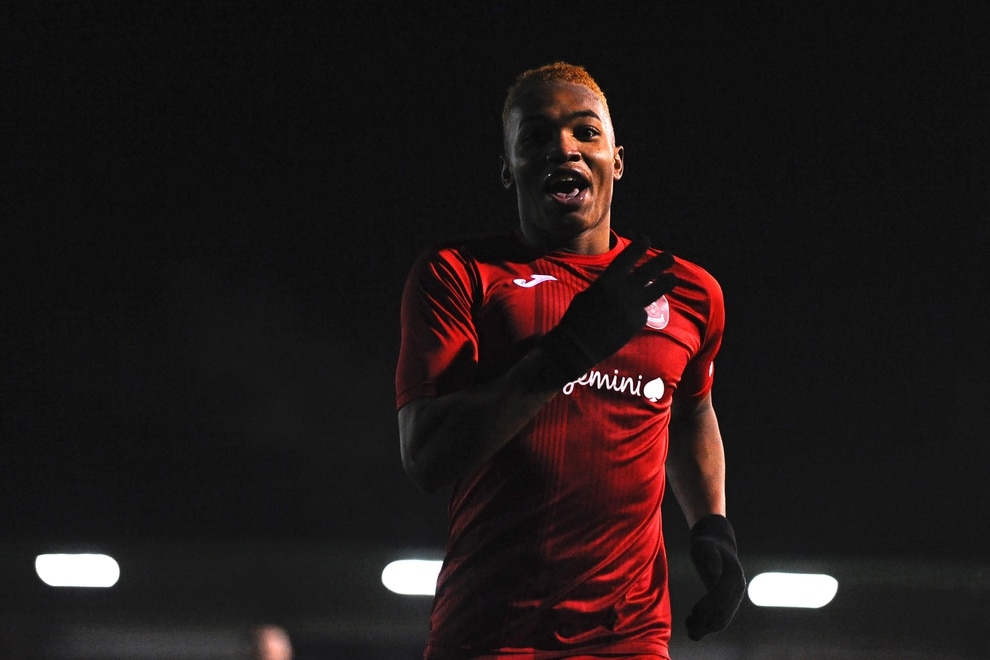 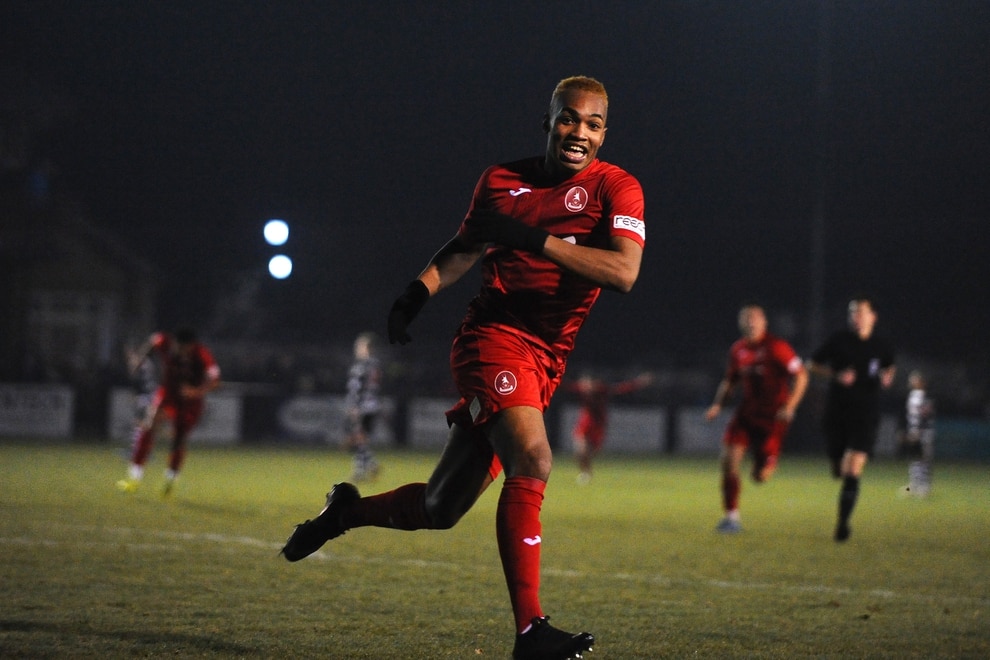 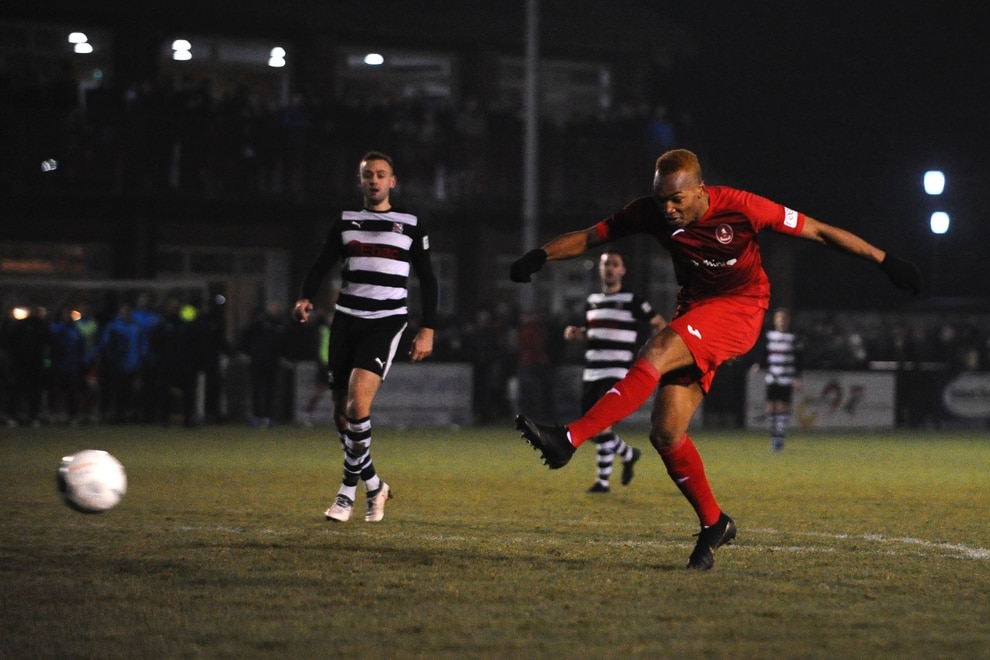 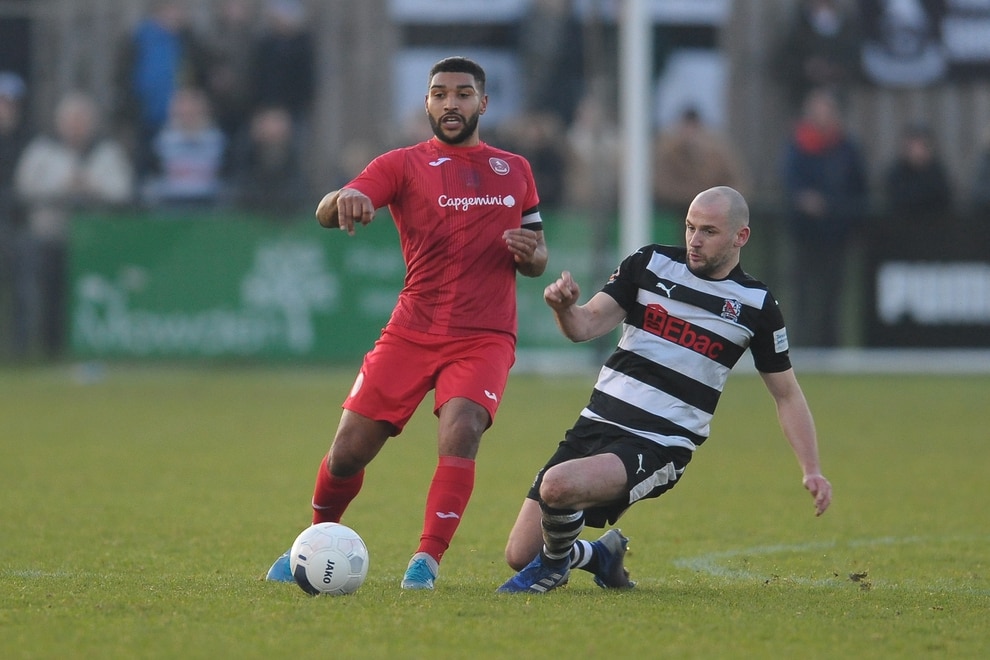 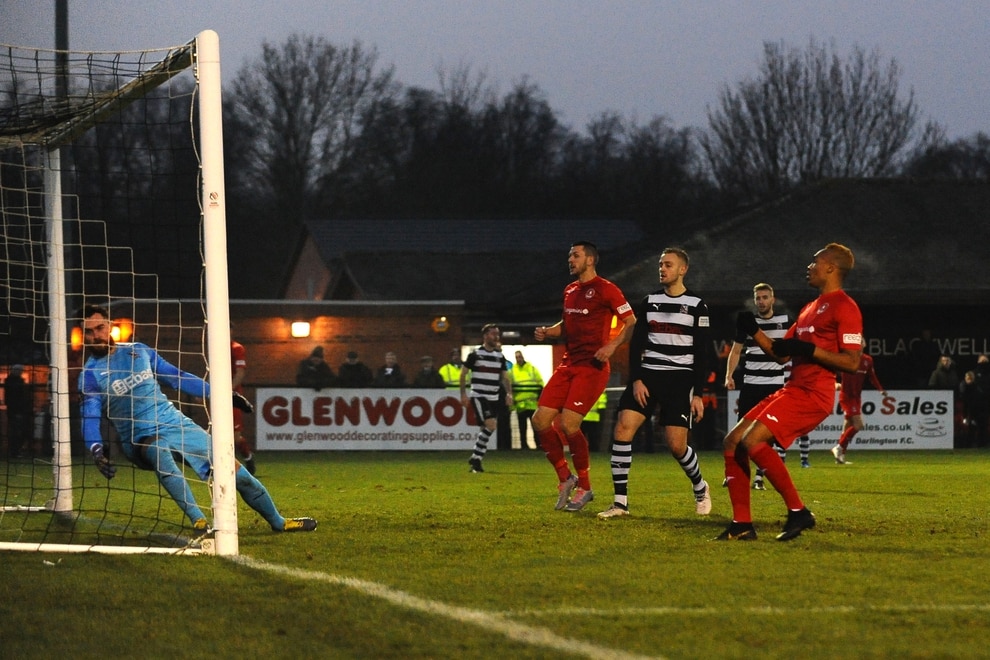 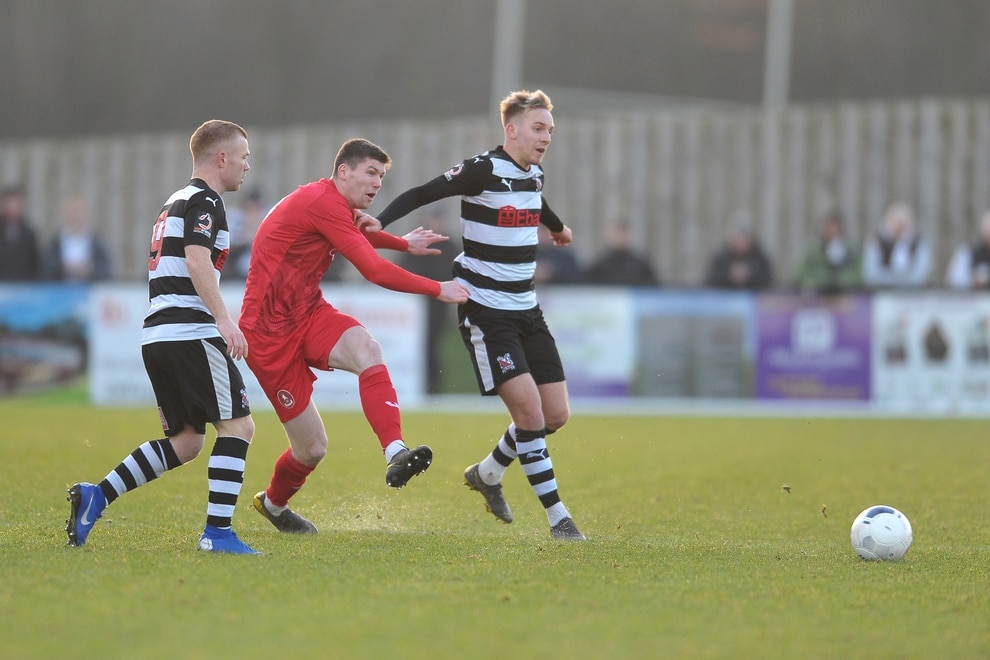 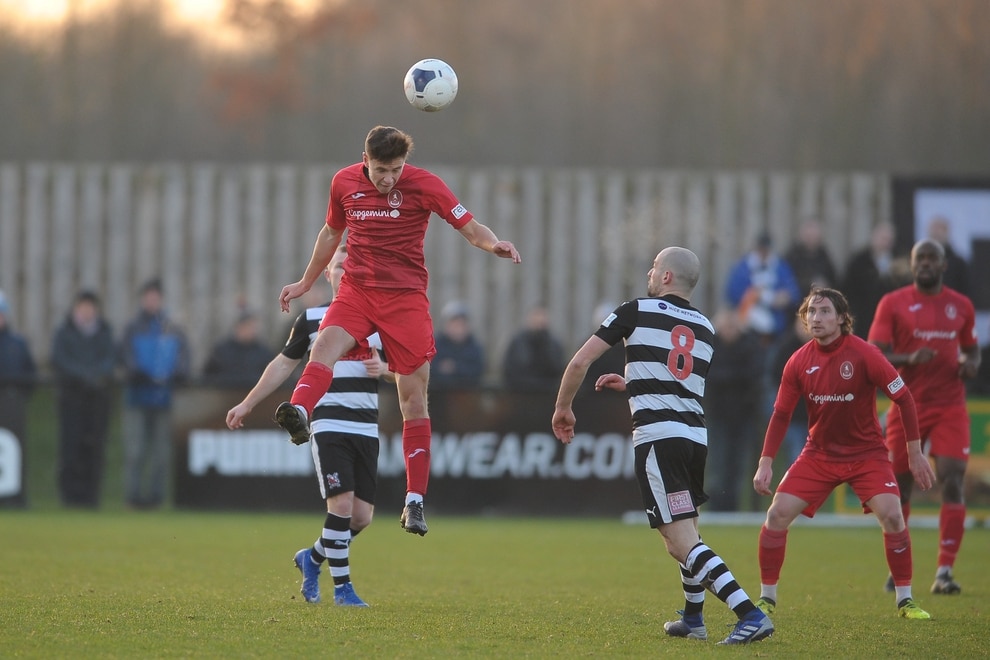 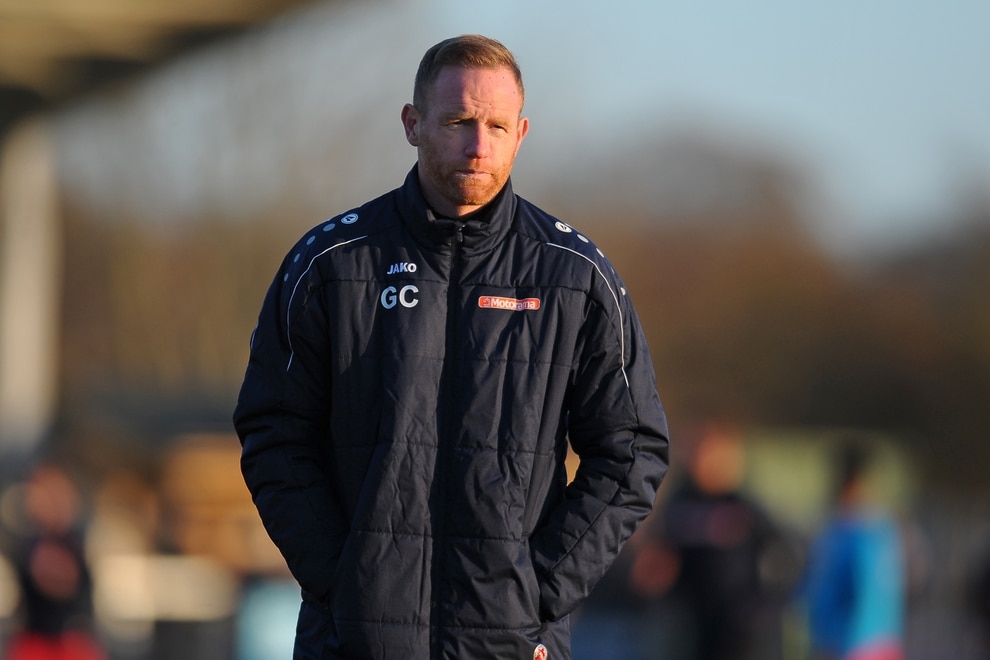 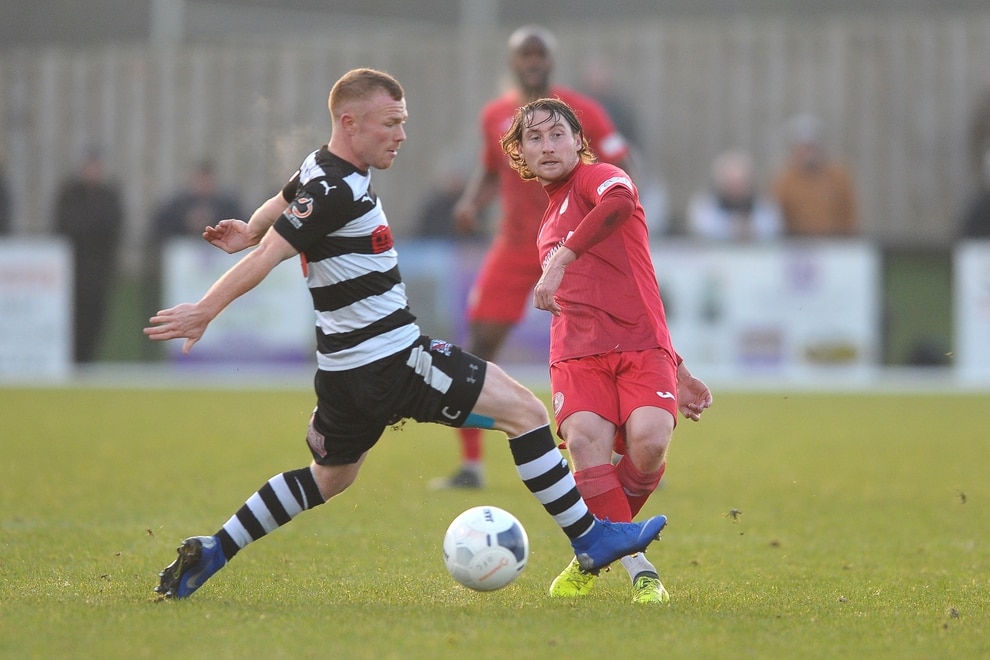 Midfielder James McQuilkin tries to get the visitors going 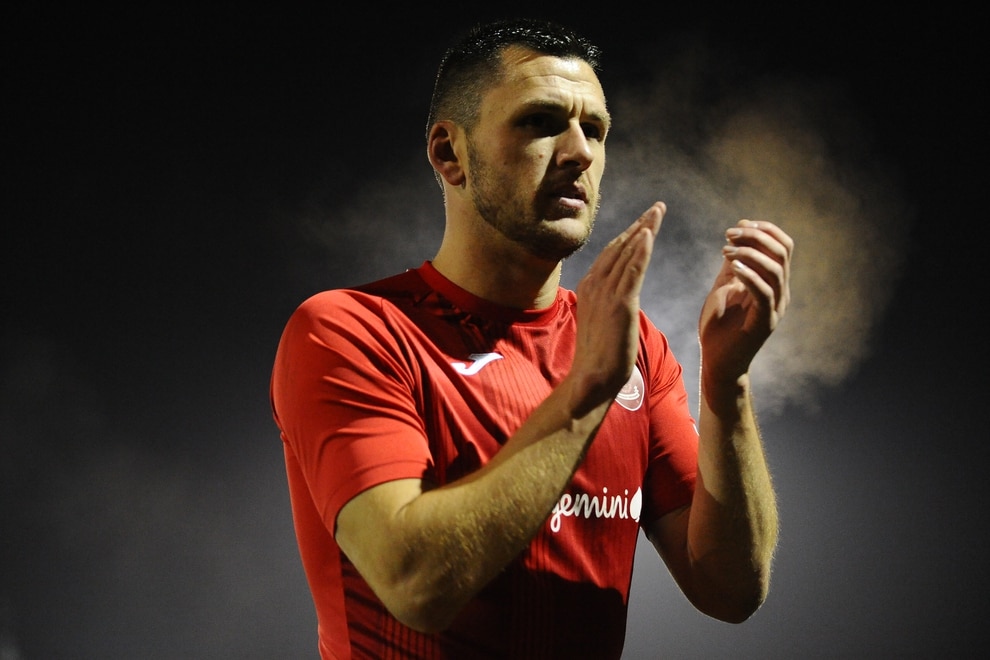 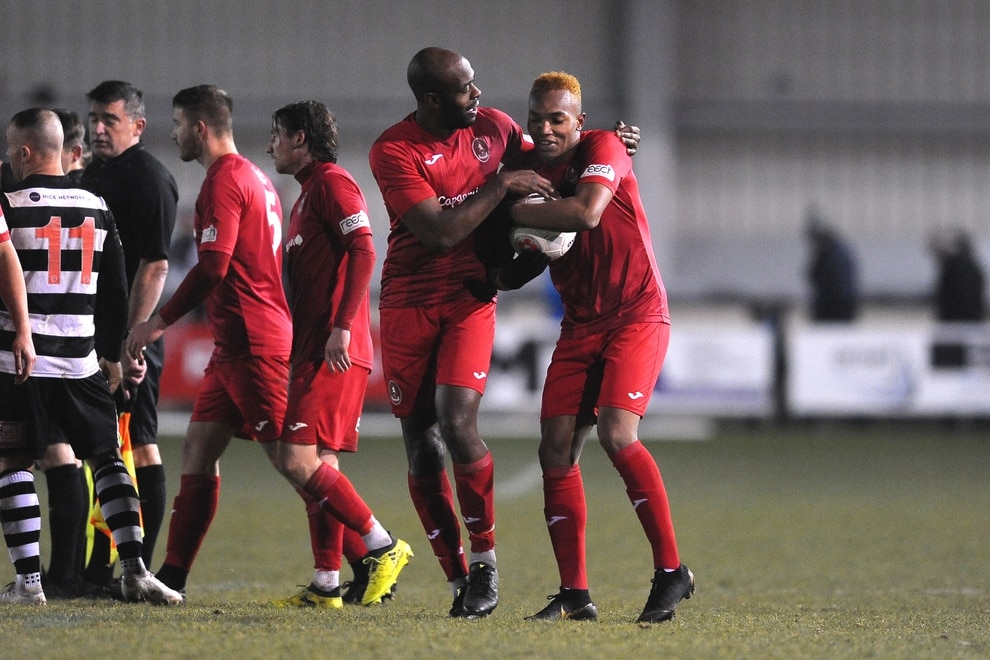 Having fallen two goals adrift after a poor first half showing, manager Gavin Cowan admitted that some home truths were spoken in the dressing room. If the words shared raised the temperature behind those four walls, the Bucks turned the heat up on the pitch too, and when Dinanga finished past home keeper Liam Connell in the sixth minute of injury time the icy chill that descended on Blackwell Meadows throughout the game was transferred to the home fans in the stands, writes Richard Worton.

If the reaction from the home crowd was understandable, so was the response from the hardy band of loyal Bucks followers, who celebrated a victory that will have warmed them all the way back to Shropshire. That outcome looked decidedly unlikely at a quarter to four, with the Bucks Jekyll and Hyde characteristics having initially returned; having spurned opportunities to take the lead, the Bucks dropped off the pace and looked vulnerable in defence.

It was almost a very different story; just three minutes into the contest, Darlo keeper Liam Connell saved well from Ryan Barnett’s angled shot before holding James McQuilkin’s follow-up effort, before Riccardo Calder’s less than decisive clearing header gave former Buck Stephen Thompson a chance to strike a volley into the ground, bouncing up for keeper Matt Yates to palm the ball away.

Left wing-back Calder endured a difficult first 45 minutes, too often caught out by the Quakers’ lively no.7, Bermudan international Justin Donowa, and encouraged by that the home side began to take control. Donowa should have put the hosts ahead on 7 minutes, going past Calder in the penalty area but lacking Dinanga’s cool touch he blazed the ball over the advancing Yates, but also cleared the crossbar.

Darlo earned a succession of corner kicks, with midfielder Joe Wheatley having a shot blocked from 20 yards, whilst McQuilkin did likewise in a rare Bucks attack, his follow-up effort when the ball fell back to him going wide. The game didn’t remain scoreless beyond the 19th minute, however; the Bucks failure to track the movement from a Darlo corner played short between Michael Liddle and Adam Campbell undid them, and when Yates saved the initial shot from Campbell, the ball rebounded off a Bucks defender to defender Alex Storey, who couldn’t miss from two yards out.

The Bucks were unable to muster much in response, and on the half-hour mark they were to fall further adrift. Donawa had the beating of Calder once more, and a good first touch was followed by a decisive second, Donowa lashing an angled shot past Yates and high into the net.

The home side looked to turn the screw, keeping the Bucks under pressure, but a rare incursion into the Darlo half as half-time approached should have brought them a goal. Ryan Barnett beat full-back Michael Liddle easily, crossed low, and when Adam Walker laid the ball to Matty Stenson the net should have rippled; however, an out-of-sorts Matty Stenson got underneath his shot and cleared the crossbar from 15 yards.

With Darlington seemingly in full control, Stenson made way at the interval for Dinanga, and with the game’s next goal crucial the substitute wasted little time in announcing his arrival. Barely a minute of the half had passed when Barnett made ground past Liddle on the right and his inviting low delivery was met on the run by an unmarked Dinanga at the far post, scoring with his first touch of the ball.

The Quakers weren’t quaking immediately, but as the Bucks sensed there was something in the game for them the hosts retreated into their shell. The Bucks defence, in which Zak Lilly gave further evidence of his maturing status alongside Theo Streete, limited Darlo to shots from distance, few of which troubled Yates, and the industrious midfield trio of Walker, McQuilkin and Ellis Deeney began to dictate. Dinanga was starting to make inroads on the left-hand side, and Barnett made way for Brendon Daniels with 20 minutes remaining as Cowan looked to build the attacking impetus. The hosts’ anxiety was now spreading to their fans, and on 76 minutes Dinanga delivered for a second time; a quickly taken free-kick caught the Quakers napping and Dinanga showed composure to beat the exposed Connell for a second time, to the keeper’s right-hand side.

From two goals down to two each, the Bucks looked the side most likely to go on and win. Walker had a shot from 15 yards parried by Connell, and Calder, bouncing back from his difficult first half, helped Daniels cause problems down the right hand-side. Williams saw a goal-bound effort deflected into the side netting for a corner as he tried to beat Connell at his near post, then he set up McQuilkin from a Calder cross, the midfielder’s shot from 18 yards blocked.

Darlo did rally in response and forced a couple of late corners, and Streete had to be alert to block Donawa’s close-range shot on the swivel as he sought to take back the additional two points. There then followed a bizarre incident, with a photographer on the perimeter of the pitch requiring medical attention, halting the game and contributing to six minutes of stoppage time. With virtually the last action of the game, the Bucks again caught Darlo cold in defence and Dinanga once more found himself one-one-one against Connell. The same situation ended in the same result, as Dinanga finished past the keeper’s right to secure the victory. The hosts had frozen, but Dinanga was the coolest man around.

Lee Vaughan insists he has left his Telford wild days behind