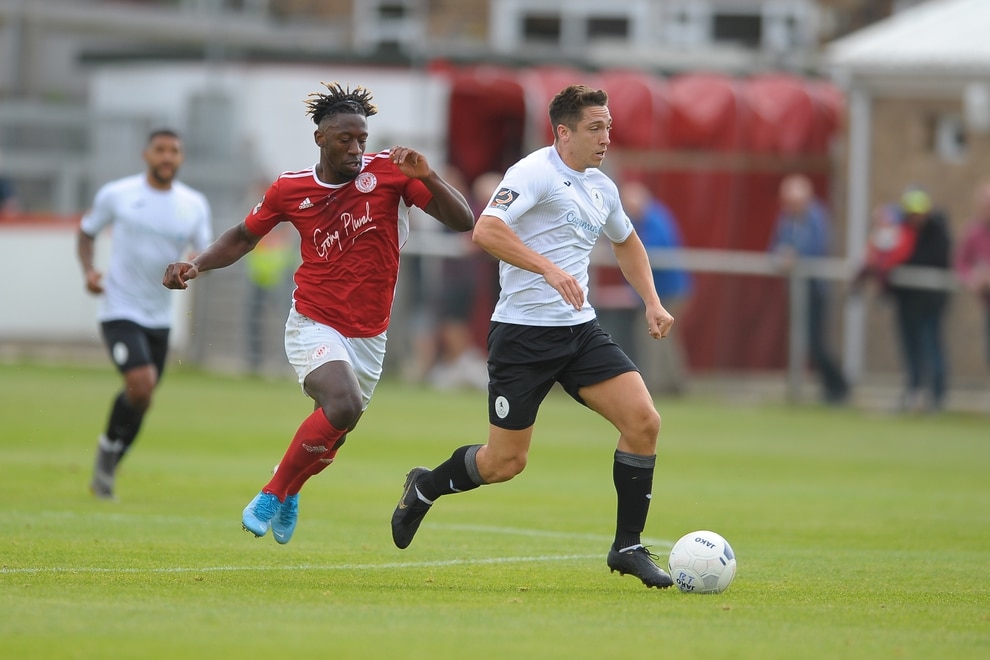 Adam Walker of Telford sprints away from Shep Morumbedzi Ellis Deeney of Telford battles for the ball with Lee Ndlovu 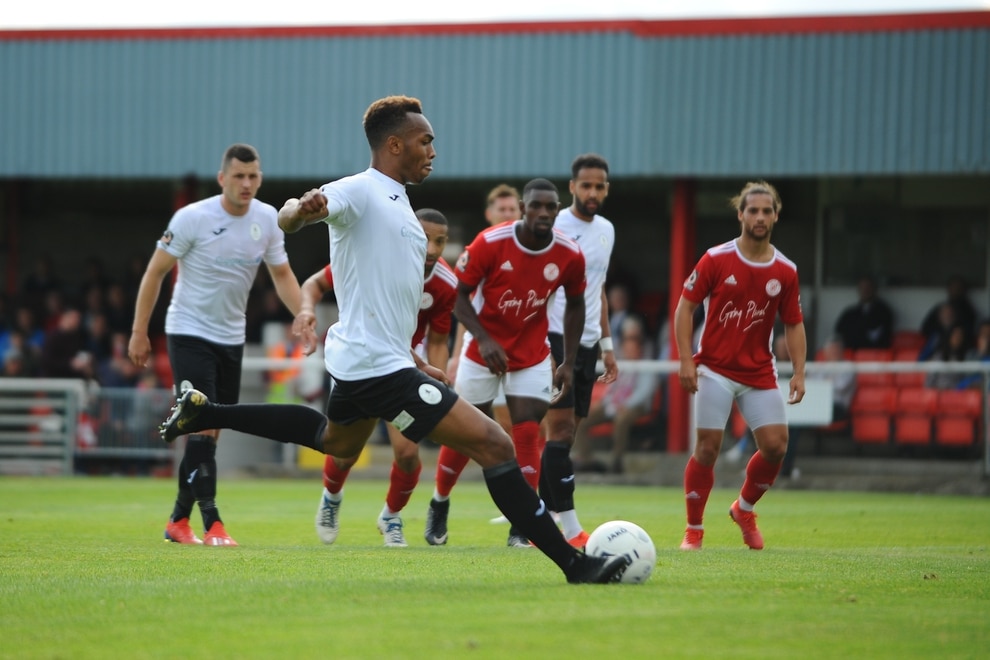 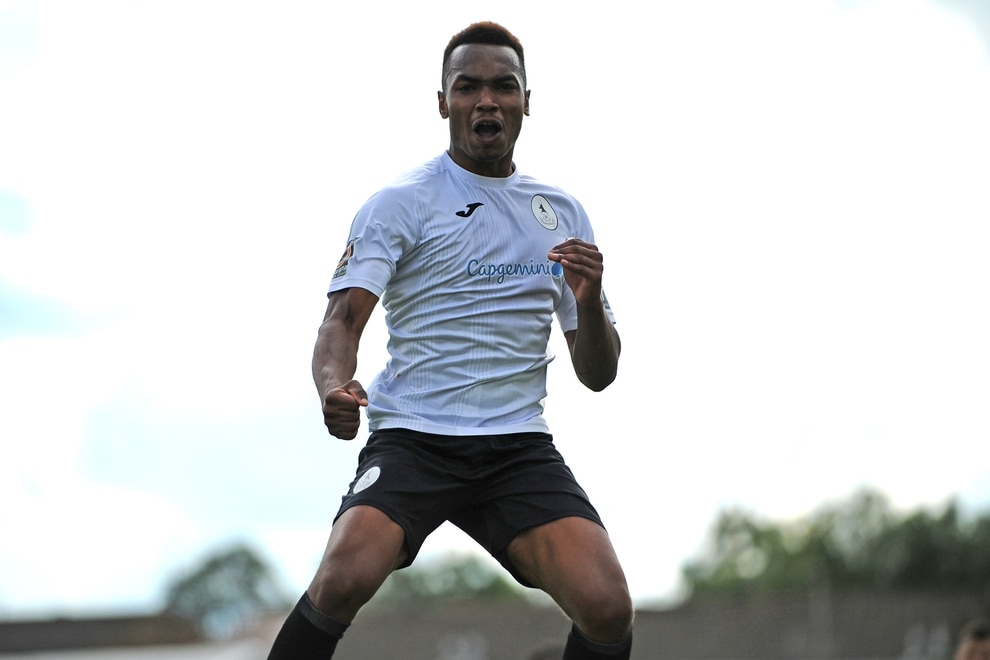 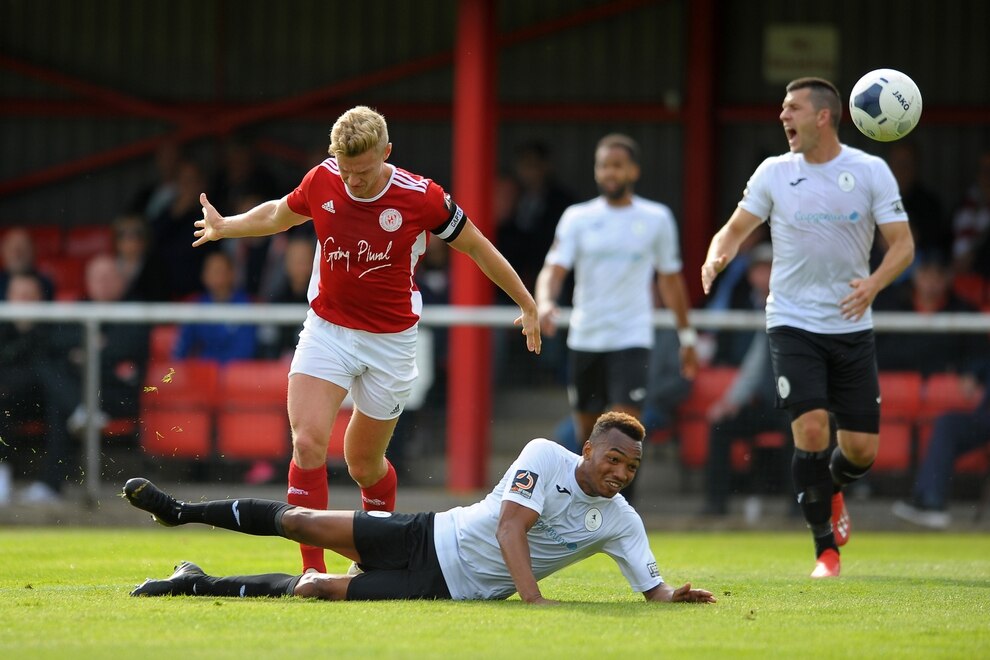 Marcus Dinanga of Telford is fouled by Gareth Dean 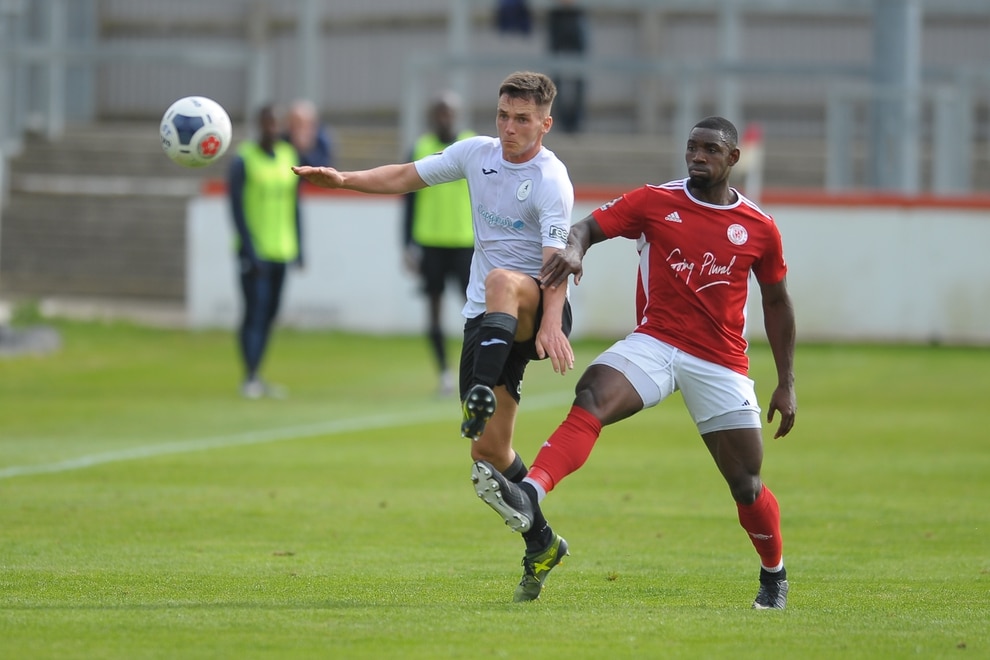 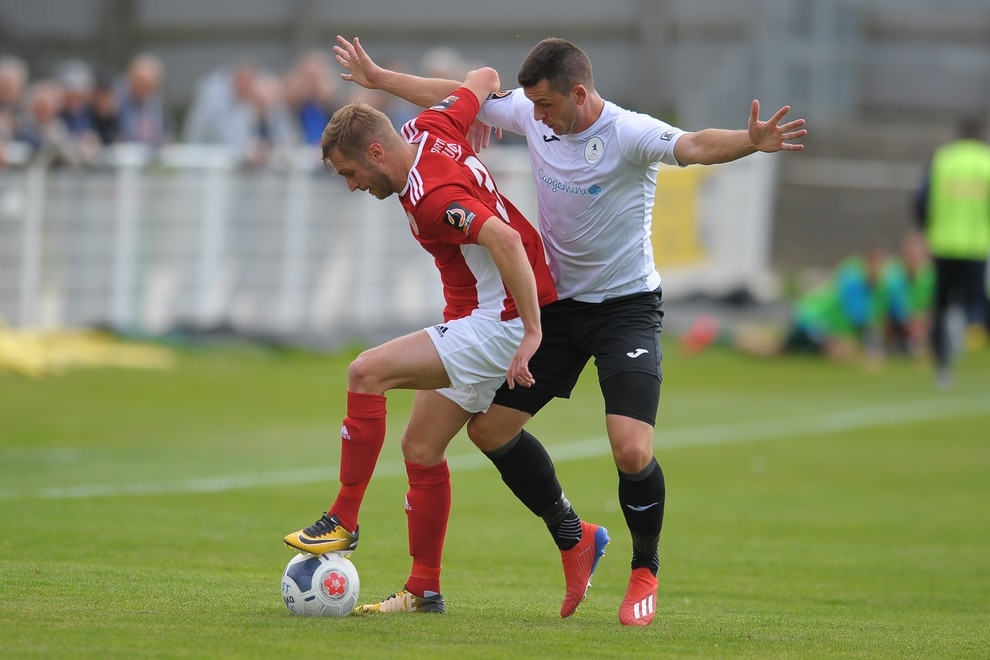 The Bucks made it three National League North matches unbeaten with the point in Northamptonshire, where they fell behind to a soft opener early on.

Boss Gavin Cowan may feel a share of the points was the right result from an even and well-contested game, which improved after the break, despite no second-half goals.

Forward Dinanga, playing as one of three behind lead striker Aaron Williams, made it two goals in two games with his brilliant penalty dispatched into the top corner four minutes before half-time.

Brendon Daniels was closest to winning it for the Bucks with a trademark free-kick that dropped fractions wide of the post.

There was little to do for Telford goalkeeper Wycherley, who was a spectator for large parts of the second half.

Unsurprisingly Cowan opted to field the same side that came from behind so well to make it back-to-back league wins in midweek against Gloucester City.

Winger Daniels was the catalyst, with his strike before half-time. The former Port Vale man had three goals in two games before the trip to Northamptonshire and the Bucks boss was impressed with how his No.7 had began to find some consistency.

With Corey Addai having returned to parent club Coventry City, local lad Wycherley kept his place between the sticks despite seeing five goals past him in the last two outings.

But Cowan’s side had taken maximum points from those clashes at Bradford PA and against Gloucester.

The St James Park contest against Brackley promised to be a much tougher prospect for the visitors though. Kevin Wilkin’s men had made the play-offs after finishing third in the last two seasons.

Brackley are still recovering from a recent fire which gutted the roof of their wooden clubhouse. But, with a replacement building having gone up, were welcome hosts.

Telford midfielder Adam Walker was a familiar face at Brackley, having been an influential part of that successful Brackley side before his summer move to Shropshire.

The sides began the day seventh and 11th in National North, with Brackley just inside the play-offs, one point better off than their visitors from nine games.

The Bucks, so sloppy from the off against Gloucester, started brightly, zipping the ball around in tight situations. Skipper Shane Sutton headed a Steph Morley free-kick over the top.

Brackley settled with a couple of set-pieces into the Telford box but the Bucks were lively in transitions and looked a threat.

Striker Aaron Williams, who enjoyed a prolific spell with the Saints, ran the channels well for the visitors. Holding on to the ball when he had no right to and creating good crossing positions.

Experienced keeper Danny Lewis flapped at one cross but the hosts survived. Dinanga, playing on the left of an attacking midfield three, was the main source of width and a good outball.

For all of their decent first 10 minutes Telford fell behind after 16 minutes through an extremely soft opener.

Winger Lowe rode a couple of challenges on the right before a neat ball into Lee Ndlovu. Zak Lilly made a challenge but the red shirt swarmed Telford’s whites and the ball squared to the unmarked Lowe to finish hard and low.

The Bucks had the wind taken out of their sails and began making sloppy errors.

Ellis Deeney’s wasteful ball into midfielder launched a Saints attack. James Armson lifted a cool lofted pass into Ndlovu’s path, the forward was forced a little wide, and his finish was blocked by Wycherley’s legs.

At one point attacking midfielder Darryl Knights was crowded out and flung his arms in the air in frustration.

Wycherley’s good work was almost undone as he dallied on a clearance charged down by Ellis Myles but, mercifully, the ball flew away from goal.

A bright start had fizzled out but Williams almost made something from very little as he sent a rocket a few feet wide of the top right corner from 25 yards.

Armson then tested Wycherley with an effort from distance.

The tempo dropped out of the contest the closer it got to the break with a spark desperately waiting.

Dinanga had showed some sharpness down the left and it was the forward who inspired his side level.

He juggled the ball into the box with some fleet-footed work and lifted it over a defender before dropping down inside the box. Home skipper Gaz Dean was the guilty party, or at least in the eyes of referee Jon Kenny. It didn’t appear Dinanga went down under too much pressure.

But his finish could not be doubted. Dinanga hammered an inch-perfect spot-kick high into the top right corner in front of the joyous Bucks following.

A Shep Murombedzi deflected drive from the edge of the box gave keeper Wycherley an early tested at the opening of the second half.

Sutton then climbed well to head a Morley corner over the top.

The Bucks looked sharper after the break. A good touch and drive from Walker into the box led to the returning midfielder shooting wide across goal with his left foot.

Telford skipper Sutton had been solid but Ndlovu escaped his presence on the break and looked to be bearing in on goal. Sutton recovered but Ndlovu cut inside and got a low shot away that Wycherley was equal to.

Moments later Deeney twisted and turned in the Brackley box before his shot was blocked. The second half was a more watchable, higher-paced clash. Armson’s dangerous header was smothered by Telford’s defence.

Left-back Morley then speculatively let fly from some 35 yards but the ball sailed over.

Knights then shot over from distance after a neat Bucks move. Cowan’s men had upped the ante.

The Telford fans, behind the goal their side were attacking, were in great spirits and helped raise an atmosphere as the game entered its final third.

Brackley sent on an extra striker with 15 minutes to play in search of a winner of their own.

Deeney stopped to head off the line directly from a left-sided Brackley corner, but the official had already whistled for a foul on Wycherley.

Set-piece specialist Daniels almost stole maximum points with five minutes on the clock with a floated 25-yard free-kick towards the top right corner that dropped an inch or two wide.

Saints sub and former Shrewsbury favourite Kelvin Langmead arrived as an added time sub when the hosts were preparing for a corner. He met the delivery but could only head wide as the outcome was confirmed.

Lee Vaughan: Plenty left in me for AFC Telford