As role models go, it is unusual, but it also seems quite apt. 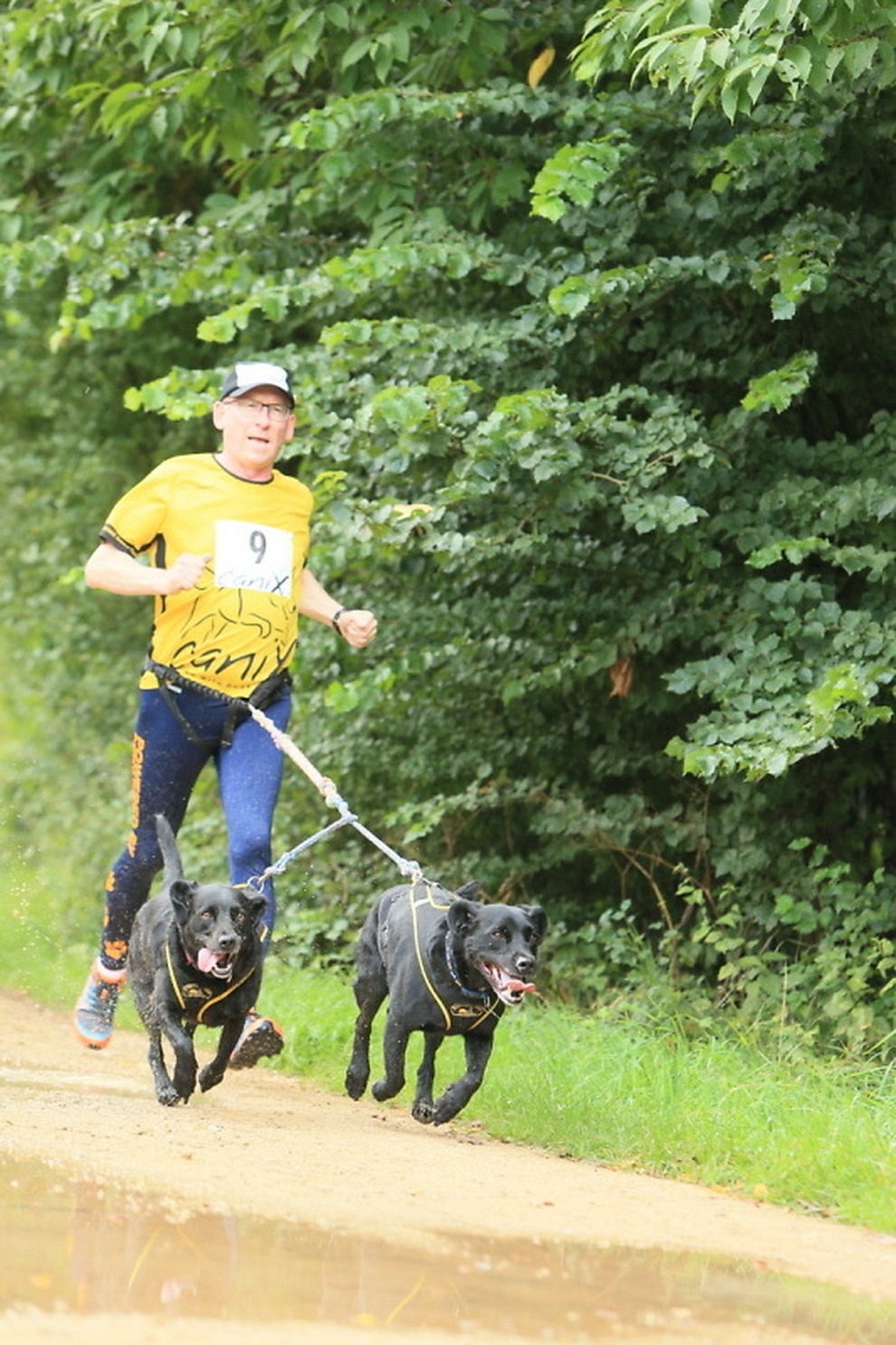 Paul Kalinauckas running with his dogs Jasper and Sheba 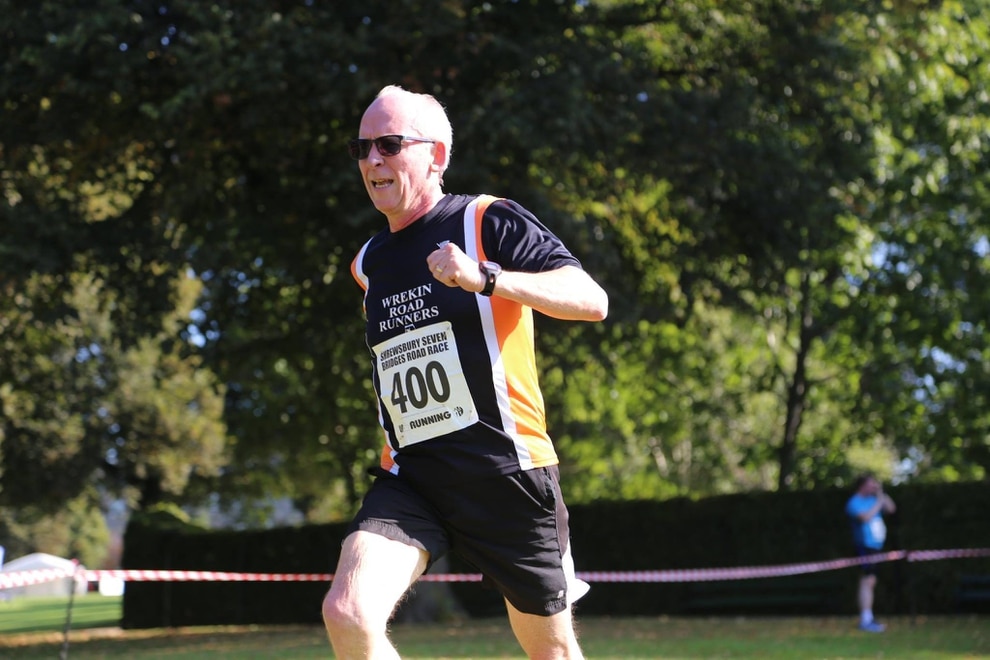 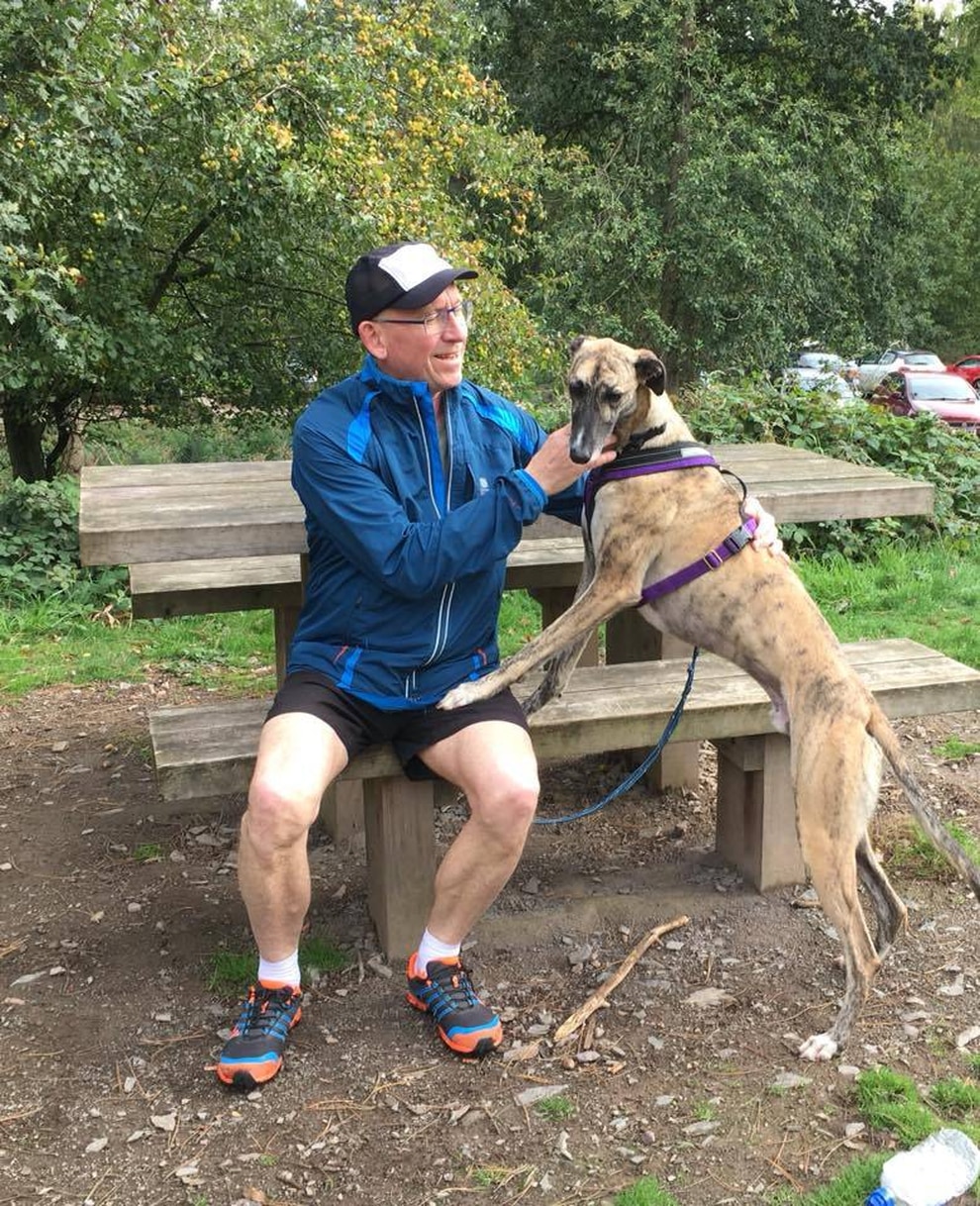 Paul Kalinauckas and his friend in Telford Town Park 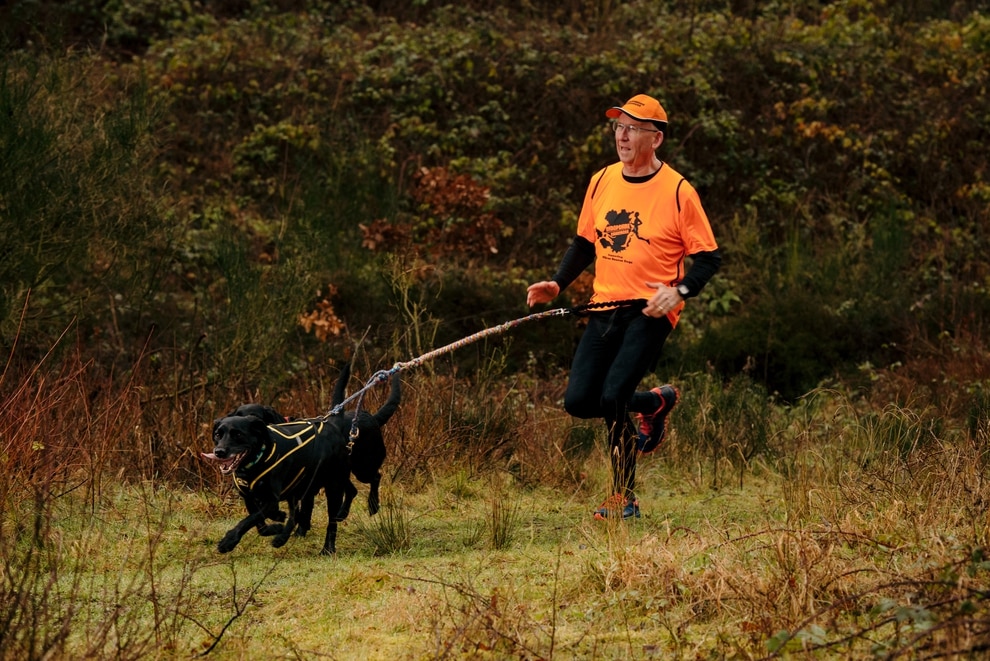 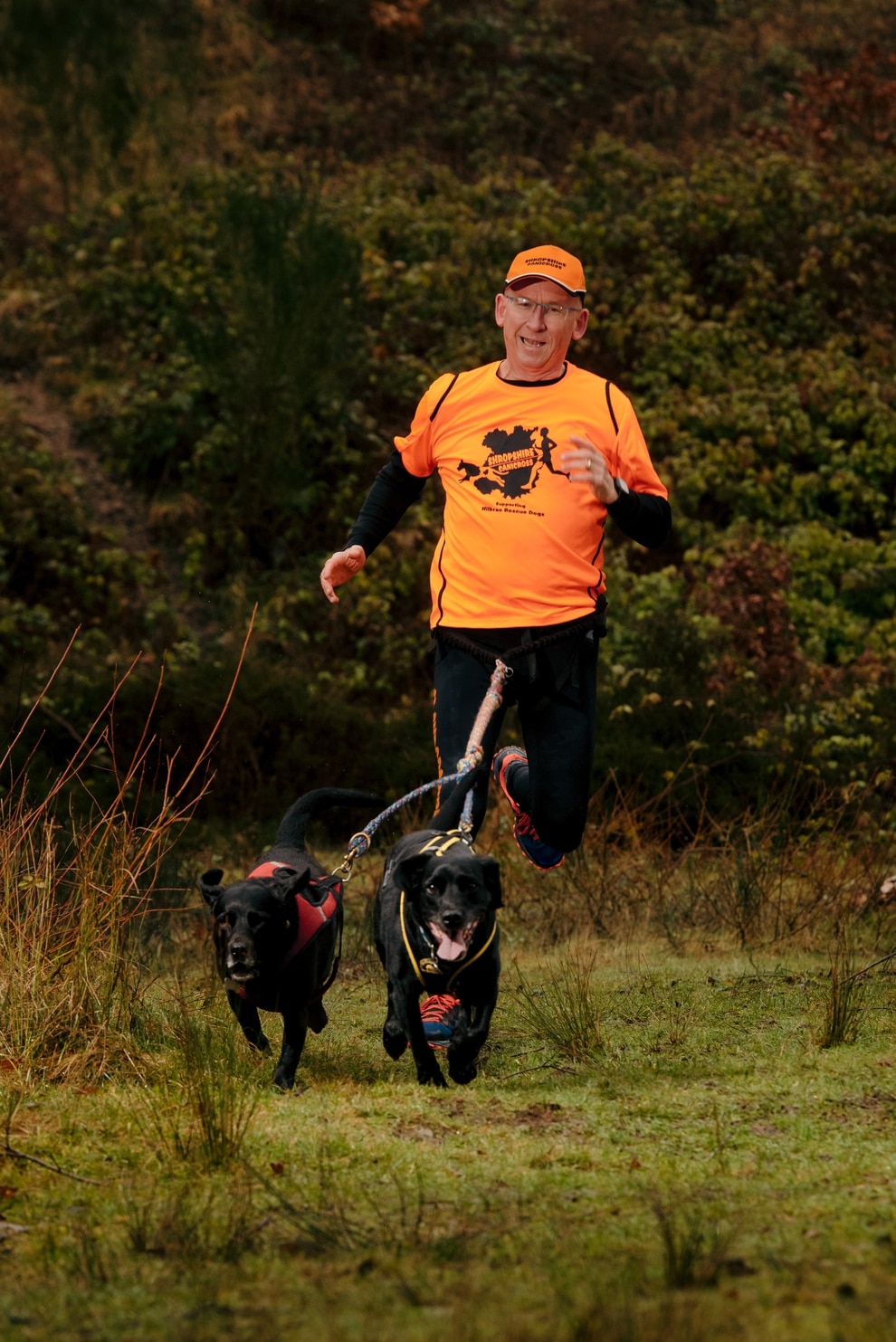 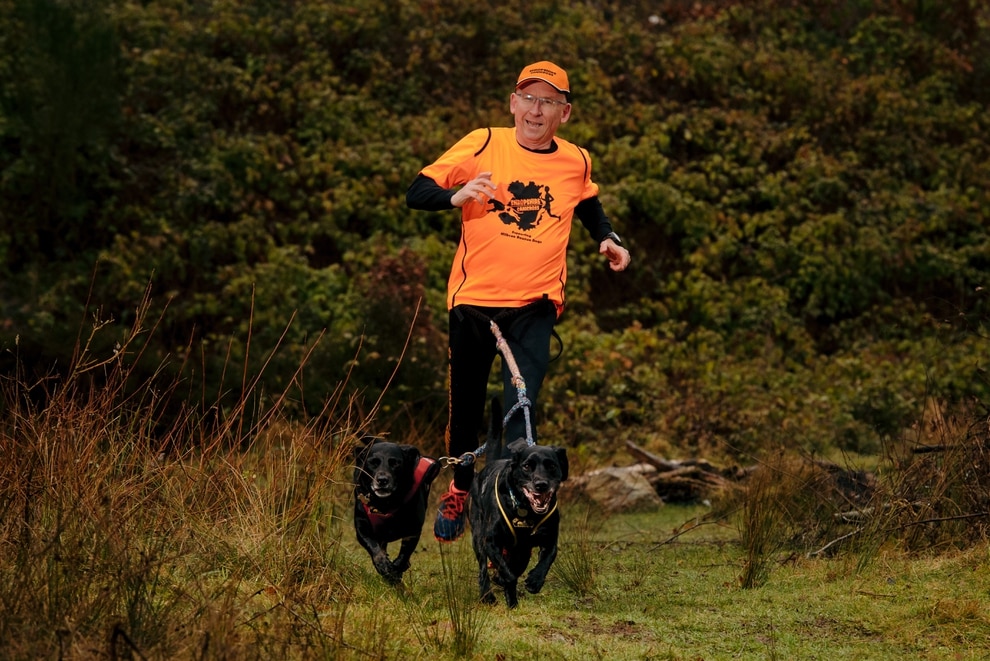 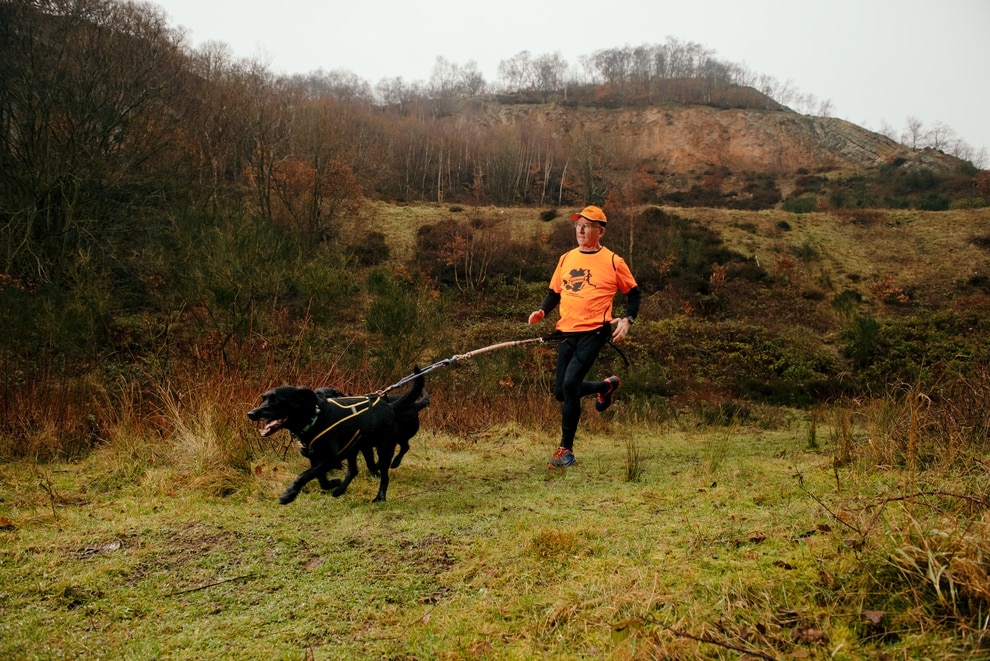 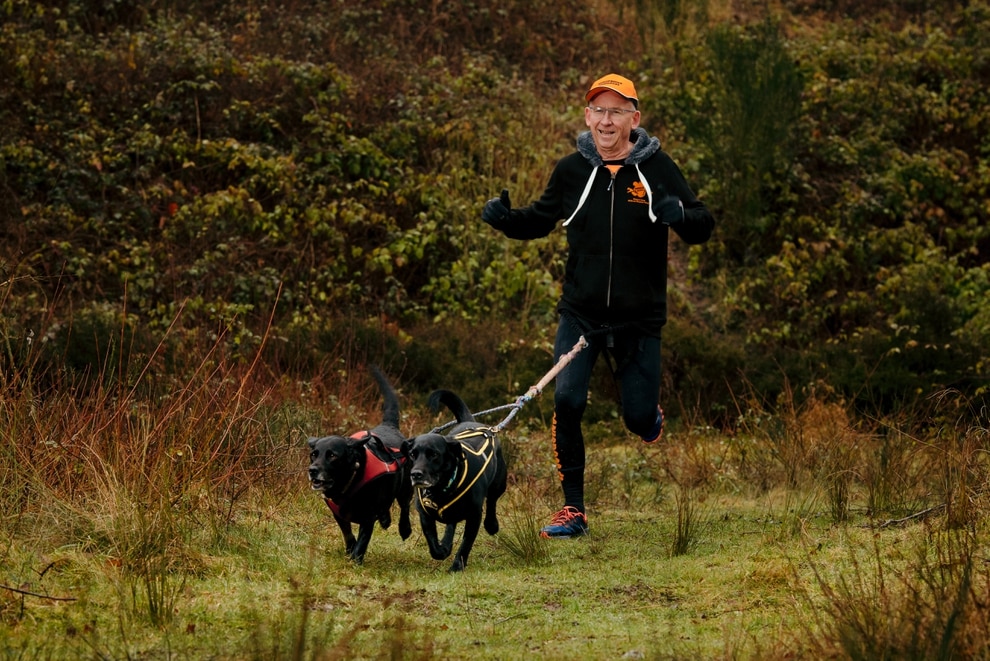 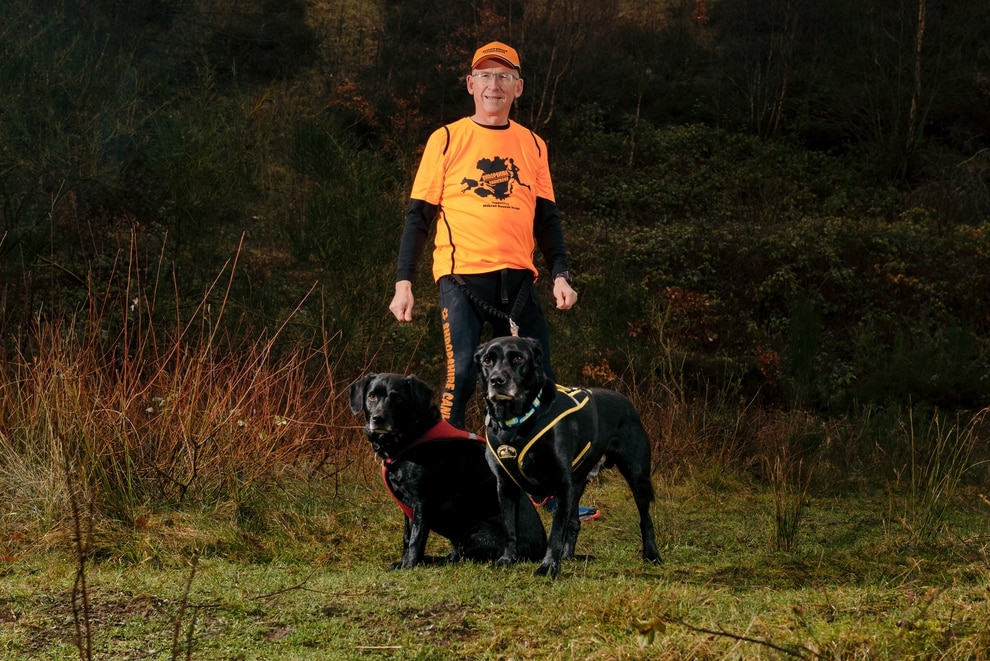 "I see myself as a sort of Eddie the Eagle at the world championships," says Paul Kalinauckas, as he speaks of his ambitions of competing on the world stage in a sport few people have heard of.

"I'm not going to come first, but I'm going to be there, at the world championship."

And the sport in question? Canicross, a sort of combination of running and sledding, where competitors are dragged along by excitable dogs strapped to their waste.

For Paul, a 64-year-old former Wolverhampton councillor, it gave him a new lease of life, after being diagnosed with type two diabetes in his mid-50s. It has also helped him lose four stone, and he says he is now the fittest he has been in 30 years. And he has now been selected to run the London Marathon.

So what has made him such a tenacious ambassador for this most niche of sports?

Paul, who lives in Wellington, goes back to the time he was diagnosed with diabetes, after being given a blood test during a routine visit to his pharmacist.

"When they told me I had got diabetes, it was like 'Whaaat?' It was a total shock," he says. "I'm not suggesting it is a condition as serious as cancer, but my reaction was probably what somebody would be like if they were told they had cancer."

A keen sportsman in his youth, like many he began to pile on the pounds in middle age, although he was never noticeably obese.

"I just got on with my life," he says. "Sometimes I would think I need to do something to get fit, and I would run around the block or join a gym, and then stop going after a few months. It was a bit like new year resolutions. Sporadic attempts at gym and running in adult life fell by the wayside and I gradually bulked up, peaking at 16 stone with a 42-inch waist."

After a couple of years spent 'in denial' about his condition, Paul joined Wrekin Road Runners.

"It was a very friendly club, and they had the philosophy where you run for one minute, and then walk for three, which suited me," he says, but admits it was still tough going to begin with.

"The first year was really tough until I saw someone running with his dog at Telford Park Run, and discovered the exhilaration of Canicross.”

He set up Telford Canicross, which has now expanded to become Shropshire Canicross, covering the whole of the county, and now has 500 miles.

He says dogs have a natural instinct to run, probably dating from their time as working animals pulling sleds, and need little encouragement.

"We know that, because every Saturday we at Shropshire Canicross go to Hillbrae rescue kennels and take out a dozen of their dogs we have never seen before, and give them a 5km run," says Paul, who is married to Helen and is chief executive of BCRS Business Loans.

"If you had a lead in your hand, they would pull you over, so you fit them with a harness and a bungee rope which is attached to your waste, you have to have the proper equipment."

He says a lot of people are attracted to the sport because their dogs need exercising anyway, and think they might as well get fit at the same time.

"They enjoy running with their best friend."

Paul says his own dogs, Jasper and Sheba, are ideally suited to the sport, as they have very powerful muscle structures.

"They are what we call springadors, a cross between a springer and a labrador. They have very strong haunches and you can't keep up with them, so it helps me to run very fast. You just have to keep you knees high, it is like you are flying, you hardly ever touch the ground."

The sport has seen Paul's weight plummet to 11st 12 oz – "I haven't been 11st-something for over 30 years," he says – and he has seen a notable improvement in his running times.

"This month I did the Telford Park Run in 24 minutes and eight seconds, last year I was struggling to get under 30. I feel 10 years younger now than I did 10 years ago."

Paul was selected by Shropshire sports partnership Energize to represent it in this year's London Marathon, beating off a host of applicants for the place.

"It was Paul’s dedication to improving his health and inspiring others, his background in fundraising and his immense enthusiasm for the challenge ahead that swung the vote his way,” says Energize senior manager Ben Harper.

Paul admits he is nervous about the size of the challenge ahead of him.

“I am fearful of running a marathon as I am not a long distance runner," he says.

"I am comfortable with 5k and 10k distances but need a new goal to stretch myself. Running the marathon will be a super stretch for me but also demonstrate that whatever you set your mind to, you can achieve."

But there is another motive for Paul competing in the race – he hopes to finally get rid of the condition which has had to live with for the past decade.

"I have recently committed to a programme that has put my Diabetes Type 2 into remission and hope that all the training for the marathon will finally relieve me of this chronic illness,” he says.

After competing in the marathon in April, he hopes to take part in the European Canicross Championship in Belgium in October, and after that the World Championship next year.

Looking back at his progress, he admits that even he is amazed.

"Who would have thought five years ago that I would be able to do all that?" 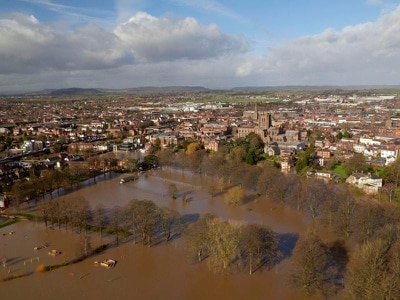