Spain’s tally of infections reached 85,195 on Monday, a rise of 8% from the previous day.

Spain has become the third country to surpass China in coronavirus infections after the United States and Italy.

With a population of only 47 million to China’s 1.4 billion, Spain’s tally of infections reached 85,195 on Monday, a rise of 8% from the previous day.

The health systems in Italy and Spain have been crumbling under the weight of caring for so many desperately ill patients at once.

Spain and Italy make up more than half the world’s death toll from the virus that has upended the lives of billions and devastated world economies.

At least six of Spain’s 17 regions were at their limit of ICU beds and three more were close to it, authorities said on Monday.

“Reducing the pressure on the ICUs will be important for considering de-escalation measures,” said Dr Maria Jose Sierra, who took over on Monday as the health emergency centre’s spokesperson after its director tested positive.

Nearly 15% of all those infected in Spain, almost 13,000 people, are health care workers.

In hard-hit Madrid, flags were hoisted at half staff for an official mourning period.

During a minute of silence, Madrid’s Puerta del Sol central square was empty as bells tolled.

Italy, meanwhile, is seeing a continued slowdown in the rate of its new confirmed coronavirus cases while registering a record number of people cured as it enters its third week into a nationwide lockdown.

Another 812 people died in the last day, bringing Italy’s toll to 11,591 and maintaining its position as the country with the most dead.

Overall, Italy added 4,050 new infections on Monday, bringing its official total to 101,739 and keeping its place as the European epicentre of the pandemic and second only to the US.

Epidemiologists say the real number of Italy’s caseload, however, is as much as five to 10 times more than the official number, but that those cases are not being counted because Italy is only testing people with severe symptoms.

In Japan, organisers said the opening ceremony for the Tokyo Olympics will take place on July 23 2021.

Last week, the IOC and Japanese organisers postponed the Olympics until 2021 because of the coronavirus pandemic.

The rescheduled closing ceremony will take place on August 8.

Tokyo organising committee president Yoshiro Mori said a spring Olympics was considered but holding the games later gives more space to complete the many qualifying events that have been postponed by the virus outbreak.

“We wanted to have more room for the athletes to qualify,” Mr Mori said.

In the US, in a stark reversal of his previous stance, President Donald Trump extended federal guidelines recommending that Americans stay home for another 30 days until the end of April to slow the spread of the virus.

The turnabout came after Dr Anthony Fauci, director of the National Institute of Allergy and Infectious Diseases, said up to 200,000 Americans could die and millions become infected if lockdowns and social distancing did not continue.

“We want to make sure that we don’t prematurely think we’re doing so great,” Dr Fauci said.

The US now has more than 143,000 infections and 2,500 deaths, according to Johns Hopkins University, while three-quarters of a million people around the world have become infected and over 35,000 have died.

Moscow went on its own lockdown on Monday as all of Russia braced for sweeping nationwide restrictions.

Russian president Vladimir Putin has asked all citizens to stay at home, and Moscow mayor Sergei Sobyanin began enforcing a strict lockdown for all city residents except those working in essential sectors.

“The extremely negative turn of events we are seeing in the largest European and US cities causes extreme concern about the life and health of our citizens,” Mr Sobyanin said.

He said an electronic monitoring system will be used to control residents’ compliance with the lockdown and warned “we will steadily tighten the necessary controls”.

Cases across Africa rose closer to 5,000 in 46 countries. Zimbabwe began a three-week lockdown on Monday and more cities across the continent were shut down.

At the peak of China’s restrictions, some 700 million people were in areas ordered to stay home, but those rules are easing.

New York state remained the epicentre of the US outbreak, with the vast majority of the deaths in New York City.

A US Navy hospital ship with 1,000 beds arrived in New York to help relieve the crisis gripping the city.

The USNS Comfort — also sent to New York City after 9/11 — will be used to treat non-coronavirus patients while packed hospitals deal with those with Covid-19.

But infections were spiking not only in cities but in Midwestern towns and Rocky Mountain ski havens. West Virginia reported its first death, leaving only two states — Hawaii and Wyoming — with none linked to Covid-19.

Airbus cuts production by third due to Covid-19 pandemic 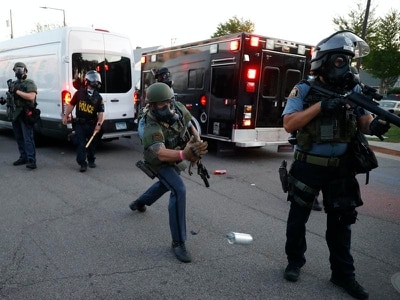