The true price of a good deal

I have sat back over the months and now years watching this country talk of what “we” are going to find acceptable from the EU in the terms for our leaving Europe; the assumption being that the EU will “negotiate” with us to find a mutually acceptable solution.

We even thought that the paying of £39 billion had it sorted. Mrs May, the “I’m a difficult person to deal with” Prime Minister, discovered that the reality was tears on the steps of Number 10.

The negotiation was never ever one between two equals. Or as Mr Gove thought, one where we held all the cards. In fact there never was and never will be a “negotiation”.

I have frequently faced this sort of situation with my house. A knock on the front door, a smiling neighbour. Would I consider selling my house?

“Well, yes,” I say. The indulgent smile, the smarmy grin. This will be easier than they think. Then the first difficulty. I do not leap in with a proposal. Instead a long silence. What price am I thinking of?

“Actually I am not thinking of any price. It’s up to you. You want to buy and I might sell if the offer is a good one.”

The expectation of a gift from a moron is not forthcoming. I might even name a price that is twice what the place is worth. Now an annoyed look. “It’s not worth that much.”

I think it’s worth what you are prepared to pay and what I am prepared to accept if the two meet. If you really, really, want it you will pay the price. You might be a billionaire who wants a better view, that sort of thing. Or you might be a moron in charge of a nation trying to buy its way out of an agreement it now no longer likes.

It might be a case of the billionaire’s wife really wanting that view and me really, really not wanting to sell.

So the EU is coming up with an astronomical price. We lose the right to make the rules, only take them. They will consult us on fishing rights for foreign trawlers in our waters. That sort of thing. Even better, they will pass their laws in our Parliament concerning their citizens, and as for us limiting migrant inflow? Come now, was that really what you thought would happen?

The prize is a piece of paper; a fish and chip wrapping blowing down a deserted street in a deserted steel town, or motor manufacturing plant, or a city dealing room with dust covered screens with old invites to Henley Regatta pinned to them.

That’s why Mrs May had several goes at getting some really daft concepts past Parliament. Just so she could step down and say: “The people’s will.” It was never a runner. They all knew that and still do.

I have collected a whole load of stuff that defines how it will most likely work out but you will not like it if you are a farmer, a banker, a city trader, own a house, want to save a bit for the kids, want to buy stuff like medicine or lavatory paper (That shot on the news of the NHS lavatory paper warehouse, impressive eh?).

Maybe the City boys should float a company for the warehouse? Brings new meaning to the phrase “lavatory paper touched a new bottom” as the trading screens glow red and various algorithms track the progress of lavatory paper down the pipes and out to sea with the rest of the economy. 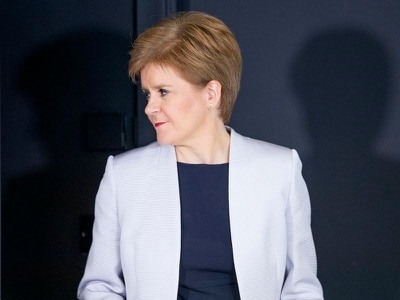