I'm not sure society ladies in the mid-19th century ended a conversation with “we're finished here” but why go picking nits in a series as splendidly escapist as Belgravia (ITV) with that national treasure Tamsin Greig?

Greig admitted this week that before appearing in Episodes (BBC) with one of the megastars from Friends, she had no idea who Matt LeBlanc was. Her defence was that when Friends was at its height in the 1990s she was young and had better things to do than watch telly. And yet Friends was much more than a TV show. In 236 episodes over 10 years it explored just about every human dilemma. It is no exaggeration to say it was the Shakespeare of its age. A hundred years from now, viewers will still wince with empathy at The One with the Prom Video. Poor Ross.

According to research, eight out of 10 people in the West Midlands have no idea who is the region's mayor. I do. But then I have a personal interest in it. From time to time over the years I used “Andy Street” as a nom-de-plume. Not any more.

I would never make a successful food hoarder. I had barely put my panic-bought tin of Spam in the cupboard than, overcome with nostalgia, I took it out for breakfast. Oh, what wonderful, filling, comforting stuff it is. Do you think the inventors designed it to fuse into a chewy golden crust in the frying pan or did it happen by accident?

If you're a pensioner living in penury, niggled by chronic illness, ignored by relatives, cheated by scammers and sneered at by the young, this week's Daily Mail headline on self-isolation must have had a wry sort of ring: “The Party's Over.” Some party.

Amazing, isn't it, how at a time like this real people morph into movie characters? Enter the frazzled politicians, diligent experts, plucky citizens and unspeakable panic-buyers. Like players in a drama they find their hour and strut their stuff. Sure enough, the casting department has now supplied us with those essential characters, the Great British Slobs. Overweight and over-lagered, they defied Spain's lock-down laws, taunting police in Benidorm and chanting “We've all got the flu, na, na, na.” The Spanish were horrified and offended. One tweeted: “Get them back to the UK!” No, really, there is no rush.

“We must all be Good Samaritans,” declare the Archbishops of Canterbury and York in a joint statement. Amen to that. And while we've got your attention, Your Graces, here's a theological question. If God made everything, did he make Coronavirus?

As for being the Good Samaritan, I'm not sure whether this counts. A pornography website is offering free access to its premium service to people who live in Italy. I foresee a plague of deafness. 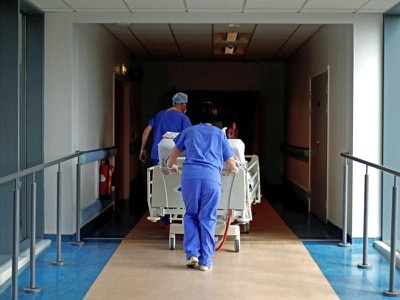