I’m no scientist. O-level physics, biology and chemistry were the closest I came to challenging Sir Patrick Vallance as Chief Scientific Adviser.

I do, however, have common sense. And so I’ll put my neck on the block by saying this: three weeks from now, we’re heading towards a second wave of Covid-19 deaths.

The British willingness to help is largely shot, thanks to Day Tripping Dom and his elite trips to Specsavers, or wherever it was he was taking his wife and child to for a lovely day out.

Incidentally, SuperDom has killed the Government’s approval ratings. More people now disapprove of their handling of Covid-19 than approve.

Seventy-two per cent don’t believe his version of events, 68 per cent think he should resign and more than half believe he has damaged the fight against Covid-19. Thank goodness scientific advisors Jenny Harries and Jonathan Van-Tam have had the backbone to say the rules apply to everyone.

Seventy-four people died on the day we entered lockdown and accepted Covid-19 had spiralled out of control. Our current daily average is around 250.

Track and trace is effective. Countries such as Germany, South Korea, Hong Kong, Singapore and New Zealand, which persisted with expanded and rigorous testing and tracing programmes, have fared better with lower deaths rates than those which did not, such as Belgium, France, Italy, Spain, the UK and the USA.

However, when infections are high, track and trace is insufficient because there are too few workers to implement it. So our current shambles of a system is arguably as reliable as an alcoholic in a distillery.

Even if it were somewhere resembling organised, in order for it to be effective the number of new infections per day would have to be in the low hundreds, not the high thousands. So with Brits heading to BBQs, beaches and parks, with morale low thanks to Dom and with too few testers to monitor the continuing spread, how can we be heading for anything other than a second wave? I hope I’m wrong.

Peter Rhodes on statues, stigma and modern heroes who turn out to have feet of clay 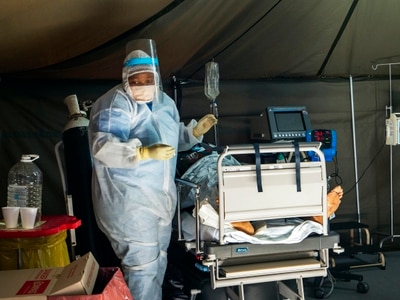