The performances will be able to resume from Saturday.

Prime Minister Boris Johnson has given the go-ahead to delayed plans to resume socially-distanced indoor performances in England.

The Government had previously given the green light for performance spaces to welcome back audiences last month, however the move was delayed amid a rise in the prevalence of coronavirus in the community.

Indoor performances can now take place from Saturday, except in locations such as Manchester where additional restrictions have already been imposed.

The move was announced alongside plans to relax rules on businesses including bowling alleys, skating rinks, casinos, beauty salons and tattoo studios.

Culture Secretary Oliver Dowden said: “The nation’s hard work to keep the virus under control means we can now make further careful progress on recovery with allowing audiences back for indoor performances, fans back at sports events and the reopening of more Covid-19 secure leisure businesses.

“We must all continue to stay alert but today’s welcome news means these organisations can finally get going safely, and we can enjoy more of the things we love as a nation.

“I have no doubt that they will work incredibly hard to keep their fans, patrons and customers safe.”

The move sees the Government advance to stage four of their plan for the phased return of live shows, which allows for performances both indoors and outdoors with a limited capacity audience.

Stage five, which is the final step of the plan, would see performances allowed both indoors and outdoors with fuller crowds.

The move follows a “successful series of pilots”, according to a statement from Downing Street.

One of the pilot performances saw singer Beverley Knight perform at the London Palladium theatre in front of a sold-out, socially-distanced audience.

Andrew Lloyd Webber introduced the matinee performance last month and labelled it as a “rather sad sight”, adding that the venue “is meant to be full”.

A trial concert was also held at the Clapham Grand in south London last month.

Ally Wolf, the venue’s manager, told the PA news agency at the time of the event that while he was confident they could operate safely with socially-distanced crowds the pilot “can’t be the future for live music”.

Socially-distanced performances are “not a financial model that the industry can remotely rely upon to get to be sustainable”, as for most venues operational costs would outweigh profits.

However some venues, such as jazz club Ronnie Scott’s and Wigmore Hall in London and the Beggar’s Theatre in Millom, Cumbria, had been planning to stage shows until the Government postponed the easing of lockdown measures.

A £1.57 billion support package for the arts has previously been announced by the Culture Secretary.

Oh what fun they’ve had: Madness talk ahead of Wolverhampton Racecourse show 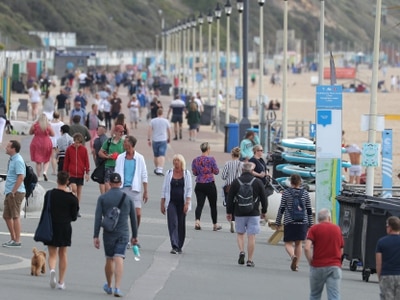