Police and a hospital worker have suffered attacks.

Police officers are being deliberately coughed and spat at by suspects despite warnings that using Covid-19 as a threat could lead to two years in jail.

Sussex, Hampshire, Northamptonshire and the Metropolitan Police all reported that officers had been spat at over the weekend by men who claimed to have the virus.

Last week director of public prosecutions (DPP) Max Hill warned the public that using the disease as a threat against emergency workers would be treated as a crime that could lead to up to two years in prison.

Metropolitan Police firearms officers said on Twitter that they had Tasered a suspect for deliberately “coughing saliva” over officers in Seven Sisters Road in Haringey.

They were driving along at around 4.20pm on Saturday when a 24-year-old man “began to shout and make rude gestures towards them”.

When the firearms officers stopped to talk to him, they said he “shouted that he had coronavirus before deliberately coughing saliva all over them”.

He then began to physically attack the officers, it is claimed, before he was Tasered and arrested on suspicion of public order offences and assault on an emergency worker.

The man has been bailed until early April.

In Brighton, police were called to a report of criminal damage at a block of flats in Albion Street at about 5.50pm on Saturday, where they arrested Peter Davy, 65, who allegedly spat at officers.

Davy, of Albion Street, is due to appear at Brighton Magistrates’ Court on Monday accused of three counts of assaulting an emergency worker.

Hampshire Police charged Scott Sleet, 42, of Dursley Crescent, Portsmouth, with assaulting an emergency worker and being drunk and disorderly in a public place, after he allegedly coughed and spat at an officer on Saturday.

He appeared at Portsmouth Magistrates’ Court on Monday and was bailed until May 12.

And Northamptonshire Police charged Jamie Edward Tidy, 30, of no fixed address, with assaulting an emergency worker, for allegedly spitting at a special constable at the Criminal Justice Centre in Brackmills, Northampton  on Sunday.

Tidy appeared at Northampton Magistrates’ Court on Monday where he was remanded in custody until June 9.

Last week the DPP warned that anyone using Covid-19 as a threat against key workers such as supermarket staff or members of the public could also face jail time.

Suffolk police arrested Jonathan Steele, 34, from Eye, for allegedly coughing over shoppers and staff in a branch of the Co-op in the town shortly after 11.30am on Saturday.

He has been charged with causing harassment, alarm or distress by threatening, abusive or insulting words or behaviour or disorderly behaviour; and resisting arrest.

Steele will appear at Ipswich Magistrates’ Court on April 1.

In a separate incident in Salford, a hospital worker suffered a fractured cheekbone after he was punched in the face.

Daniel Shevlin, 27, pleaded guilty at Manchester and Salford Magistrates’ Court on Monday to section 20 assault on the NHS worker at the Salford Royal Infirmary, a spokesman for the court said.

Shevlin, of no fixed abode, also admitted an offence under section 4a of the Public Order Act.

He was remanded in custody until his sentencing at Manchester Crown Court on April 27, the court official said.

Greater Manchester Police said a man in his 50s suffered a fractured cheekbone in the incident, just before 1.50pm on Sunday.

Chief nursing officer for England, Ruth May, called for members of the public to respect health workers in response to reports of attacks on staff.

Oxford vaccine ‘could give double protection against Covid-19’

In Pictures: Vikings march in Lerwick as Up Helly Aa recreates Norse history 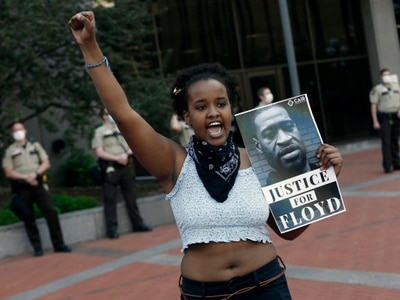