Yellow weather warnings for heavy rain and gales of up to 70mph are in place for the northern half of the UK.

Gale-force winds, ice and rain are set to deluge the UK on Tuesday evening, with weather warnings in place for the northern half of the nation.

It was previously thought that Tuesday would bring Storm Brendan to the shores of the UK but the Met Office said there will not be enough of an impact from winds to warrant a storm name.

Turbulent air from Storm Attiyah caused “mountainous seas” off the coast of Ireland on Sunday, according to the Irish Met Office, and 70mph winds have swept the UK since.

Craig Snell, a Met Office Meteorologist, said the cold and blustery weather in the rest of the UK is “business as usual for this time of year”.

Yellow weather warnings were in place for strong winds in northern England and Scotland until 5pm on Tuesday, and for heavy rain in the north west until 8pm.

Wind speeds are expected to reach 70mph across coastal and high-ground areas north of Wales.

Icy patches and wintry showers may lead to some travel disruption in Scotland, where a weather warning is in place throughout the night until 10am on Wednesday.

Five flood warnings for some coastal areas in the South West and North East of England have also been issued by the Environment Agency.

Police officers were called to a partially collapsed crane in south London on Tuesday afternoon.

The collapsed machinery, on a building site on Fassett Road, is not thought to have caused any injuries – but at this point, it is not clear whether the fall is related to the weather.

Mr Snell said: “We have yellow warnings for rain and strong winds across the northern half of the UK, with strong showers affecting western areas.

“There’s likely to be sleet and snow across the mountains in Scotland and a chance of ice on the roads.

“Elsewhere, it’s a cold night, but we’re not expecting any problems with cold or ice.”

Mr Snell said the rain is due to ease by midday on Wednesday, when it will be dry and bright across much of the UK.

He said: “Despite the sunshine, it will be feeling fairly chilly out there.”

South-easterly areas will see the highest temperatures of up to 9C (48.2F) on Wednesday while temperatures of between 4C (39.2F) to 7C (44.6F) are expected for the rest of the country.

What the papers say – January 20 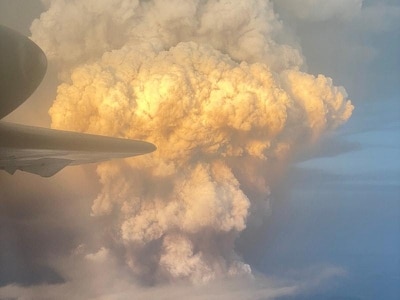