Labour’s Jonathan Ashworth has apologised to party members after being caught on tape giving a damning assessment of Jeremy Corbyn.

He was caught saying the situation facing Labour was “abysmal” because voters “can’t stand Corbyn” and think the party has “blocked Brexit”.

Here are some of the highlights from Tuesday’s campaign trail.

The shadow health and social care secretary described as “banter” leaked comments in which he criticised Mr Corbyn and said a Labour majority at the election was not going to happen.

Mr Ashworth conceded that the leak made him “look like a right plonker”, but said he made the remarks while “joking around” with Tory friend Greig Baker.

In the recording published by the Guido Fawkes website, Mr Ashworth claimed he thought the civil service machine would “pretty quickly move to safeguard security” if Mr Corbyn entered Number 10.

– Jeremy Corbyn insists the experience of a four-year-old boy left sleeping on a hospital floor while he waited for a bed is a political issue.

A photograph of Jack Williment-Barr, who was waiting for treatment for suspected pneumonia at Leeds General Infirmary, was widely circulated on social media.

Boris Johnson came in for heavy criticism on Monday when he initially refused to look at the photo on an ITV reporter’s phone before taking the device and putting it in his pocket.

The Labour leader told BBC Breakfast: “It’s an example of what’s happening in our NHS. And it is obviously awful for that little boy and the family, the way they were treated… It is a serious issue. It is a political issue, how we fund the NHS.”

The clip sees Mr Johnson emulating a scene from the 2003 Christmas film by silently holding up Brexit-themed messages to a woman at her front door after pretending to be a carol singer.

Grant, who played the Prime Minister in the movie, told BBC Radio 4’s Today programme that he noted the absence of a card that referred to telling the truth.

He said: “I thought it was quite well done, very high production values, but clearly the Conservative Party have an awful lot of money. Maybe that’s where the rubles went.”

Leave-supporting voters in Labour heartlands should “vote tactically” and back the Brexit Party instead of the Conservatives, Mr Farage said.

At the start of the General Election campaign, the Brexit Party stood down candidates in 317 seats won by the Tories in 2017, but it is still standing candidates in Labour seats which backed Leave during the EU referendum in 2016.

Addressing supporters, Mr Farage said his decision to stand down his party’s candidates in Tory-held seats was “difficult” but “the right thing to do”.

The porridge-eating Labour leader has said he “absolutely” has the stamina to serve a five-year term as prime minister.

The 70-year-old has faced claims that he is too frail to run the country, but told BBC Breakfast he is healthy, fit and active – attributing porridge as his source of energy.

Tweets of the day

Mr Johnson emulated a scene from Love Actually as he approached an apathetic voter with a series of placards on her doorstep, while in Mr Corbyn’s spoof video, the Labour leader sat by a fireplace and read out mean tweets about him and his campaign.

Picture of the day

Video of the day

Hugh Grant gives a withering response to the Love Actually spoof campaign video by the Conservatives. Grant, who played the British prime minister in the movie, told BBC Radio 4’s Today programme that he had spotted the absence of a card that referred to telling the truth. 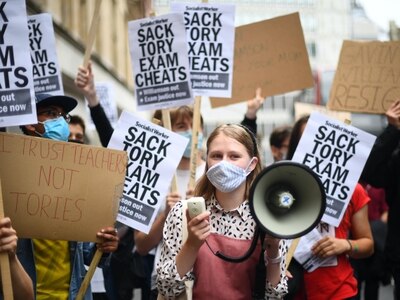