The gesture prompted online criticism, but appeared to have been part of a shared joke.

Boris Johnson has been pictured putting his foot on a table in France’s Elysee Palace during Brexit talks with Emmanuel Macron.

The image was taken during a photo call in the French President’s official Paris residence, and swiftly prompted criticism online.

However, footage of the incident later suggested the brief gesture was a shared joke, with the Prime Minister appearing to pose for the cameras as the pair laughed.

The relaxed atmosphere between the pair was in contrast to comments overnight from the French leader, who had suggested a no-deal Brexit could come at the cost of “a historic vassalisation of Britain”.

The laid-back tone also echoes Mr Macron’s meeting with Donald Trump in November, during which he was seen squeezing the US President’s thigh.

Mr Macron and Mr Johnson both tweeted warm words following the discussions, held as the PM attempts to re-open talks on the UK-EU Withdrawal Agreement.

Shortly after the meeting, the PM tweeted a picture of himself speaking with Mr Macron, adding: “Today I met President @EmmanuelMacron in Paris. Let’s get Brexit done, sensibly and pragmatically and in the interests of both sides. Let’s get on with deepening and intensifying the friendship and the partnership between our nations.”

The French premier then responded in kind, posting: “The relationship between the United Kingdom and France is, in my eyes, essential and unalterable. @BorisJohnson, I see in your choice to come to Paris the need to maintain this privileged relationship. Let’s work together!” 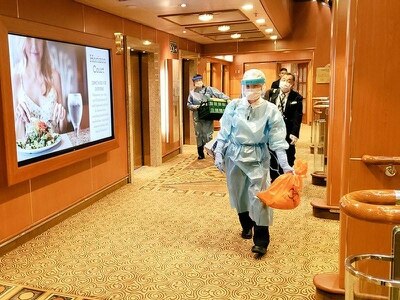