Matthew Moseley was found guilty by a jury after a three-week trial at Preston Crown Court.

A man who pressured his 14-year-old son to take the blame for a murder he committed has been jailed for at least 26 years.

Tree surgeon Matthew Moseley, 50, shot Lee Holt, 32, dead before he handed the firearm to son Thomas and told him to tell police he was the one who pulled the trigger outside their home near Accrington, Lancashire, last October.

Thomas made the fake confession and his father stayed silent as the teenager was arrested and led away in handcuffs.

Last week Moseley was found guilty of murder by a jury at Preston Crown Court following a three-week trial. On Tuesday, at the same court, he was jailed for life and ordered to serve a minimum term of 26 years.

Mr Holt went to Barnard Close with his partner, Kate Phelan, 34, and her 15-year-son, Wesley Metcalfe, to confront Thomas over an ongoing dispute between the two schoolboys.

Witnesses said Ms Phelan banged on the front windows and Mr Holt kicked the front door as they shouted for the Moseleys to come out.

Matthew Moseley opened the front door after he had loaded a semi-automatic Beretta shotgun, and blasted Mr Holt once in chest from up to 10ft (3m) away.

“But matters did not stop there. Far from unloading the gun and providing first aid to your victim, you passed the shotgun to your 14-year-old son, Thomas – itself an irresponsible act in the context of an ongoing volatile situation.

“From that moment on, you falsely sought to blame your son for the shooting. How any father could do that to their son is difficult enough to comprehend but what is truly incomprehensible is the cynical way in which you sought to manipulate, and pressurise, your son into accepting responsibility for the shooting and death of Lee Holt.

“You allowed your son to be arrested and questioned on suspicion of murder when all along you knew you had shot Lee Holt.

“Your continual denial of guilt resulted in him having to give evidence against his own father and members of Lee Holt’s family having to relive the terrible events of the night in question.”

He went on: “That was the obvious thing to have done and what any responsible father would have done. You, of all people, with your vast experience of firearms and their potentially devastating effects, ought to have known better.”

The trial heard how Moseley passed the gun to his son on the evening of October 25 and moments later told him: “Tell them you have done it because you can’t get done for it.”

The defendant quickly laid a false trail of responsibility by telling others that Thomas had pulled the trigger before he too was arrested.

In a covert recording of a prison van conversation, he said to Thomas: “You are a minor. You can’t go to any jail.

“Self-defence for you and you didn’t know what you were doing. Me, different ball game. And that is the way we have got to go with this.”

At his trial he claimed the shooting of father-of-two Mr Holt was an accident after he grabbed the weapon from his son to try to lift it upwards and the gun “just went off”.

His continued denial of guilt put his son through the “ordeal” of being cross-examined in his evidence, said Mr Justice Bryan.

Richard Littler, defending, said his client was a hard-working family man who had reacted in a “bizarre fashion” in the heat of the moment.

He said: “The trouble came to his family home in hours of darkness.

“It is clear the trouble amounted to the kicking, banging and threats at the front of his property which housed his three children, and it is in that context that this defendant reacted in a time where he no doubt foresaw a real threat to his property.”

He added that the defendant’s family had forgiven him for blaming Thomas who, during his evidence, said he continued to love his father “to pieces”.

Mr Littler said: “We submit that the longer the sentence, the longer the defendant is away from his family and the more devastation is caused to Thomas.

“It is hoped that in time they can rebuild the father and son relationship.” 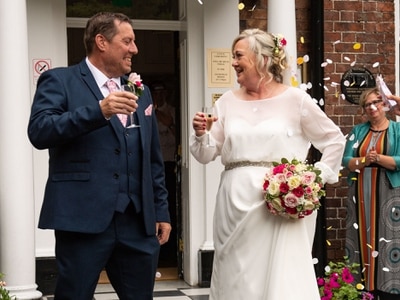