They're staying near Oswestry, but they're definitely not on holiday, and they want to go home.

This fascinating image of German prisoners-of-war at Park Hall Camp has been emailed to us by Kirsten Vollmer, from Bonn in Germany, whose grandfather Max Kuntze is one of those captives from the Great War.

And Kirsten is hoping Shropshire Star readers can tell her more about the camp as she seeks to build a picture of his time there.

The photo is a postcard with the names of all those pictured handwritten on the back, along with the general description "Baracke 19, P/W Officers Camp, Park Hall, Shropshire."

Although undated, it will either have been taken during the Great War, or soon afterwards, as the increasingly restless prisoners were still held in the camps for many months after the Armistice of November 1918.

Kirsten – she can be contacted at Vollmer@bibb.de – emailed us to say: "I am trying to find out more about the time my grandfather, Max Kuntze, spent in the prisoner-of-war camp at Park Hall, Oswestry.

"I hope you might consider the postcard of these times interesting. I suppose that my grandfather, who is the second one on the right side of the photograph, noted the names of the other prisoners on the photograph. Maybe you can add them or compare them with other documents or whatever.

"My grandfather died in 1936 when my mother was only six months old so she could never talk to him herself and knows only what her mother, who died when she was 11 years old, and other relatives told her about him and what was documented in his diaries and so on.

"My parents always felt very close to Britain and took my sister and me there on holidays very often. This somehow planted interest, closeness and sympathy for your country on my side and I continued to go there rather often myself.

"I even have been to Shrewsbury once, many years before, on a holiday trip exploring Wales, not knowing that my grandfather had been close to the town as a PoW in completely different times.

"My mother and me would be very grateful if you could let us know if you have any information about the prisoner camp in Park Hall in World War One.

"What I know about my grandfather is that he was in the army and was captured in Belgium, as far as I know while being on patrol.

"He was one of the last prisoners to be repatriated. Unfortunately we have no diaries of the time he spent in prison camp.

"My mother has a letter his brother-in-law wrote in order to find out where he was, as the family didn't know what had happened to him and that he had been taken to Britain.

"After World War One and his return to Germany, Max Kuntze continued to work as a teacher at a primary school at Caputh, a village close to Potsdam and Berlin, until his early death in 1936.

"What I know of my grandfather is that as a boy he had wanted to go to sea in order to see something of world, which was one of the few options for a boy not born in privileged circumstances in those former times.

"His teacher convinced his parents that he should attend more than the usual 'Volksschule' (elementary school) as he was talented and should become a teacher. That meant having to pay for his education." 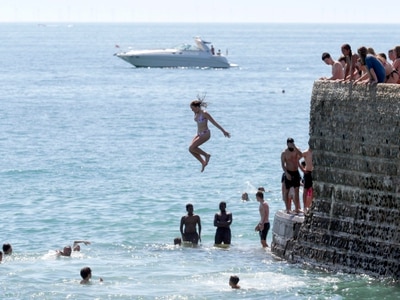 Hot and sticky nights on the way as heatwave continues

16 dead after plane skids off runway in southern India