Gruesome end for a bullet-proof rebel of the Empire 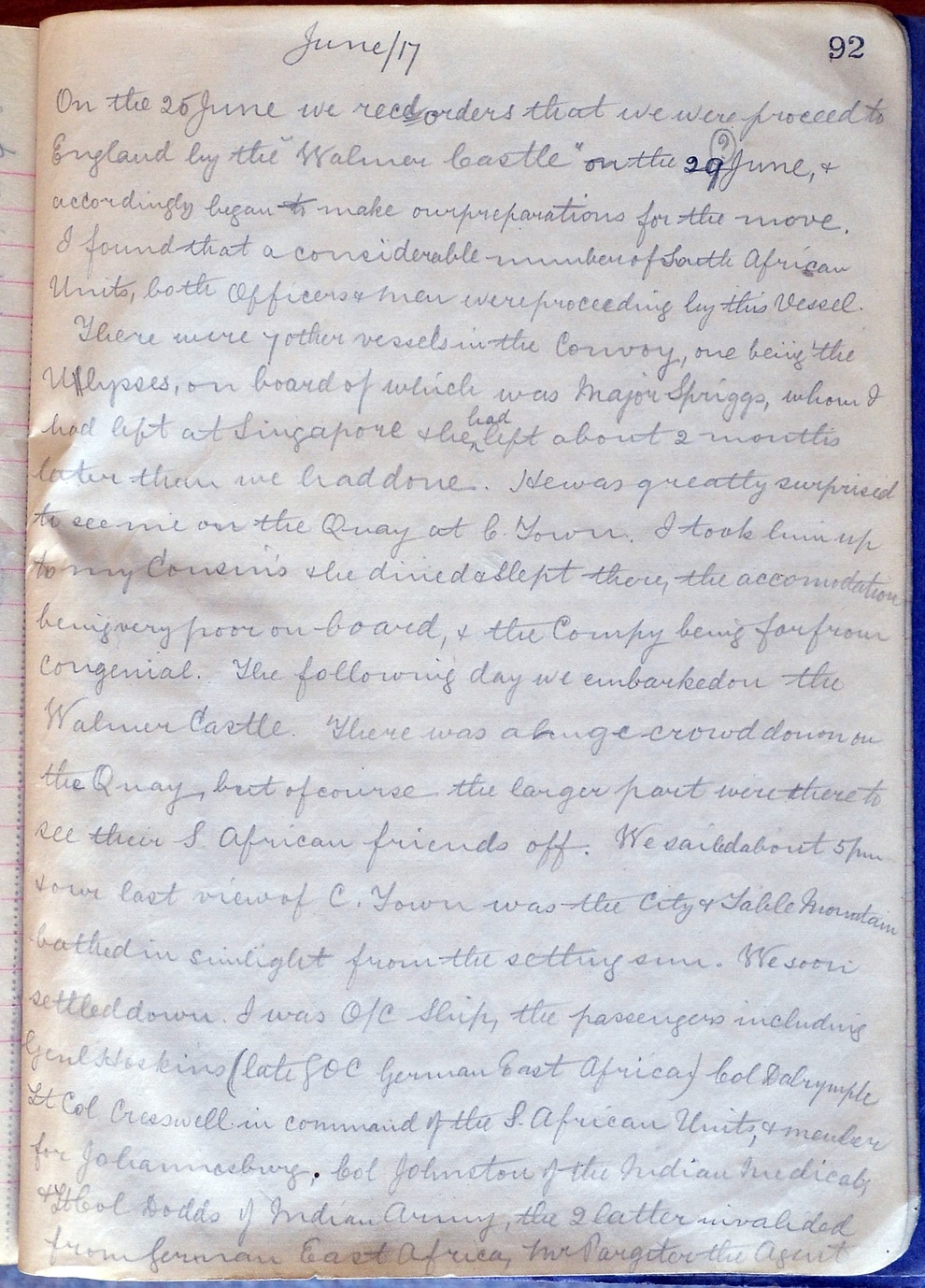 A page from the handwritten diary 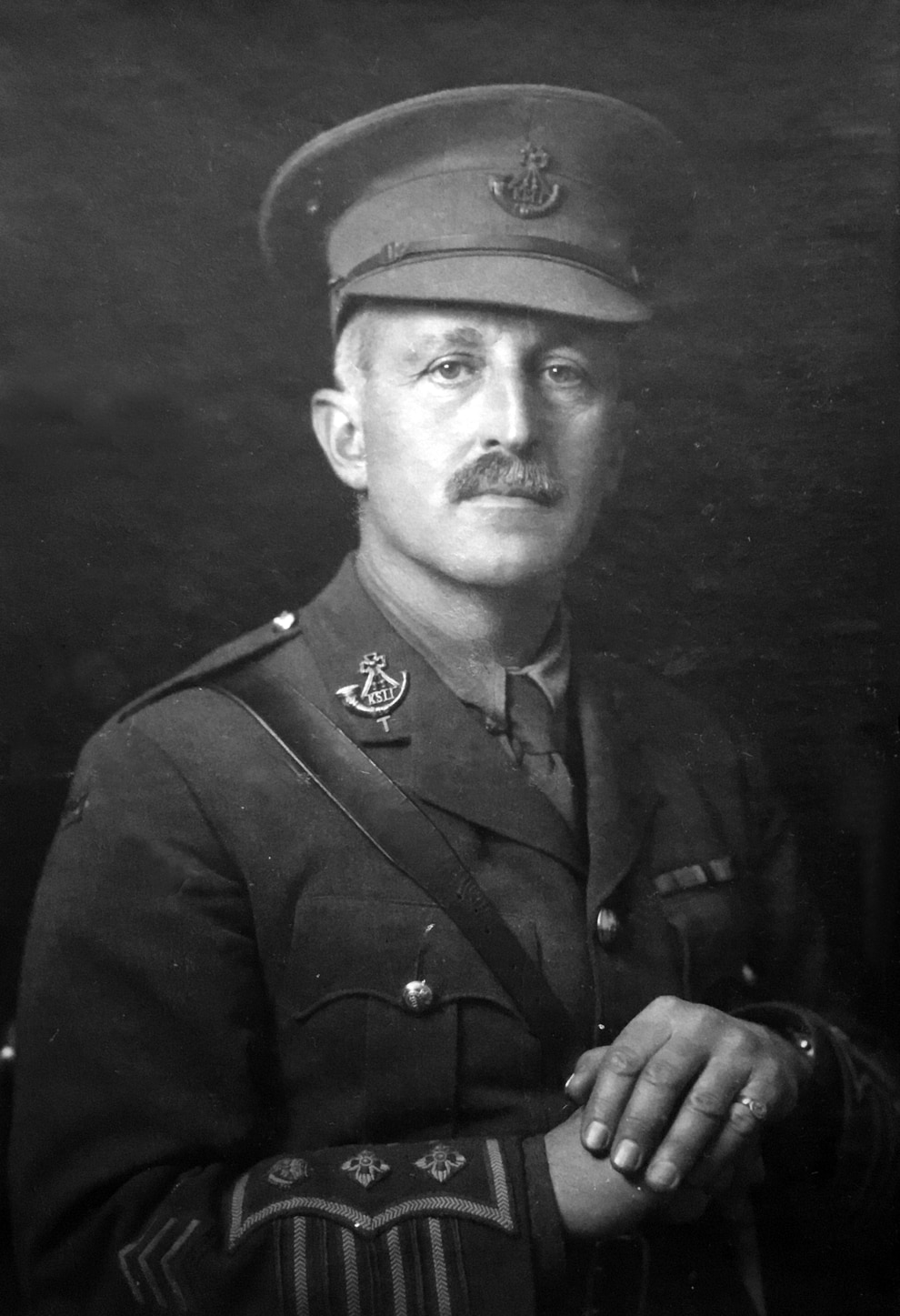 Lieutenant Colonel Arthur Garrett, who commanded the 4th Battalion of the King's Shropshire Light Infantry for most of the Great War 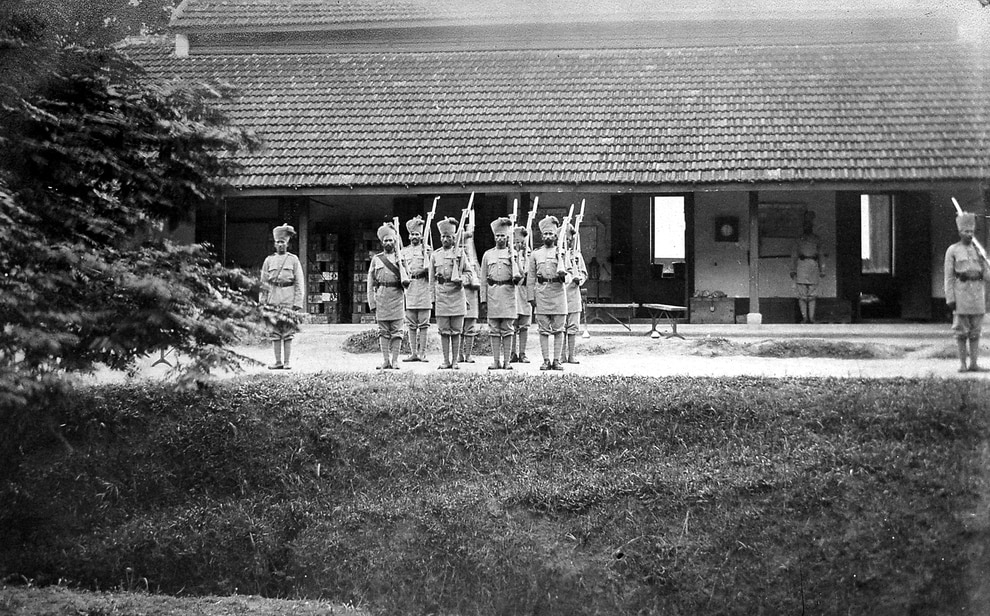 The 5th Light Infantry mounting guard at their barracks at Singapore shortly before they rose up in rebellion. This picture came from Mrs Felicity Burke, whose uncle Ern Tipton served with the KSLI in Singapore. He was killed in action at Passchendaele on October 31, 1917. 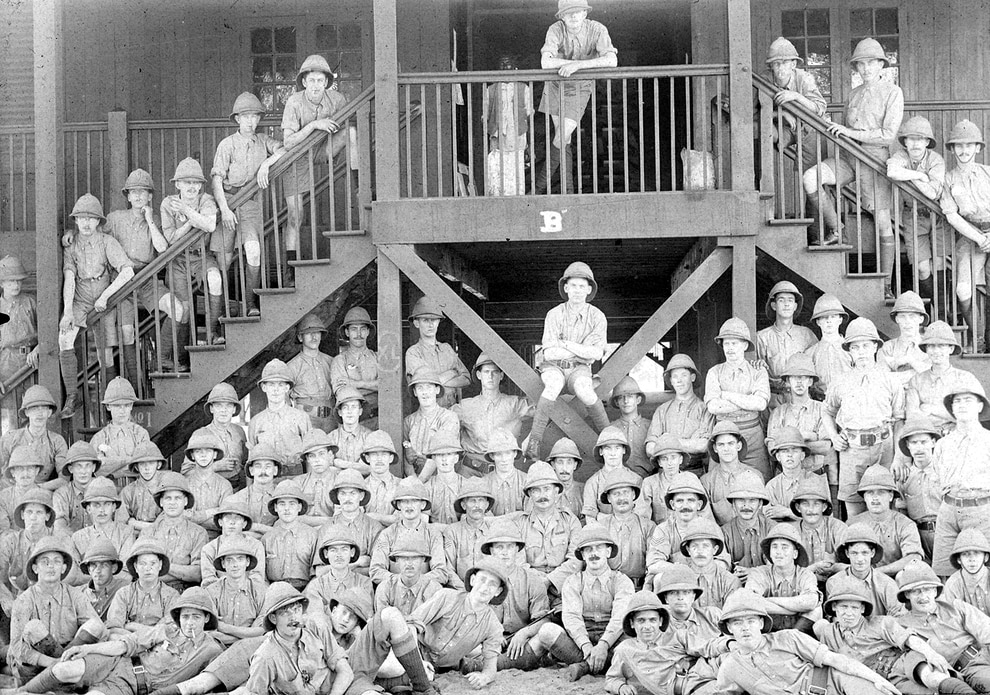 KSLI soldiers in the Far East during the Great War

As the soldiers of the Shropshire regiment headed for the Far East in the early part of the Great War, any thoughts that they were in for a quiet time were soon dispelled.

They arrived to mutiny, rebellion, and bloodshed, and the activities of rebels like the ill-fated Jho Jungnat.

The soldiers' story is chronicled in the diary of their commanding officer, Lieutenant Colonel Arthur Newson Bruff Garrett, who was personally in charge of the dozens of executions which followed, with Shropshire soldiers among those forming the firing squads.

Arthur Garrett's handwritten diary covers the period from October 29, 1914, when the 4th Battalion of the King's Shropshire Light Infantry left England, to their return on July 29, 1917, when, shockingly, despite being abroad for nearly three years, they were sent straight to the trenches of France without any home leave.

The diary is part of Shropshire Regimental Museum's collection but is held at Shropshire Archives in Shrewsbury.

That service abroad was part of a long road for the soldiers, who were Territorials typically with peacetime jobs, which climaxed gloriously in the Battle of Bligny of June 6, 1918, the centenary of which is being commemorated with a series of events in Shrewsbury next month.

For storming the hill the entire battalion was awarded the French Croix de Guerre avec Palme.

However Garrett, who was from Coalport and was known as ABG or Colonel G, had by then stepped down from command.

In the Far East the battalion was split up, and arrived to find uprisings in these parts of the Empire, the best known being that in Singapore in February 1915.

The troubles continued to rumble and Garrett records that on Sunday, May 2, 1915, as the church parade was forming up at Singapore, there came an urgent request for help from the English settlement of Kelantan, 400 miles north.

"A sudden rising of natives had taken place, Europeans murdered, and government and other buildings burnt."

A detachment of 160 KSLI troops with seven officers, and about 100 other troops, were sent by ship to the troublespot, but saw hardly any action, with only one party having been fired at at night.

"In the morning two fresh graves were found in the jungle where the firing came from, evidently the result of returning the compliment.

"All the rest of the rioters had decamped, so all that could be done was to burn down their village," he writes.

The KSLI troops returned to Singapore, leaving behind a company of Malay States Guides.

"Three days after we left the rebels tried to rush this post, but were met by a heavy rifle fire followed by a charge and fled leaving some of their number dead on the field, including their 'invulnerable' leader Jho Jungnat.

"This worthy had given out that no bullets of the infidels could touch him. To convince the populace of the error his dead body was hung up by the feet in the market place for all to see (and smell)."

This was just one of a succession of troubles encountered by the regiment.

Earlier, while they were in Rangoon, Garrett had been called to a meeting to be told that there had been a tip that the Native Infantry Regiment planned to mutiny, and he was ordered to disarm them immediately. The pre-emptive action was a success, and two of the ringleaders were condemned to death and shot.

"One peril to the Empire was averted," said Garrett.

In the mutiny in Singapore in February 1915 the Shropshires landed to help squash it.

"Abundant evidence of the mutineers' work was to be seen in various buildings of the barracks. Bullet-marked, and every here and there dark patches on the ground or floors shewed were some poor fellow had been murdered."

About 40 people were killed, he writes, but Singapore had a marvellous escape from a fearful reign of terror which he attributes in part to the actions of the Shropshires.

"On the 23rd the first of a long series of executions took place outside the jail. The writer was in command, and some 500 troops formed three sides of an open square, the prison wall being the fourth."

The prisoners were tied to posts again the wall and shot, watched by an enormous crowd. Around 40 were executed and there then followed a mopping up operation in the jungle of remaining mutineers who would never willingly surrender to the British, but would prefer to hand themselves in in such a way that a compatriot got a reward.

Garrett was in command of the last executions on April 17, 1915, when he says the crowd was bigger than ever.

He speculates that this was because a gallows had been erected, and the crowd expected to see the shooting supplemented by hanging. However, the hanging was not until later.

"After waiting in vain for the hanging the crowd slowly melted away while disappointment was plainly visible upon the faces of many of the natives."

The diary starts with the battalion leaving England from Southampton water on October 29, 1914, its strength being 30 officers and 805 men.

On their arrival back in Britain, finding that the plan was to send them to France without leave, Garrett sent a letter to the War Office pointing out they had been away for nearly three years, they had had no mail for six months "and were not aware whether our relatives were alive or dead," although Garrett did in fact know his own father had died the previous April.

However, officialdom was obdurate and the original orders stood.

"I announced the decision to the battalion, who accepted it with the fine spirit which has so marked the whole conduct of the battalion," he writes.

Garrett continued to command 4KSLI in action on the Western Front, but stepped down in March 1918 as he went on leave to England to recover from being gassed the previous year. Sadly his wife had died while he was in France.

He became a Deputy Lieutenant for Shropshire in 1923 and emigrated to Natal in 1928, aged 60, with his second wife and bought a farm. He returned to Britain in 1939 and joined the Home Guard, commanding a platoon in South Truro.

Presumably the diary was passed on, because a note with it says that it was "found amongst the effects of the late Major A.C.L.D. Lees, KSLI, and presented to the Regiment by his widow Mrs M.P. Lees, of Hinstock Court, Market Drayton, Nov. 1964."

Another note is a rejection slip from a publisher, addressed to Lt Col S.J. Furness of the 5th Battalion The Light Infantry (Volunteers) at Coleham Drill Hall. Dated July 10, 1978, the letter from William Blackwood & Sons publishers says that the diary is "rather too specialised" for their purposes, and returns the typescript.

Flower show success down the decades