BMW’s M8 Competition Convertible may look the part, but does it deliver an exciting drive? Ryan Hirons find out

Wind back to the ‘90s, and the original BMW 8 Series. That sleek flagship was crying out for a proper M treatment to make it a true high-performance coupe.

Many thought it would happen, with rumours running rampant and BMW actually beginning a project to develop such a car, though ultimately canning the M8 as a result of global financial difficulties. It would seem the BMW M8 would never happen.

Until now, that is. The German firm had no hesitation in producing a monstrous version of its new flagship 8 Series — even unveiling the car’s original concept in M form. Can the long-awaited machine establish itself as a true M legend? We find out…

Based on the new 8 Series, we’re driving the M8 here in Competition form — the only variant available in the UK — in its convertible bodystyle.

Its engine is an advancement of the 4.4-litre V8 unit found in the M850i — ramped up to produce 617bhp — while a number of adjustments have been made to the chassis to cope with the high levels of power.

Alterations have been made to the car’s ‘xDrive’ all-wheel-drive system for a more rear-biased approach too, while a small change comes in the form of the centre console-mounted M Mode button.

As mentioned, powering the M8 Competition is a twin-turbocharged 4.4-litre V8 — producing 617bhp and 750Nm of torque to make it the most powerful engine BMW has produced for its own cars. That power is delivered to all four wheels via an eight-speed gearbox.

Though power delivery is nothing short of brutal in the car, it’s more commercial plane fast than bike engine strapped to a shopping trolley. Even at higher speeds, the M8 will slice through the air like its nobody’s business and before you know it, you’re at licence-losing velocity.

Refinement across the car is so good though, you barely notice how fast you’re going. Great for those wanting a comfortable performance car, perhaps not so much if your preferences lean towards a more engaging drive.

That brutal cruiser-like performance translates much into the way the M8 drives, too. Though far form boring, it’s very clinical in the way it undertakes more spirited driving.

Monumental grip is offered by its all-wheel-drive system, with the car very difficult to unsettle through corners. A more ham-fisted approach tends to encourage understeer more than oversteer, so don’t expect extreme levels of tail-out action here.

Its more grand tourer rather than outright sports car approach does result in a car that’s remarkably comfortable at a cruise though, although it does leave  a question as to why buyers looking for something to chew miles up wouldn’t consider the cheaper M850i or even 840d — both of which offer decent performance and equal long-distance ability.

BMW M cars do tend to be more subtle aggression rather than ‘yes, I have a fire-spitting V8, get out of my way’ in terms of design, though there is definitely head-turning ability here.

Changes from the regular 8 Series design aren’t major, though there is a more aggressive aerodynamic package. The front bumper sports larger intakes, while opting for the M Carbon option puts plenty of (you guessed it) carbon-fibre bits around the outside of the car.

At the back, a quad-exit exhaust is more than a slight nod to the car’s performance — with M8 Competition badging and model-specific 20-inch alloy wheels rounding out the package.

There’s no major move away from the plush cabin found in the regular 8 Series for the M model, meaning there is still a plethora of high-quality materials and front passengers have plenty of space around them.

Some subtle tweaks are present though. Gone is the crystalised shifter from the regular car and in its place is a leather-wrapped unit with M embossed on. There’s also a host of carbon fibre interior bits, along with M logos emblazoned throughout.

It still retains the four-seat layout too – though the rear bench is best reserved for toddlers or used as extra cargo space at best. Boot space totals 420 litres — more than enough for daily use.

With the M8 Competition now sitting at the top of the 8 Series range, the list of equipment on offer is expectedly comprehensive.

Pricing for the coupe kicks off at £123,345 — and moves up to £130,435 for the convertible. That’s a pricey prospect alone, though it rises even further when ticking the options. Packs offered and previously mentioned here include the £2,095 M Driver’s package and £4,995 M Carbon exterior package.

Both of those can be had in one under the ‘Ultimate Pack’ — along with a carbon engine cover, carbon-ceramic brakes, ventilated seats, a Bower and Wilkins ‘Diamond’ audio system, BMW’s Driving Assistant Professional suite and it’s bright ‘Laserlights’ tech. This commands a £20,000 premium.

Placing the BMW M8 between high-end sports car and grand tourer is something of a blurred line. On one hand, it delivers its performance in a brutal way — but doesn’t quite offer the delicacy and poise of say, a Porsche 911.

Though as a grand tourer, it’s impressively refined and exceptionally comfortable. However, those wanting this over an 8 Series may be better off saving some cash and opting for an M850i.

It has carved itself a bit of a niche between the two though. If the idea of a cruiser with the ability to flip a switch to turn on near-supercar performance appeals, the BMW M8 ticks that box.

LETTER: More important than ever to take care of your eyes 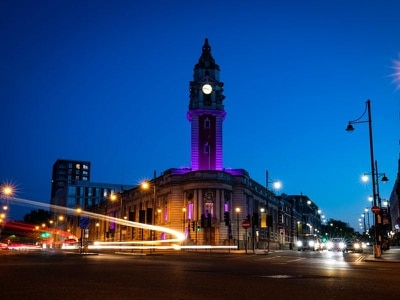