The inside story of Telford's iconic statue

A top landscape architect who helped create the look of modern Telford has told the "inside story" of Telford Square – and its iconic Thomas Telford statue. 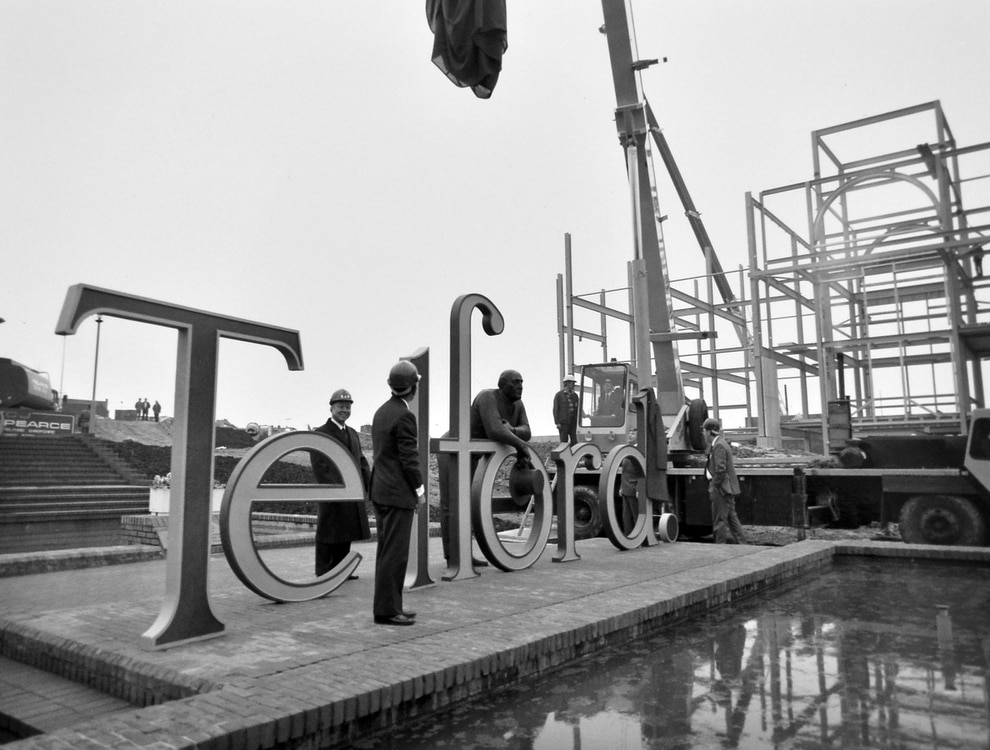 The unveiling on April 8, 1988. The covering has just been lifted by a crane operated by Mr Bill Francis, president of the Institution of Civil Engineers, of which Telford was the founder president. Just behind the 'e' is Dr T.S. Lin, president of Tatung, who had come from Taipei for the occasion. Tatung were one of Telford's leading employers and Dr Lin had translated Thomas Telford's autobiography into Chinese. 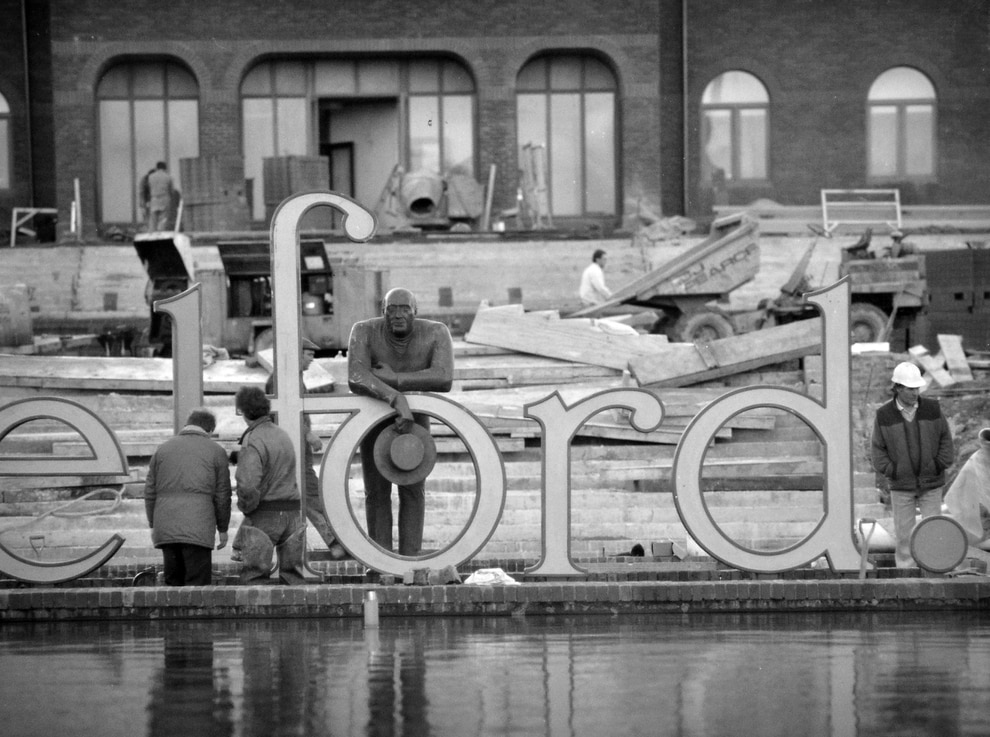 The sculpture being fixed in place in late March 1988 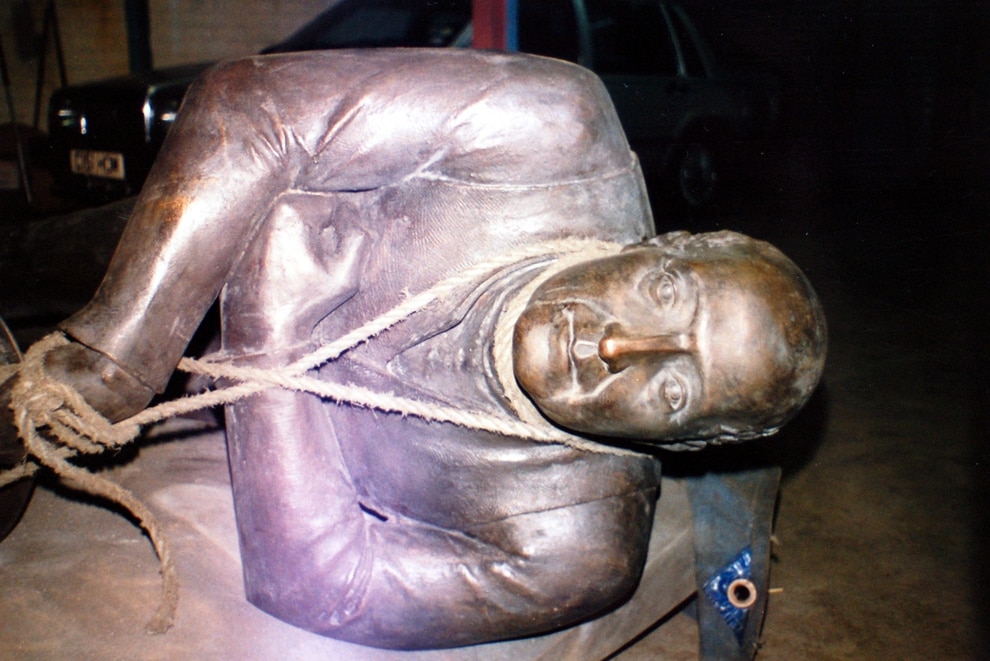 The statue, comprising a figure of Telford leaning on the letters of his name, and the square itself, was unveiled in 1988. Now, 30 years later, it has undergone a revamp for the town's 50th anniversary.

Allan Howard, of Harley, near Much Wenlock, was invited along to switch on the fountains to officially mark the completion of the project.

Allan was head of landscape design for Telford Development Corporation from 1982 to 1988 under chief landscape architect David Wassell, and at the start of the project Allan's job was to allocate it to one of the eight landscape architects in the team, choosing John Lomax.

"The area between the buildings, some under construction, was a barren slope rising up from the box road underpass. It was rough, very uneven and without promise. There was nothing much to guide design; an almost blank canvas. Access to adjoining buildings had to be provided and that was about it," recalls Allan.

"Sometime prior to September 1984, Joe Boyce, the corporation's general manager, commissioned a sculpture to commemorate the 150th anniversary of the death of Thomas Telford on September 2, 1834. He asked David Wassell to administer the commission, and the job came to me as I had some experience in this area.

"The key decision to locate the sculpture in Civic Square, as it was then called, was David Wassell’s which he remembers well."

"John designed a dramatic setting for Andre Wallace’s first submission to the corporation board. This showed Thomas Telford standing by the rising chains of the Menai Bridge, the first suspension bridge in the world, placed on a pyramid of circular steps, which placed the piece against the sky from the lower approach to the square.

"It was not to be. The work was rejected by the board and Andre was given two weeks to come up with another proposal. He was disappointed and puzzled. He had hoped that the image would have rivalled that of Isambard Kingdom Brunel standing by the chains of the Great Eastern.

"What followed was a completely different location for the sculpture. As it was now known that Andre was proposing large letters for Telford with a standing figure close by, John proposed that the piece should be placed in relation to his proposed water cascade and pool. This was a very bold move. It may be that the pool represents a canal, canal building being one of Thomas Telford’s achievements along with roads and bridges.

"Meanwhile Andre’s efforts to juggle with the letters did not satisfy him, so he turned his attention to the head of Telford. He examined all the painted portraits which existed in London, none of which satisfied him. He finally based the head on a bronze bust in the reception area of the Institution of Civil Engineers in Parliament Square.

"Andre’s next move was a stroke of genius resulting in a piece of sculptural drama. In the finished work it appears that Telford has walked on from stage right, taken off his coat, hung it on the ‘D’ and then leant over the ‘O’ to contemplate the town named after him. It was a change from the ordinary to the exceptional.

"I acted as messenger and facilitator. I have photographs of the emerging Thomas Telford in wire and plaster taken in Andre’s Cable Street studio in the East End with full size plywood and cardboard letters. These were later beautifully made in wood by Glynwed Foundry in Telford who then made the letters in cast iron.

"The leaning figure of Telford is in bronze and is about eight feet in height so as to make it look life size. The largest letter ‘T’ is around 3m in height and the word Telford is about 8m in length. This is a confident and enigmatic piece of work.

"At this stage John Lomax would have then designed every detail that is now visible, and then put the job out to contract – I cannot remember who the contractor was. Everything, I believe went according to plan except that I remember exceptionally hard rock was encountered during the construction of the pool.

"When the sculpture was unveiled on April 8, 1988, three years and seven months late, the coat certainly fooled the BBC cameraman who thought it was real. As the shroud was craned off he swore and shouted ‘somebody’s left their coat on the ‘D’.

"It may be that there are very few places, if any, where a major piece of public art has actually determined the shape and form of the place where it stands. This is a story of two very creative people being able to express themselves within a supportive background authority.

"Also, the fact that the square has been so carefully and expertly restored shows how successfully it has retained its place as a centrepiece of Telford Town Centre." 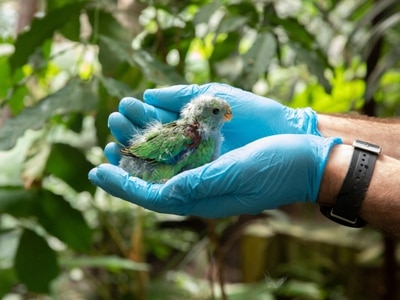