A new campaign will be launched next month to raise awareness of Ellesmere Library in its new location.

It follows concerns that some people think the town no longer has a library after its former home was shut down two years ago and has since been sold.

Now volunteers are preparing to hit the town with leaflets in a bid to ensure that everyone knows the service has moved to the former Cottage Hospital in Trimpley and is part of the Our Space community centre.

Kate Westgate, member of the Friends of Ellesmere Library committee, said: "The library used to be in a much-loved building, Fullwood House in Victoria Street.But in June, 2017, it was forced to move because of cuts by Shropshire Council.

“Fortunately, Bethphage, a non-profit social care charity, based in Shrewsbury, stepped in, took over management of the library and moved it to the old Cottage Hospital nearby, where it also runs a day care centre and facilities for young people with learning difficulties.

“But it’s surprising how many people are still unaware of the change and think the library doesn’t exist anymore. We want to put out a strong message that it’s still very much part of our community, in a lovely new space where lots of exciting things happen.”

The campaign starts on July 7 when a team of volunteers will be handing out flyers at Ellesmere Regatta.

Volunteers were told about the campaign at a library event to celebrate Volunteer Week, which included a talk by local historian Alison Uttingt who has been researching the story of Eglanyne Jebb - founder of Save the Children.

She said: "It's particularly fitting that we are here in what used to be the Cottage Hospital, because it was built and paid for by Eglantyne;s aunt, Louisa Jebb, who is one of my favourite characters in the Jebb family story.

"The whole family did great things for the community, just as these wonderful volunteers do.

Before Alison’s talk, The Friends of the Library presented a £150 cheque to Corinna Jebb, chairman of the Ellesmere and District fundraising branch of Save the Children and wife of Eglantyne’s great nephew, Lionel Jebb.

The money was raised at a World Book Night event in May when award-winning author Clare Mulley gave a presentation on Eglantyne’s life, based on her biography, The Woman Who Saved the Children. 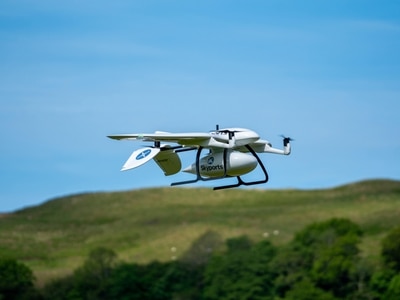