A Shropshire stalwart who still lives independently in the town she was born in 100 years ago was able to celebrate with her family at a safe distance.

Caroline Hull, née Ankers, enjoyed a socially distanced party with her family after lockdown restrictions were eased though they exercised caution.

Caroline, known as Carrie, was born in Market Drayton in June 1920, at Clive Road, and today lives a stone's throw away at Normanbrook Court.

Her younger brother Fred joined the army and fought in Italy in the Second World War, where he died in combat.

Carrie herself also helped the war effort, working with the RAF as a civilian at their base at nearby Buntingsdale Hall.

She also worked intermittently at a bookmaker's, though in the years following her marriage to Cyril Hull in 1942 she focused on raising their two sons, Terry and Derek.

Cyril died in 1982 and Terry sadly died at the age of 46. Carrie eventually returned to the bookmaker's where she would continue to work a few days a week well into retirement age.

For her birthday, Carrie, Derek and his wife Barbara gathered with Terry's daughters Jacqueline, Karen and Alison at Alison's home in Market Drayton.

They listened to wartime music and enjoyed each others' company from a distance.

Carrie said: "We sat on Alison's front lawn, we sat at our own tables because we had to be apart. We had a lovely buffet and a glass of wine and a cake.

"Alison did me proud, very proud. It was a great day."

Carrie was pleased to see her family properly, having been stuck at home almost half a year after an operation in February.

"I've been very unhappy, I've been in since February because I had my cataracts.

"Because of the lockdown I couldn't have my hair done, I looked like a right you-know-what.

"[For the birthday] we had it all planned, going out for a meal and going out with my friends, but we couldn't do it.

"All my friends have been to see me, they come to my window and shout at me.

"I would like to thank everybody for being so kind to me for my birthday."

She wouldn't accept presents and instead asked for donations to the Severn Hospice – in all she raised £400. 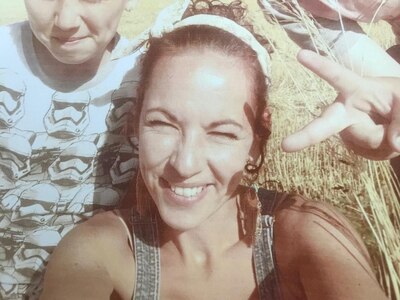