More than 1,000 men queued up a Bridgnorth street on a dark, cold Halloween night not for the promise of treats but for potentially life-saving tests.

The Bridgnorth Lions Club organise a mass prostate cancer screening every year at Castle Hall, and every year hundreds of the town's over-50s line West Castle Street and wait patiently for their test.

This year the screening fell on October 31, and 1,111 men had their blood screened for prostate-specific antigens (PSAs).

Some waited for the best part of an hour, but the process itself only takes a few minutes. Volunteer nurses set up in Castle Hall for hours on end and greeted hundreds of men each before taking a sample of their blood.

Some of the nurses even dressed for the occasion, wearing devil horns and face paint.

Mike Bradbury, 75, and David Blount, 71, socialised over a beer after having their tests done.

"These nurses give their time for free," Mr Bradbury said. "They come off a day of work to do this, that's good.

"I think it's very important honestly. A lot of GPs don't do the screening even when asked."

Mr Blount said: "We waited the best part of an hour – it's nothing, is it?

Hazel Gregory is a registered general nurse who works at Bridgnorth Community Hospital by day.

She spent her Halloween night screening, and was full of praise for the Lions who organise the event.

She said: "We're supporting the Lions because they in turn support the population of Bridgnorth and the surrounding area.

"Local businesses support it, they encourage their workforce to come to the screening.

"They're quite happy to wait outside on a horrible night.

"Our waiting room [at the hospital] never looks full after seeing them all here.

"Hopefully it will give men peace of mind but also pick up some that have a problem."

Analysis of the samples will be carried out by a retired consultant urologist, David Baxter-Smith, and the Graham Fulford Charitable Trust.

In two to three weeks, the men who attended the screening will receive a letter with one of three colours on it – green, amber or red.

Green indicates a healthy level of PSAs; amber an abnormally high reading that should warrant further tests; and red a dangerously high level of PSAs. The letters advise of any suggested further action.

Prostate cancer screenings are currently unavailable on the NHS. A health service website says: "There's currently no screening programme for prostate cancer in the UK. This is because it has not been proved that the benefits would outweigh the risks.

"PSA tests are unreliable and can suggest prostate cancer when no cancer exists (a false-positive result).

"Furthermore, up to 15 per cent of men with prostate cancer have normal PSA levels (a false-negative result), so many cases may be missed."

Chris Aked of the Lions Club explained that even though the screening isn't completely reliable, it will give an early warning to some of those men who need it.

He said that every year, five per cent of the men who get tested at Castle Hall learn they have prostate cancer as a result.

"We were delighted that the event continues to attract such numbers. It has been confirmed as the largest single PSA screening in the country this year.

"We started early because we had some nurses arrive early. We weren't due to start until 6.30pm but we started about 5.15.

"People come early and it's a recognition that people value what it is.

"It's remarkable; so many men have realised that this is something that they must do. People in Bridgnorth are very smart."

The Lions Club spend about £17.50 for each man that gets tested, and spend much of the year raising money and publicising the prostate screening. 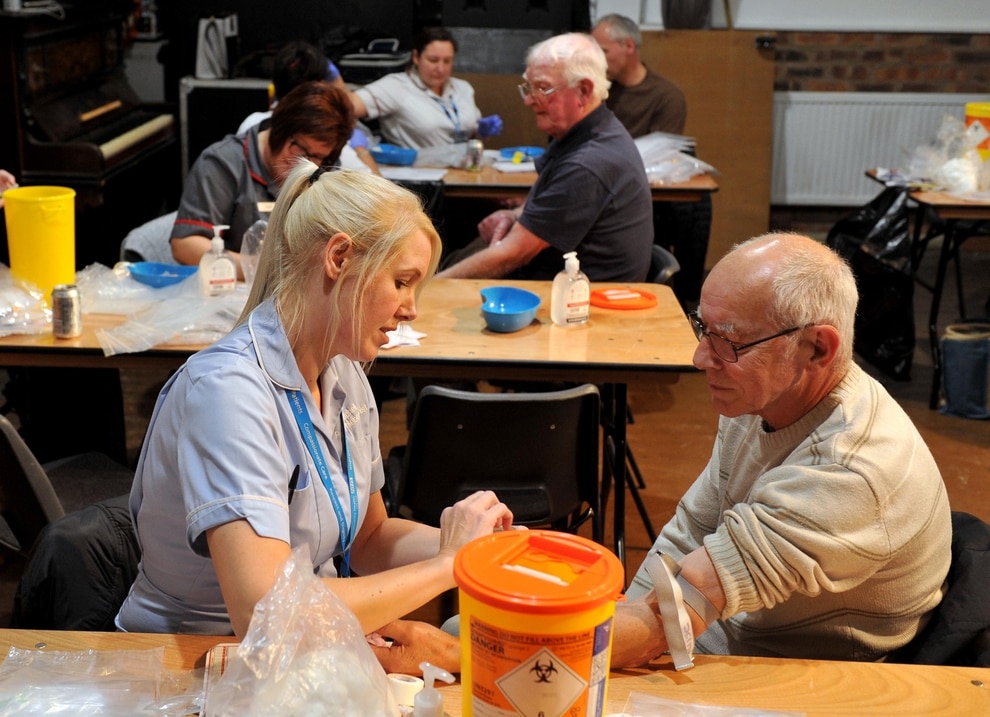 A man being tested 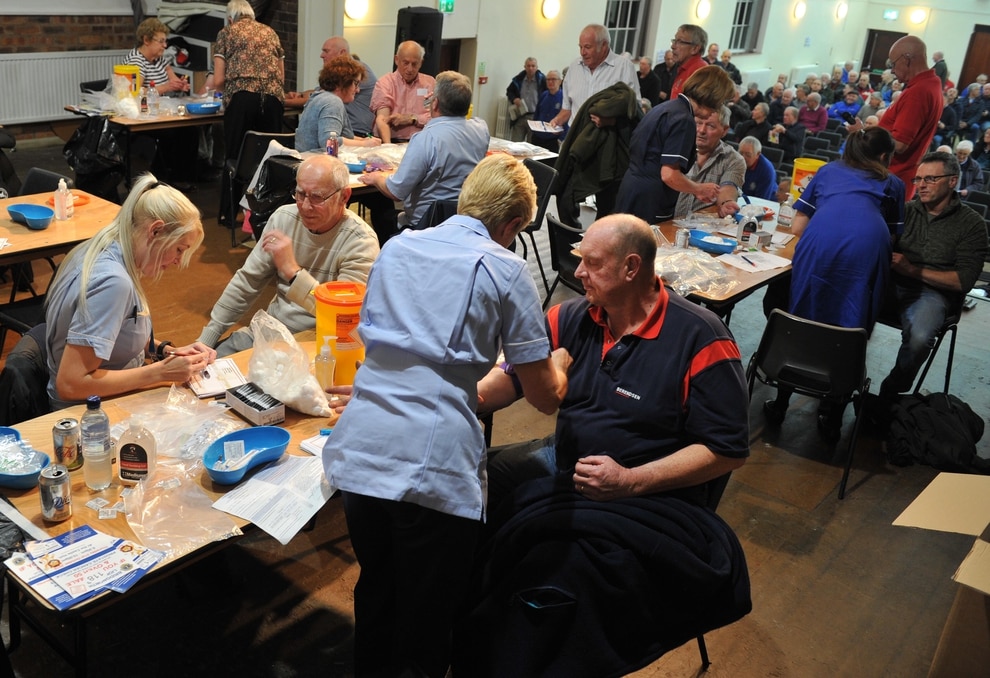 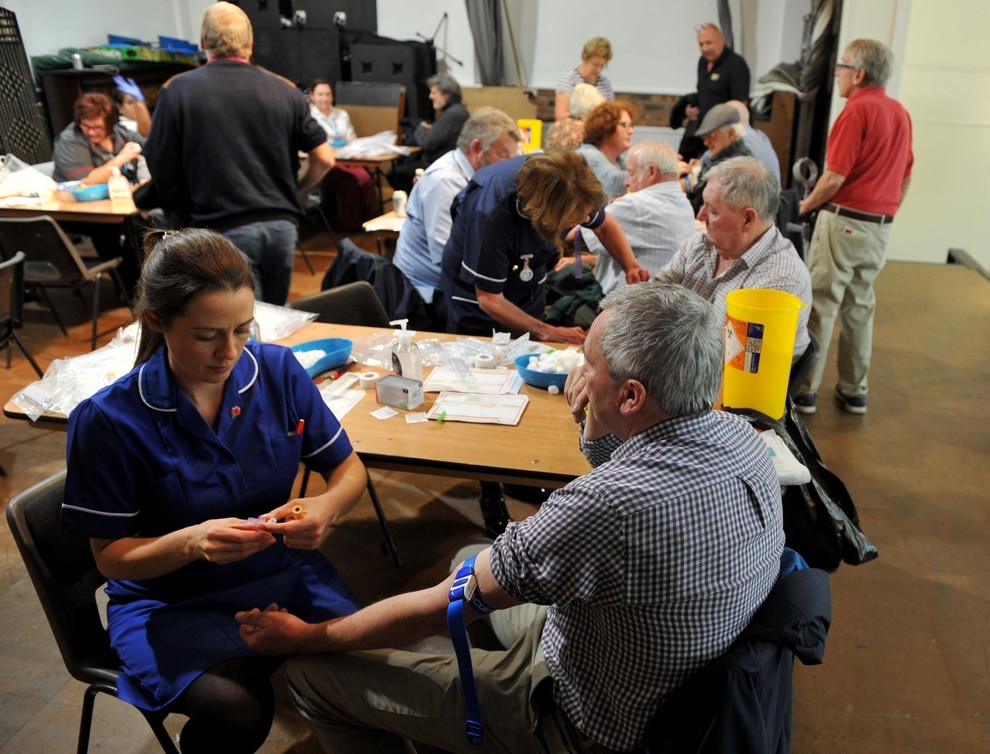 Tests being carried out 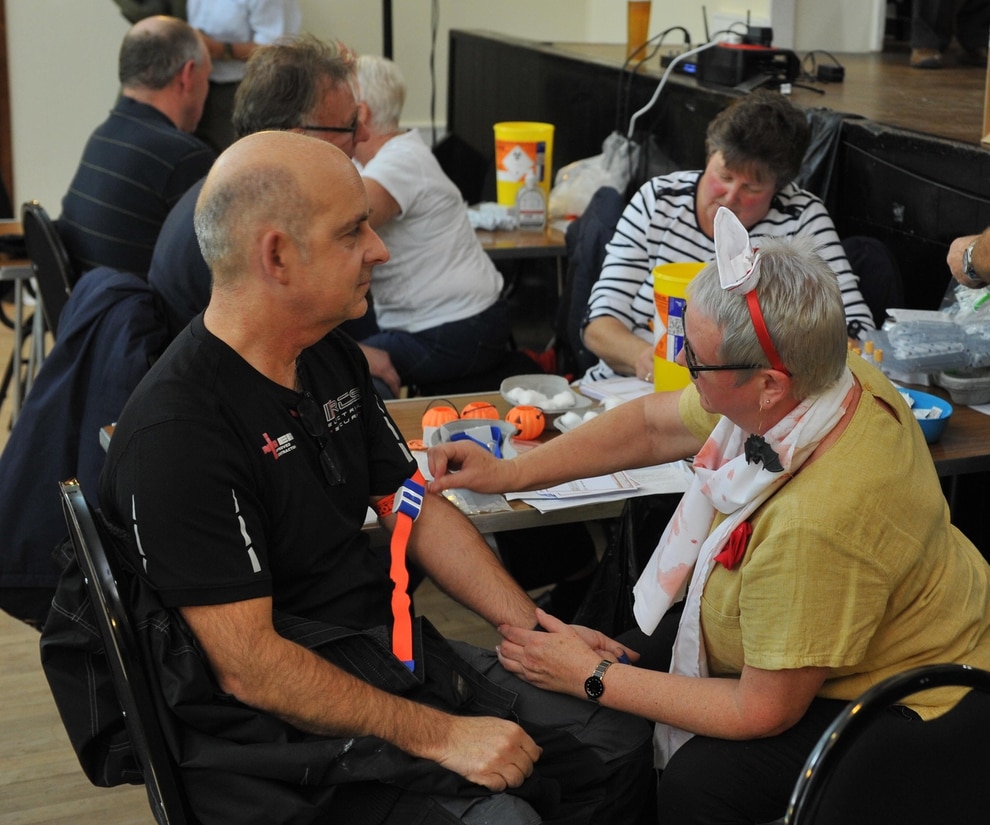 Two men came to join the queue at about 7pm.

Shaun Denny of Bridgnorth came along for the first time after seeing an advert. He said: "I got a leaflet through the door, [I thought] why not?

"I'm a gentleman of a certain age."

Gary Barfoot of Dudley was also a first-timer. When he turned up at Castle Hall and saw the hundreds of men in the street he was taken aback.

"They were collecting for money a few weeks ago, I put some money in and the chap said 'why don't you come along?'

"I thought I'd come here and get it done, fingers crossed everything is okay but best to get checked.