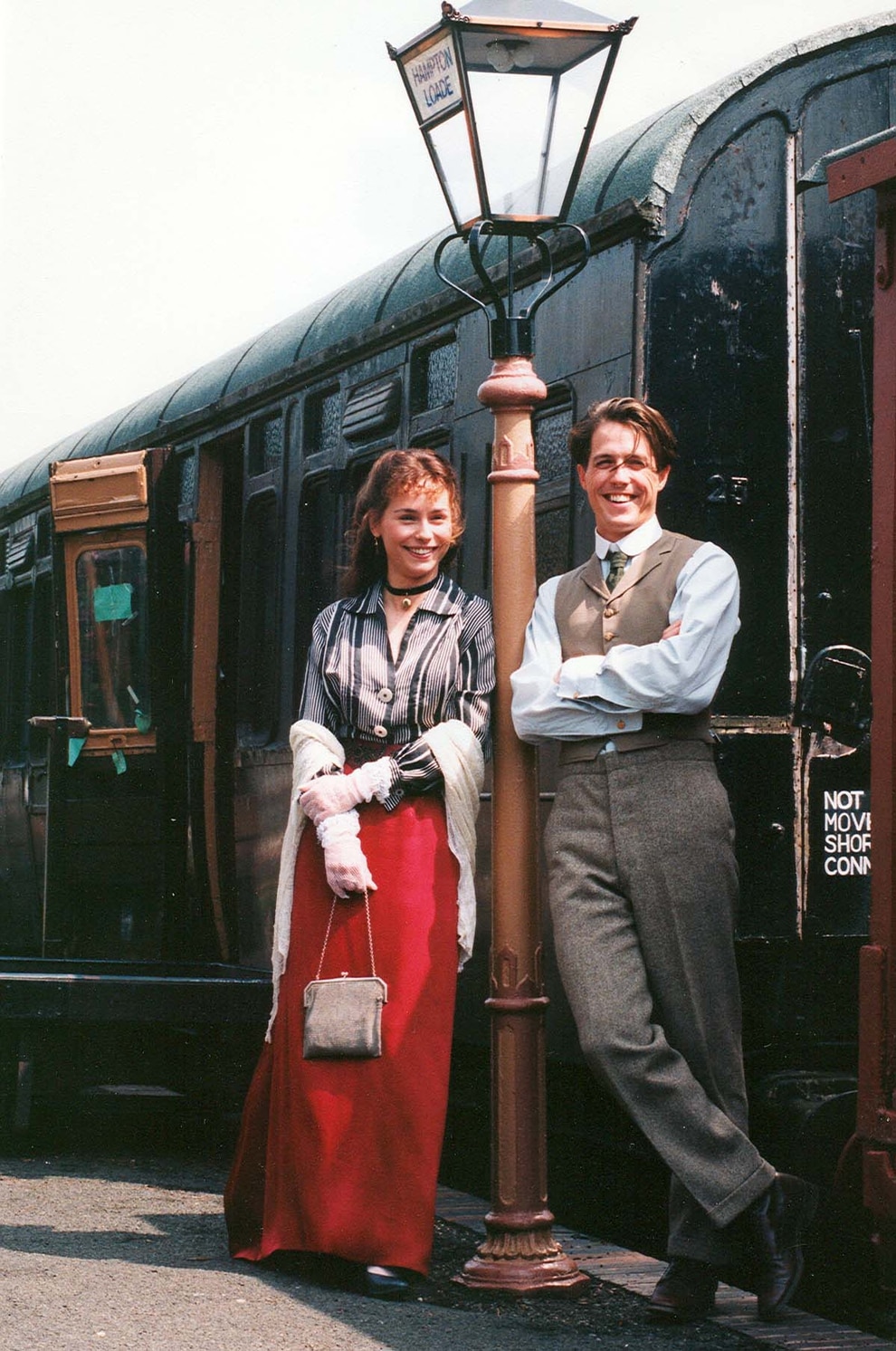 Tara Fitzgerald and Hugh Grant posing for a press shot on Hampton Loade station during a break in the filming. 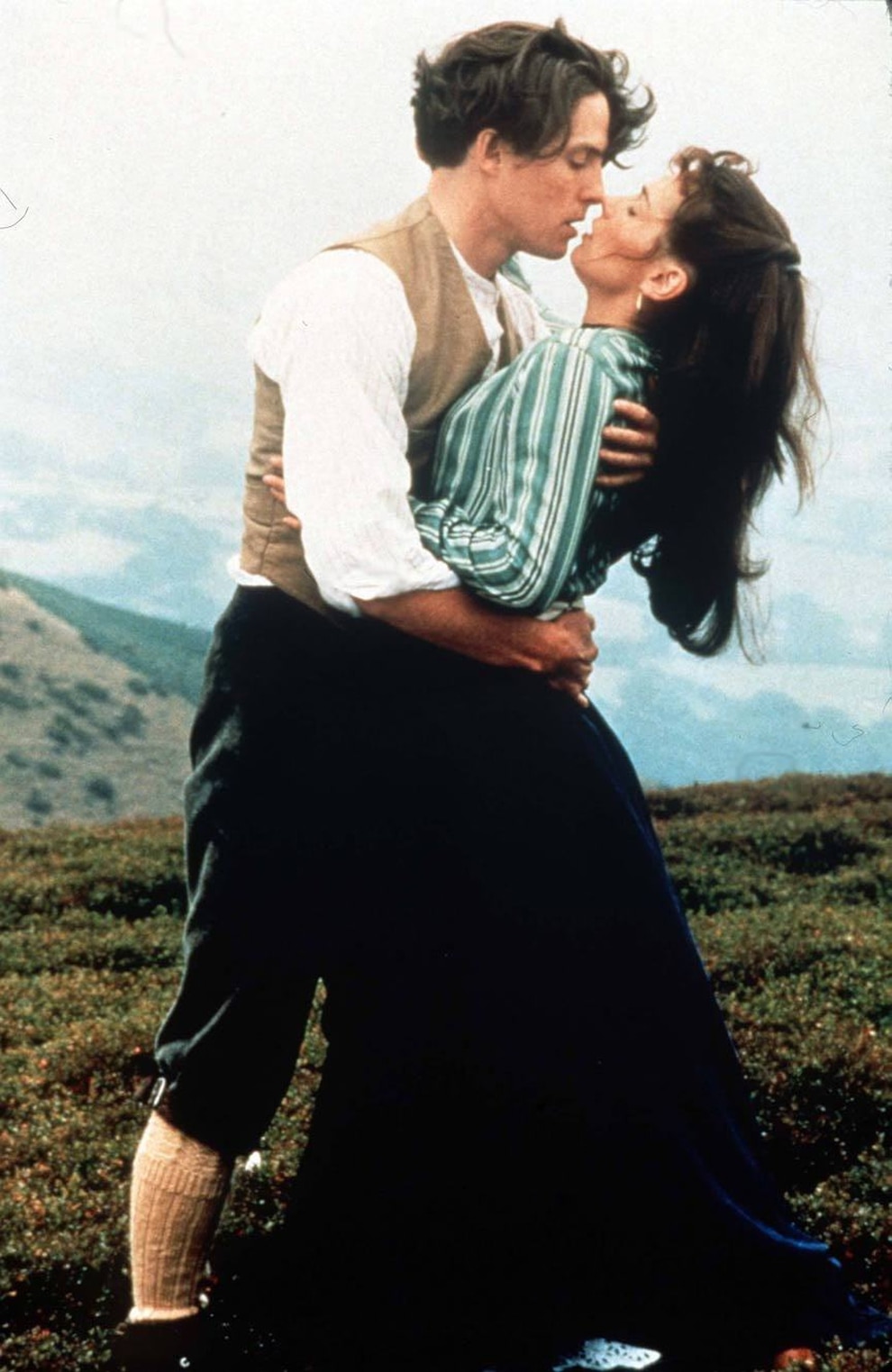 Love on a mountain top for Hugh Grant and Tara Fitzgerald. 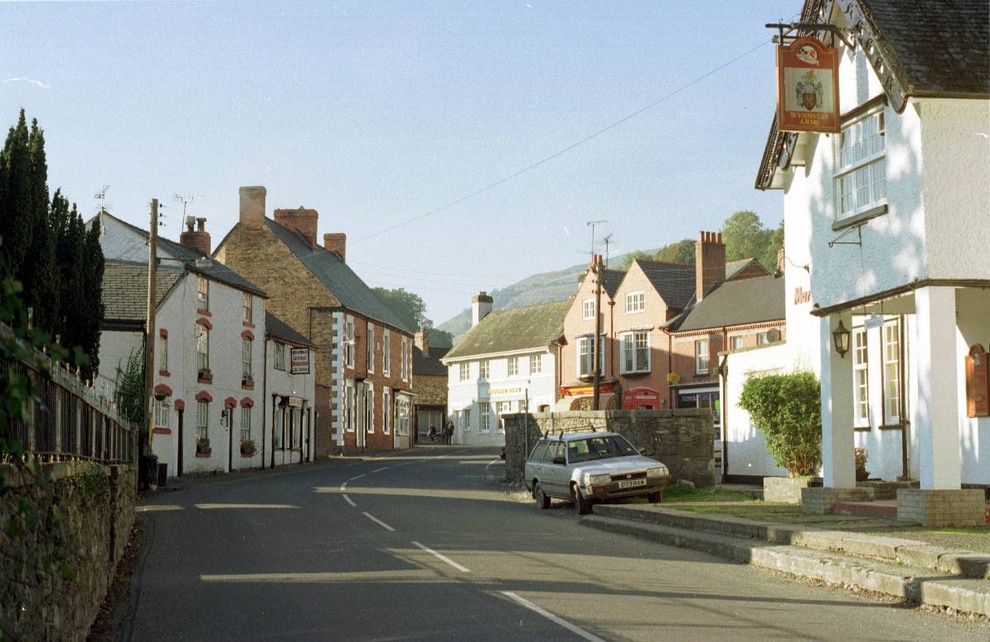 Llanrhaeadr shortly after the filming. Many locals were extras in the movie. 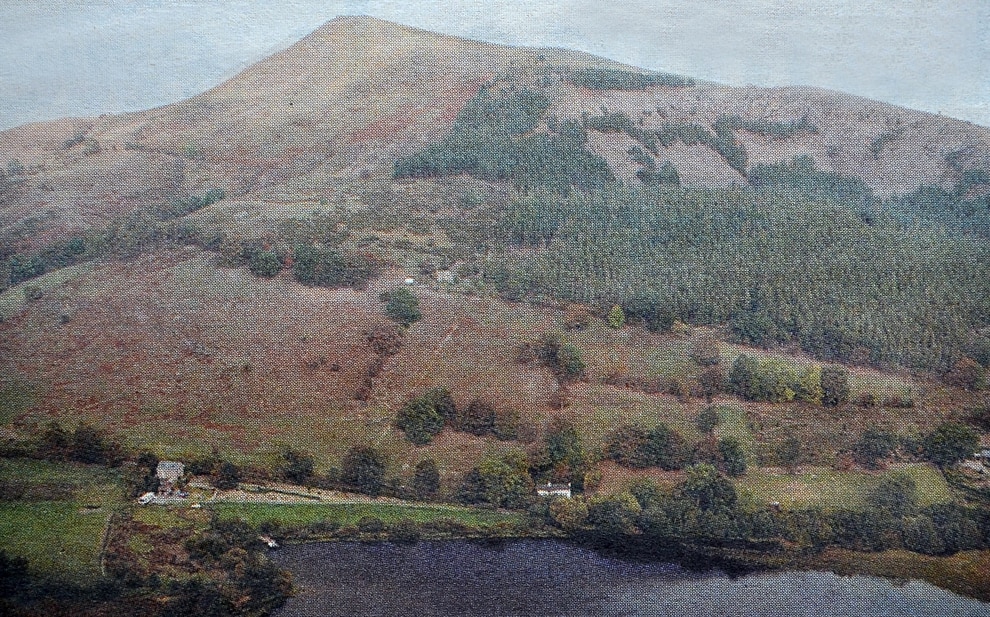 Gyrn Moelfre was one of two mountains to take the "central role" in the movie.

Actually, they need not have bothered.

Gyrn Moelfre, between Llanrhaeadr and Oswestry, is over 1,500ft high, making it a mountain, not a hill.

But in a whimsical movie in which it played the central "character," the whole premise of the plot was that it was only 984ft, so just shy of 1,000ft.

On the arrival of English mapmakers, the Welsh villagers are mortified by the prospect that the cartographers will class their local landmark as a hill, so they add some extra feet to the summit to take it to 1,000ft to ensure it gets mountain status.

That film, starring Hugh Grant, had what must be one of the longest titles in movie history – The Englishman Who Went Up A Hill But Came Down A Mountain.

It was set in 1916 or 1917 and location filming was done in July and August 1994 both in Shropshire and in and around Llanrhaeadr-ym-Mochnant, west of Oswestry, which played the part of the fictional Welsh village.

Hampton Loade railway station on the Severn Valley Railway masqueraded as the village station, and has a small but significant part – after the mapmakers' car breaks down the villagers conspire to prevent them catching a train because they want to buy more time to build up the height of their hill/mountain.

Dozens of Llanrhaeadr's villagers got the chance of a part in the movie, including Mrs Browen Jones, who said: "I did spend a couple of days as an extra.

"They used two hills for filming, one at Penybontfawr, between Llanrhaeadr and Llangynog – I don't remember the name of the actual hill – and The Gyrn at Moelfre, near Llansilin, for some scenes.

"I don't know why. Why do film companies do these things? I think possibly The Gyrn was more accessible. There were certainly better views from there. I think the final scenes were filmed on The Gyrn, although I'm not certain.

"A group of people locally arranged a reunion last year because of the 25th anniversary of the film. There was quite a big event in the village, although I couldn't attend myself. I think one or two actors turned up, but not Hugh Grant.

"He was about the village quite a bit during the filming. At the time we ran the local newsagents shop, right on the village square, and so quite a few of them popped in and out, and I have a feeling he did come in.

"I was an extra. There was a scene in the chapel where I was part of the congregation, and another carrying buckets of soil up the hill to build the mountain, that particular scene being at Penybontfawr. I was in that but I think it ended up on the cutting room floor, although I have spotted myself in the other scene filmed inside the chapel.

"That was filmed at the tabernacle chapel in the village. It's no longer a chapel now, it's a private house."

During filming camera crews and location staff stayed at local inns and hotels, although Grant and co-star Tara Fitzgerald stayed a little further afield at the picturesque Lake Vyrnwy Hotel.

The movie was a low-key hit with critics, with comments like "an amiable comedy in a quaintly English tradition,” and “a charming piece of work.”

So many locals wanted to see themselves on screen that it had an extended run at Welshpool's Pola cinema.

Two years after its world release, villagers were to have their own local premiere, when Walt Disney's European director agreed to supply a wide-screen version of the film for the community's festival, showing at the village's community hall.

A twist following the filming was that Grant had some fence-mending to do with the Lake Vyrnwy Hotel after private jokes during his six-week stay there somehow found their way into the press.

He wrote a gracious letter of apology – which was accepted: "When I stayed at the Lake Vyrnwy Hotel this summer I am very sorry to say that I sometimes referred to a (very nice) male member of staff as 'The Breather' and to a (very delicious) vegetable dish in the restaurant as 'Farmers Underwear'. Both jokes were childish but were meant to be private and not all mean-spirited."

He added that he was deeply ashamed that the jokes had been distorted and caused hurt to staff, and added: "I retain a very fond memory of the hotel and of all the warm, welcoming staff."

Did we help Nazi bomber escape after Shropshire air raid?